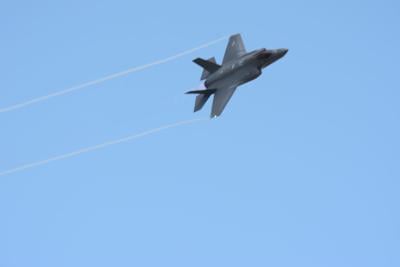 Madison appears ever so close to landing a squadron of F-35 fighter jets to replace the aging F-16s that Truax Field has hosted for decades.

That’s good news for the economy and for keeping the 115th Fighter Wing. The military base on the city’s North Side delivers about $100 million in annual economic impact and provides emergency services for commercial aircraft at the adjacent Dane County Regional Airport.

The Air Force last week released a final report on the potential impact of the F-35 jets while continuing to peg Madison as its top candidate among five sites for “the most advanced fighter aircraft in the world.” The Air Force is expected to announce a decision this spring.

The new report dispels one of the most provocative fears raised by critics in Madison: that the military jets could carry nuclear weapons. The report makes clear the F-35s will not have that capability.

“Only units with a nuclear mission are provided the hardware necessary to carry nuclear weapons,” the report states. And “none of these five alternatives have a nuclear mission.” Even if fitted with upgrades, any F-35s in Madison “still would not be nuclear-capable,” according to the report.

The F-35s will be loud when they take off and land. But so are commercial aircraft. And commercial planes account for the vast majority of flights in and out of the airport.

The F-35s will be similar in volume to today’s F-16s, which are three-decades old and being retired. The final report reassures that “minimal to no requirement for afterburner use” is being considered. Afterburners increase noise on takeoff.

The report and a letter from the Air Force to U.S. Sen. Tammy Baldwin, D-Madison — who supports the F-35s coming here — suggests an increase in flights is expected while pilots are being trained on the F-35s. But after training is done, the number of flights would fall closer to what occurs now.

Critics stress, and the final report confirms, that low-income neighborhoods with children will be disproportionately affected by the new fighter jets near the airport. But that’s already true of the F-16s, and it’s true of commercial aircraft. Homes and apartments tend to be more affordable near airports because of the noise.

The final impact report estimates more than 1,000 households near the airport could experience higher daily noise averages above the level at which people tend to be disturbed. These homes may need sound proofing, and some property owners worry they won’t qualify for federal assistance to insulate living spaces.

If property owners are impacted by significantly louder noise from the F-35s than they already are accustomed to, then local governments should help if the federal government won’t.

Keeping the fighter wing and its significant economic impact — plus new construction work and jobs — will be worth it.

The jets also help protect the Midwest. They patrolled the skies during the Sept. 11, 2001, terrorist attacks, for example, and have served overseas.

Madison, we hope, is about to get the F-35s, keeping the 115th Fighter Wing here where it belongs.

EDITORIAL: A call for civility amidst protests

Free speech and demonstrations are fine, but not reckless threats of violence

EDITORIAL: American leadership is as indispensable today as it was for victory in Europe 75 years ago

We need to learn the lessons of history, and remember the price of freedom

EDITORIAL: If the pandemic-preparedness cupboard was bare, it was Trump's doing

Woe is Donald Trump. The long-suffering, misunderstood president just can’t make the world understand what a raw deal he got. The pandemic was…

The COVID-19 pandemic has set loose winds of change at universities and colleges across the country, and it could reshape the face of higher e…

OUR VIEW: Public health during a pandemic is too important for political games

OUR VIEW: Joe Parisi must be willing to ease restrictions if rest of state keeps virus at bay

EDITORIAL: Legislators need to help the unemployed, not point fingers

There are many people in Wisconsin who were put out of work through no fault of their own by the COVID-19 pandemic. As we’ve reported, there a…