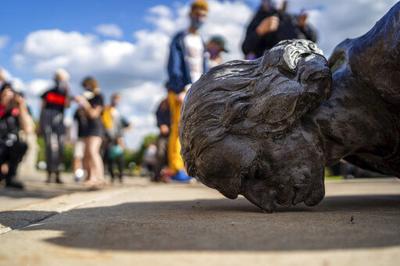 Christopher Columbus did not set out to prove that the world was round (educated people had proven the flat-Earthers wrong centuries earlier). He was not the first European to cross the Atlantic (that title goes to Norse Viking Leif Eriksson). And he never, ever — not once — set foot on what is today the United States of America. He didn’t even make it to the North American continent. (He landed on a Bahamian island during his famous 1492 journey.)Even the story of his ship names is false: The Niña and the Pinta you were told about in school? Really the Santa Clara and the nobody-remembers-anymore, but definitely not “Pinta,” which was a nickname bestowed on the boat by “salty sailors,” according to History.com, that meant “painted one” or “prostitute.”

Those are the myths that have long been perpetuated about the Italian master navigator, who might not even have been Italian. Theories are out there that he was Portuguese, Spanish or possibly even Scottish.

Vel Phillips statue a powerful idea for Capitol grounds. But return Heg and 'Forward,' too

Now here are the realities: Columbus indeed charted a path leading to European colonization of the Americas. And he absolutely terrorized the Taino people indigenous to the Caribbean. He and his men killed them, abducted them, enslaved them, raped them, chopped off their hands for not delivering gold dust on demand and — according to a firsthand account by Bartolomé de las Casas, a participant turned repentant Dominican friar — “grabbed suckling infants by the feet and, ripping them from their mothers’ breasts, dashed them headlong against the rocks.”

Likewise, there are some myths and realities we should discuss about the protesters who tore down the Christopher Columbus statue near Baltimore’s Little Italy neighborhood and chucked it into the harbor. Those who consider them an un-American angry mob might want to take another look at history themselves: Tearing down symbols deemed offensive is something of a patriotic tradition in this country, going back to the birth of our independence.

Two-hundred-forty-four years ago, a New York City crowd that included some of Gen. George Washington’s troops got so worked up after a reading of the Declaration of Independence that they collectively marched toward Broadway and ripped down a 2-ton statue of King George III that had been erected six years earlier, according to a piece in National Geographic magazine. Eventually, the British coat of arms was pulled off a courthouse as well, a stone pediment with the same symbol destroyed and the king’s portrait set on fire.

Of course, we are not in any way advocating a repeat of the events of July 9, 1776 — or July 4, 2020, for that matter. As General Washington noted, advising his troops to stay away from such scenarios in the future, defacing property in such a way gives “the appearance of a riot, and want of order.”

While we may understand and even embrace the rationale behind the recent action in Baltimore, we don’t condone the act itself. It was not heroic. It was dangerous and inflammatory. The marble statue was dedicated 36 years ago on the false premise, inscribed on its base, that Columbus was the “discoverer of America.” But it was not posing an immediate threat to anything other than our collective sensibilities. Toppling it could have killed someone. There’s a process that should have been followed to initiate its removal safely, legally and promptly.

No, our hope here is to bring some perspective to such deeds and the words now surrounding them.

The demolition of the statue undoubtedly felt good in the moment for those participating and is hardly unique to Baltimore. Columbus was beheaded in Boston, ripped down in Minnesota and tossed in a lake in Virginia. But just because everyone’s doing it doesn’t make it right, and the action here also offended Italian Americans who saw it as an affront to their heritage and dismissal of the discrimination they’ve faced as a group through the years. They absolutely should have been consulted in crafting a solution here. ...

The statue toppling has also been picked up as a talking point by Republican Gov. Larry Hogan who appears to be equating it, somewhat ridiculously, with violent crime in the city. And it feeds into the phony narrative President Donald Trump is spinning about a “left-wing cultural revolution.”

It also redirected what should be a conversation about historical accuracy, inhumanity and how to achieve an equitable future to one chiefly focused on symbols and their worth. In other words, it’s become a distraction to the cause.

But that’s not just the fault of those who took the statue down. It’s also the fault of those who didn’t recognize where the demands for change rocking our country right now were headed. Philadelphia leaders got it: Mayor Jim Kennedy launched a public process three weeks ago to figure out what to do with that city’s Christopher Columbus statue on South Broad Street — before residents felt so unheard that they had to take matters into their own hands.

Baltimore should take note. This has been an issue for years, with Native Americans long decrying such statues, not to mention the federal holiday, as offensive and asking for relief. It’s time to listen. There are other statues still standing. We should take a proactive, public approach to their future, rather than waiting to react to the inevitable. That’s not giving in to ultimatums set by protesters, that’s just smart governance — and a recognition of today’s truth, which has been too long in coming.

Those of us in Generation X, and in the generations before, didn’t throw “gender reveal parties.”

Senate Democrats have blocked the Republicans’ long-delayed plan for additional coronavirus aid, raising the prospect that Congress will provi…

OUR VIEW: The Madison City Council must do more to help smashed and looted stores

Kenosha cops weren't wearing cameras. Neither do Madison police. That needs to change.

OUR VIEW: Body-worn cameras are key to seeing what really happens