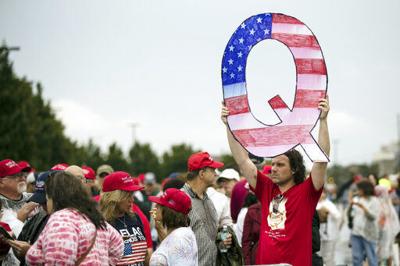 Twitter announced last month that it had removed thousands of accounts spreading messages about QAnon. Days later, TikTok blocked hashtags that corresponded to QAnon videos. And early this month, Facebook removed a QAnon group with 200,000 members. All of which led many Americans to ask the question: What on earth is QAnon?

Unfortunately, this question isn’t so easy to answer. QAnon is a conspiracy theory involving a “deep state” of child molesters (and child-eaters) who worship the devil and run this country’s most powerful institutions. It originates with an anonymous persona called Q who claims to possess a top-level security clearance used to access government secrets about a vast left-wing plot against President Donald Trump. Yet from there, the theory has sprawled across the Internet, offering various versions of differing degrees of bizarreness luring the susceptible reader down a rabbit hole — and tempting the outside observer to ignore the wackiness altogether.

Except, ignoring QAnon isn’t an option.

Not only has QAnon led to intense online harassment of innocent parties, and not only has it led to physical violence, but Americans also can’t ignore QAnon because adherents to some form of the theory may soon represent them in Congress. More than 60 candidates this fall have expressed their sympathies with the cause. Fourteen have clinched a place on the ballot. Trump himself has been known to retweet QAnon-adjacent content, and last week, when he was asked about the phenomenon, he sidestepped the inquiry. This sent believers into paroxysms.

5,000 reasons a month to give to the United Way

That QAnon is tiptoeing ever closer to the political mainstream is only one of many challenges for social media sites. These sites can’t ignore QAnon, but neither can they simply ban it — not really. Platforms tend to prefer to focus on behavior rather than content, so they have ready-made recourse in their terms of service when they want to act against manipulation of algorithms or tactics such as “swarming” (systematically attacking targets of the conspiracy theory for, say, being baby-eaters).

When platforms do focus on content, they are far more likely to act when there is a risk of real-world harm. QAnon has caused real-world harm, surely. But not every post related to the theory runs that risk, and swinging the moderator’s mallet could needlessly squelch speech — perhaps fueling the same accusations of a scheming liberal conglomerate that are the movement’s raison d’etre. And even if platforms did decide QAnon as a whole was too much of a menace to countenance, they’d run into trouble determining which posts qualified.

QAnon is poised to act as a test case for the convoluted rules and enforcement apparatuses social media sites have developed over their years-long shift toward taking responsibility. These technology companies will need to navigate the labyrinths they themselves have constructed. They should also explain to the rest of us the routes they are taking.

All the while, they’ll confront a quandary entirely out of their power to resolve: The president isn’t an accidental beneficiary of these conspiracy-mongers. He is egging them on.

A nurse at the Irwin County Detention Center in Georgia, which houses migrants detained by Immigration and Customs Enforcement, filed a whistl…

OUR ENDORSEMENT: Joe Biden is the better choice to restore, unite America