EDITORIAL: Stop the senseless violence Downtown, and put the statues back up
comments
Share this 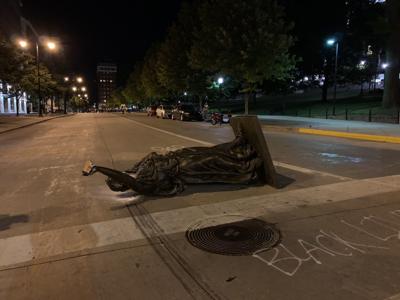 Stop the senseless violence Downtown. A mob of people punching and kicking state Sen. Tim Carpenter, D-Milwaukee, outside the state Capitol on Tuesday night was a disgraceful attack on an elected official and our democracy. The perpetrators must be investigated and prosecuted.

So should anyone who carries a baseball bat into a Capitol Square restaurant, yelling through a bullhorn and intimidating patrons. “I’ve got a bat,” the 28-year-old man warned random diners Tuesday, before police say he resisted arrest and fled from a police car.

Put the statues back up. Protesters who we thought stood for racial equality and an end to police brutality Tuesday night pulled down two prominent symbols of progress and sacrifice. The beloved statue “Forward,” at the State Street corner of the Capitol Square, has long inspired our state to improve. The sculpture of a woman extending her arm in the air has come to represent women’s rights.

On the opposite side of the Square, facing King Street, the statue of Hans Christian Heg honors an outspoken abolitionist and Wisconsin Civil War hero who gave his life to end slavery. He also was a prison reformer.

Both statues were toppled by misguided vandals. Both must be restored and go back up.

State Street businesses were just starting to open after months of closure due to the coronavirus pandemic, followed by mass protests over the horrific police killing of George Floyd in Minneapolis. The protests were justified and mostly peaceful. They helped lead to murder charges against the officers involved and prompted a national discussion and legislation to improve law enforcement. They have built momentum for real change.

But looting and smashing stores on State Street — some of them owned by people of color — was wrong weeks ago. So was the violence and destruction Tuesday night. Beating up a state senator (and gay rights leader) won’t further the goals of justice and equality. Nor will starting fires, trashing the state Capitol, threatening random people with violence or toppling monuments to noble causes.

That won’t improve Madison’s or Wisconsin’s terrible disparities along racial and economic lines. And it won’t make law enforcement or our community more open and fair.

Terrence Floyd continued: “So let’s do this another way. Let’s stop thinking that our voice don’t matter and vote … because it’s a lot of us, and we still going to do this peacefully.”

Madison and Wisconsin have a long way to go to improve society for all. Violence and destruction will only slow progress.

OUR VIEW: Biden won, and honorable leaders across the political divide in Congress must say so