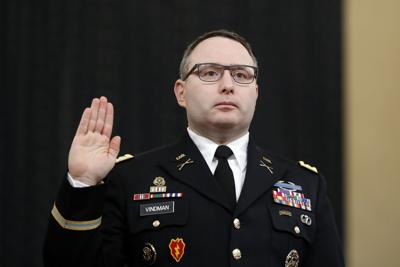 At his post-acquittal address at the White House last Thursday, President Donald Trump told congressional impeachment allies that “you develop friendships and relationships when you’re in battle and war.”

A day later, a decorated Iraq war veteran who had actually been to battle — and received a Purple Heart for his heroics — Lt. Col. Alexander Vindman, was vindictively fired by the commander in chief.

Vindman didn’t do anything wrong. On the contrary, he did everything right when he truthfully testified about what he witnessed as the top Ukraine expert at the National Security Council. And Vindman’s brother, Yevgeny, who had also risen to lieutenant colonel and similarly served on the NSC, was also fired even though he had nothing to do with the impeachment process.

“I have dedicated my entire professional life to the United States of America,” Vindman said in his opening statement to the House Intelligence Committee last November. “As a young man I decided that I wanted to spend my life serving the nation that gave my family refuge from authoritarian oppression, and for the last 20 years it has been an honor to represent and protect this great country.”

Too bad that kind of protection wasn’t reciprocated by the president or the sycophantic senators and representatives eager for an unrepentant Trump to tout their role in defending the president and even denigrating some of the officers and envoys who did their duty by testifying to the truth.

Not that GOP lawmakers were incapable of intervening. But not on behalf of Vindman. Instead, some senators (including U.S. Sen. Ron Johnson, R-Oshkosh) reportedly did so for Gordon Sondlund, the political appointee named ambassador to the European Union, whom Trump also fired on Friday. Sondland, a major GOP donor who had contributed $1 million to the presidential inauguration fund, was directly involved in Trump’s efforts to pressure Ukraine’s president to announce an investigation into Joe and Hunter Biden.

“We followed the president’s orders,” a sincere-sounding Sondlund said during his testimony. “Everyone was in the loop.”

Alexander Vindman knew this loop was wrong and did his duty in saying so. For that he was dismissed from the NSC. While he will retain his rank and return to the Pentagon, the words of Defense Secretary Mark T. Esper rang hollow, if not worthless, when he said of the firing, “We protect all of our persons, service members, from retribution or anything like that.”

Trump breaks his promise by piling up debt

A more accurate account was offered by Alexander Vindman’s attorney, David Pressman, who said that the officer spoke publicly only once, under subpoena, “And for that, the most powerful man in the world — buoyed by the silent, the pliable and the complicit — has decided to exact revenge.”

In his statement, Vindman said that “my simple act of appearing here today, just like the courage of my colleagues who have also truthfully testified to this committee, would not be tolerated in many places around the world” — including, he added, Russia. Reassuring his father, Vindman concluded: “Dad, my sitting here today, in the U.S. Capitol talking to our elected officials is proof that you made the right decision 40 years ago to leave the Soviet Union and come here to the United States of America in search of a better life for our family. Do not worry, I will be fine for telling the truth.”

He wasn’t. Instead, in a shameful day for the country he served, the commander in chief and “the silent, the pliable and the complicit” let America down.

Gov. Evers should understand that, like other outdoor activities, golf can responsibly continue

After we saw toilet paper and sanitary wipes disappear from our grocery shelves overnight with the coronavirus panic, this probably shouldn’t …

EDITORIAL: Trump's implacable ego gets in the way of fighting an implacable foe

America’s wartime president, Donald Trump, appears to have a 15-day attention span when it comes to combating the coronavirus pandemic. Weary …

OUR VIEW: Keep it up, Wisconsin, and double down on social distancing to save lives

Don't wait. Get your absentee ballot now to vote April 7