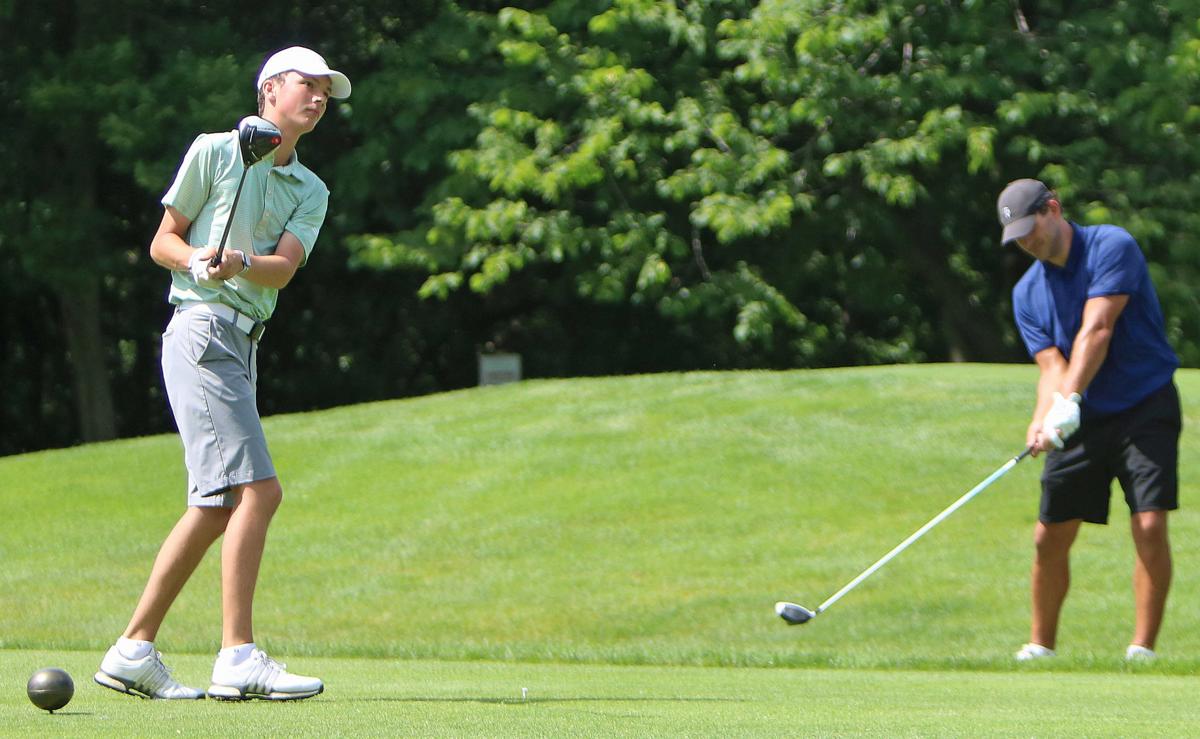 Beaver Dam High School 2019 graduate Zak Kulka (left) tees off on No. 16 at Riverside Golf Club in Janesville as Tony Romo warms up next to the tee box during the final round of the 72-hole Ray Fischer Amateur Championship on Sunday. 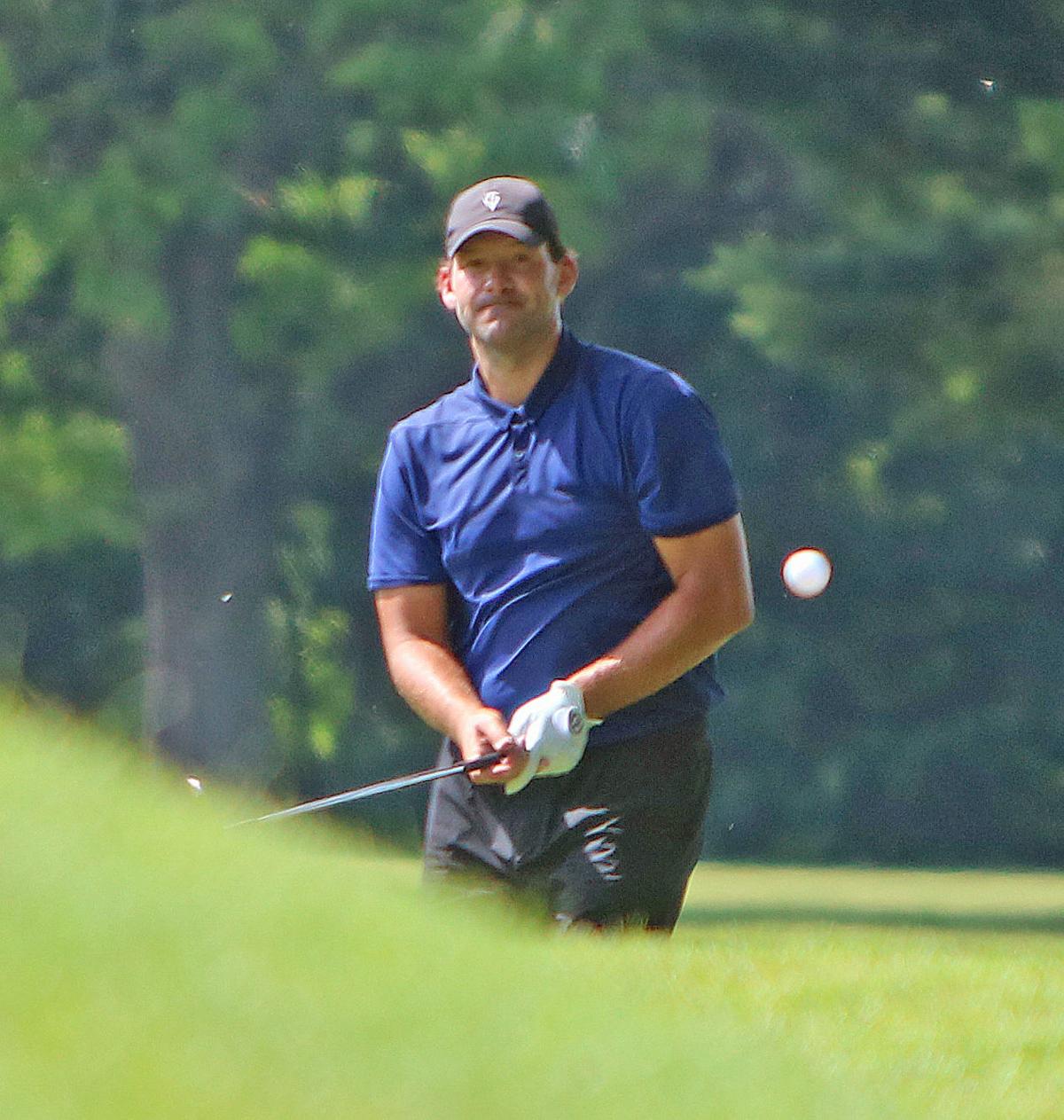 Tony Romo chips on the 17th green at Riverside Golf Club in Janesville on Sunday during the final round of the 72-hole Ray Fischer Amateur Championship. 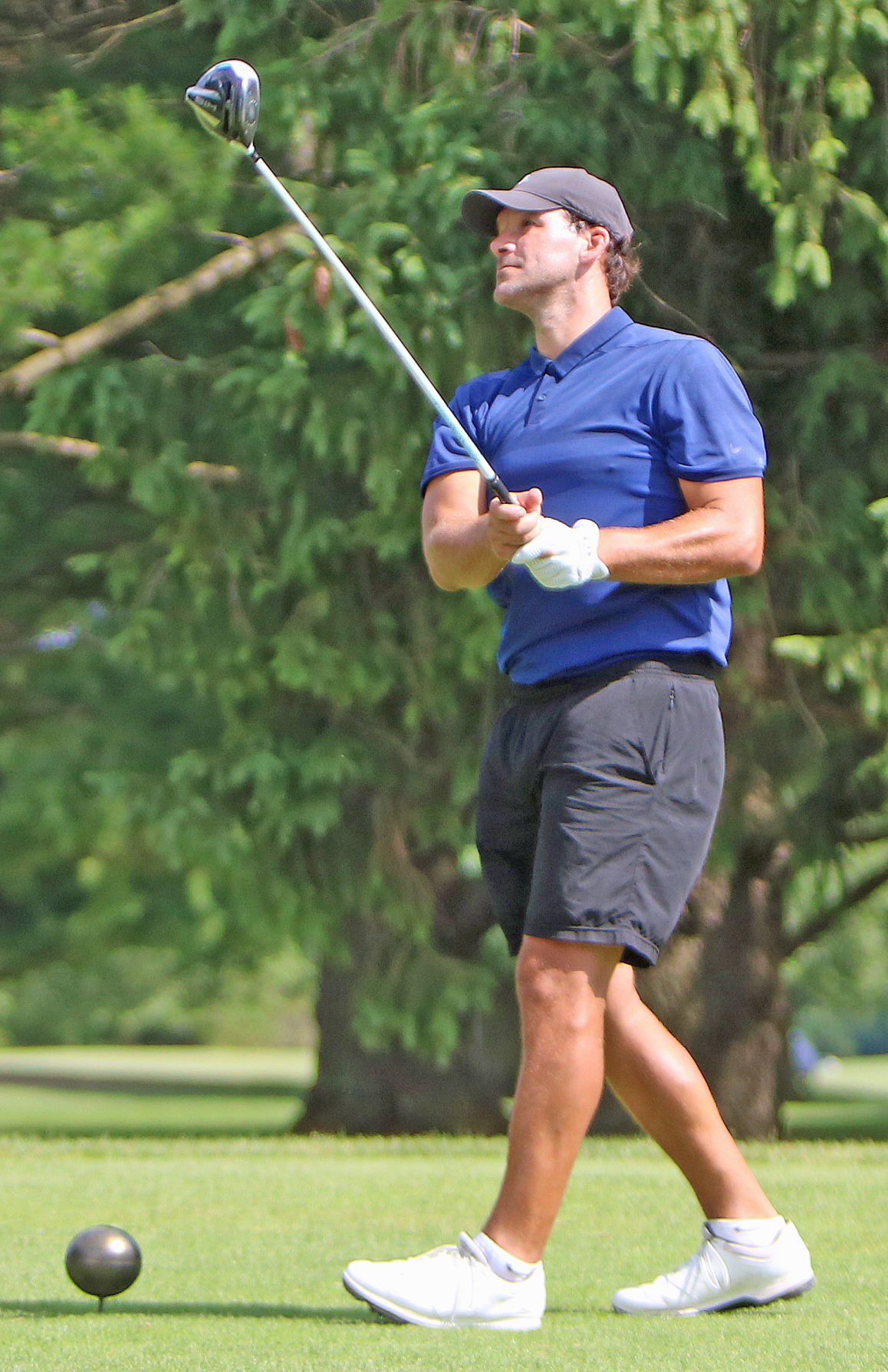 Tony Romo tees off on No. 17 at Riverside Golf Club in Janesville on Sunday during the final round of the 72-hole Ray Fischer Amateur Championship.

Considering that he was sniffing a top-15 finish with a white-hot start to the third round, it wasn’t exactly the end to the tournament he was hoping for.

But he did get paid a pretty big compliment before packing up his bags and heading home.

“You’ve got a really nice swing,” his playing partner told him after they turned in their scorecards.

That playing partner was none other than Tony Romo, the former All-Pro quarterback for the Dallas Cowboys who is currently CBS Sports’ lead NFL broadcast analyst.

“That’s pretty fun to hear,” said Kulka, who is coming off his freshman year on the UW-Green Bay men’s golf team. “But I just think of him as a regular guy — try to. Try not to get in my own head at all.

“He was really nice — he was fun to play with. I enjoyed it.”

Kulka said he had a pretty good idea he would be paired with Romo — R.J. Schwalbach of Downers Grove, Ill., was the third member of their group — after both made the cut following Saturday’s second round close together on the leaderboard.

And that was, indeed, the case. But excited as Kulka was at the opportunity, he had business to tend to.

He started the day at 3-under after a 1-under 71 in round one and a 2-under 70 in round two, and he made a quick climb up the leaderboard in round three with a birdie on the par 3 12th hole and an eagle on the par 5 14th to get to 6-under for the tournament through five holes on Sunday.

Kulka treaded water the rest of round three but a double bogey on the par 4 ninth dropped him to 4-under. And he couldn’t regain momentum in round four, posting a 4-over 40 through the first nine holes to drop to even par. He did, however, fire a 2-under over his final nine holes — on four birdies and two bogeys — to finish on a good note.

“It did not go well in the fourth round on the front nine,” Kulka said. “You can make a lot of low scores out here — there’s a lot of birdie opportunities, you’ve just got to knock in some putts. In the fourth round I was just struggling trying to hit the green, and I got nothing to fall.”

Kulka said his first year at UWGB went pretty well despite the fact the spring season was canceled in mid-March after only one tournament because of the COVID-19 pandemic.

“I’ve definitely grown a lot with my game — I’ve gotten little smarter around the greens,” he said.

Next up for Kulka will be a Wisconsin State Open Qualifier on July 22 at Washington County Golf Course in Hartford — the State Open, which will be celebrating its centennial this year, is scheduled for Aug. 17-19 at Blue Mound Golf and Country Club in Wauwatosa — before he competes in the 119th Wisconsin State Amateur Championship from July 27-30 at Milwaukee Country Club in River Hills.

As for Romo, who grew up an hour east of Riverside Golf Club and is a 1998 graduate of Burlington High School, he was also at 3-under entering Sunday after an even-par 72 in round one and a 3-under 69 in round two.

He dropped a stroke through nine holes of round three but rebounded with a 2-under on his second nine to start round four at 4-under. He couldn’t get much going after that, though, and finished the tournament tied for 41st at 1-under.

The avid golfer is getting back into the swing of things now that pandemic restrictions around the country are for the most part loosening up.

“Like everybody, you’re trying to make sure that your family and everyone is OK. So that’s the start of it,” he said when asked how the pandemic has impacted his golf game. “But I’ve been starting to pick it back up now. Tournament season’s coming up, so I’ll have a month or two. This is a good start — just trying to get some of the cobwebs off and go from there.”

Romo has over the years made a splash in several big tournaments, including at last September’s Safeway Open, a PGA Tour event in Napa, Calif. It was the fourth time in two years that he been given a sponsor’s exemption into a PGA Tour tournament and he carded a 2-under 70 in round one, leaving him tied for 28th ahead of the likes of Justin Thomas, Jim Furyk, Hideki Matsuyama and — by five strokes — Phil Mickelson.

According to a story written for Golf Digest by his partner in the TV booth, Jim Nantz, there were arrangements in place by CBS Sports for if Romo had made the cut. But he ended up carding a 6-over in round two and didn’t make it to the weekend, leaving him free to work the Minnesota Vikings-Chicago Bears game that Sunday.

Nantz wrote in that same story that he thinks golf might be a bigger passion for Romo than football, and that he wouldn’t be surprised to see the former signal caller make a cut on the PGA Tour at some point this year.

Romo will get a chance to make some noise in that regard when he plays at Highland Springs Country Club in Springfield, Missouri, from July 23-26 on the Korn Ferry Tour — the PGA Tour’s developmental tour — thanks to a sponsor’s exemption.

And Romo also said Sunday that he’ll probably play in the Wisconsin State Amateur a month from now as well as in the American Century Championship celebrity golf tournament from July 8-12 at Edgewood-Tahoe Golf Course in Stateline, Nevada, along the shores of Lake Tahoe.

Romo, who is the two-time defending champion at the latter event — which will be televised by NBC Sports — also said he plans on playing in the 114th Southern Amateur Championship from July 15-18 at Maridoe Golf Club in the Dallas suburb of Carrollton, Texas.

“So we’ll have a good schedule,” he said.

Despite not doing as well as he’d like this weekend at Riverside, Romo said it was a good three days.

“It was fun. My dad was out here and we had a great time.”

With jaw-dropping drives and some clutch putts, Bryson DeChambeau won the Rocket Mortgage Classic by three strokes Sunday for his first victory of the season and sixth overall.

'A Ryder Cup with no fans is not a Ryder Cup': Whistling Straights officially postponed to 2021

The Ryder Cup at Whistling Straits has officially been postponed because of the COVID-19 pandemic, moving to Sept. 24-26, 2021.

'A Ryder Cup with no fans is not a Ryder Cup': Whistling Straights officially postponed to 2021

The Ryder Cup at Whistling Straits has officially been postponed because of the COVID-19 pandemic, moving to Sept. 24-26, 2021.

Beaver Dam High School 2019 graduate Zak Kulka (left) tees off on No. 16 at Riverside Golf Club in Janesville as Tony Romo warms up next to the tee box during the final round of the 72-hole Ray Fischer Amateur Championship on Sunday.

Tony Romo chips on the 17th green at Riverside Golf Club in Janesville on Sunday during the final round of the 72-hole Ray Fischer Amateur Championship.

Tony Romo tees off on No. 17 at Riverside Golf Club in Janesville on Sunday during the final round of the 72-hole Ray Fischer Amateur Championship.