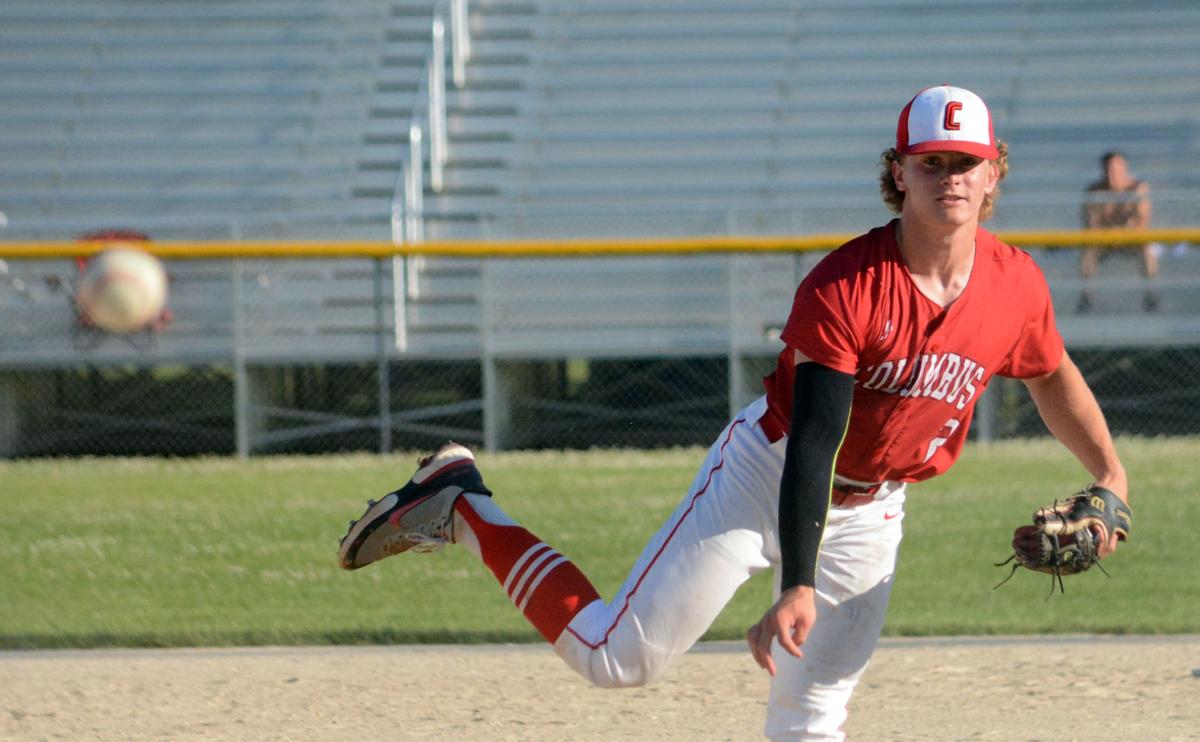 Columbus pitcher Trace Kirchberg pitched 5 2/3 innings with 10 strikeouts during a non-conference game against Baraboo on June 9. He was a first-team utility player as well as Player of the Year in the Capitol North Conference this season. 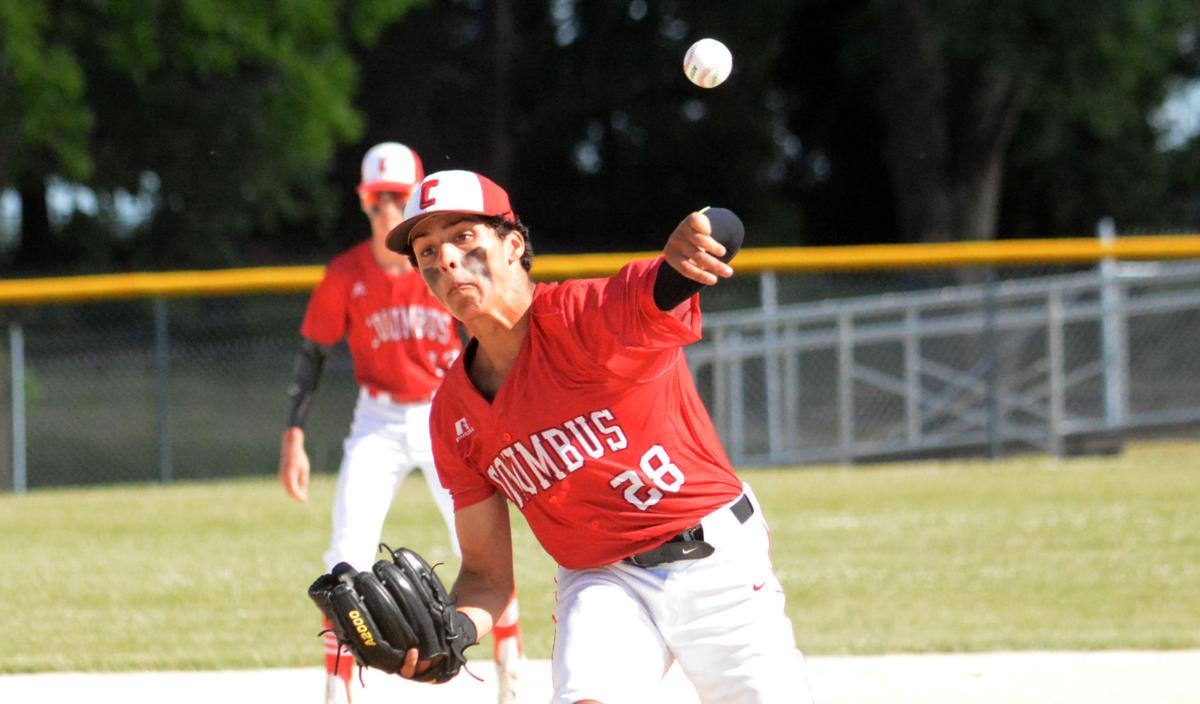 Columbus pitcher Christian Oppor throws a no-hitter in a WIAA Division 2 regional semifinal against Portage on June 15. He struck out 13 Warriors. Oppor was a first-team pitcher in the Capitol North Conference. 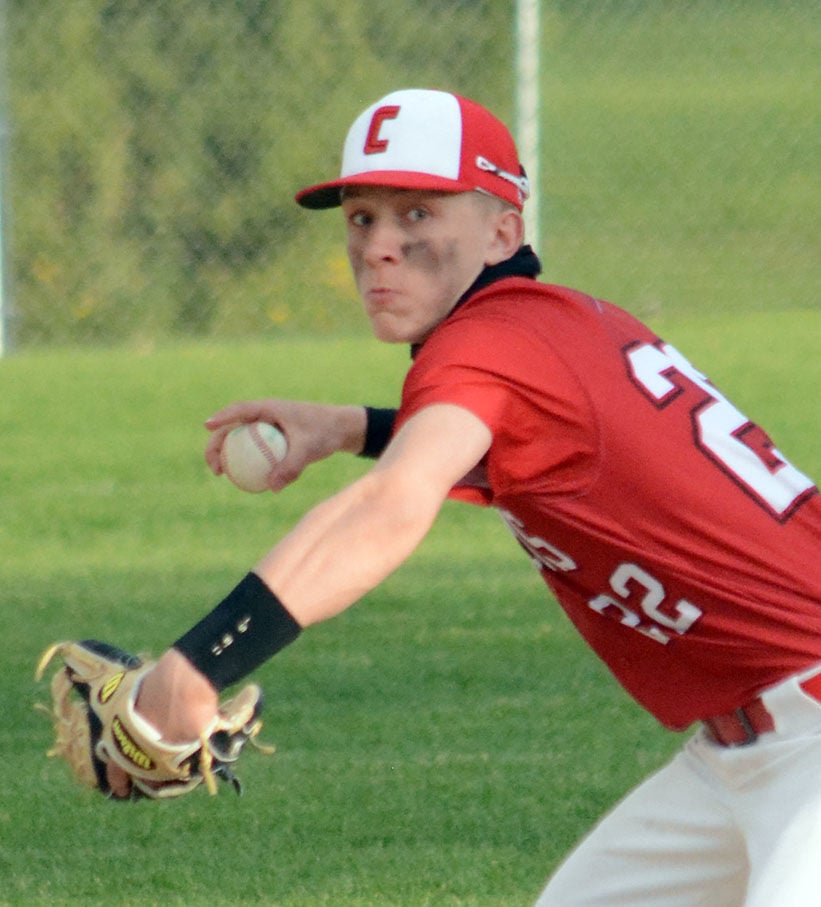 Columbus junior was one vote shy of being named a unanimous first-team second baseman by the Capitol North Conference coaches this season.

Senior Trace Kirchberg was a special talent for the Columbus prep baseball team during the 2021 spring season.

He was one of the Cardinals’ top pitchers and infielders while also carrying a powerful bat that put fear in opposing pitchers during Capitol North Conference play.

For his performance, the league coaches not only unanimously selected him as a first-team utility player, all of them also voted him as the Capitol North Conference Player of the Year.

“There was very little debate about it,” Columbus coach Tim Stormer said. “The coaches in the conference were pretty impressed with how he played.”

On the mound, he pitched 26 innings with a 5-0 league record. He struck out 49 batters while only walking 19. He also only gave up five runs (two earned) off 10 hits in league play. At the plate, Kirchberg led the team with a .593 batting average with a team-high 17 RBIs, a home run, two triples and six doubles. He was also walked a team-high 10 times.

“Trace is a phenomenal athlete and he works really hard,” Stormer said. “Every accolade he’s got, he’s deserved. He’s a super hardworking kid.”

In addition, there were only four first-teamers that were unanimously selected. Along with Kirchberg was Columbus junior pitcher Christian Oppor, Lake Mills senior outfielder Sam Giombetti and Lodi junior designated hitter Mitchell Lane.

“You don’t get players that come along like that every year,” Stormer said of Kirchberg and Oppor. “You’d be fortunate enough to probably have one to play with that kind of a talent. You’d be fortunate enough to have a player like that once every four years. I feel very blessed to have a chance to get to coach those two guys. It’s special to watch them as their coach.”

Stormer said coming into the season, he made it a point not to talk about Oppor much because he wanted him to “fly a little bit under the radar.”

That didn’t last long, as the junior pitcher twirled a five-inning no-hitter with 11 strikeouts in a 12-1 Capitol North Conference victory over Lake Mills to open the season.

“In my first win as a varsity coach, Christian threw a no-hitter and that was really special,” Stormer said. “We’re really looking forward for him next spring.”

Oppor only got better as the season went along. During league play, he pitched 25 1/3 innings with a team-high 51 strikeouts and half of his 10 runs given up were earned off nine hits and 15 walks. He finished with a 4-1 record to help the Cardinals win a conference title.

At the plate, Oppor finished with a .355 batting average and had 15 RBIs, a team-high three homers, a triple and two doubles.

Stormer said sophomore AJ Uttech was one vote shy of becoming the fifth unanimously selected member of the first team. Uttech was voted as a first-team infielder after batting .486 with 15 runs scored and four RBIs. He also had a .537 on-base percentage as the leadoff hitter.

“AJ has the ability to be as good as Trace and Christian,” Stormer said. “He had a really good year for us as he wound up hitting leadoff. … When you have a guy that can lead off and is on base in front of your better hitters, it set us up all year long to really drive in runs. That’s what we did.”

Mobry was second on the team with a .444 batting average with five RBIs and 18 runs scored. He also had a triple and a double, and an outstanding .512 on-base percentage.

“He probably should’ve been a first-team all-conference infielder,” Stormer said. “There were a lot of kids nominated throughout the conference. I felt a little bad James didn’t get first team, but that’s the way it goes sometimes.”

As for Schroeder, Stormer said he played outstanding defense and never made an error all season long. Stormer batted .227 at the plate with four RBIs and three runs scored.

“We were searching for that third outfielder and Brady grabbed it and ran,” Stormer said.

Stormer said Sullivan has only touched the surface of how good of a player he is and the conference will find out over his junior and senior seasons. He batted .321 this season with seven RBIs, six runs scored and a pair of doubles.

“His batting average does not reflect how well he hit the ball this year,” Stormer said. “We went back through the book before we had our banquet and there were 10 times he either lined out or an outfielder made a diving catch to catch a ball he hit. You had those 10 hits in there and he’s hitting probably .500.”

Stormer said Link was playing out of position this season, as he normally plays shortstop, but with James Mobry there, Link moved over to third.

“He jumped right at it,” Stormer said of Link, who also batted .375 with 10 RBIs and eight runs to go along with a double. “He played really well there for us. I told him after we had our conference meeting that I really expect him to turn into Trace. He works that hard and has that kind of ability.”

The last one was Jefferson Mobry, who Stormer threw to the wolves as a freshman catcher for the team’s two studs, Oppor and Kirchberg, on the mound.

“I personally believe Jefferson had one of the harder jobs in the state to catch two pitchers like that, that throw that hard,” Stormer said. “To do it as a freshman. We didn’t really have a catcher (besides him). … Jefferson is going to be a special player. He’s another kid that works really hard in the weight room.”

It helped the young freshman bat .357 with 10 RBIs and all 10 of his hits were singles.

“He really has the ability to hit the ball,” Stormer said. “I think as he gets older here, he’s going to really hit for some power.”

All of this bodes well for Stormer, who’s excited to see what the Cardinals can do in the seasons to come.

“We’re looking forward with the years we’ve got coming with these guys,” he said. “We’re excited. It’s going to be hard to replace James and Trace.”

BASEBALL: Christian Oppor has turned himself into one of top pitchers for Columbus

The Panthers' pair helped lead Royall to a third WIAA Div. 4 sectional in the last four seasons and were joined by two others as first-team picks.

Columbus pitcher Trace Kirchberg pitched 5 2/3 innings with 10 strikeouts during a non-conference game against Baraboo on June 9. He was a first-team utility player as well as Player of the Year in the Capitol North Conference this season.

Columbus pitcher Christian Oppor throws a no-hitter in a WIAA Division 2 regional semifinal against Portage on June 15. He struck out 13 Warriors. Oppor was a first-team pitcher in the Capitol North Conference.

Columbus junior was one vote shy of being named a unanimous first-team second baseman by the Capitol North Conference coaches this season.