Olympics live: Simone Biles on the beam, Men's basketball and the latest results from Tokyo

BASEBALL: Markesan done in by Marathon's big top of the ninth inning, loses in extra innings in sectional finals
0 Comments
Share this
{{featured_button_text}}
1 of 4 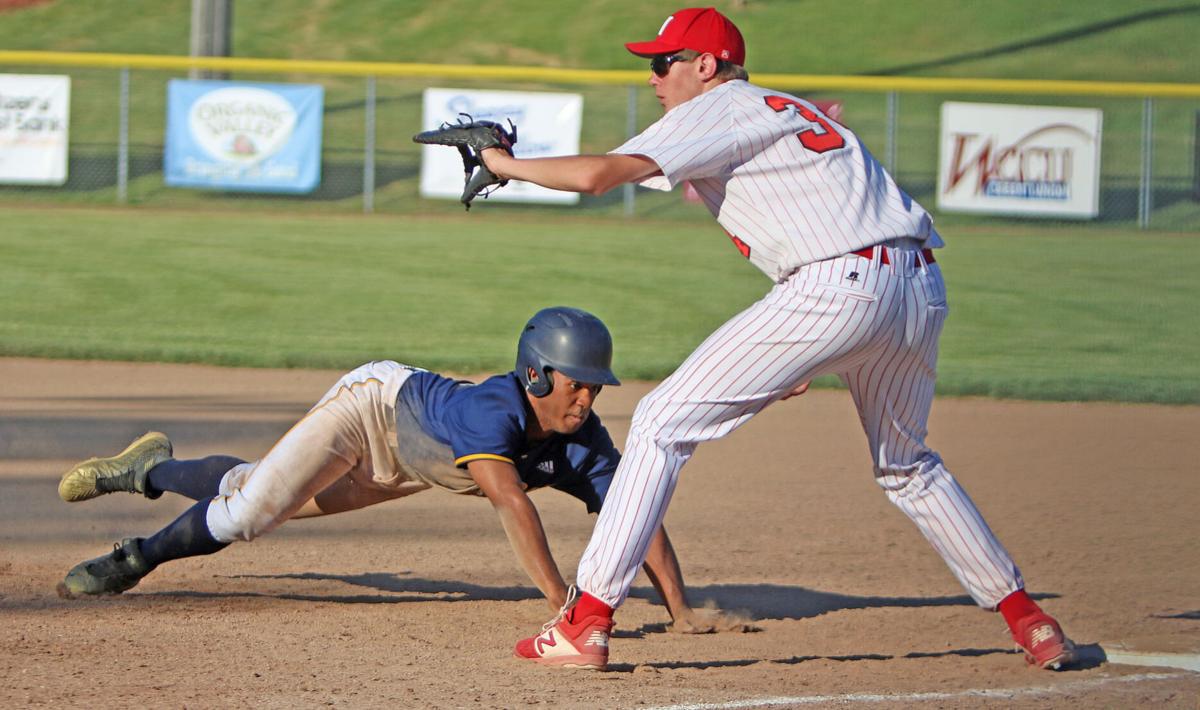 Markesan's Micah Kracht dives safely back to first base on a pickoff attempt during the Hornets' 8-1 loss to Marathon on Tuesday night at Viroqua Park Bowl in the WIAA Division 3 sectional finals. 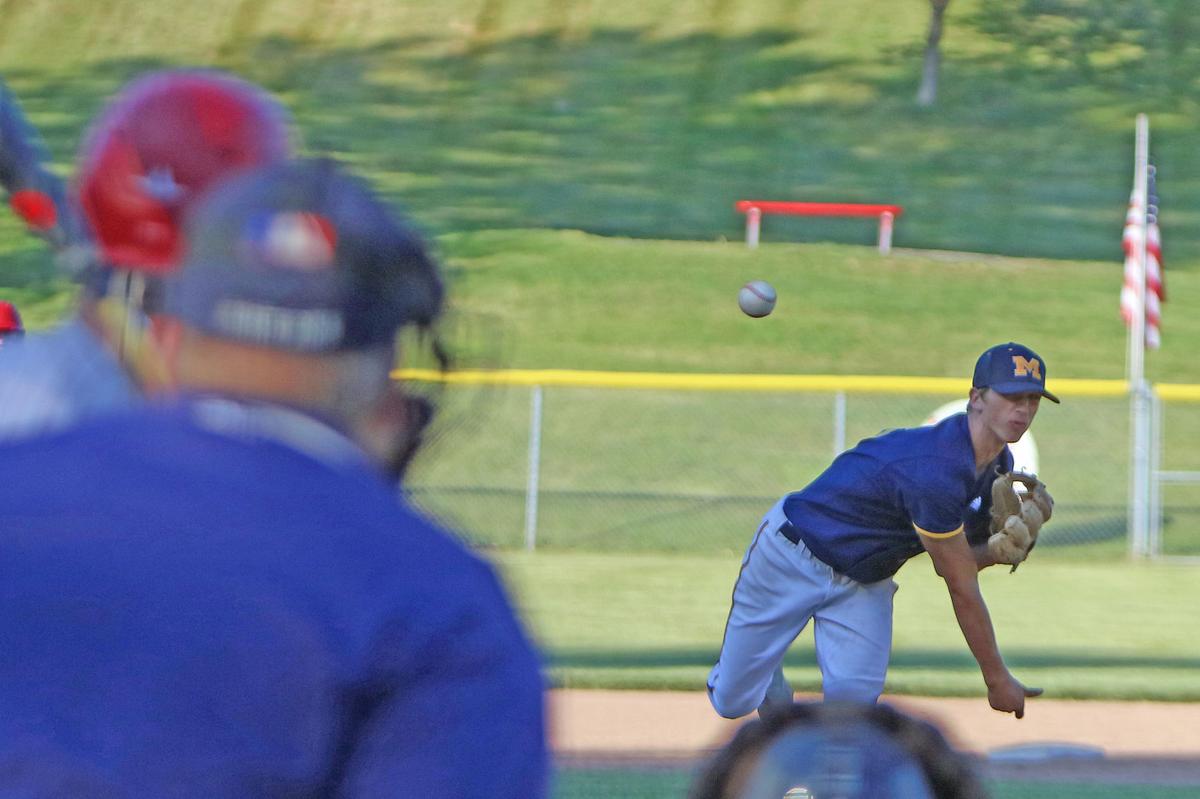 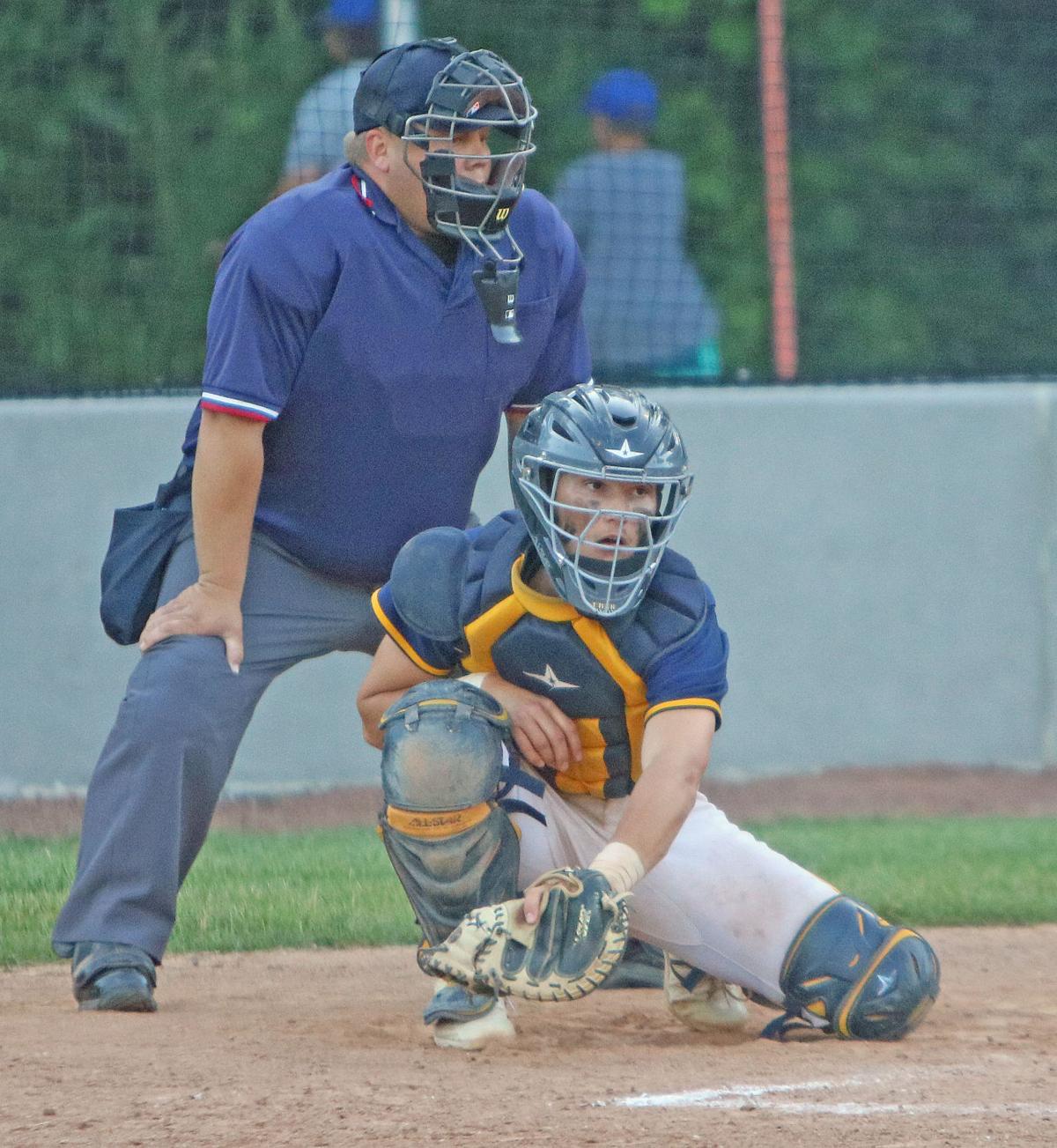 Markesan catcher Sage Stellmacher checks on a runner at first after catching an outside pitch during the Hornets' 8-1 loss to Marathon on Tuesday night at Viroqua Park Bowl in the WIAA Division 3 sectional finals. 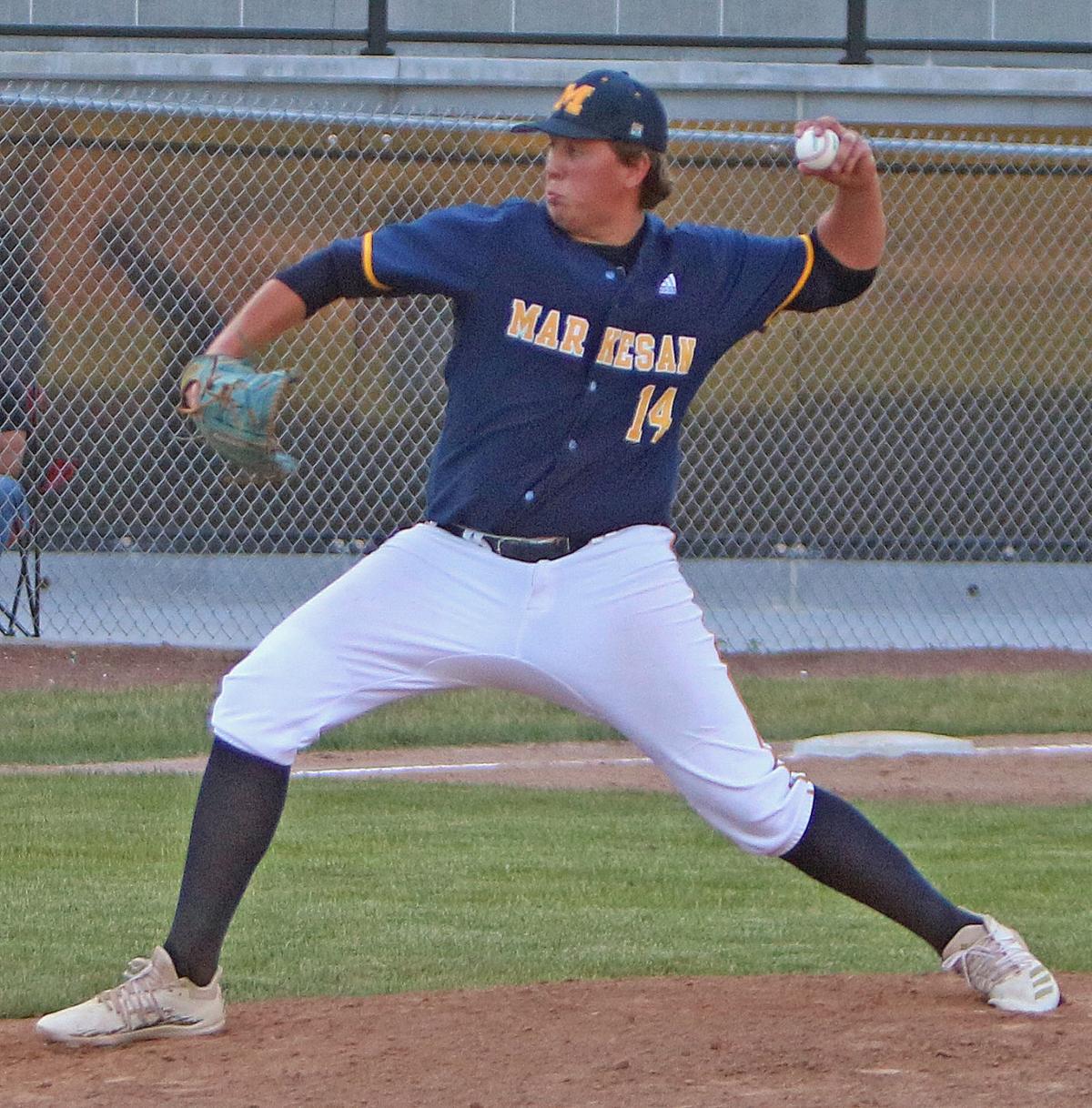 Markesan pitcher Gavin Gilbertson delivers to the plate during the Hornets' 8-1 loss to Marathon on Tuesday night at Viroqua Park Bowl in the WIAA Division 3 sectional finals.

The second time it was a series of blows — and the second time, the Hornets couldn’t regain their balance enough to continue the fight.

Playing in their second extra-innings game of the day at Viroqua Park Bowl, the Hornets couldn’t orchestrate another magical ending, giving up seven runs in the top of the ninth inning and losing 8-1 to the Red Raiders in the WIAA Division 3 sectional finals.

“It snowballed,” Hornets coach Dean Slark said of the top of the ninth getting so out of hand. “It’s a tough situation, “but they battled all day.

The way the inning started, it seemed as though Markesan might live to see the game remain tied — and perhaps, live to see another day.

Relief pitcher Hayden Quade issued a leadoff walk then a wild pitch to put a runner on second, but then came a high pitch on a bunt attempt that catcher Sage Stellmacher snagged and fired a strike to second for a pickoff and the first out of the inning.

But things got out of hand after that. The Red Raiders (19-7) settled back in and loaded the bases before sophomore Daniel LaQua brought home what would be the game-winning run on an infield RBI single for a 2-1 lead.

It was just the beginning, as the Hornets weren’t able to extinguish the fire in enough time to make rallying in the bottom half of the inning a manageable proposition.

“You think if you give up one run, the bats are going to get it going and get at least two runs for us (in the bottom half),” Slark said of trying to keep the game within reach after the first run scored. “Hats off to Marathon, they did well. Sometimes that’s baseball.

“The Mineral Point game took a lot out of us, I think, and we kind of ran out of pitching — especially when you’re going two extra-inning games.”

Markesan, the sixth-ranked team in D3 according to the Wisconsin Baseball Coaches Association state poll, got a leadoff single in the bottom of the ninth but nothing came of it, with the contest ending on an 8-3 double play.

Marathon went in front 1-0 in the top of the fifth on an opposite field RBI single by Jake Sweno but Markesan promptly answered to tie the game in the bottom half on a Jaden Walker RBI knock, seemingly wresting momentum away from the Red Raiders.

But neither side could mount much of a threat after that until the Red Raiders blew the game open in the ninth.

All this after Markesan (19-2) came from behind in the semifinals against fourth-ranked Mineral Point (25-4), scoring three times in the bottom of the ninth for a 7-6 walk-off win.

Coupled with the heartbreaking loss to the Red Raiders (19-7) — they got their eight runs on just six hits, capitalizing in a big way on the Hornets five errors in the contest — it added it up to an emotionally-charged day for Markesan.

“It was a fun game, the first one,” Slark said of the semifinals. “It’s like a roller-coaster, though — it’s up and down, up and down, and we ended up at the bottom. That’s baseball.”

Despite the messy top of the ninth for Markesan in the field, the Hornets body language remained positive.

It was a tall mountain to climb, but they were ready to at least give making a memorable comeback a shot.

“That’s what you want out of your kids, that they’re fighting to the end and rally together,” Slark said. “I’m really proud of them.

“It was a great season, it just didn’t end how we wanted it to.”

Before getting blown away by the Red Raiders in the sectional final, the Hornets stung Mineral Point with a 7-6 walk-off win in the second of the day’s two semifinals.

avin Gilbertson went 2-for-5 with a pair of RBIs, including the game-winning walk-off double, while delivering 2 2/3 innings of scoreless relief to help lift the Hornets to second consecutive sectional final against Marathon. The Red Raiders upset top-seeded La Crosse Aquinas, 6-2, in the opening semifinal tilt of the afternoon.

It wasn’t all the Hornets bats that got things done as Markesan (19-1) made the most of five Pointers errors, including two in the bottom of the ninth.

After a leadoff single by Aiden Schmick, the Hornets leadoff man moved to second on a throwing error by Mineral Point’s Leyten Bowers. Sage Stellmacher then singled to center field to put runners on the corners before things truly got interesting.

With Chayce Osterhaus at the plate, Mineral Point catcher Dominik McVay tried to nab Schmick down at third base; however, the failed pitch out failed as he raced home to cut the lead to 6-5 and Stellmacher moved into scoring position. Osterhaus made the miscue pay by flicking a double out to left field to knot things at 6, before trotting home on Gilbertson’s RBI double off the fence in right to send the Markesan bench charging onto the field.

The Hornets were abuzz early on after scoring two runs in the bottom of the first inning on consecutive RBI singles by Gilbertson and Bryce Leedle for a quick 2-0 lead. The Pointers (25-4) eventually pounded back in the third through McVay, as the junior uncorked a one-out, three-run home run to straight-away center field for a 3-2 lead.

A Jaden Walker RBI single and another run off a Pointers error gave the Hornets a 4-3 lead in the bottom of the fourth, but it didn’t last long. Mineral Point responded right back in the top of the fifth as Will Straka drew a full-count walk to lead things off before McVay singled to put runners on the corners.

Leedle worked back-to-back strikeouts to nearly escape the damage unscathed, but a wild pitch with Bo Hanson at the plate brought home Straka to even things at 4. Following a scoreless home half and an empty sixth, both teams threatened in the seventh.

The Pointers got a pair on with one out, but Gilbertson got Bowers to ground out before punching out Hanson to end the threat. The Hornets nearly ended things in the home half as Stellmacher was hit by a pitch with two down. He then swiped second and moved to third on a throwing error, but was left 90 feet from home as Hanson rung up Osterhaus swinging to force extra innings.

The seventh was just the start of the drama to ensue as both teams missed chances in the eighth as Gilbertson stranded a pair in the home half with an inning-ending 4-6-3 double play, while Hanson worked back-to-back strike outs with the bases loaded to shut the door on the Hornets.

The Pointers finally broke the deadlock in the top of the ninth on a Bowers RBI fielder’s choice and a Hanson RBI infield single, but it wasn’t enough to hold back the Hornets’ heroics.

Stellmacher went 2-for-4 while Leedle added a pair of hits and struck out 11 in 5 1/3 innings of work before getting pulled after hitting the pitch limit. Meanwhile, McVay went 2-for-4 with three RBIs while Luke Kisgen went 2-for-5 with a double to pace the Pointers.

Wasted chances and stranded baserunners are a recipe for disaster.

The Lodi prep baseball team didn’t have the easiest middle of the season, losing seven of 10 games over the final 15 days of May, including a …

MARKESAN — Senior Bryce Leedle is having an exceptional year on the mound for the Markesan prep baseball team.

Markesan's Micah Kracht dives safely back to first base on a pickoff attempt during the Hornets' 8-1 loss to Marathon on Tuesday night at Viroqua Park Bowl in the WIAA Division 3 sectional finals.

Markesan catcher Sage Stellmacher checks on a runner at first after catching an outside pitch during the Hornets' 8-1 loss to Marathon on Tuesday night at Viroqua Park Bowl in the WIAA Division 3 sectional finals.

Markesan pitcher Gavin Gilbertson delivers to the plate during the Hornets' 8-1 loss to Marathon on Tuesday night at Viroqua Park Bowl in the WIAA Division 3 sectional finals.