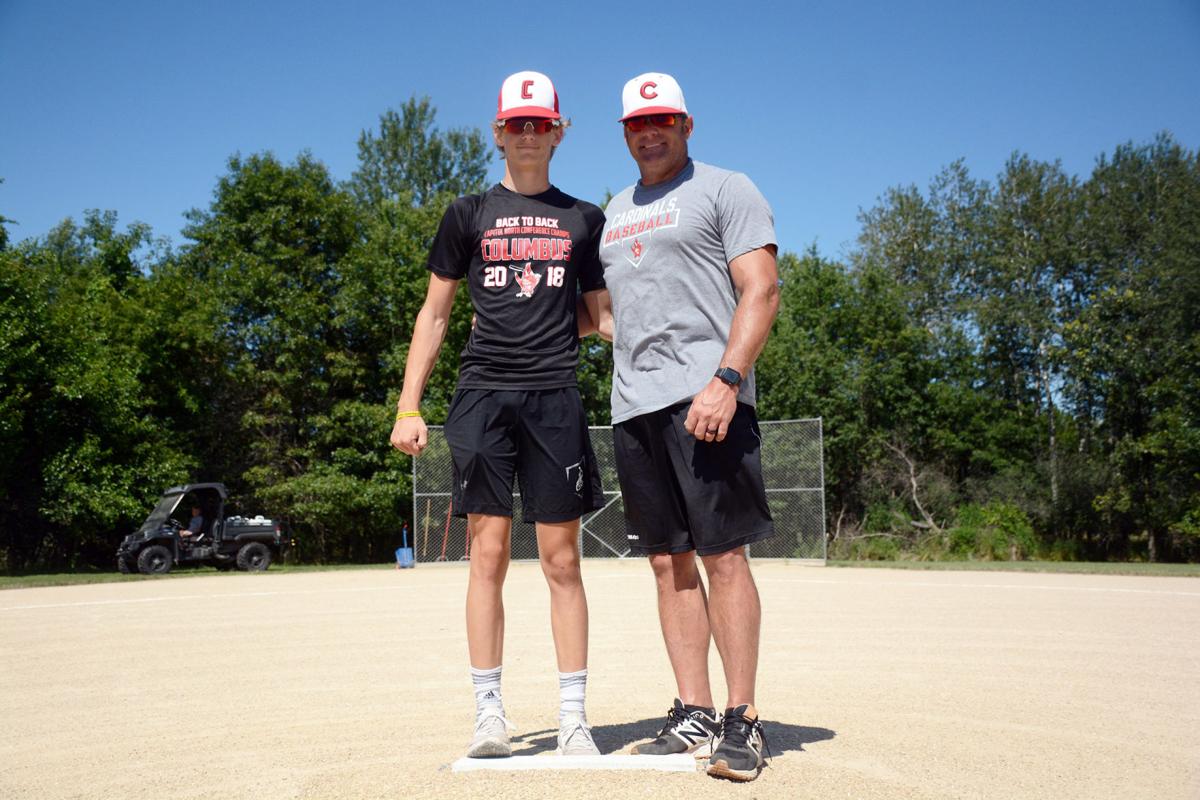 James Mobry (left), who will be a senior at Columbus High School this school year, has his own baseball diamond in his backyard thanks to his dad, Jim, remodeling a smaller diamond that was left on the property when they first moved in seven years ago. 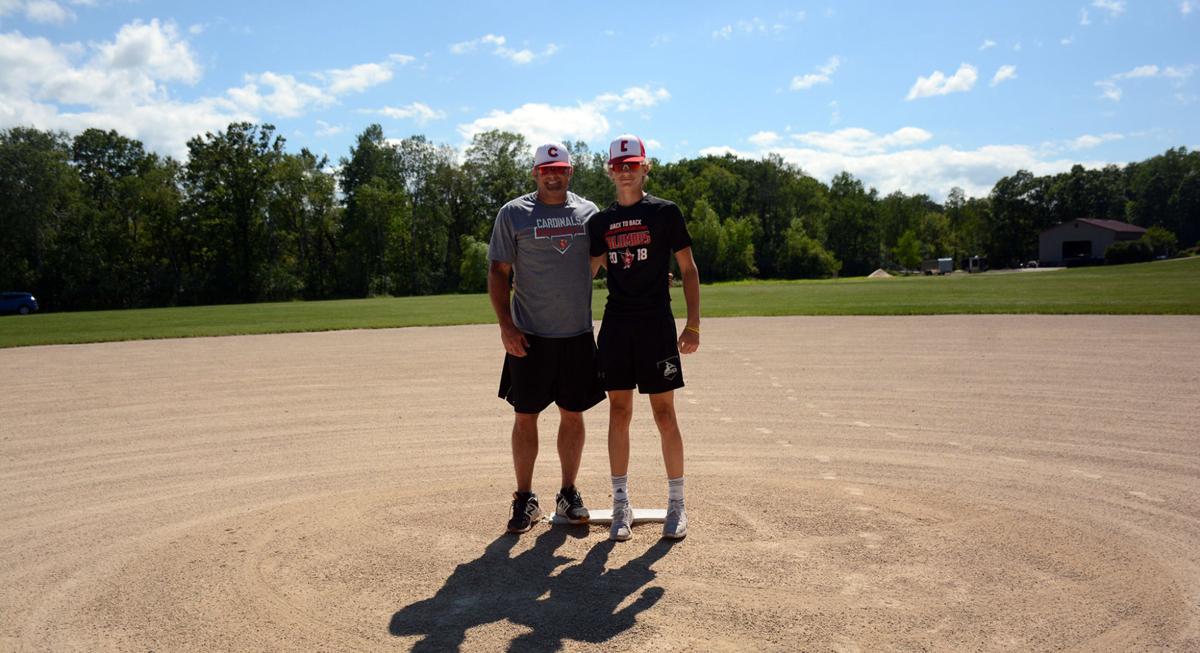 James Mobry (right) has had the opportunity to play baseball throughout the whole COVID-19 pandemic because his dad, James (left) remodeled a smaller baseball diamond in their yard into a regulation sized diamond.

RIO – Jim and Juli Mobry moved to N2923 Severson Road about seven years ago with their children.

The big property featured a small diamond. At the time, Jim’s boys — James, Jeff, and Jordan — weren’t that old and the diamond was the perfect size for Little League players.

“They could hit dingers when we had practice. It was perfect,” Jim said. “We quickly outgrew it.”

About four years later after James, 18, Jeff, 15, and Jordan, 13, had outgrown the diamond, Jim decided to remodel it. Jim got his friend Kevin Theel, who drives an excavator, to help move the diamond down the yard to give more room and depth in the outfield. Now, from home plate, the distance to left field is about 280 feet to the corner and 300 feet to the gap, center field measures at 400 feet or so and to the right field corner, where the hill is cut, it’s 285 feet.

“It’s almost a regulation outfield,” Jim said. “My comparison of large diamonds, it would be considered a small outfield, but it’s definitely playable.”

When the Mobry’s first moved in, the outfield had a chain linked fence, but with the remodel, Jim decided not to keep it and plans to invest in a breakaway fence because not only is it cheaper, it also allows to determine how big the outfield will be.

He built the infield to regulation size, which is 90 feet from base to base and 60 feet, 6 inches from the mound to home plate.

“The reason that I decided to build the infield official size is just for that reason — for when you’re practicing, you’re making the right throws long distance, pitching, cuts and things of that nature,” Jim said. “It’s proper.”

For two years the Mobrys have been working on the diamond to get it to where it is now and spent upwards of $20,000. Jim still plans to have a bench as well as increase the size of the backstop behind home plate to lose less balls.

“Well, from now on, I’m not allowed to start any projects without a budget,” Jim jokingly said, while also mentioning his wife was a big reason why he was able to do such a project.

“This would’ve never happened if it wasn’t for her,” he said. “She’s just as much of a baseball lover as we are.”

Jim said he and his family had one goal with the project, and it couldn’t have come at a better time since the COVID-19 pandemic began in late spring and forced families to stay home far more than normal.

The stay at home order in the state ended in late May and come June and July baseball diamonds in the area quickly became busy again. Unfortunately for the Columbus baseball players, the only baseball diamond is the one at Fireman’s Park adjacent to the school.

As luck would have it for the Cardinals, James will be a senior while his younger brother Jeff will be a freshman this season. Since the Mobry family lives in Rio, James and Jeff open enrolled at Columbus High School because their parents grew up in Columbus and the family spent most of their life living there. Jim is a 1988 Columbus High School graduate and Juli graduated in 1992.

“We fell in love with this house and being in the country,” Jim said of why they moved out to Rio. “So we are here.”

With the baseball field being occupied by the 17-and-under, 15U and 14U summer teams that Columbus High School varsity baseball coach Tim Stormer organized, as well as the Renegades and the Home Talent League Columbus Crawdads, competition for use of the diamond is high.

Stormer said the diamond the Mobry family owns has been a lifesaver because it allows for more kids to practice.

“It’s fantastic,” Stormer said. “It’s really been nice because you don’t have to worry to schedule something in because that field is available.”

Jim, who’s an assistant on Stormer’s staff, said Columbus school administrators closed the high school down well into August and because of that he and Stormer can’t have official contact with the players. As a result, practices on the diamond have been player led.

“I can be there, but I can’t give direction,” Jim said. “It sounds silly.”

There have been at least four practices since the pandemic has lifted.

“It’s nice,” James said. “We practice on it as many times as we can to get some baseball in.”

And Jim added that Trace Kirchberg, who also will be a senior this school year, has homered way out in centerfield where there is a dirthill at about 400 feet.

“If you did break a window, you’d probably get a medal,” Jim said. “We’d probably have to make a trophy out of that window for you.”

The diamond has been such a great tool that both Jim and Stormer said they have plans to ask the school district if it would be alright to have the Columbus junior varsity team practice there next spring.

Jim said there will be certain stipulations the baseball program will have to follow from the WIAA, but “they’re not terrible.”

They’re things like insurance for potential injuries of any of the players and coming up with money for transportation because the diamond is about 20 minutes away.

“We’re going to pursue that to see if there’s anything we can do,” Stormer said. “We don’t know if it will work out or not. For the summer it’s been awesome.”

It’s especially been awesome for the Mobry boys because whether there was a stay at home order or not, they’ve been able to spend time with their dad on the diamond as much as they’ve wanted. It also helps that they have a Hack Attack pitching machine at their disposal as well.

“It can throw curveballs, sliders and whatever you want,” Jim said. “We bring out a little generator and we hit until the lights go out.

“They had to do them strictly with their dad and there was no one to pre-occupy me, so they had my full attention,” Jim added with a smile. “Maybe that was good, maybe it wasn’t. We had a lot of fun.”

Portage scratched a run across in the top of the second inning to break apart a tie game and take the lead, but the damage could have been a l…

HARTFORD – Beaver Dam leadoff hitter Alex Soto had a stellar game against Hartford on Sunday afternoon, going 3-for-4 at the plate with three …

WAUPUN — Two weeks earlier Waupun headed to the other side of the Horicon Marsh and fell into a big early hole against Mayville, ultimately su…

RANDOLPH — Getting runners on base wasn’t an issue for Randolph on Tuesday night. Getting them around the bases, however, was.

WAUPUN — When Baron Buchholz was a freshman at Waupun High School, he told Waupun baseball coach Derrick Standke prior to the start of 2017 se…

James Mobry (left), who will be a senior at Columbus High School this school year, has his own baseball diamond in his backyard thanks to his dad, Jim, remodeling a smaller diamond that was left on the property when they first moved in seven years ago.

James Mobry (right) has had the opportunity to play baseball throughout the whole COVID-19 pandemic because his dad, James (left) remodeled a smaller baseball diamond in their yard into a regulation sized diamond.