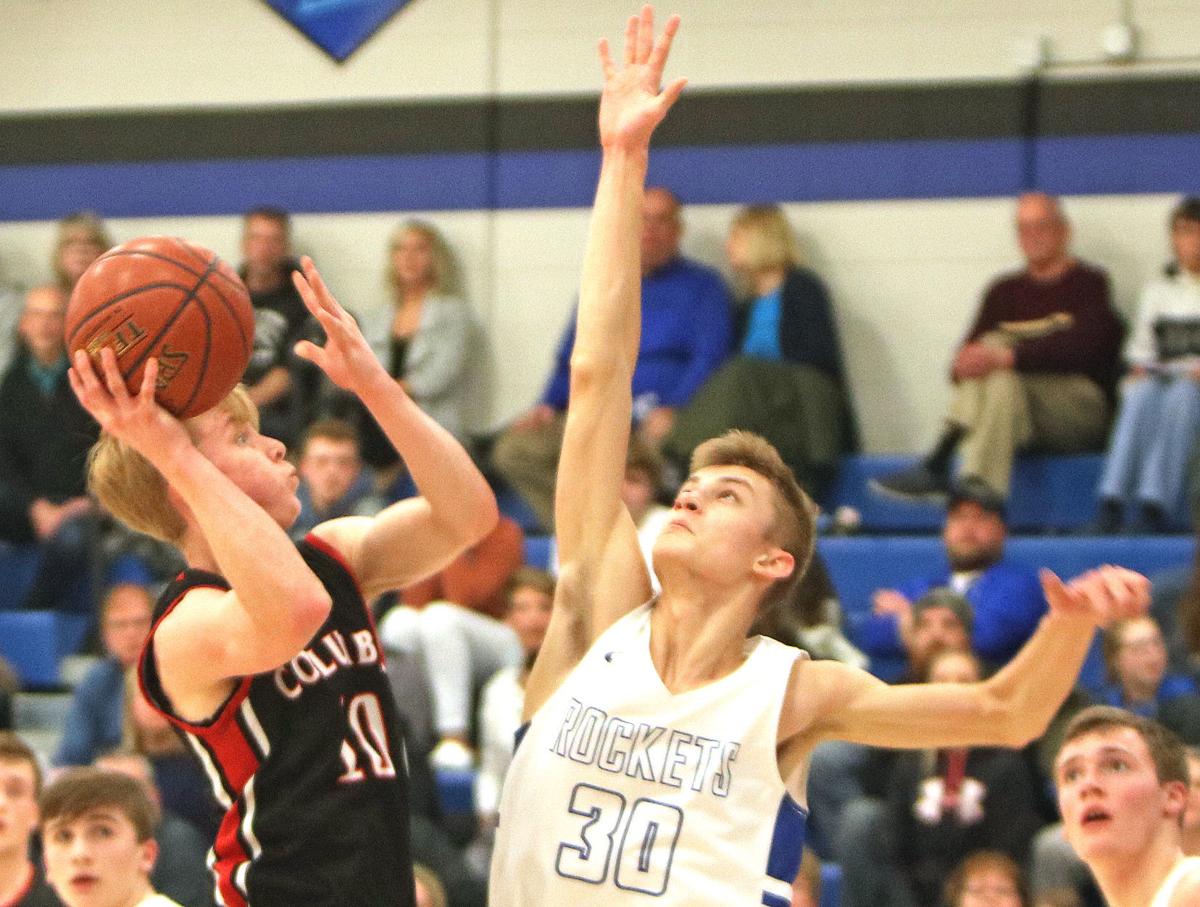 Columbus' Ryan Schulte attempts a basket in the paint as Randolph's Peyton Moldenhauer defends during the first half of the Cardinals' 58-44 win on Monday night in a non-conference game at Randolph High School. 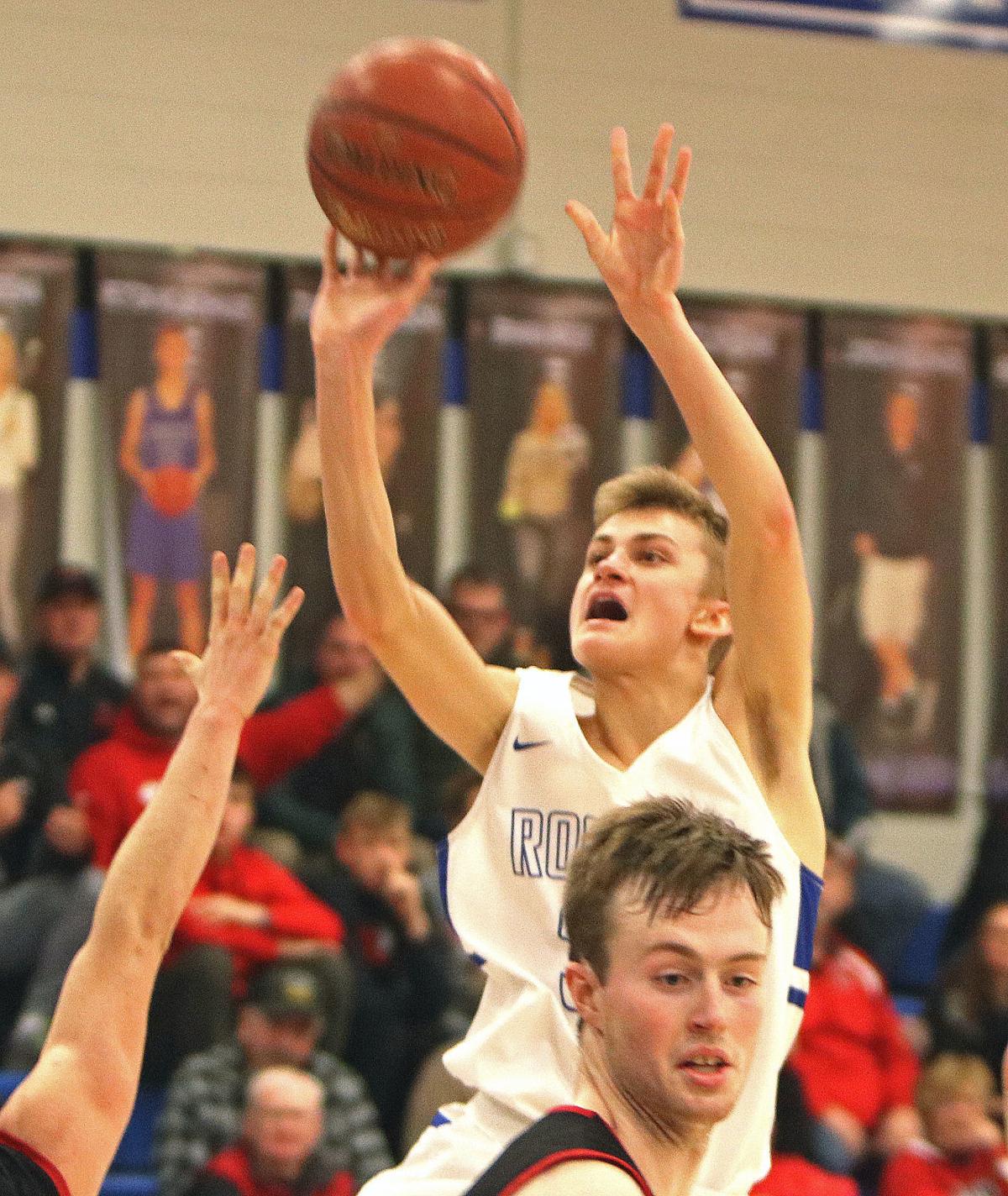 Randolph's Peyton Moldenhauer hits a fadeaway jumper over Columbus' Caden Brunell (left) during the second half of the Rockets' 58-44 loss to the Cardinals on Monday night in a non-conference game at Randolph High School.

The same wasn’t true in the second half.

The Cardinals’ Ben Emler put back his own miss with 2 seconds to go before halftime — providing the last of those seven lead changes — and then the Cards scored 17 of the first 23 points out of the break, building an advantage plenty big enough to fuel them to a 58-44 victory, thus ending the Rockets’ undefeated season.

“A couple of things,” Columbus coach Ben Schambow said. “We rebounded much better in the second half — they got a bunch of (offensive) boards in the first half that resulted in points for them, so we cleaned that up in the second half. And then we finally decided that running the offense is a good thing in the second half, because in the first half we were making it up as we went along — running to spots that weren’t within our offense. And you could see that we were completely discombobulated and we weren’t in scoring positions.

“We talked about in the locker room at halftime, ‘Run the offense the way it’s supposed to be run and you’re going to get shots out of it.’ And we did.”

And Randolph (17-1), the third-ranked team in Division 5 according to both the WisSports.net coaches poll and the Associated press poll, never could sustain momentum long enough after that to make things interesting again.

“Hats off to them, that’s a good team,” said Randolph coach Tyler Fischer, whose Rockets started 24-0 a year ago before falling to Rio in the sectional semifinals. “Our offense really struggled in the second half — we did not move the ball as well as we should have. And hitting shots — we had some decent looks that didn’t go down, and they did.

“They came out on fire there during that run and pretty much did whatever they wanted to on the defensive end. When you’re not getting stops and you’re giving up offensive rebounds and you’re not moving the ball on offense, it’s not going to be pretty against a good team. And that’s what happened.”

The Cardinals, who now have three wins over ranked teams on the year, got a big game out of Ryan Schulte, a sharp-shooting 5-foot-9 senior guard who entered averaging 6.9 points per night.

He finished with a team-high 15 points in this one, including 10 points after halftime — none bigger than the three he got on a 3 from the left wing with 7:54 remaining to give Columbus its biggest lead of the night to that point at 43-30.

“Ryan feeds on emotion,” Schambow said. “He’s been kind of down lately because he hasn’t been contributing offensively as well as he has in the past. But he’s got the green light — I told him before the game, ‘You shoot, you miss, I’m not taking you out; keep shooting. When he gets going it’s a good feeling for all of us.”

The closest Randolph got after trailing 40-28 was within seven on Peyton Moldenhauer’s fadeaway jumper that made it 47-40 with 2:05 left. But Emler, who had 14 points and entered as the Cards’ leading scorer at 21.0 per night, followed that up with an and one to make it 50-40, all but salting the game away.

It was a big win for the Cardinals, who had their six-game winning streak snapped with a 52-48 loss to Lakeside Lutheran on Friday night in what was their first Capitol North Conference defeat of the year.

“It stunk because obviously we’re trying to win conference first and foremost, but it’s a situation where you’ve got to have adversity to move forward,” Schambow said. “The guys were mad after that game, which is good. And they knew that coming into this environment — regardless of what division (the Rockets) are, they’re a good basketball team — and trying to take on an undefeated team, it would be cool to make one less in the state.

“And we did that tonight.”

Fischer echoed similar sentiments, stopping short of calling it a “good loss” because even though it might take a little pressure off of trying to remain undefeated, he didn’t think his team played very well.

“Having a good team like Columbus come in is a great opportunity for us and we said going into the game, ‘This is a good playoff test — where are we at?’” he said. “And coming out of it, we’ve got some things to work on. I think we knew that coming in, and this clearly shows that.”

The Wisconsin Dells boys basketball team picked up its 18th straight victory with a 66-39 win over Wautoma on Friday night, but this one meant…

BOYS HOOPS: Abel pours in 40 points, Beaver Dam races up and down court to blow out Port Washington

Nate Abel is no slouch when it comes to scoring, more than evident in the fact he averaged 20.4 points per game over the first 20 games of the…

Nate Abel was the first one to hit from beyond the arc for Beaver Dam’s prep boys basketball team Friday night against Portage. He was also th…

The Wisconsin Dells boys basketball team picked up its 18th straight victory with a 66-39 win over Wautoma on Friday night, but this one meant…

Kobe Smit had a game-high 28 points Friday night for Cambria-Friesland’s prep boys basketball team. None of them were bigger than the six he s…

RANDOLPH — John Koopman got career win No. 300 on Monday night in rather unspectacular fashion.

PARDEEVILLE — For the first 10 minutes of the first half, Montello and Pardeeville traded blows in what was shaping up to be a back-and-forth …

What has been an up and down season for Beaver Dam’s prep boys basketball team continued on Tuesday night at Sauk Prairie.

Senior Max Koenig scored 19 points, and senior Calvin Peterson had 15 points, and both hit some key free throws down the stretch to lead Barab…

PORTAGE – Senior Max Koenig scored 19 points, and senior Calvin Peterson had 15, and both hit some key free throws down the stretch to lead Ba…

Columbus' Ryan Schulte attempts a basket in the paint as Randolph's Peyton Moldenhauer defends during the first half of the Cardinals' 58-44 win on Monday night in a non-conference game at Randolph High School.

Randolph's Peyton Moldenhauer hits a fadeaway jumper over Columbus' Caden Brunell (left) during the second half of the Rockets' 58-44 loss to the Cardinals on Monday night in a non-conference game at Randolph High School.