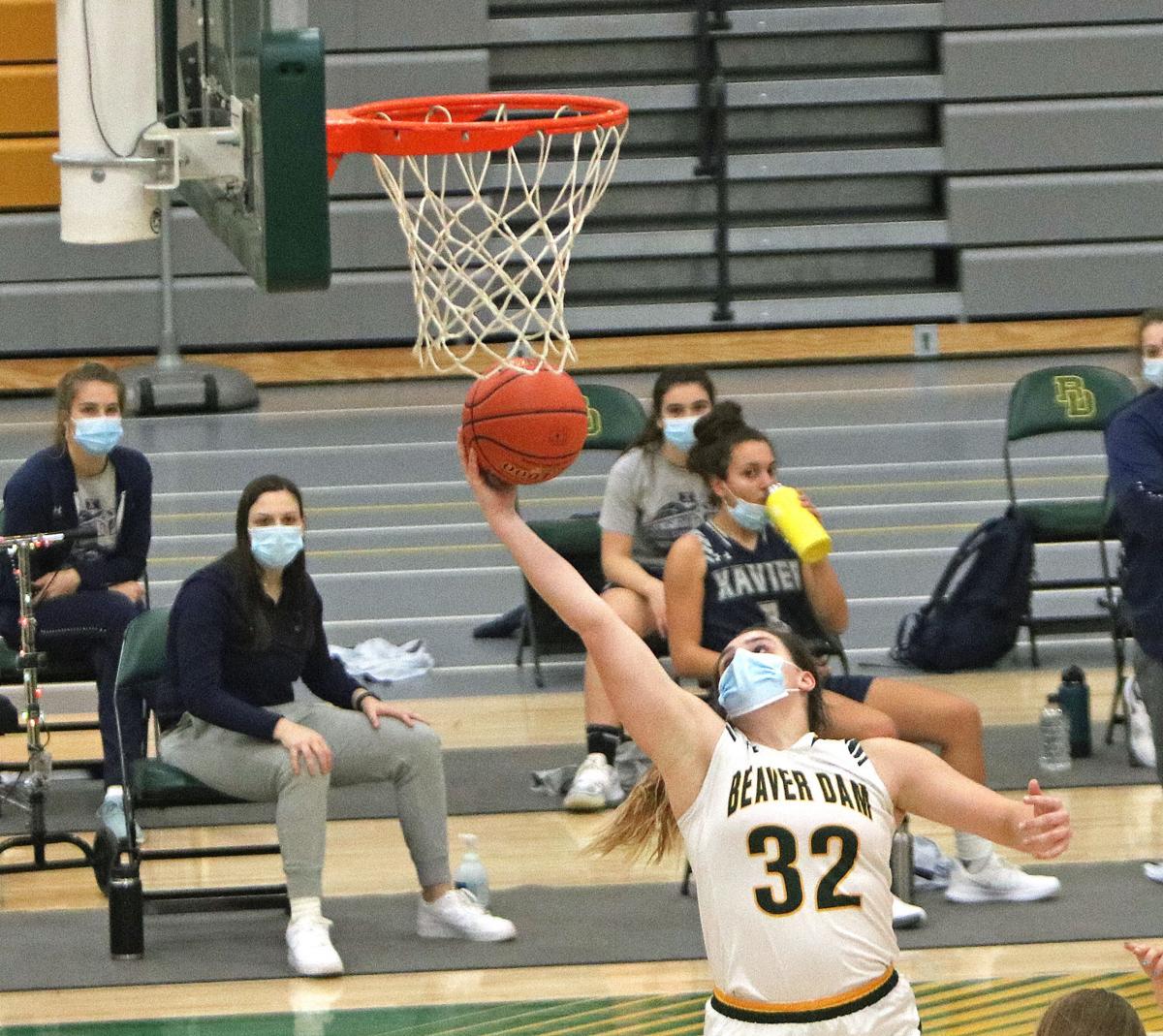 Beaver Dam's Avery Stonewall (32) reaches to corral a pass into the post before attempting a basket in the paint during the first half of the Golden Beavers' 89-31 win over Appleton Xavier on Thursday night at Beaver Dam High School. 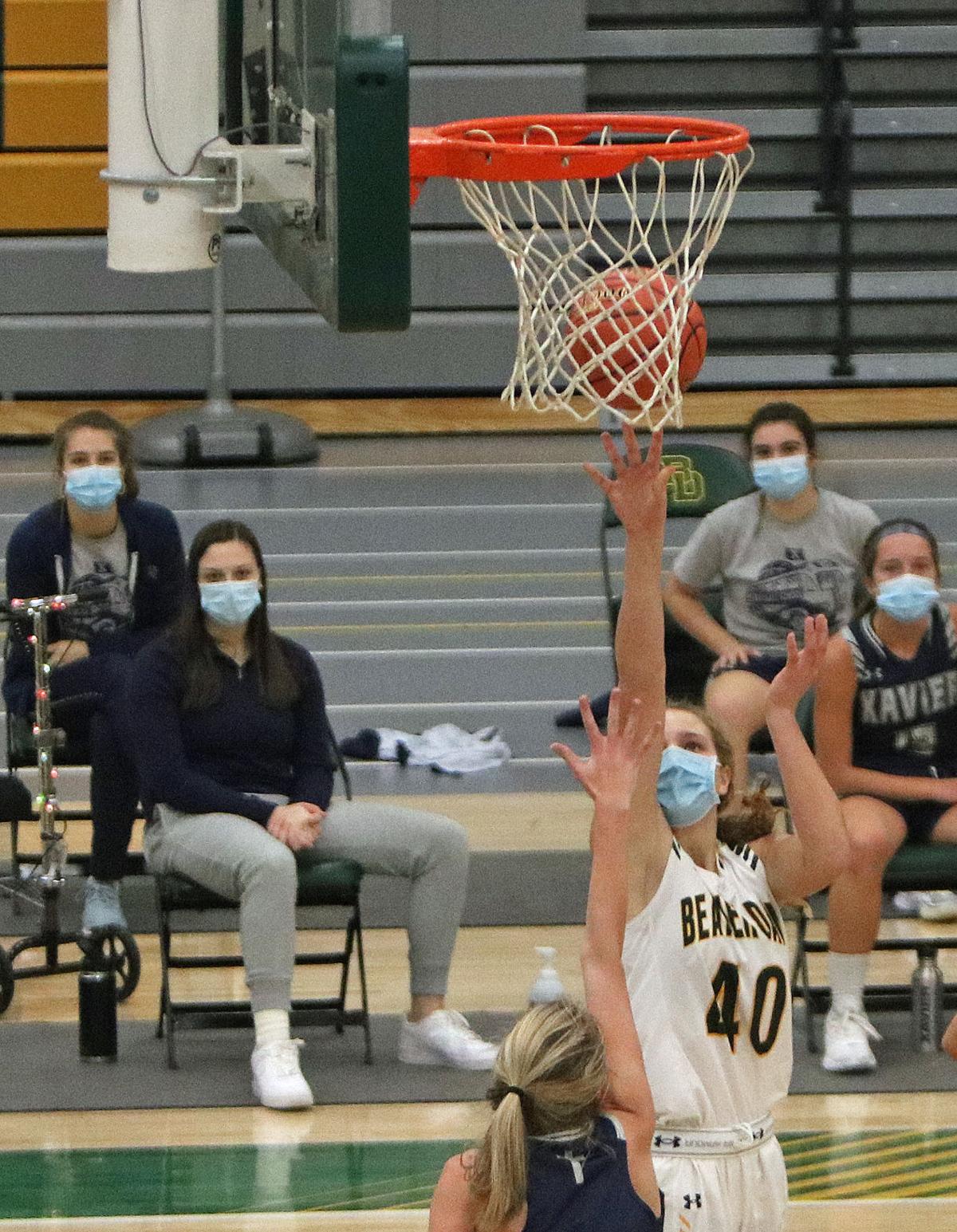 Beaver Dam's Riley Czarnecki (40) attempts a basket from the right block during the first half of the Golden Beavers' 89-31 win over Appleton Xavier on Thursday night at Beaver Dam High School.

The scoreboard tells a different story, but Beaver Dam’s prep girls basketball team has been challenged this week.

Three games in four nights. Two of them on the road. And only one against a familiar opponent.

Like they did in the first two contests of the week, the Golden Beavers were up to the task Thursday against visiting Appleton Xavier, cruising to a big lead after the first 4 minutes and winning easily, 89-31.

“It’s been a good start. We’ll take tomorrow off and start practicing over the weekend for next week.”

That big spurt was capped off with a fast break lay-up by Natalie Jens, and the senior, who had 20 of her game-high 24 points over the first 18 minutes, would also cap off the half with a breakaway basket to give the Golden Beavers a 57-17 lead over the Hawks (5-2) at the break.

“They pressured us a little bit and tried to cause some turnovers,” Chase said of the different kind of challenge Xavier provided compared with Watertown (which Beaver Dam defeated 82-38 on Monday) and Oak Creek (a 61-30 win on Tuesday). “They have some good offensive players who can score. They had some good match-ups — they’re a good team, they really are.

“We had some advantages tonight and did some good things, but (Xavier) is a different kind of team (than we’ve faced this year) because of all their guards — and having to defend all those guards.”

Beaver Dam did run into foul trouble in the first half, ultimately putting Xavier in the bonus early on, but Chase was pleased with the way his team adapted.

“We’re still fouling too much,” he said, “but I thought we did a little bit better job — once we got fouls in the first half — not to cross the line too much. We got to six (fouls) pretty quick.”

The Golden Beavers had no trouble salting the game away in the second half, seeing their lead dip just briefly — from when they were ahead by 50 at 69-19 down to 45 when it was 74-29 — before closing things out over the final 10 minutes.

Maty Wilke (22 points) combined with Jens to provide for a little more than half (46) of Beaver Dam’s points, but 11 girls in all scored for the Golden Beavers. Freshman Gabby Wilke (8 points), senior Paige Hodgson (7) and senior Paige Yagodinski (6, on a pair of 3-pointers) led the way to complement the top duo.

Being the coach that he is, Chase knows that despite the hot start — and the lopsided victories piling up — there’s still a long way to go.

“We’re still figuring some things out,” he said. “I’m harping on some of the things our kids are doing. Our young kids have lots of talent, they just have to get a little more confident with things and understand things a little bit. We’ve just got to clean things up a little bit.

“The hard part right now is we’ve got all these games scheduled and not a lot of practice, but it’s one of those seasons where that’s kind of what the beast is right now. I think we’ll get better through these (next couple weeks) and go into Christmas break in a good spot.”

Regardless of how things ultimately end up unfolding this season and however much the emphasis remains on getting better for the next opponent, Chase knows that given the ongoing COVID-19 pandemic — and the way his team had last year’s bid for a fourth straight WIAA Division 2 state title end abruptly in the state semifinals due to the pandemic — appreciating the moment is of utmost importance.

“In all honesty,” he said, “we’re just really looking at this as an opportunity. Every day we get to be together, it’s a special time. After what happened to us last year, you just don’t know what’s going to happen. Any time we get to step out on the court to play, it’s a special night.

“And that’s how we treated it tonight — December 10, 2020, is a special night and a chance to play basketball.”

Beaver Dam's Avery Stonewall (32) reaches to corral a pass into the post before attempting a basket in the paint during the first half of the Golden Beavers' 89-31 win over Appleton Xavier on Thursday night at Beaver Dam High School.

Beaver Dam's Riley Czarnecki (40) attempts a basket from the right block during the first half of the Golden Beavers' 89-31 win over Appleton Xavier on Thursday night at Beaver Dam High School.