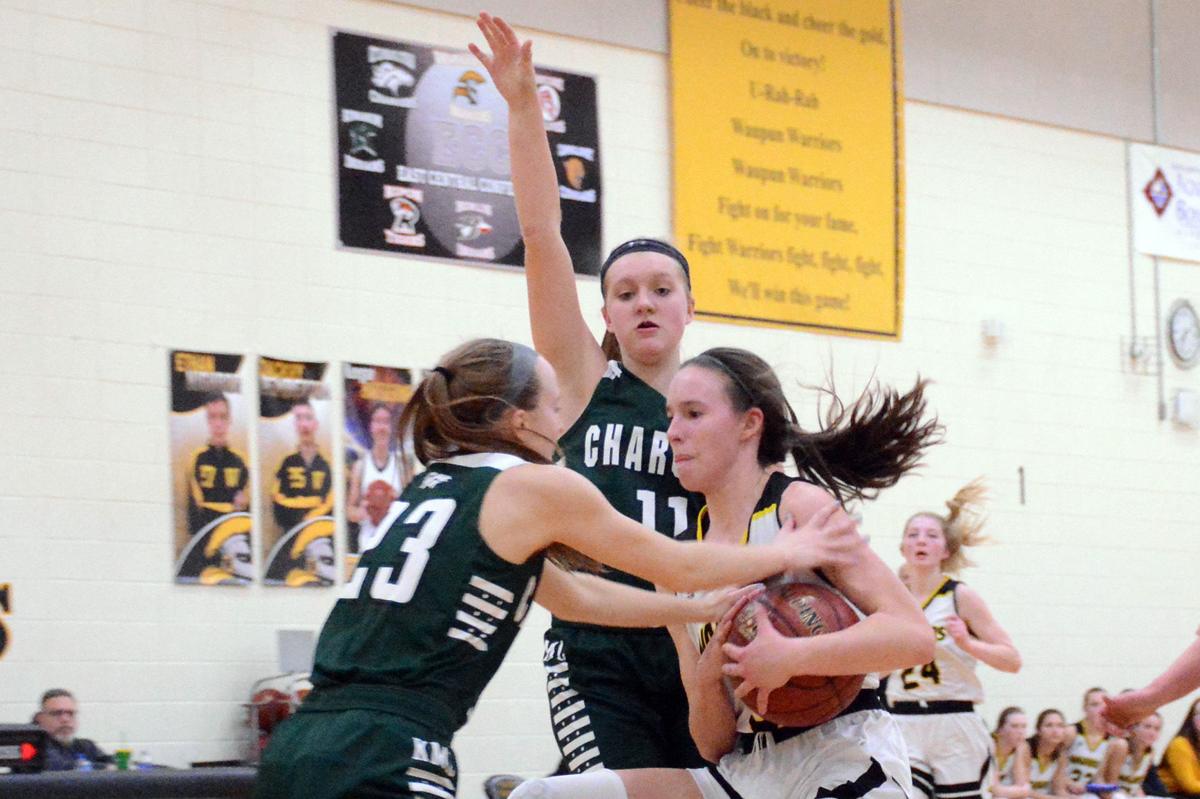 Waupun's Abbie Aalsma (right) drives to the basket during the first half of the Warriors' 69-54 win over Kettle Moraine Lutheran on Jan. 31. 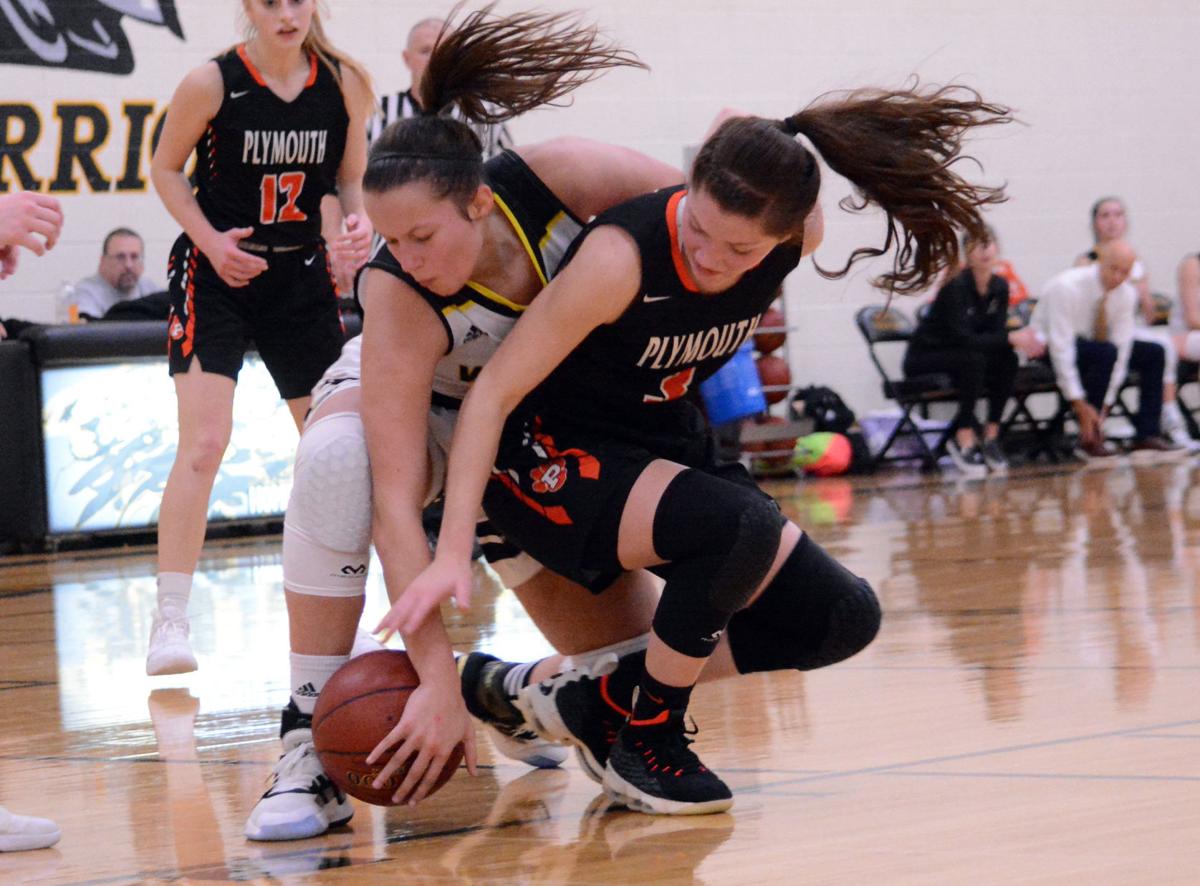 Waupun's Gaby Matamoros (left) fights for a loose ball with Plymouth's Sierra Grimm during the first half of a 63-35 win over the Panthers on Dec. 6.

For Waupun’s prep girls basketball team this season, that ingredient is defense.

The Warriors are allowing only 40.0 points per game this year and have given up more than that just five times during their current 14-game winning streak, with the most recent victories coming by scores of 70-41 over Campbellsport last Tuesday and 63-39 at Berlin on Friday to clinch the outright East Central Conference championship — the team’s first league title since finishing as co-champs with Kiel in the Eastern Wisconsin Conference in 2014-15.

“It’s culture and chemistry,” Warriors coach Tim Aalsma said of how it is that Waupun — ranked fifth in Division 3 in the WisSports.net coaches poll and eighth in D3 by the Associated Press — has gotten on such a roll. “Throughout the year we have developed an identity of defense being our mindset, and everything has kind of gone from there. The team has really bought into it.”

Aalsma said things really took off following a 61-50 loss to Kettle Moraine Lutheran on Dec. 17, which came a week after the Warriors suffered a 66-55 non-conference loss to Watertown Luther Prep.

Waupun was 5-2 at that point, not exactly cause for alarm. But the Warriors had allowed 49 or more points in four of their first seven games, and with some lofty goals in front of them, they knew that kind of defense couldn’t continue.

They responded with a 52-30 non-conference win over Fort Atkinson in their next game on Dec. 27, tying a 62-30 victory over Winneconne a few days later for the fewest points they’ve allowed to an opponent all year.

Like that, the Warriors were off and running again. And they haven’t stopped running, now with a 19-2 overall record heading into Thursday night’s season finale vs. Ripon.

“Everything throughout that 14-game winning streak has been through our defense,” said Aalsma, who heaped praise on assistant coach Dan Wuecherer for orchestrating the stingy ‘D’ with game-planning and attention to detail in practice.

Peyton McGinnis, Abbie Aalsma and Naomi Aalsma have been the catalysts of Waupun’s defense, all with different strengths that matched up just right can make it very difficult for opposing offenses to get into any kind of rhythm.

But it’s been Gaby Matamoros, McKenna Cunningham and Delaney Stelsel who have taken the Warriors from good to great.

“It’s really been the evolution of those three that has brought us to the level that we’re at,” Tim Aalsma said. “It was about being able to work through that threshold of being tired, and giving more than you think you’re capable of. And once we were able to do that, we realized we can be pretty dang good.”

It’s certainly shown. The 66 points and 61 points the Warriors gave up in their only two losses of the year during that December stretch remain the most they’ve allowed in a single game, and in fact, they’ve only allowed more than 43 on two occasions since — in a 69-54 win over KML on Jan. 31 and a 64-51 win over Winneconne on Feb. 6.

Abbie Aalsma — the Warriors’ leading scorer at 19.4 points per game — had a game-high 21 points in the title-clinching win over Berlin, the only one for Waupun to finish in double figures. But seven others chipped in, including McGinnis (16.0 per game) and Matamoros (5.4) with nine apiece.

Scoring balance has been another ingredient in Waupun’s success.

“Offensively,” Tim Aalsma said, “we’re way more well-rounded than we were at the beginning of the year.”

That’s the way it’s supposed to go. The blueprint for success is to be playing your best at the end of the year, and that’s exactly what Waupun is doing.

The Warriors have been playing pretty good for the last two months, as a matter of fact. But despite that, and despite the fact their record is better than Marshall (14-4), it was the the two-time defending state champion Cardinals who got the No. 1 seed and the Warriors the No. 2 seed in the upcoming D3 playoffs.

Marshall is ranked sixth in both polls, meaning Waupun is higher in the coaches poll but lower in the AP poll. On paper, though, the ECC is stronger than the Capitol South, which has only one team other than the Cardinals with a winning overall record compared with four teams with winning records in the ECC.

That coupled with Waupun’s better overall record lends support to the fact the Warriors have more quality wins and a stronger case to be the top seed.

Tim Aalsma thinks so, too.

“Marshall is obviously a pretty good team (but) I felt we were deserving of the one,” he said. “I won’t comment any further than that. It is what it is. Whoever we play we’re going to be prepared.”

Waupun has a bye in the regional quarterfinals and will play the winner of No. 7 seed Columbus and No. 10 seed Ripon in the semifinals on Feb. 28. Third-seeded Laconia would likely await in the finals, and then if things go according to seeding, the Warriors would play Marshall in the sectional semifinals on March 5 at Lomira High School.

The Warriors have been to sectionals six straight years dating back to 2014 and are as good this year as in any year during that stretch. But they have yet to make it to the state tournament, something Tim Aalsma isn’t concerning himself with now even though he knows it’s entirely possible the drought comes to an end in a few weeks.

“We’ve got some work ahead of us,” he said, “but I’m confident with the group that we have, that whomever we play we’re going to give them a really good game.

“And then if things fall the right way, we’ve got a shot to get there.”

Waupun's Abbie Aalsma (right) drives to the basket during the first half of the Warriors' 69-54 win over Kettle Moraine Lutheran on Jan. 31.

Waupun's Gaby Matamoros (left) fights for a loose ball with Plymouth's Sierra Grimm during the first half of a 63-35 win over the Panthers on Dec. 6.