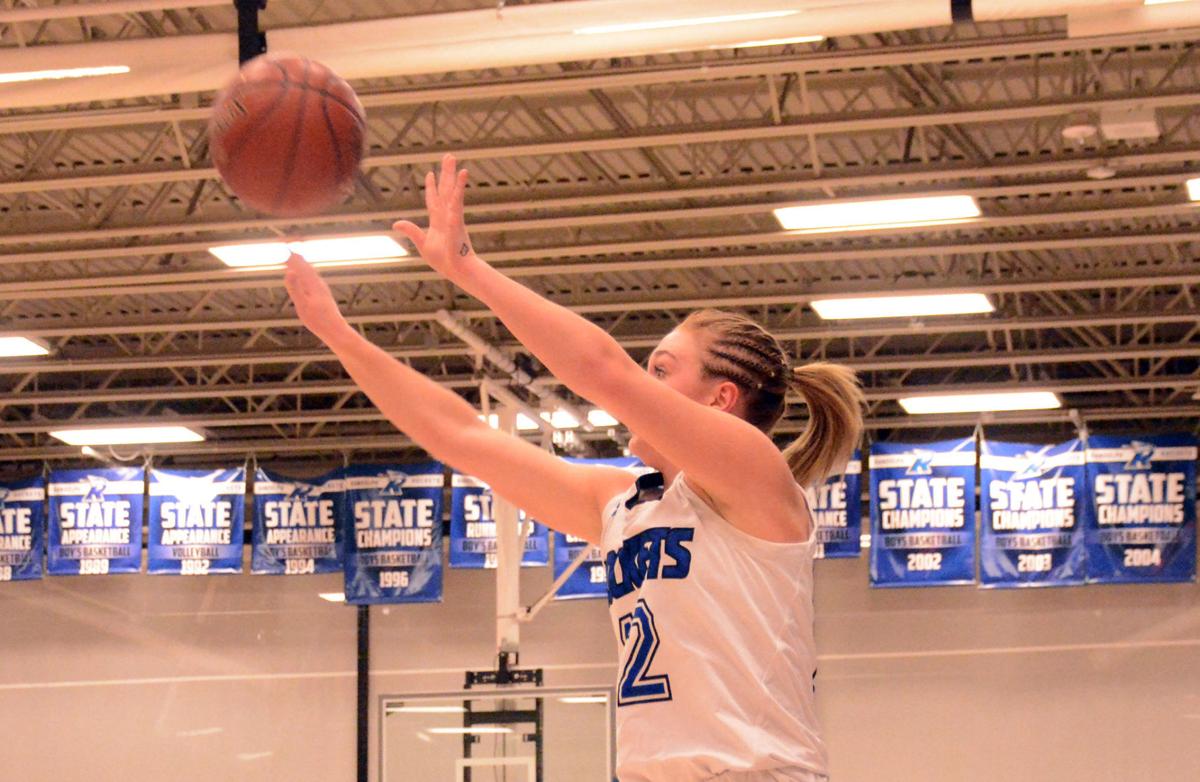 With this 3-pointer in front of the Princeton/Green Lake bench, Randolph's Brianna Prieve reaches 1,001 career points during the first half of Thursday's Trailways West Conference game in Randolph. 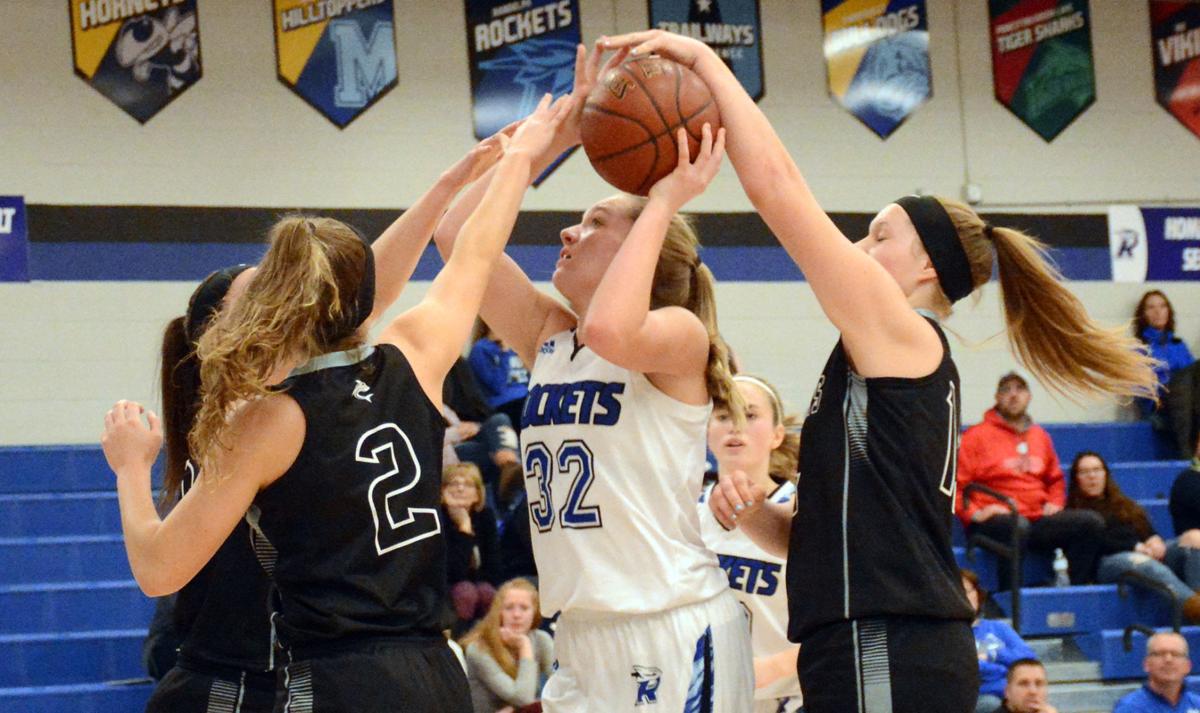 Randolph's Jorey Buwalda, middle, is fouled on a shot attempt during the first half of Thursday's Trailways West Conference game against Princeton/Green Lake in Randolph. 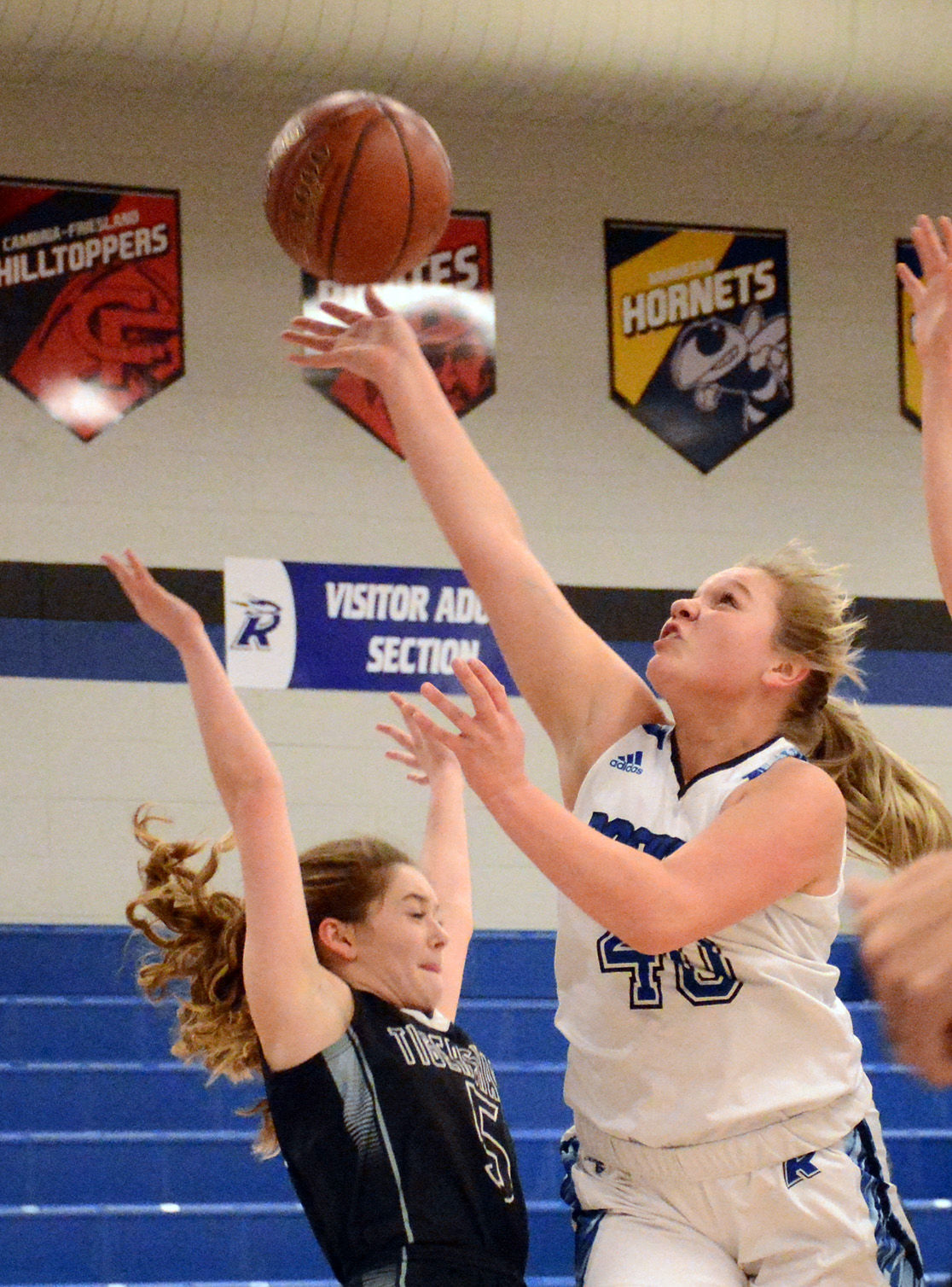 Randolph's Brianne Baird goes up for a shot during the first half of Thursday's Trailways West Conference game against Princeton/Green Lake in Randolph.

RANDOLPH ― Randolph coach Chad Kaufman doesn’t normally call timeout after a 3-pointer puts his team ahead by 14 points, but that’s what he did with 3 minutes, 55 seconds left in the first half of Thursday’s Trailways West Conference game against Princeton/Green Lake.

He did it because the one who made it, senior Brianna Prieve, scored her 1,000th career point with the bucket, becoming just the sixth player in program history to reach the milestone, and he wanted the team and the fans to celebrate the moment.

Prieve finished with a team-high 18 points as she led the Rockets to a 57-32 victory over the TigerSharks.

“It’s a special moment for her,” Kaufman said. “She’s worked really hard to get to this spot. She’s worked countless hours through the years. I’ve had the opportunity to coach her for three years. I know how much time she puts in outside of practice in the gym. And a moment like that, reaching a milestone where only six girls have done it for the Randolph girls program through the years, she needed a moment to be recognized in front of the crowd at that point.

“I’m not worried about using a timeout there. It was well deserved.”

Prieve currently has 1,013 career points. With a 15.4 points per game average and seven games left in the regular season, Prieve is on pace to score 108 more points during the regular season, which would place her ahead of 2017 graduate Morgan Paul’s 1,030 points, and depending on how deep the Rockets go in the postseason could move her up the leaderboard.

The win also put Randolph (12-3, 7-2 Trailways West), ranked 10th in Division 5 in the Associated Press poll, at second place in the conference race. Both Randolph and Princeton/Green Lake (10-6, 6-3) were tied entering Thursday’s contest.

“It was our energy,” Prieve said. “We were ready for it. We were going to match their aggressiveness, which we weren’t really ready for (at their place). We knew they’re an aggressive team, but we would always come back in the second half. When they play (at home) they’re a different type of team. We were ready to match it.”

“Tonight, we just came out and wanted to establish our defensive intensity,” Kaufman said. “Our goal was to keep them under 40. We did that. I thought we pressured their shots for the most part on every possession. We did a fairly good job on (Emerald Konkel, who finished with seven points) who is one heck of a post player. She can play it facing the basket and she can step out on the perimeter.”

The difference in this game was that not only did Prieve get hot, but freshman Jorey Buwalda also got hot with 18 points and 15 rebounds.

“Jorey has done a very, very good job on the rebounding aspect, on the offensive end and defensive end,” Kaufman said. “She’s averaging 13.5 on the year. It’s great for us to get second-chance opportunities with her. I’m really going to enjoy having her for three more years.”

After the Kelsey Morgan’s layup dropped to make it 21-10 with 5:31 left, Prieve was still trying to find her rhythm. Up to that point she missed all three of her attempts (one layup and two triples). That is until she found her sweet spot in front of the TigerSharks’ bench and let it rip to make it 24-10 with 3:55 left.

“Oh my gosh, it was almost like a relief,” Prieve said. “I knew I was going to get there, but I didn’t know when and I didn’t want it in my last few games where I was scoring most of my points in the second half. It was kind of like, ‘Oh my gosh, I got it, but let’s get back to playing. There’s still a game to be played, it’s only the first half.’"

She would make two more triples to finish the first half with nine points and help the Rockets go into halftime with a 33-14 lead.

“I think it was mostly the nerves and I usually always start out the game slow, but this was slower than I expected in this game,” Prieve said. “I was ready, but I guess the nerves really did catch up to me.”

And now, the Rockets will travel to Pardeeville for a Trailways West Conference game next Tuesday. The last time these two teams met the Bulldogs outlasted the Rockets 45-38 on Dec. 9.

FALL RIVER – Sam Leisemann got Fall River’s quest for a return trip to the girls state tournament in Green Bay off on the right foot Tuesday.

COLUMBUS — Defense has not been an issue for Columbus’ prep girls basketball team, at least not since the calendar turned to February.

RIO — Not wanting to enter the postseason on a losing streak, the Rio girls basketball team used Thursday’s non-conference game against Horico…

With this 3-pointer in front of the Princeton/Green Lake bench, Randolph's Brianna Prieve reaches 1,001 career points during the first half of Thursday's Trailways West Conference game in Randolph.

Randolph's Jorey Buwalda, middle, is fouled on a shot attempt during the first half of Thursday's Trailways West Conference game against Princeton/Green Lake in Randolph.

Randolph's Brianne Baird goes up for a shot during the first half of Thursday's Trailways West Conference game against Princeton/Green Lake in Randolph.