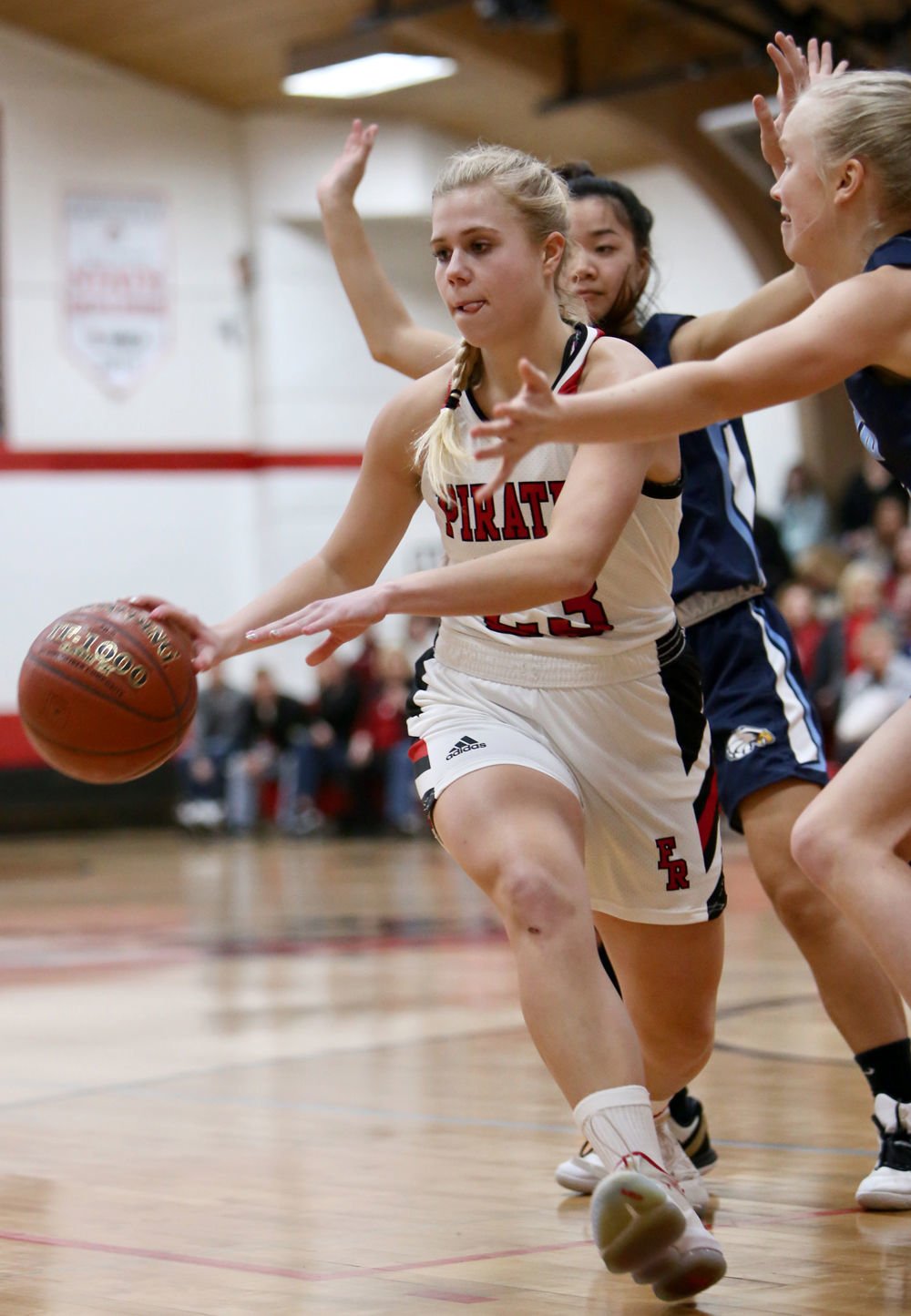 Fall River's Lexi Rozinski passes to avoid defensive pressure during the Pirates' 77-16 thrashing of Madison Country Day on Tuesday. Rozinski, a senior, reached the 1,000-point milestone in the contest. 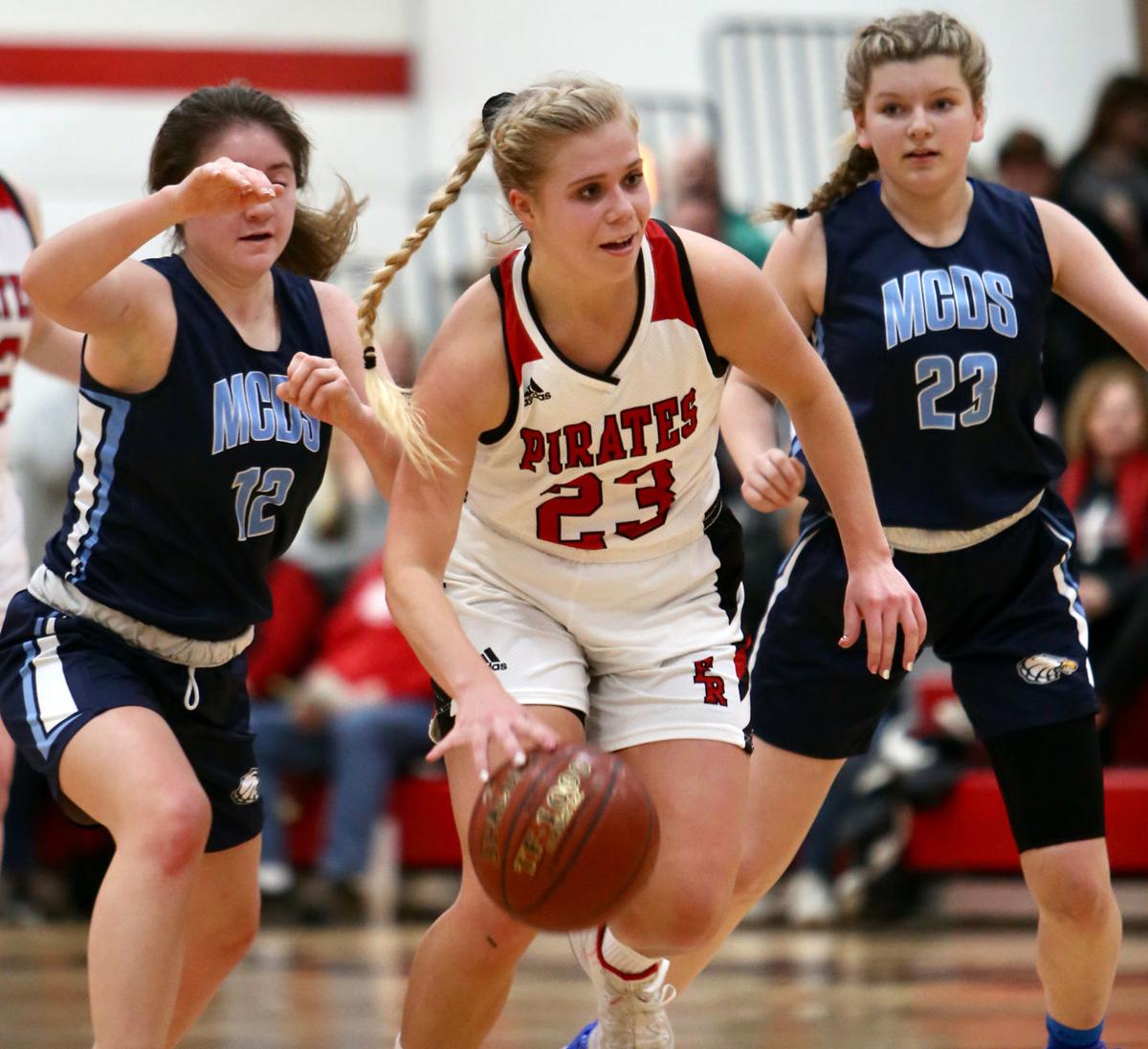 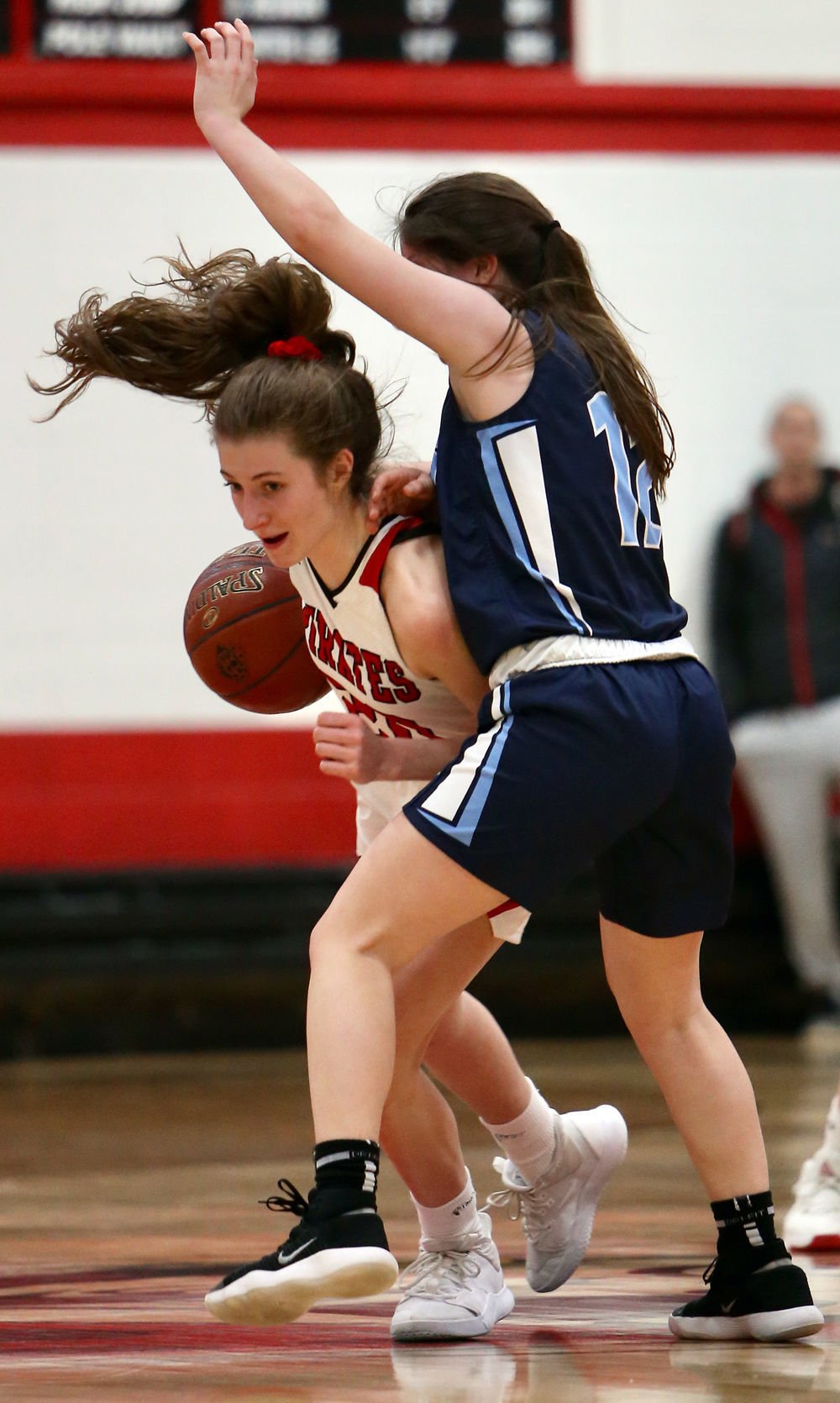 FALL RIVER – Sam Leisemann got Fall River’s quest for a return trip to the girls state tournament in Green Bay off on the right foot Tuesday.

The 6-foot senior center fueled a 21-0 run by the Pirates to open the game and finished the night with a game-high 23 points as second-seeded Fall River overwhelmed visiting and 15th-seeded Madison Country Day 77-16 in the WIAA Division 5 regional quarterfinals.

Leisemann had nine points during that opening stretch as the Prairie Hawks (1-22) went nearly 10 minutes (and eight turnovers) before scoring their first points. The only drama on the night for Fall River (22-1) was to see if senior guard Lexi Rozinski could reach the 1,000-point milestone. Rozinski ended the suspense when she hit two free throws with 9:46 left in the game, touching off a celebration that included fans in the stands waving 1,000-point signs. Rozinski would finish the night with 18 points, 10 rebounds, eight steals and words of praise from Pirates' coach Jim Doolittle.

“We weren’t going to change our game plan but we were really going to try to help her to reach that tonight,” Doolittle said. “Early in the game you could she was a little nervous. But right at the end, she was like ‘OK, this is mine.’ And true Lexi, she went and got her 1,000 points. I’m very proud of her. It is quite an accomplishment.”

Leisemann, who’s already in the 1,000-point sorority, couldn’t be stopped on Tuesday. She finished the first half with 17 points as the Pirates took a 48-4 lead into halftime. By the end of the night, she also had four blocks and pulled down 10 rebounds and is nearing the 1,000-rebound mark to add to all of her accomplishments at Fall River.

“Sam played terrific,” Doolittle said. “They really didn’t have any size to counter her underneath and she took advantage.”

Only three players got in the scoring column for the 15th-seeded Prairie Hawks with sophomore Sara Donoso leading the way with 11 points. Fall River got scoring contributions from 10 players as Doolittle was able to use his bench freely throughout the contest.

The Pirates, ranked fourth in Division 5 by the Associated Press, advance to Friday's regional semifinals against seventh-seeded Rio, a team they defeated twice during conference play. The regional championship will be played Saturday night.

“Tonight was a super outing by the kids,” Doolittle said “and that’s how you want to start your tournament.”

Fall River's Lexi Rozinski passes to avoid defensive pressure during the Pirates' 77-16 thrashing of Madison Country Day on Tuesday. Rozinski, a senior, reached the 1,000-point milestone in the contest.