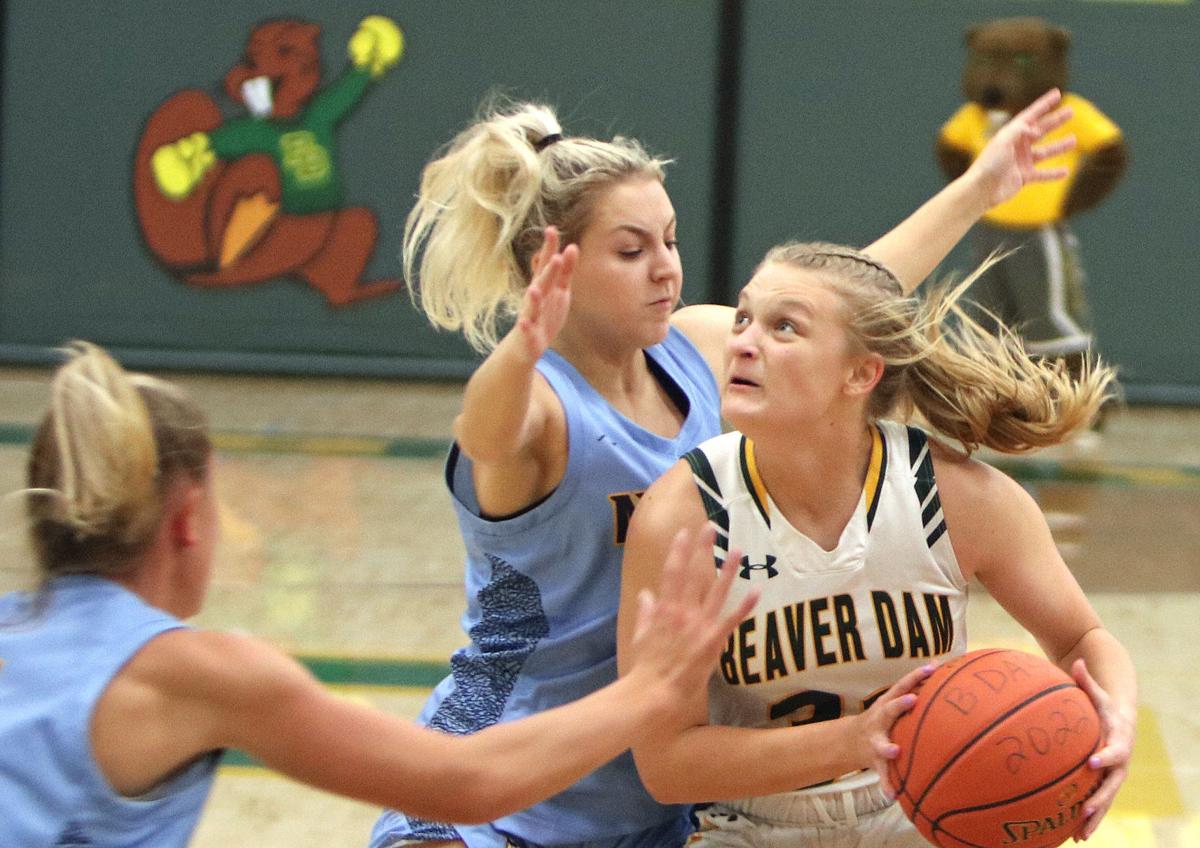 Beaver Dam's Carlee Lapen (right) tries to fight her way to the basket during the first half of Tuesday night's season opener against Sheboygan North. 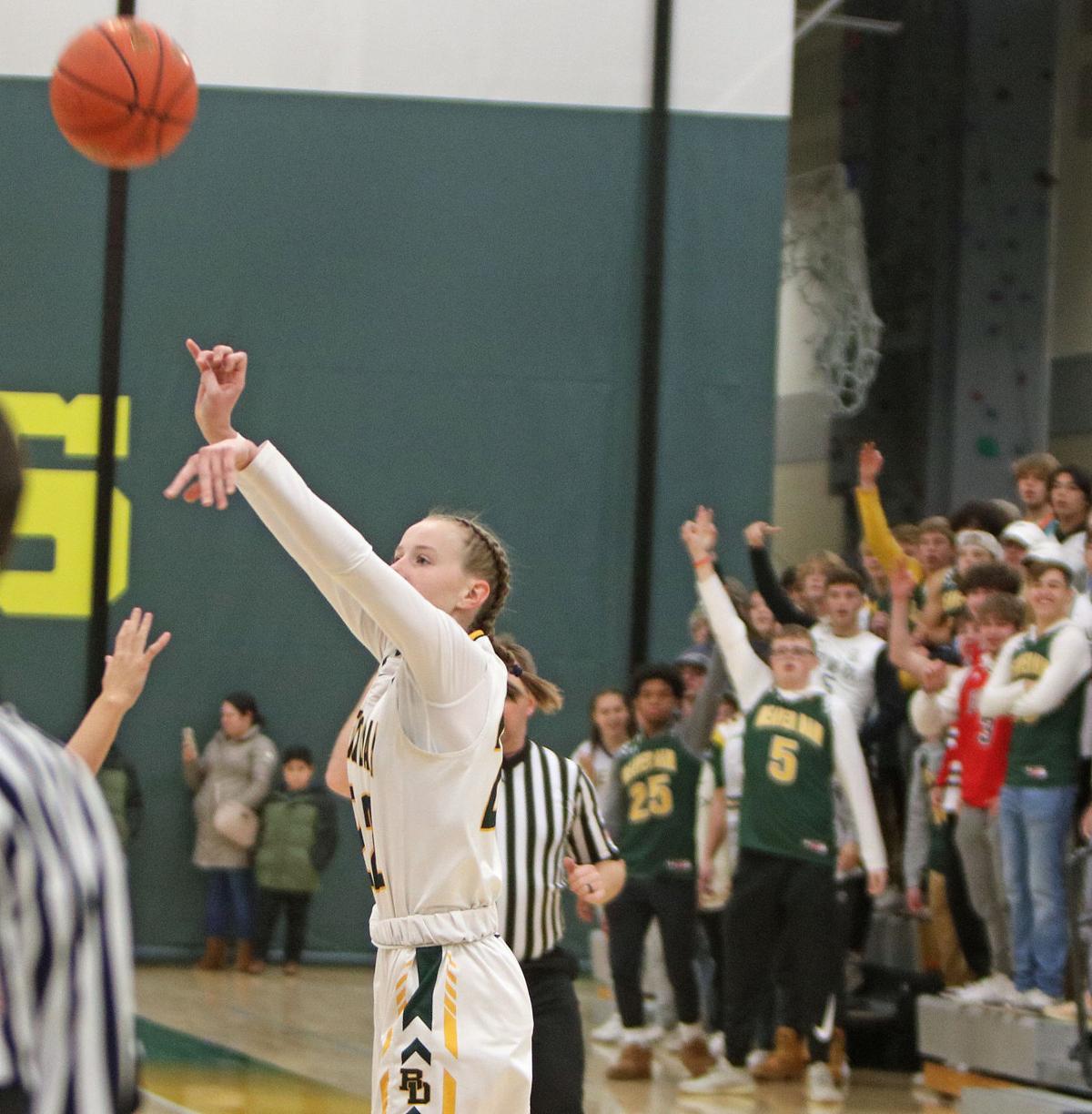 Beaver Dam's Bella Oestreicher attempts a 3-pointer during the first half of Tuesday night's season opener against Sheboygan North.

A lot of new faces were in the starting line-up for the Beaver Dam girls basketball team in Tuesday night’s season-opener against Sheboygan North.

But some things never change.

The Golden Beavers pressed on defense all night long, pushed the ball up and down the floor and — and this part was as familiar as anything — rained 3-pointers from beginning to end, winning 83-43 over the Raiders to kick off 2021-2022 on the right foot.

“We still like to take them,” Beaver Dam coach Tim Chase said. “I love the 3-point shot, but we do need to get a little more balanced.

“Our kids are really good at them — they work at it a lot — but we do need to get a little more balanced.”

No need to on Tuesday.

Sophomore guard Annika Salettel knocked down a trio of first-half jumpers from beyond the arc — from right of the circle to get Beaver Dam on the board in the opening minutes, from the top of the key and then from the left corner with 8 minutes, 51 seconds to go in the half to make it 22-15, the Golden Beavers biggest lead of the night to that point — and Beaver Dam led by 15 at the break, 39-24.

Salettel wasted little time getting Beaver Dam going again after halftime, hitting another 3 — her fourth and final one of the night — from the left corner a minute in to make it 42-24.

And then sophomore forward Gabby Wilke, who had six points before halftime and ended with a game-high 16, drained three straight triples — two from the left corner and one from the right wing — in the span of a minute and a half to make it 51-24 just 3 minutes into the half.

The Golden Beavers were on a roll.

“Throughout the game we just really fell into our patterns and started getting momentum,” said Salettel, who had 14 points. “Once you get going, it’s great.”

Indeed. And Beaver Dam never let off the gas the rest of the way, getting scoring contributions from 11 players in all — junior forward Kylie Wittnebel also had 14 points, junior guard Bella Oestreicher had nine and sophomore guard Carlee Lapen had eight to round out the leaders — on the way to a season-opening blowout.

“It’s a 36-minute game — you’ve just got to keep on going. You can’t let up no matter what the score is,” Chase said. “It was good to see that we could extend the lead in the second half, because sometimes those games can go the other way.”

The way Beaver Dam eventually shifted into fifth gear on Tuesday, going the other way — shifting into neutral, even — was out of the question.

“I love our pace,” Chase said. “This is what we’ve seen in practice. We did what we needed to do tonight. I liked our tempo — we’ve got a lot of things to fix, but I like a lot of things we’re doing.”

He also liked the atmosphere the student section provided for after a year of playing in front of empty bleachers because of the pandemic.

“I love our energy — our energy was great,” he said, owing some of that to feeding off the fans.

After that, Beaver Dam will play Platteville and Madison Memorial on Friday and Saturday in the invite the Golden Beavers are hosting over the weekend before hitting the road for another conference game at Baraboo, a fellow north division foe out of the Badger West.

“We’ve got a deep team so we’ll get a lot of kids a chance to play,” Chase said of the rigorous five-games-in-a-week stretch. “We’re going to learn a lot about ourselves between now and Thanksgiving break.

“We’re not always going to be perfect, but we’re going to keep on working to get better.”

The Thunderbirds started strong but got sped up by the relentless Golden Beavers and failed to keep pace from there.

Beaver Dam's Carlee Lapen (right) tries to fight her way to the basket during the first half of Tuesday night's season opener against Sheboygan North.

Beaver Dam's Bella Oestreicher attempts a 3-pointer during the first half of Tuesday night's season opener against Sheboygan North.