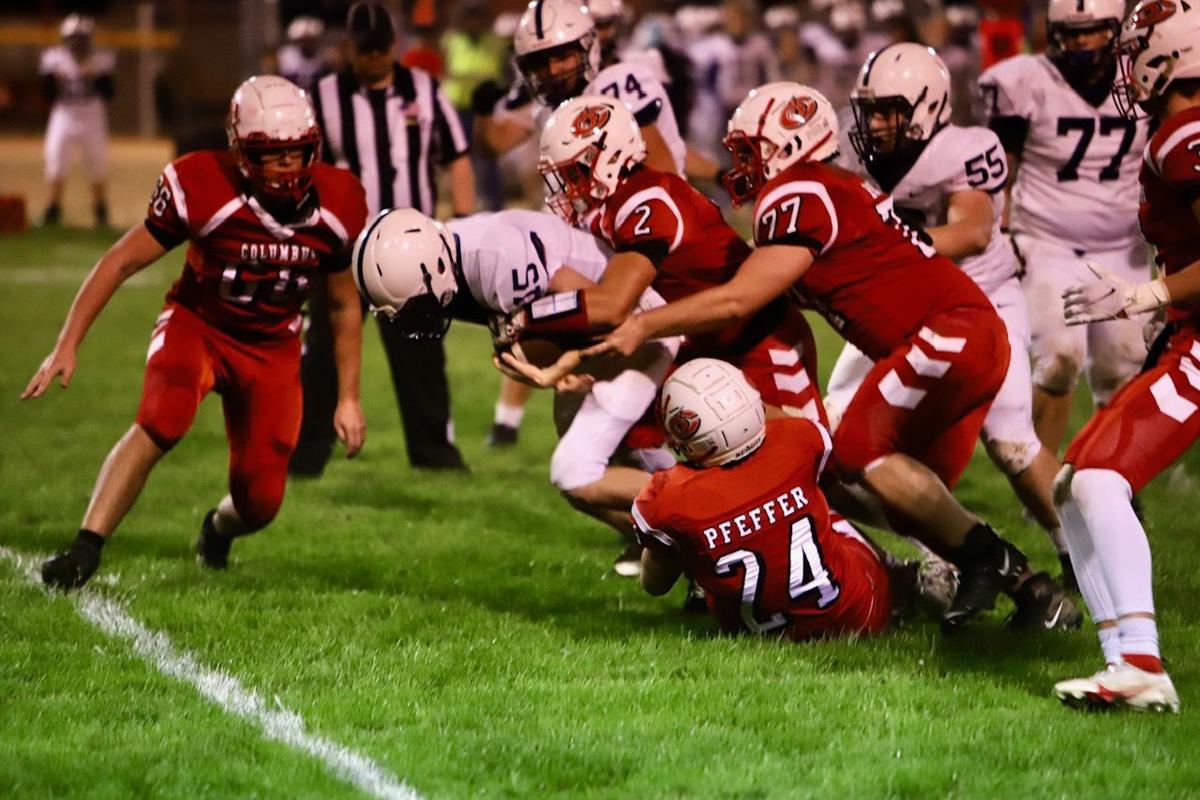 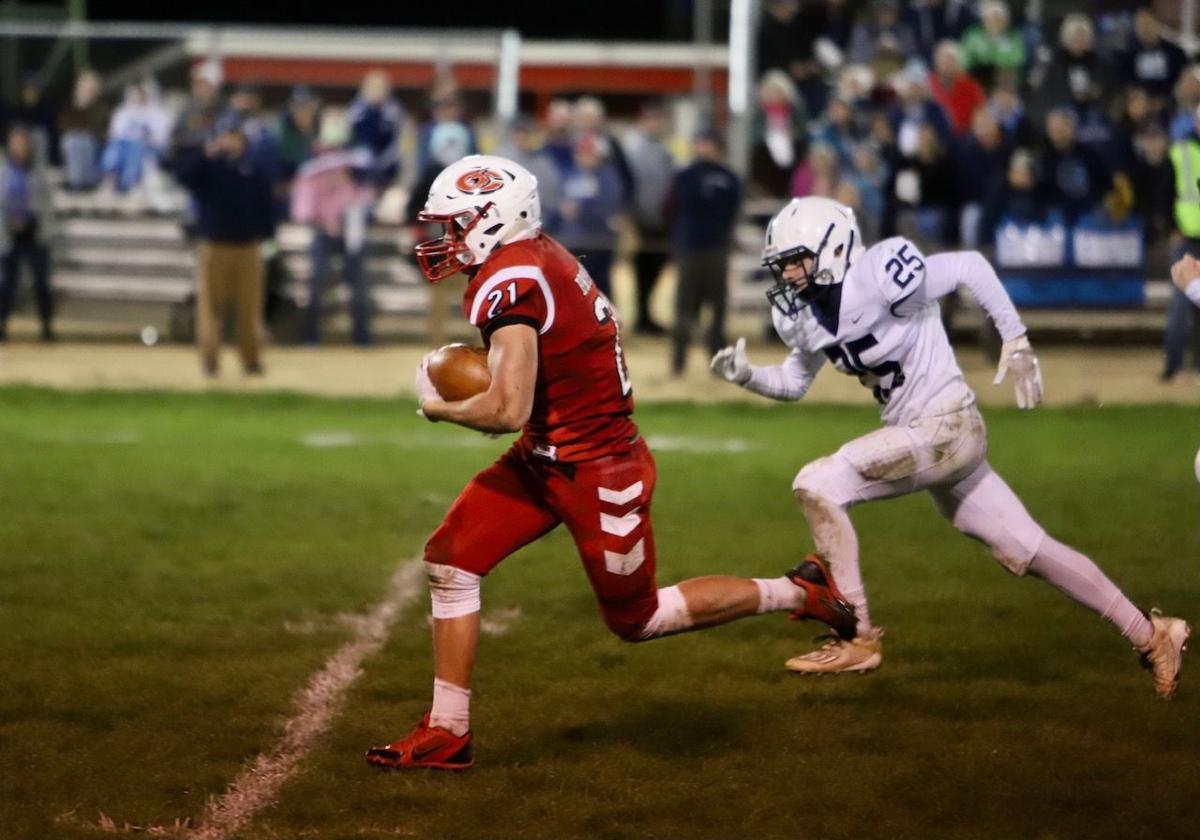 Colton Brunell breaks into the open en route to a 55-yard TD on the second play of third quarter. 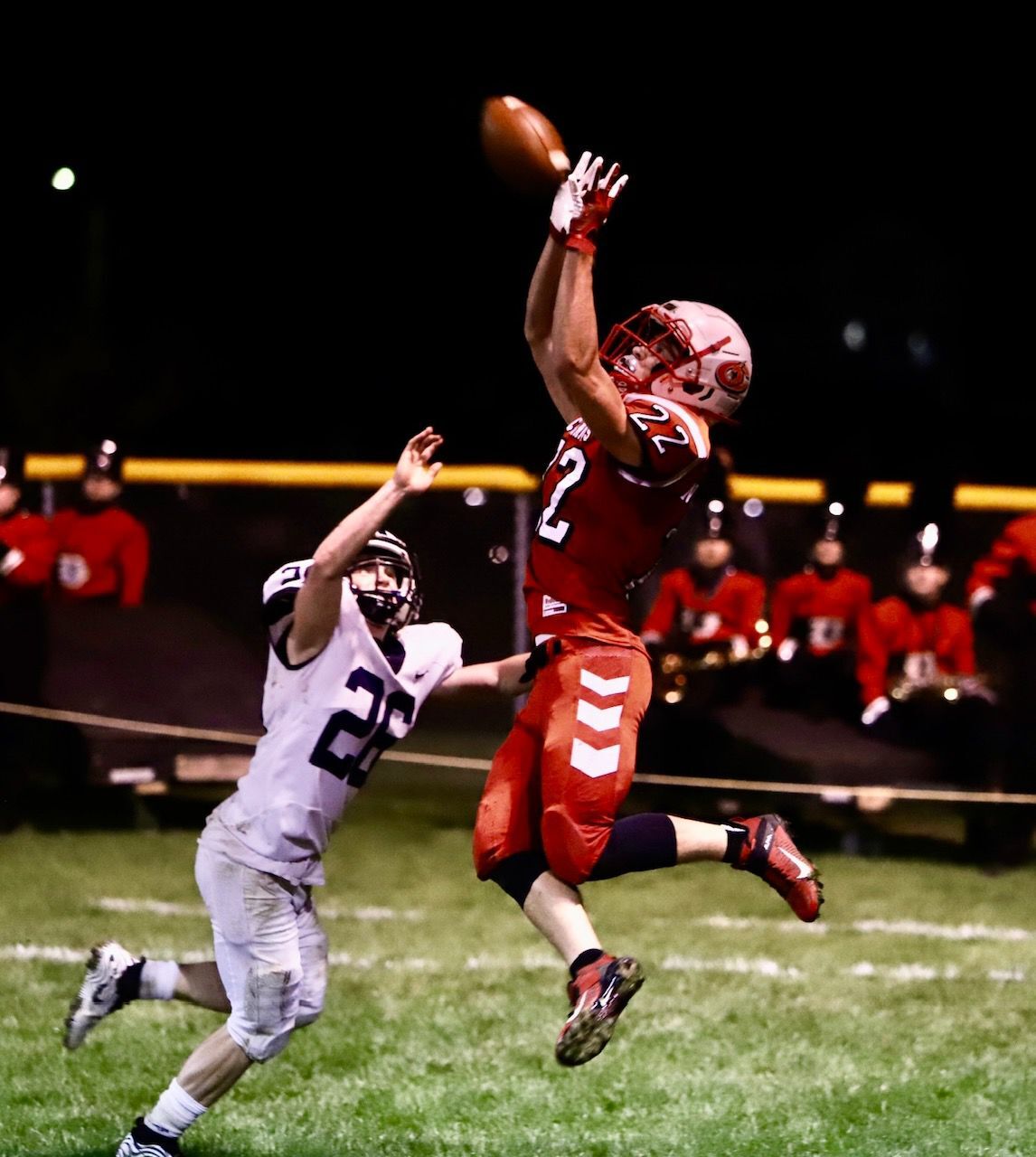 Cards’ Braxton Nachreiner (22) goes up to haul in  a second quarter touchdown pass. 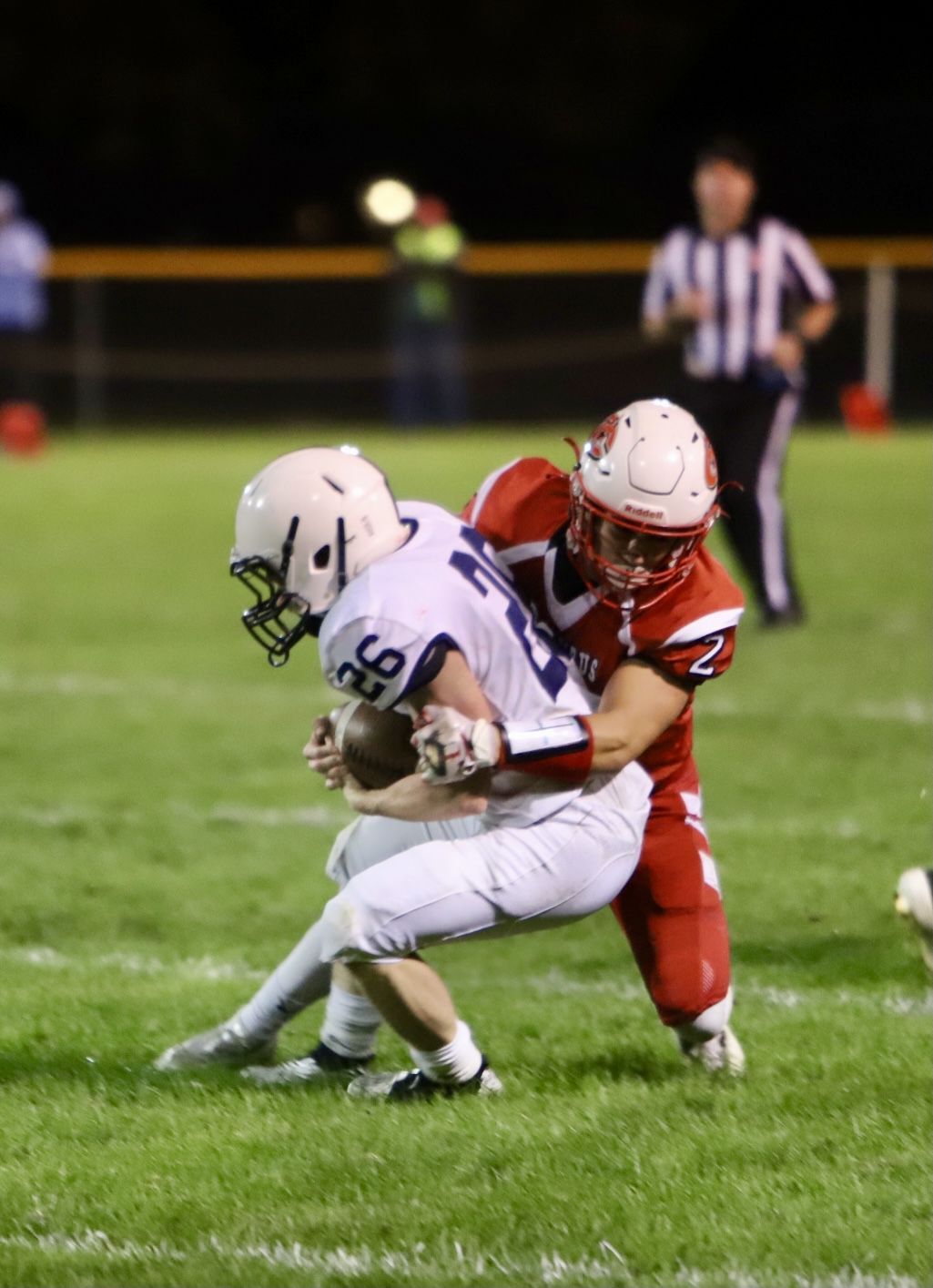 COLUMBUS — Colton Brunell admitted he was caught off guard when he saw Lakeside Lutheran march down the field and score on its first possession Friday night. It was the first time all season Columbus had trailed in a contest.

“Usually, our defense sets the tone but that wasn’t the case tonight,” said Brunell, the Cardinals’ sophomore running back. “We got frustrated and decided we needed to take it to them on offense.”

And did he ever. Brunell rushed for four touchdowns and 285 yards to lead Columbus to a 49-21 victory over the Warriors, a win that gave Columbus (6-1, Capitol, 8-1 overall) a share of the Capitol Conference title, the Cardinals’ first since 2016.

Brunell had an assist on the offensive end as junior quarterback Nathan Cotter threw for two scores as the Cardinals, ranked sixth in Division 4, now await their playoff assignment.

Lakeside (4-3, 4-5) entered the contest with two losses in conference by a total of four points and the Warriors put up quite the fight in the first half.

Junior Nate Yaroch capped their opening drive with a 1-yard plunge, a score that was quickly answered by Brunell, who carried the ball on all five plays of a 56-yard scoring drive.

“We knew they (Lakeside) were a good team,” Columbus coach Andrew Selgrad said. “They run the triple option really well and we knew if we weren’t doing our job we’d be in a dogfight. … They had an excellent game plan and we just didn’t execute as well as we could, but we made the adjustments and took care of business.”

Brunell helped with the adjustment when answered Lakeside's score with a 47-yard scamper to make it 14-14 with 6:36 remaining in the first half.

Brunell gave Columbus what would prove to be the lead for good, 21-14, when he ran it in from 15 yards out with 2:15 to play in the half. The Cardinals tacked on seven more points with 10 seconds remaining in the half when Cotter found Braxton Nachreiner in the corner of the end zone for a 16-yard TD.

If the Warriors had any hope to find their way back into the contest in the second half Brunell quickly quashed them in the third quarter. He took Columbus’ second play from scrimmage 55 yards for the score, giving the Cardinals a commanding 35-14 lead and a chance for Selgrad, the first-year coach a chance breathe a bit more easily.

“Our offensive line was dominating the line of scrimmage all night,” said Selgrad. “They gave him (Brunell) the holes that he needed, and he’d be the first to admit that.

“He’s a hard runner, a special kid, and a very important part of our team,” Selgrad said.

Columbus’ other second-half scores came on a 1-yard run by senior Andrew Pfeffer in the third quarter and on a 7-yard pass from Cotter to Mason Carthew in the fourth quarter.

The Warriors’ only score in the second half came in the third quarter on a 9-yard run by Mlsna.

Columbus amassed 318 yards on the ground against Lakeside, the bulk going to Brunell who averaged 13 yards per carry.

Selgrad said the conference title was one goal the Cardinals could check off their to-do list. Now it’s on to playoffs.

“It’s the second season,” Selgrad said. “Every game could be your last. We want to keep winning. These guys want to stay together.”

The pair were recognized for two of the league's six individual honors while the Bulldogs, Hornets and Dodgeland combined for 30 all-conference picks.

The Cardinals tallied 13 selections, including four of the league's six individual honors, while the Blue Devils added a dozen all-league picks.

The rivals combined for 19 all-league selections, with the Rockets' Nikita Shankle being named the SBC Player of the Year. New Lisbon also swept Coach and Assistant Coach of the Year.

Fueled by a dominant ground game, the Cardinals easily turn away Kewaskum to advance to the state semifinals for the first time in 25 years

Cambria-Friesland's Owen Jones is co-Offensive Player of the Year and Randolph ropes in a barrel of first-team spots, among other area highlights

Mayville punches back all night, holds off Belleville to advance to state title game for first time in 15 years

Blake Schraufnagel rushes for 270 yards and all six of the Cardinals' TDs as they win for the fourth time this postseason over a higher-seeded team in the Division 5 playoffs.

Madison Edgewood's football season is over. Why a judge said he can't change that

Circuit Judge Jacob Frost said "it's a bed Edgewood made," that unfortunately came to light late in the football season.

The Blugolds finish the season with a perfect 14-0 record.

Colton Brunell breaks into the open en route to a 55-yard TD on the second play of third quarter.

Cards’ Braxton Nachreiner (22) goes up to haul in  a second quarter touchdown pass.