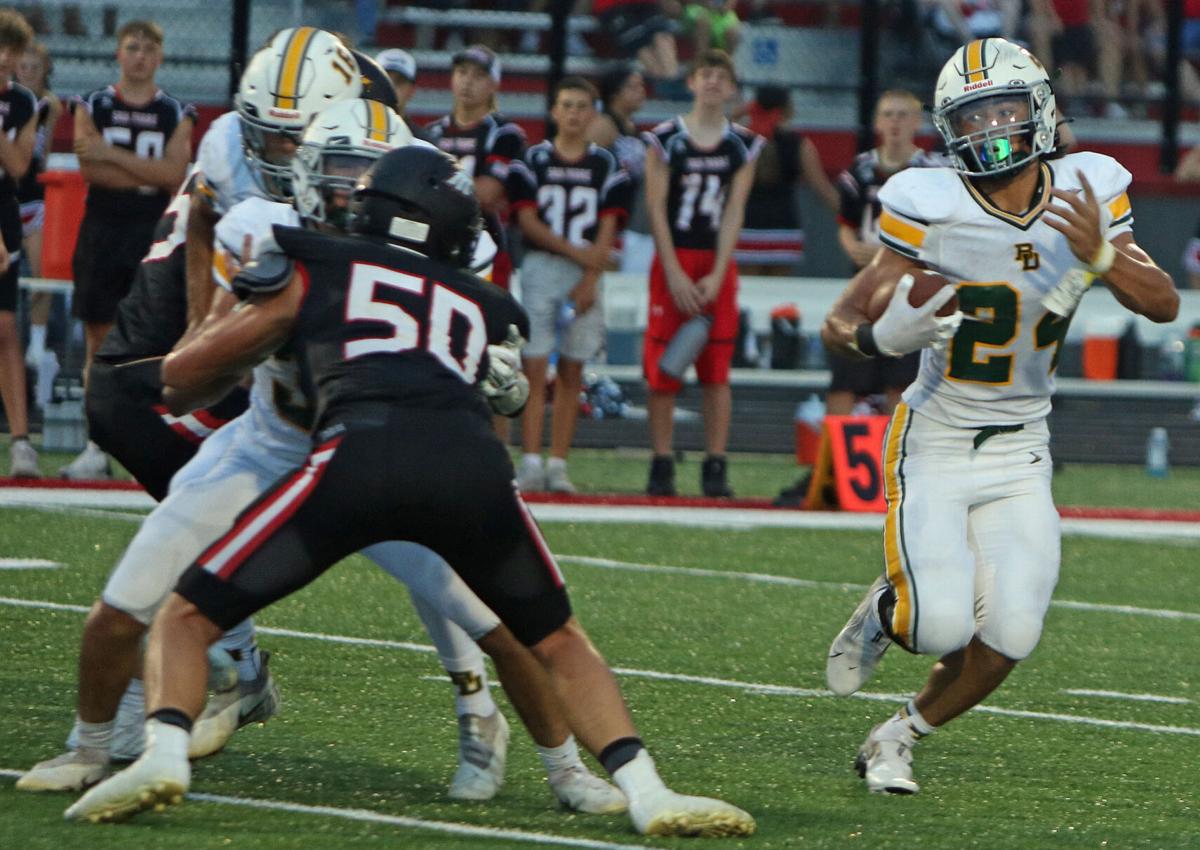 Beaver Dam's Gabe Klatt (24) picks up a block on the edge to make space for a few of his 185 first-half yards during last week's game against Sauk Prairie at Sauk Prairie High School in Prairie du Sac. 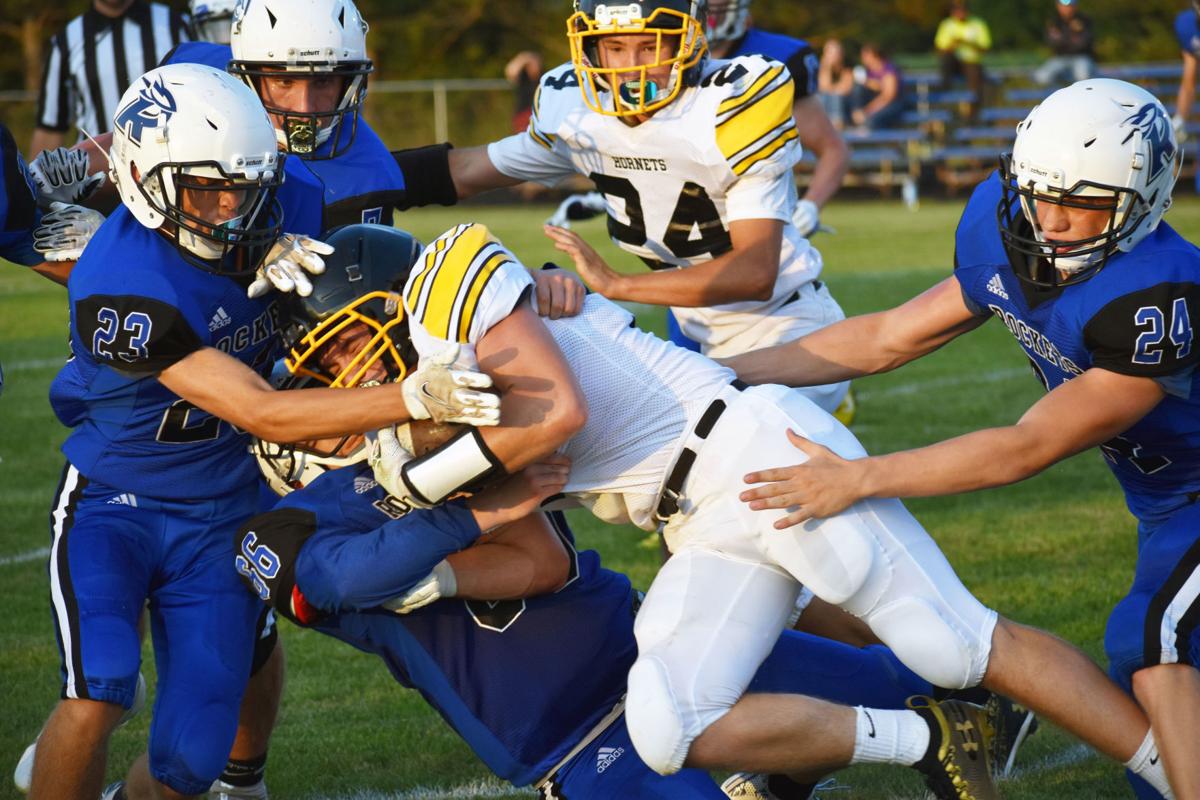 Randolph's Nolan Drews (23), Zander Padilla (66) and Jacob Kile (24) come together to bring down Rosholt's Blade Niewiadomski in the first half of a non-conference game in Randolph on Aug. 20. The Rockets take on Oshkosh Lourdes looking to top the Red Knights following a pair of losses last season.

With the advent of state-wide, football-only conference realignment, the first two weeks of the prep football season can be treated like tune-ups. They’re all non-conference games. They matter, but not as much as league games do. They’re just to get all the kinks outs and prepare each team for games that truly matter.

After COVID-19 got rid of a traditional postseason in 2020, this season brings out a new era. Now teams that moved over to different conferences and some conferences growing, new foes will finally meet. And with seven conference games — the majority of schools across the state are in 8-team conferences, while there are 16 seven-team conferences that have been joined in “Paired 7s” with a mutual conference crossover game — there’s a level playing field with teams needing to finish .500 or better to guarantee a place in the postseason.

Now with the opening tune-ups out of the way, the real games begin this week. Here’s some of the storylines to look out for in the first week of conference games.

Familiar rivals matchup out the gate

It’s the first week of league games and already the fans get to see Columbus and Lake Mills go to war in a Capitol Conference game.

The Cardinals are 2-0 to begin the season while the L-Cats suffered a 20-0 shutout by Edgewood last week and are now 1-1.

Lake Mills had an awful outing against the undefeated Crusaders. Quarterback Liam Carrigan completed 17-of-31 passes for 163 yards and no touchdowns. However, the Crusaders picked him off three times. Meanwhile, the Crusaders also did a number on the L-Cats’ run game, only allowing 41 yards on the day.

Edgewood used a two-quarterback system with Mason Falkers and Joe Hartlieb, who combined to throw for 120 yards. Falkers also ran for 20 yards and running back Cam Fane led all rushers with 128 yards and two touchdowns.

If Lake Mills struggles on defense again, look for the Cardinals to have a field day with their three main studs on offense.

Quarterback Nathan Cotter has completed 6-of-14 passes for 140 yards, two touchdowns and one interception. He’s also ran for 88 yards and another score.

While the aerial attack is still looking to take off, the Cardinals ground attack is scary good. The men up front get to block for some special talents in Colton Brunell and Andrew Pfeffer. Brunell has scampered his way for a team-high 286 yards and a five touchdowns while Pfeffer has maneuvered his way around defenses for 243 yards and two touchdowns.

And in only eight carries, Brady Link has 64 yards and a touchdown as well. Link is a major dual-threat as he leads the team with four receptions for 90 yards and two touchdowns as well.

Not to mention, the Cardinals’ defense has only given up six points while throwing up 76 points.

Hoping to stay on a roll

It shouldn’t surprise anyone seeing as Beaver Dam has a strong ground attack working. The Golden Beavers chewed their way through the Eagles’ nest for 360 yards and five touchdowns on the ground.

Gabe Klatt has hit the ground running for the Golden Beavers, racking up a team-high 332 yards on just 25 attempts and four scores through two games. The hard-running sophomore, who churned out 192 yards and two TDs last week, has ripping off 13.3 yards per attempt so far.

Alex Soto is also torching opposing defenses at a high rate. Despite having just 78 yards, Soto has done so on six carries (13 yards per attempt) and has hit paydirt twice.

Defensively, Beaver Dam continues to lean on Jaden Barstow. The senior defensive back has 32 tackles through two games, including a dozen solo, and is currently second in the state behind just Menominee Indian’s Andre Corn (33).

Barstow will definitely be called upon this week as the Golden Beavers face a stiff challenge in their Badger Large Conference opener as they host Milton.

The Red Hawks got down early last week and couldn’t catch up in a 26-14 loss to Badger last week, so this week is a match-up of two 1-1 programs.

The Golden Beavers will have to game plan for a two-quarterback system as Terrell Fisher has thrown for 128 yards and a touchdown while Cayden Zajac leads the team with 155 yards and two touchdowns.

Running back Zack Bothum leads the team with 92 rushing yards and two touchdowns. Meanwhile, Jackson Kohl and Jack Campion both have rushed for 32 yards. Campion has one rushing touchdown.

One team that’s probably surprised the entire state would be Waupun and it’s three-game winning streak.

Yes, the Warriors have won their first two games of the season, albeit narrowly edging out Menominee Indian, 22-20, at home last week. Still, Waupun will look to make it four in-a-row when it hosts Port Washington in an East Central Conference opener Friday.

Coach Ron Walters said their next big test will be if they can get that first league victory in four years.

The Warriors have one dimensional right now, but even without having a passing game, the run game looks like its tough to beat for any opponent.

The two-headed monster of Lucas Meyer and Ashton Campbell has paved the way on the ground. Meyer is averaging 11.4 yards a carry — rushing for 216 yards and two touchdowns on 19 carries. Meanwhile, Campbell has handled the bulk of the carries, rushing 32 times for for 213 yards and three TDs.

The Warriors will go up against a very good Port Washington team that is 1-1 on the season after defeating Pewaukee 15-7 last week.

The Warriors will have to play smart defensively, going up against a dangerous quarterback in Nate Uselding. The 6-foot-2, 180-pound junior has thrown for 374 yards and three touchdowns in the first two weeks. He’s also ran for 49 yards, which is second on the team behind Patrick Lippe’s 82 yards.

Uselding’s favorite target has been Lippe as well, as the pair has connected 19 times for 227 yards and two touchdowns.

NFL Futures: Sleepers In the West

NFL Futures: Sleepers In the West

All three area Scenic Bluffs Conference football teams are off to a 2-0 start.

Following a pair of tune-ups, the second phase of the prep football season kicks off this week with plenty of important league match-ups.

The Warriors held the Vikings to just 107 yards rushing to win the teams' Badger Small Conference opener and move to 3-0 for the first time since 2007.

Beaver Dam's Gabe Klatt (24) picks up a block on the edge to make space for a few of his 185 first-half yards during last week's game against Sauk Prairie at Sauk Prairie High School in Prairie du Sac.

Randolph's Nolan Drews (23), Zander Padilla (66) and Jacob Kile (24) come together to bring down Rosholt's Blade Niewiadomski in the first half of a non-conference game in Randolph on Aug. 20. The Rockets take on Oshkosh Lourdes looking to top the Red Knights following a pair of losses last season.