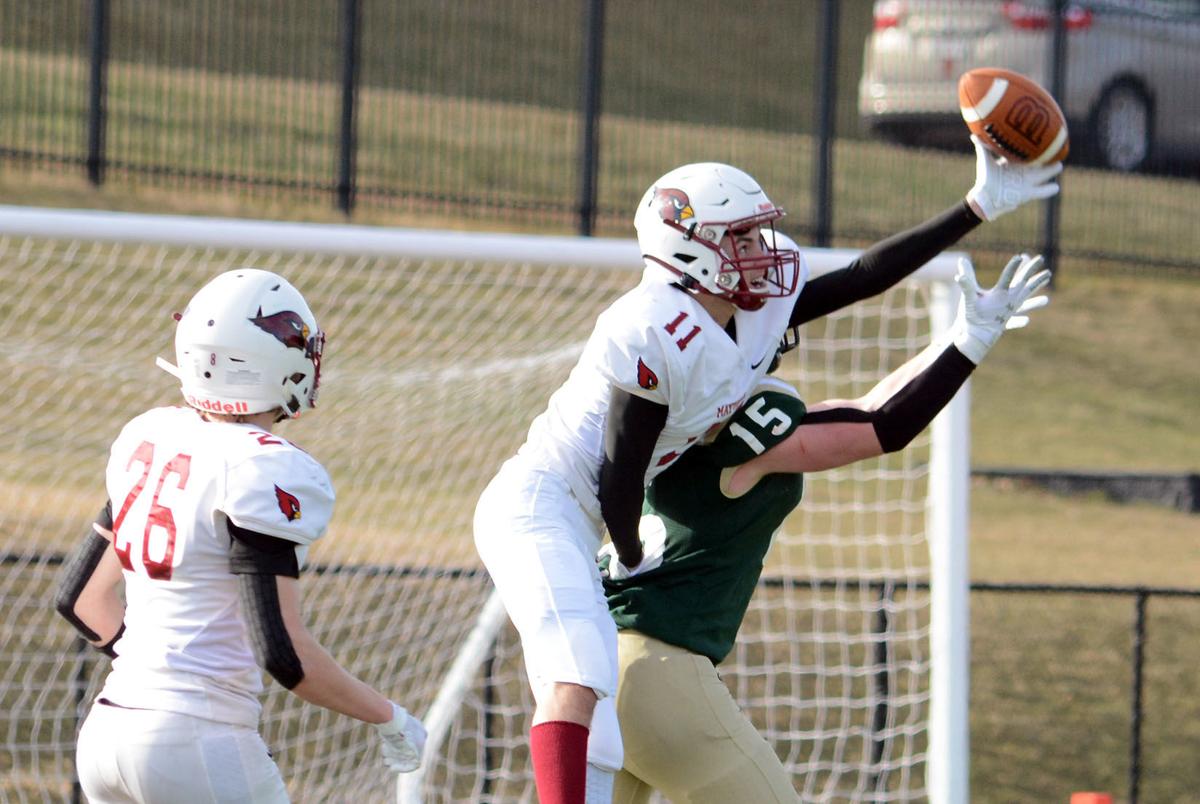 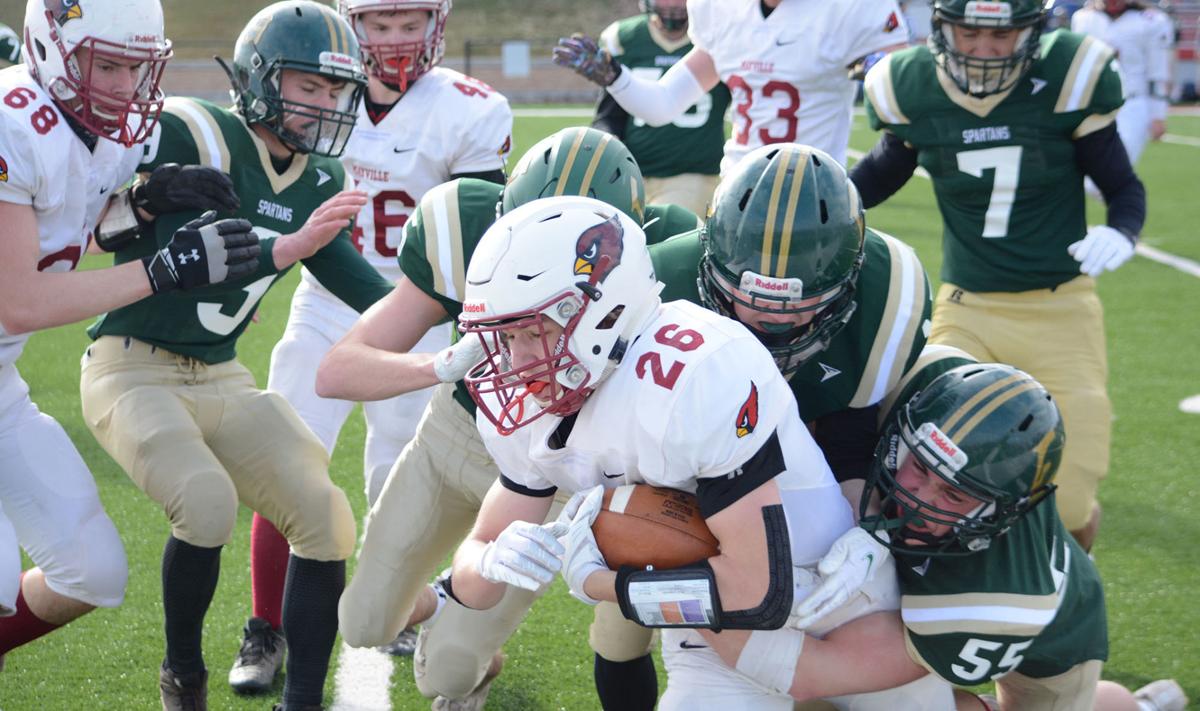 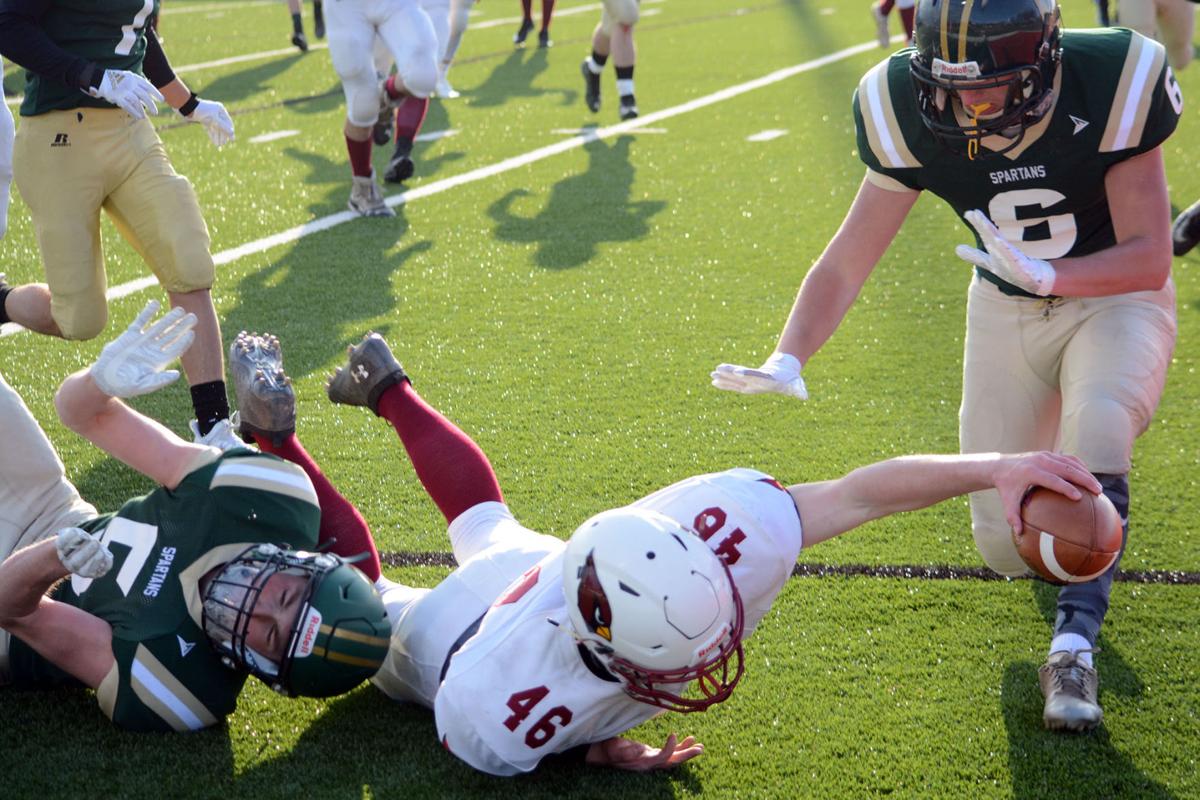 Mayville's Nathan Jensen (46) reaches out to the Laconia 1-yard line during the third quarter of Friday's Flyway Conference game against Laconia at Lomira High School.

LOMIRA — Spring is in the air and you never know what the weather may be.

Friday morning, it was wet and cold with freezing rain and a little bit of flurries. By the afternoon it was still a little cold, but the clouds cleared up some and a beam of sunlight showed through.

Regardless, it was the perfect setting for the Mayville prep football team to return to the gridiron for the first time in over a year-and-a-half. Whatever the condition, everything seem to run smoothly for the Cardinals as they dodged, dipped and weaved their way to 395 rushing yards and a decisive 27-0 shutout over Laconia in a Flyway Conference season opener at Lomira High School.

“I thought everyone did really good. Everyone was really good on their assignments,” Mayville coach Scott Hilber said. “They were executing it with some tenacity. That’s what we were looking for. We were rolling pretty good. … I’m really proud of the kids.

“Lucky for us, we have some motivated, smart kids. They’re on their assignments. They did it with incredible energy. They had fun together.”

The Cardinals (1-0, 1-0 Flyway) had fun on both sides of the ball, in particular the offense. Mayville’s Wing-T attack was too much to handle as the four-headed monster of running backs Blake Schraufnagel, Nathan Jensen and Andrew Thom, and quarterback Zach Weiss carved up the Spartans (0-1, 0-1).

“The Wing-T is designed to have a true four-headed monster,” Hilber said. “I thought our guys did a great job of coming out and executing that game plan. Everything starts with the line. A lot of those guys on the offensive line really took it to the teeth a year ago. They were kids playing a big boy game and now they’re big boys. They grew up a lot and they showed a lot today.”

The running outburst was stark compared to 2019 when Mayville’s offense ran for just 876 yards and nine touchdowns. With some experience under their belt, coupled with some confidence, the Cardinals amassed about a third of that production in just one game.

“We wanted to showcase what we got, so we got to keep working and keep getting better every day,” said Schraufnagel, who led the Cardinals with 117 rushing yards and a pair of rushing touchdowns.

“A lot of our offense is one-cut and you’re gone,” he added. “That’s with quick movements. The thing on the scout team, we played great on scout (during the week). We were able to mimic the game-style play. We were able to get moving.”

Schraufnagel’s first score came when he found daylight to the right side and darted in for a 23-yard touchdown with 4 minutes, 37 seconds left in the first half, to go up 13-0 with the point after.

Weiss got the Cardinals on the board first with a 12-yard dash up the middle to go up 6-0 after the missed extra point by kicker Aaron Anderson just 1:34 into the game.

Weis ran for 84 yards and the touchdown, while also completing four of seven passes for 40 yards.

The 13-point lead held until halftime and Schraugnagel wasted little time adding to the advantage. He found pay dirt for the second time with 8:22 left in the third quarter, plowing in from a yard out to go up 20-0.

The final score of the day came from Thom on 1-yard sneak with 7:47 left in the game. He set himself up for success with 14-yard scamper and nearly scored despite being stopped at the 3-yard line but his reach for the goalline wound up a yard shy.

It didn’t matter as he got over on the ensuing play for a 27-0 lead. Thom finished the day with 37 yards and a touchdown while Jensen led the ground-heavy attack with 91 yards.

Hilber was giddy about the offensive production by the Cardinals.

“I’m not disappointed,” he said. “It’s unfortunate we left some things on the field even today. We want to clean that up, but it’s all about the effort. The effort, the attitude and the execution, those three things I couldn’t be any more proud of than I am of the kids. They brought those three elements to the field today.”

Schraufnagel said Mayville’s success on offense came off the stout effort on defense the Cardinals showed all game long.

“It was huge. The big thing was we wanted to stop them,” he said. “If stopped them, then we get momentum on offense. We wore them down with our offense and our defensive work was much easier.”

Mayville held the Spartans to just 67 yards rushing and didn’t allow them to complete a pass all game long. Quarterback Eli Leonard led the way with 33 rushing yards and Cody Leonard had 31 on the ground.

“We were planning on relying on our defense a little bit this year while our offense caught up,” Hilber said. “Our offense is probably a little bit ahead of schedule than we even thought. The defense is right on par with where they are. We’re trying to figure out some pieces. We’re trying to get as many people on the field as we can. We found out some things on a few of the guys and that’s a pleasant surprise.”

And the Cardinals recorded their first victory since a 31-7 Flyway Conference shellacking of North Fond du Lac on Sept. 13, 2019.

“It’s a little different. The practice field is a little wet all the time,” Schraufnagel said. “Obviously, we’re not at our home field, we’re on turf.

“Once we get in the game, you can’t even tell. It’s back to normal.”

MAYVILLE — Baptism by fire was the prevailing theme for Mayville’s prep football team during the 2019 season, having seen 10 all-conference pl…

Social distancing guidelines, among all the other abnormalities over the last six months, certainly didn’t make things easy on prep football p…

The Hilber name is a familiar one around Mayville. From 1985 to 2001 Alex Hilber built the Cardinals into a football power, winning 12 confere…

DEFOREST — Of course the nerves were going to be there.

Mayville's Nathan Jensen (46) reaches out to the Laconia 1-yard line during the third quarter of Friday's Flyway Conference game against Laconia at Lomira High School.