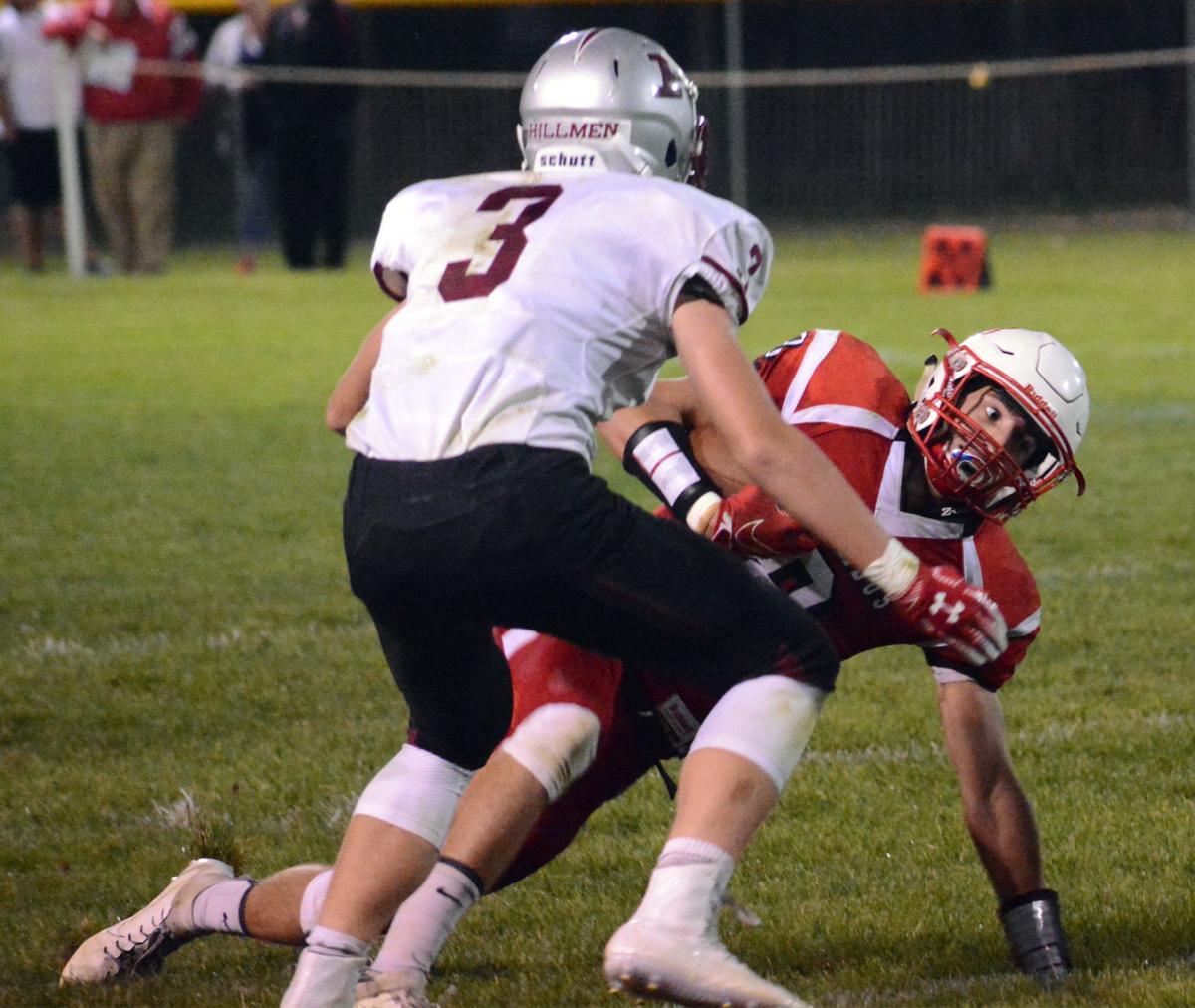 Columbus' Teagan Herschleb finished last week's game against Platteville with two interceptions, helping the Cardinals earn their second win of the season. The interceptions resulted in Caden Brunell touchdown runs of 71 yards and 39 yards in the second half. 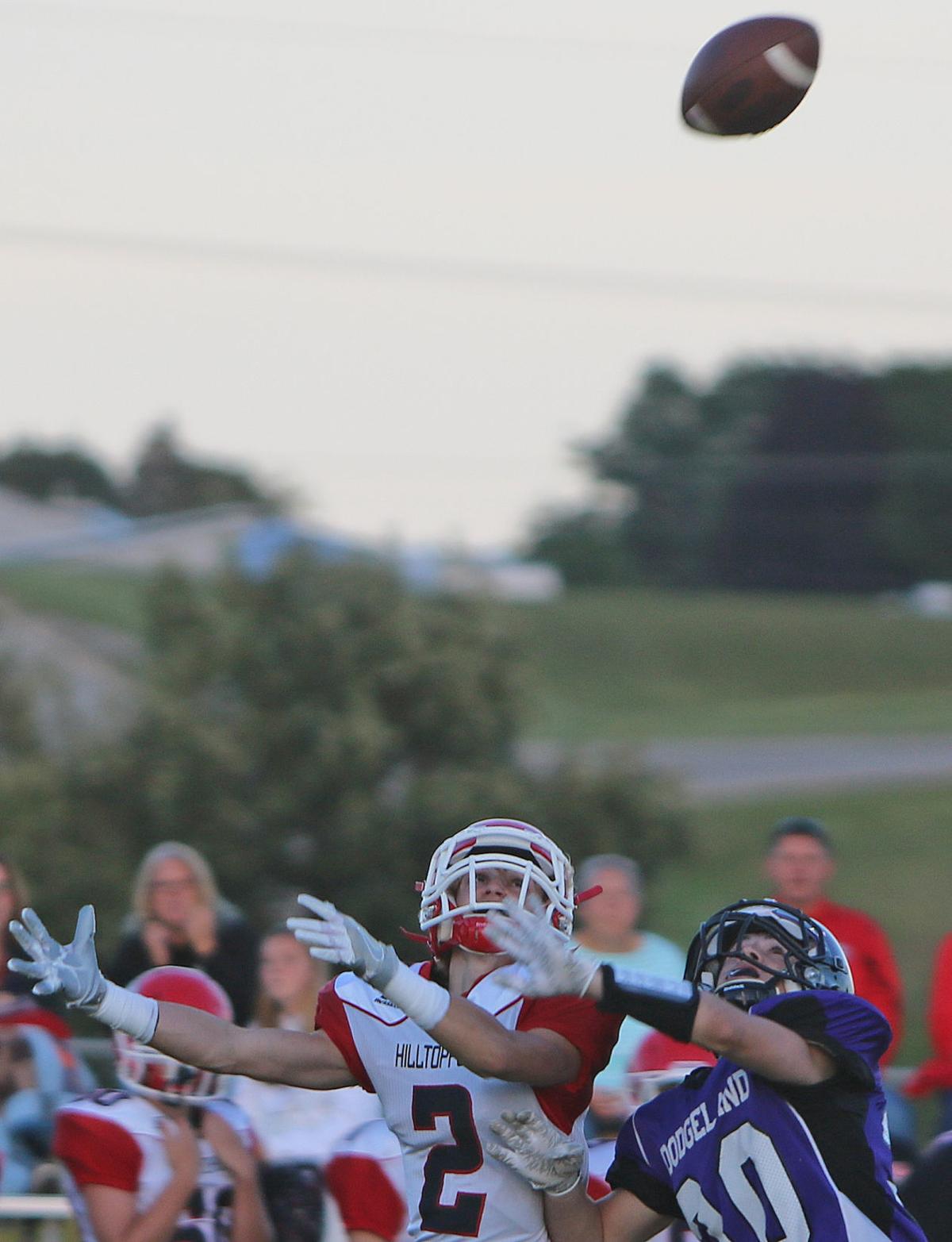 Dodgeland's Seth Christopherson (right) defends Cambria-Friesland's Cade Burmania on a deep pass that fell incomplete during the first quarter of the Hilltoppers' 34-27 Week 2 win over the Trojans at Dodgeland High School in Juneau. 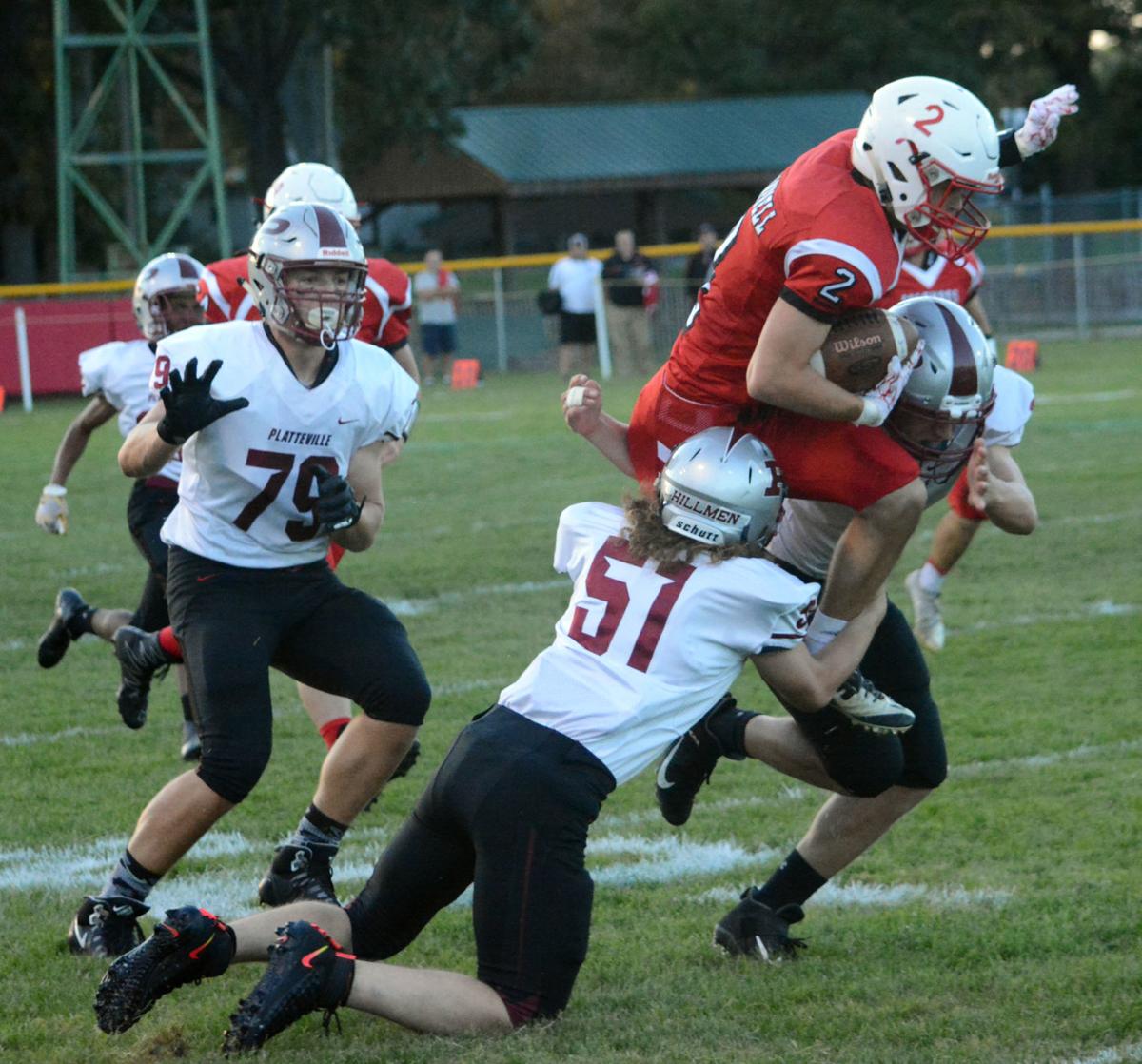 Columbus' Alex Campbell returns a kickoff to start the second half against Platteville last week. 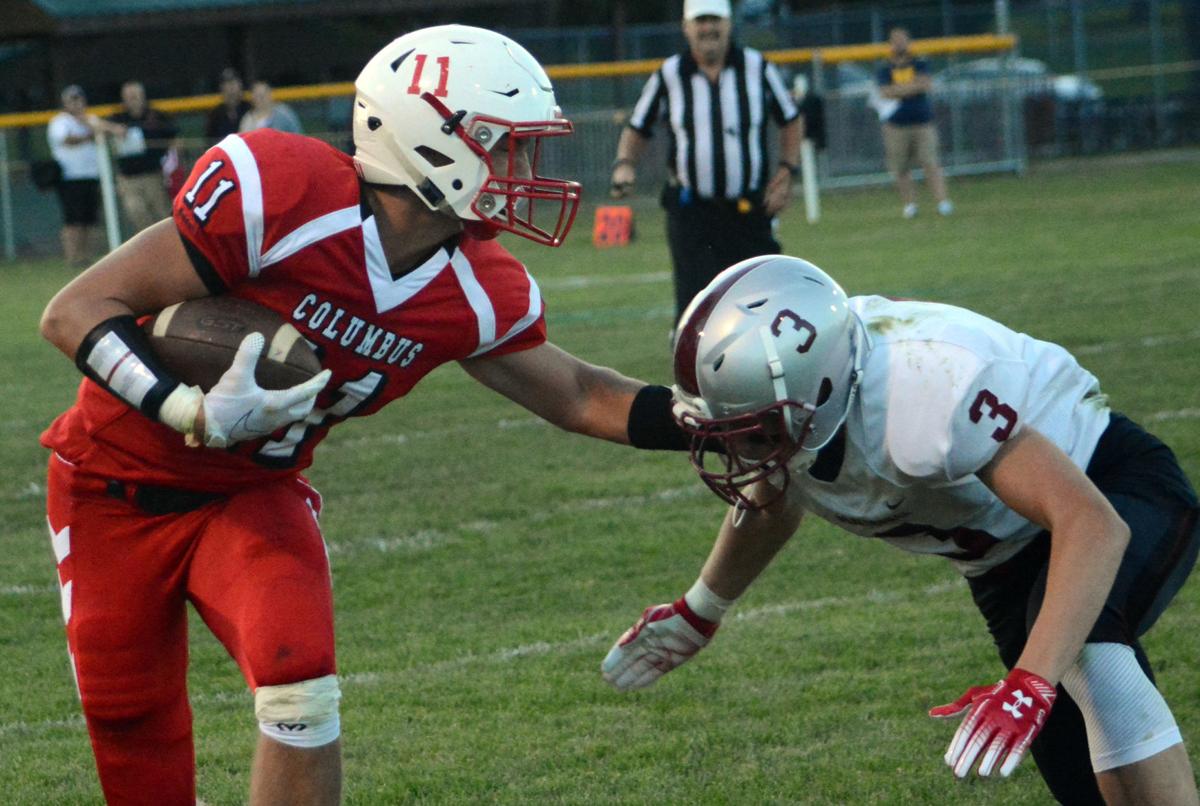 1 Game of the week

Week 3’s top game is taking place in Randolph, where the Rockets take on Kenosha Christian Life. On paper, these two teams are evenly matched, although the Eagles have thrown for more yards (120-79) and rushed for more yards (480-402). However, the Eagles have outscored the Rockets by 10 points (31-21) in the first two weeks of the season. If the Rockets want to continue their winning ways, the defense needs to focus on facing running back Jacob Shaffer, who leads the Eagles with 365 rushing yards and three touchdowns. Randolph’s defense has held opponents to just 180 yards and a single touchdown, so it looks Randolph will be capable of handling the pressure. On offense, the one thing Randolph coach Tom Chase has going for him is there are a plethora of weapons at his disposal. Brayden Haffele is a dual threat under center who has thrown for 79 yards and ran for a team-high 107 yards with a combined four touchdowns (three rushing, one passing), but he has thrown one interception and fumbled twice. The Eagles will also have to worry about Jordan Tietz (66 yards), Matt Dykstra (62 yards, one touchdown), Jax Rataczak (57 yards), Zach Paul (49 yards) and Logan Vander Galien (45 yards) on the ground as well.

Running back Caden Brunell is a two-way starter for Columbus, and Cardinals coach Calvin Zenz said last week that if Brunell keeps producing as he has early on, then Columbus should be OK. In the first two weeks of the season, Brunell has darted for 393 yards and five of the team’s six rushing touchdowns. He also snagged a 7-yard touchdown catch in last week’s game against Platteville. The Cardinals are undefeated in the first two weeks and it’s because Brunell’s scored three times in both victories. On defense, has multiple sacks, including one in which he forced a fumble that Austin Rennhack returned 55 yards for the first touchdown of the game against the Hillmen last week.

Cambria-Friesland survived mayhem in a 34-27 win over Dodgeland last week. The Toppers had a few bounces go their way and their rushing attack was solid. Max Raymond found his way for 181 of the team’s 264 total rushing yards, and scored two touchdowns. The Hilltoppers’ Carter Smits returned an interception for a 55-yard touchdown to end the first quarter. Then in the second half, Cade Burmania had an 88-yard kickoff return for a score and added an 11-yard touchdown run. All that spells trouble for a winless Wild Rose team that has mustered just 81 passing yards and 72 rushing yards in the first two weeks of the season. The Wildcats’ only touchdown on the season was an 8-yard pass in the fourth quarter of a 48-8 Week 1 loss to Necedah.

Last week didn’t go Dodgeland’s way against the Hilltoppers. Try as he might, Nate Oestreich couldn’t do it by himself. He rushed for 142 yards and two touchdowns, but the Trojans gave up three rushing touchdowns, an interception for a touchdown and a kickoff return touchdown. Brent Gehrke and Seth Christopherson had a rushing and a receiving touchdown, but Dodgeland couldn’t catch up with the Hilltoppers in the fourth quarter. The Trojans are foaming at the mouth to take out their pent-up aggression out against Trailways Large Conference foe Palmyra-Eagle this week. The Panthers are strong running and throwing, but the Trojans will have to zone in on the passing game. The Panthers have thrown for 432 yards and four touchdowns, all from quarterback Brandon Wilde, who has completed 41 of his 78 pass attempts (52.6%). The Trojans have given up just 122 yards and no touchdowns through the air, but through the first two weeks have only faced teams with dominant running attacks.

Markesan has a stingy defense that has only allowed three touchdowns, 228 passing yards and 205 rushing yards through the first two weeks, but has come out with a 1-1 record because the offense has struggled to get going early on. Hosting Montello/Princeton/Green Lake this week, the defense will face a one-dimensional offense that has rushed for an astounding 720 yards and seven touchdowns, and 130 yards and three more touchdowns in the air. M/P/GL is averaging 36 points a game and the Hornets are holding teams to just 11 points a game. In order to keep up with M/P/GL, quarterback Hayden Quade, who has thrown for 208 yards and one touchdown and ran for a team-high 88 yards, will have to step up his game along with the Hornets’ overall ground game. Markesan has rushed for 175 yards and three touchdowns.

The Golden Beavers are still looking for that first win of the season, but getting it against the almighty Warriors is going to be a tall task.

On paper, the Hilltoppers could overpower the Wildcats to get their second victory of the season. The Toppers are coming off an insane victory over Dodgeland that saw a lot of things happen, and they hope to continue that high against the Wildcats.

The Cardinals want to keep their winning streak alive against the Glarner Knights. If running back Caden Brunell can keep up what he’s been doing to start the season, it might just happen.

The Panthers are undefeated, but the Trojans are still feeling confident about themselves coming off a blow from the Hilltoppers last week. Look for running back Nate Oestreich to pound away at the Panthers defense.

The Red Knights have been one of the top rivals for Fall River over the last few years with the winner being in contention for the Trailways Small Conference crown. That should continue with the new Rebels co-op this season.

Husticon’s rushing attack and defense stepped up against Mayville last week. Coach Shannon Mueller hopes the MarshFalcons continue that against the Pirates.

The Hornets have a tall task of preparing for running backs Abe Postler (227 rushing yards, 4 touchdowns), Nate Postler (223, 2) and BJ Konkel (128, 1) who have combined for 578 yards and seven touchdowns.

The Cardinals offense couldn’t muster much of an offensive attack other than a deep touchdown pass in the first half against Husticon last week. Coach Tom Noennig hopes that changes against a winless Foxes team.

The Rockets look to keep up their winning ways when they host fellow undefeated Eagles.

The Warriors still look for their first win of the season against the Indians.

* All games start at 7 p.m. unless otherwise noted

For more photos from last week's action, go to wiscnews.com/bdc.

COLUMBUS — It’s been 10 years since Columbus coach Calvin Zenz has had a defensive lineman score a touchdown.

JUNEAU — A long drive. Two long kickoff returns. A botched snap on a punt that fortuitously turned into a critical first down on a touchdown d…

Columbus' Teagan Herschleb finished last week's game against Platteville with two interceptions, helping the Cardinals earn their second win of the season. The interceptions resulted in Caden Brunell touchdown runs of 71 yards and 39 yards in the second half.

Dodgeland's Seth Christopherson (right) defends Cambria-Friesland's Cade Burmania on a deep pass that fell incomplete during the first quarter of the Hilltoppers' 34-27 Week 2 win over the Trojans at Dodgeland High School in Juneau.

Columbus' Alex Campbell returns a kickoff to start the second half against Platteville last week.