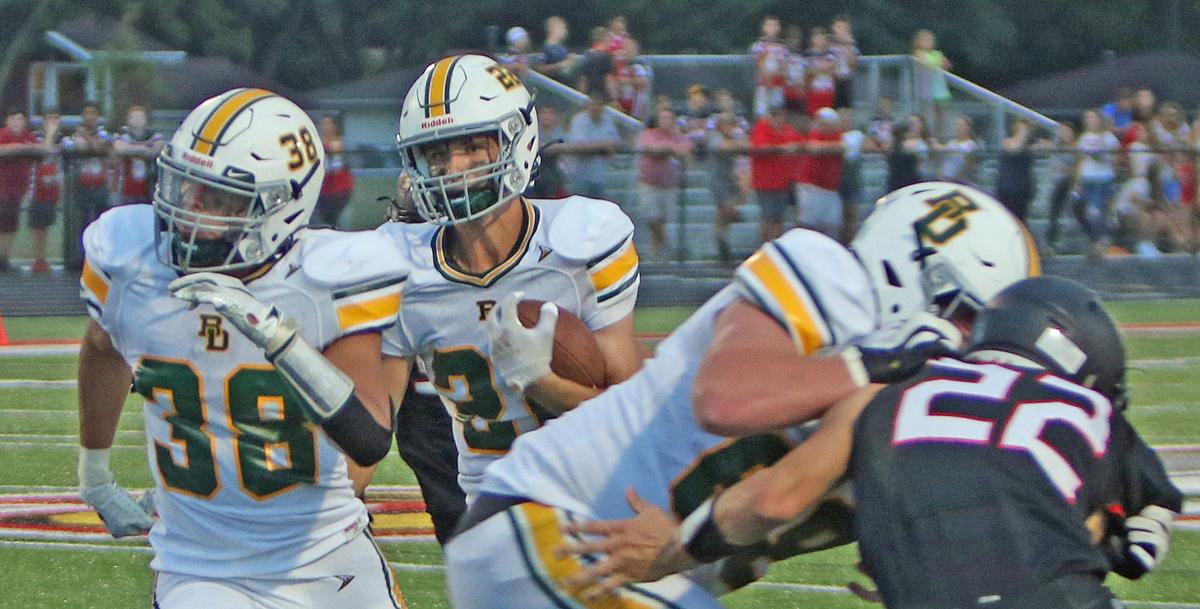 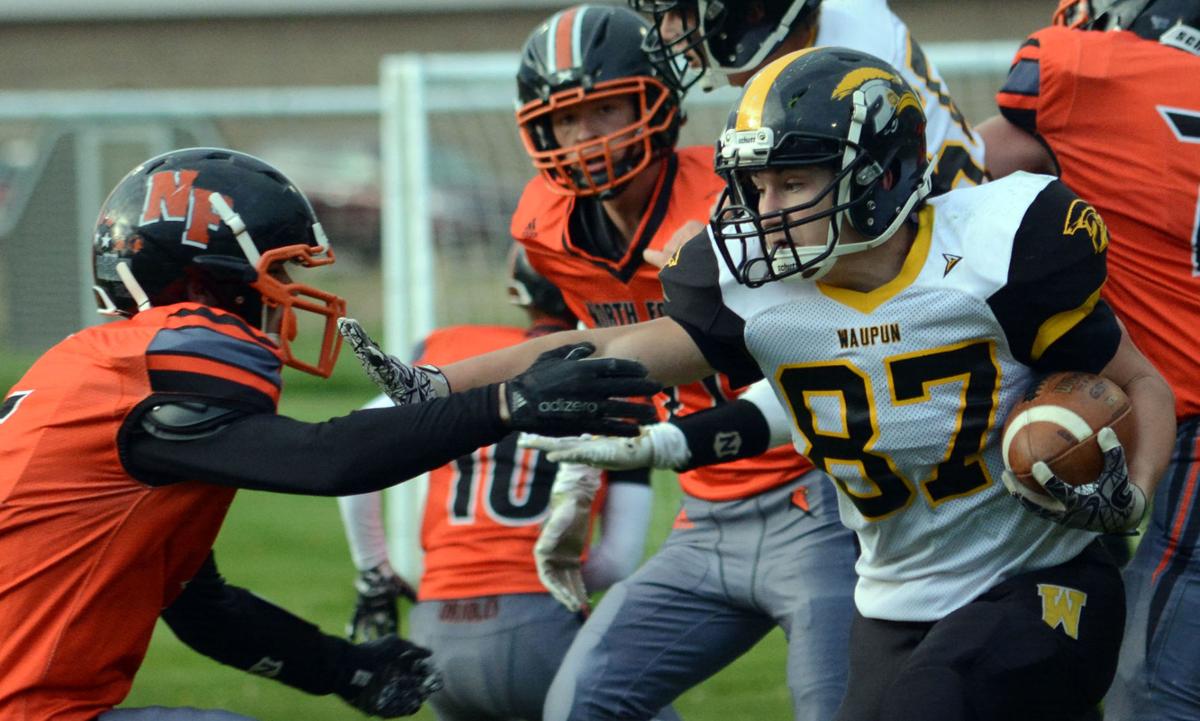 Entering the season, coach Brock Linde turned the focus of the Beaver Dam prep football team to its rushing attack.

The Golden Beavers haven’t diverted from that recipe for success, and it’s certainly worked so far.

Beaver Dam has piled up 533 yards and seven touchdowns on the ground so far this season, with over half of it coming last Friday in a 35-8 non-conference romp over Sauk Prairie. The Golden Beavers piled up 360 yards and all five scores on the ground on 36 carries, good for 10 yards per attempt.

While the duo of sophomore Gabe Klatt (192 yards, 2 touchdowns) and senior Alex Soto (79, 2) led the way, Beaver Dam has some very capable depth on its hands. Freshman quarterback Camron Mendoza added 64 yards and a score on 13 carries, while freshman Bradyn Strachota took his lone handoff of the night 17 yards.

As impressive as the run game was, Beaver Dam’s defensive effort wasn’t overshadowed.

The Golden Beavers held the Eagles to just 165 total yards, including 37 yards on the ground, thanks in large part to their two-headed monster of seniors Jaden Barstow and Connor Strasser. Barstow tallied a team-high 16 tackles, including five solo, while Strasser added 15 tackles of his own (four solo).

Beaver Dam’s depth showed on the defensive side of the ball, with seniors Evan Sharkey and Truman Leisses each adding eight tackles, while three other Golden Beavers had at least five takedowns.

The rushing attack was again the star for the Warriors, who rushed for 258 yards and all three of their touchdowns on 48 carries. The duo of Lucas Meyer (118 yards) and Ashton Campbell (104 yards, 2 TDs) paved the way as Waupun doubled up the Eagles on the ground.

The one area the Warriors have been susceptible in this season has been through the air. Waupun gave up 211 passing yards against Menominee Indian, with receiver Andre Corn hauling in six catches for 170 yards and a score.

Meanwhile, Warriors quarterback Easton Hull was picked off twice while throwing for 32 yards on 3-of-10 passing in the win. The Warriors have just 67 passing yards through two games, and Waupun has yet to score through the air this season.

Columbus picked up right where it left off this fall, cruising to a 42-6 win over Platteville last Friday.

The Cardinals wasted little time getting on the scoreboard, using a three-score first quarter to motor into halftime up 27-0. In fact, Columbus scored all four of its first-half touchdowns in the game’s opening 13 minutes, with a 56-yard pitch-and-catch from Nate Cotter to Brady Link a minute into the second quarter giving the Cardinals a hefty lead.

It’s continued the trend of fast starts for Columbus, which also seized a 14-0 lead en route to a 34-0 win over Omro in Week 1.

The Cardinals’ defense has also shined, allowing just 283 total yards so far this season, including 145 against the Hillmen. And barring Platteville’s lone score with two seconds remaining last week, Columbus would be riding consecutive shutouts.

Mayville left no doubt in its Dodge County rivalry tilt with Horicon/Hustisford, rolling to a 42-0 win over the MarshFalcons.

Helping put the throttle down for the Cardinals was, unsurprisingly, junior running back Blake Schraufnagel. The bruising 6-foot, 170-pounder piled up just under 200 yards, rushing for 198 and five of the Cards’ six scores on 19 carries, good for an eye-popping 10.4 yards per attempt.

It’s no shock after Schraufnagel torched opponents for 689 yards and nine scores this past spring, and probably the start of big things to come. Meanwhile, the MarshFalcons were stuck in first gear on the ground as they had minus-6 yards on just 11 carries.

Only AJ Bushke and Carter Schwartz had positive yards for Horicon/Hustisford. The good news for the MarshFalcons was that their passing game found some success. Carter Schwartz threw for 134 yards on 7-of-17 passing, albeit with two interceptions, and connected with Nathan Spoerl twice for 88 yards.

After a season-opening rout over Rosholt, Randolph failed to blast off in a 42-6 loss to Hilbert in Week 2.

The Rockets mustered just 58 yards on the ground on 30 carries, mustering just 1.9 yards per attempt. But what really hurt Randolph was the Wolves’ ability to speed away for big gains.

Fall River/Rio battled to the end of Friday’s non-conference tilt against Royall, but a late Royall score spelled doom for the Rebels in a 6-0 loss in their home opener.

Still, there were some positives in the defeat, namely that Fall River/Rio rushed for 137 yards on 28 carries (4.9 yards per attempt), led by senior Gavin Grams and junior Matthew Miller. Grams rushed for a team-high 67 yards, while Miller added 53 on just seven carries (7.6 per attempt).

Meanwhile, Miller threw for 65 yards on 6-of-11 passes with an interception. Despite dropping to 0-2 and being shut out, it’s a step in the right direction for Fall River/Rio.

Markesan found enough success offensively to pull away from Laconia last week, as it rushed for just over 200 yards to top the Spartans, 14-8.

But while the Hornets narrowly outgained the Spartans (202-191), the biggest part of the game that swung momentum Markesan’s way was in the turnover battle. While Ryan Mast threw one interception on his lone attempt of the night, Markesan’s defense forced three fumbles.

Caleb Stoll meanwhile had 17 tackles, including seven solo, while Tyler Mast had 15 takedowns (five solo) and a sack. Gavin Campbell added a dozen tackles, as well as a forced fumble, and eight other Hornets had at least five tackles.

The Chiefs held the Tigers scoreless for 35-plus minutes following a 27-point first quarter to help notch the program's first 2-0 start since 2013.