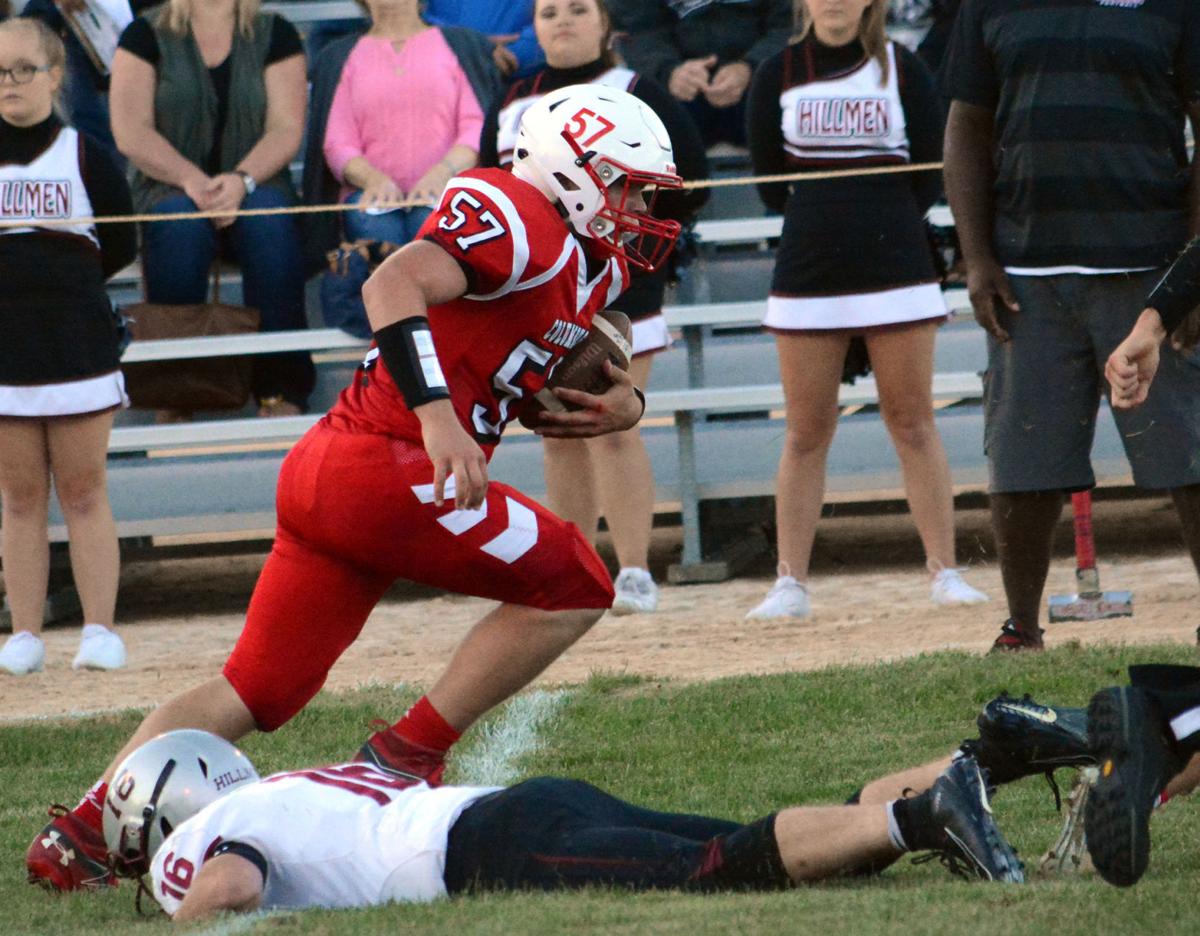 Columbus' Austin Rennhack recovers a fumble by Platteville quarterback Tyler McClain and returns it 55 yards for a touchdown early in the first quarter of a non-conference game last season. Rennhack returns after being named the Defensive Lineman of the Year in the Capitol North Conference last season. 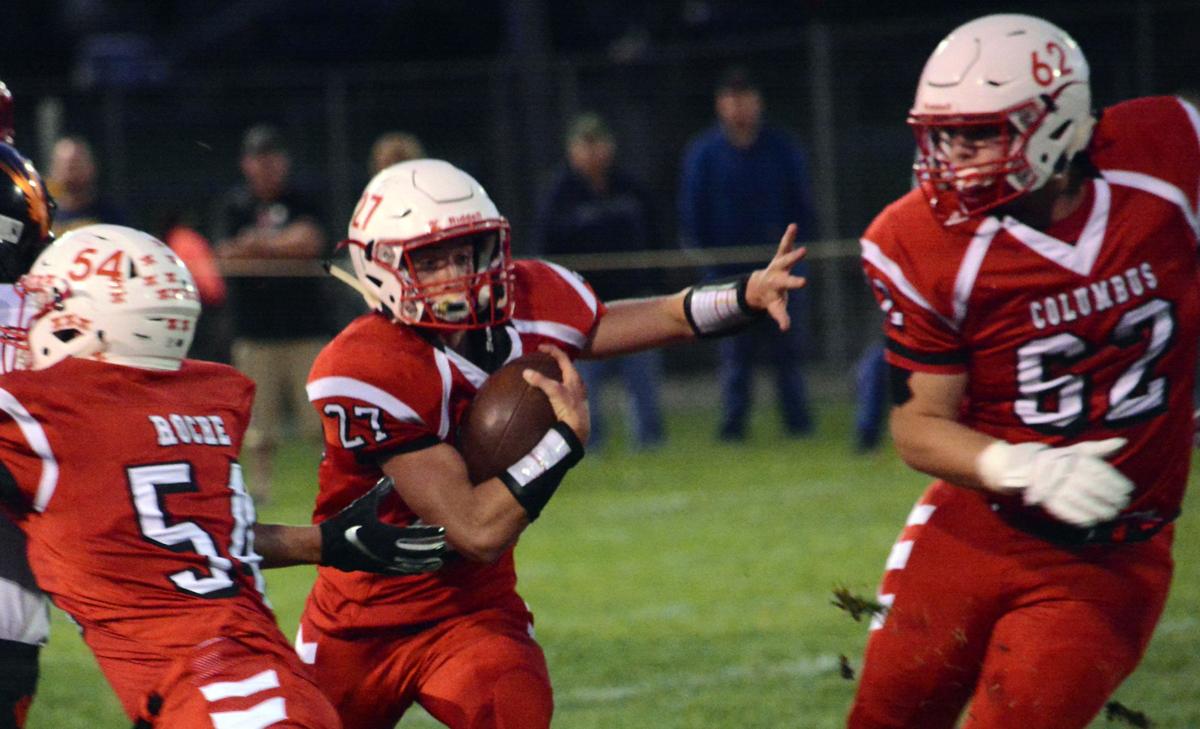 Columbus running back Caden Brunell, middle, rushes between the tackles during a game last season. Brunell returns this season as the Cardinals' starting running back and middle linebacker.

Columbus coach Calvin Zenz had a lot to be excited about heading into the fall football season. Unfortunately for the Zenz and the Cardinals that excitement will have to wait, as concerns over the COVID-19 pandemic have forced the high school to move its football season to the spring.

The Cardinals had a lot of talent returning from a 2019 squad that went 6-3 overall and finished second in the Capitol North Conference at 3-2. It was the best season in Zenz’s three years in charge of the Cardinals, who made the playoffs for the first time since 2016.

“It hurts for me, and the time I’ve put in for the program,” Zenz said of the decision to move the season to the spring. “For the kids, especially, yeah it hurts. I’m not going to lie, it’s unfortunate. We’re the eighth ranked team in D5 in preseason. That means a lot. A couple years ago we won one game, so for these guys to have a group that can make a run in the playoffs, to compete for a conference championship and for them to not have that opportunity and even given a chance to do it, yeah there are a lot of different feelings, and heartbreak would definitely be one of them.”

“We don’t push the individual stuff, but these kids work really hard and deserve recognition for it,” Zenz said. “All of these guys would give up the awards just to play this fall. But it is really disheartening. You look at kids like Caden (Brunell) and Austin (Rennhack) -- these guys had chances to be three-time all-conference, defensive or offensive players of the year, it’s just a lot of accolades that they should be capable of receiving, yet they’re not. Then you throw in all-state. There’s a lot of opportunities these guys are losing.”

Brunell and Rennhack are two players Zenz was excited to see return this season. Both are returning seniors that now have to wait until the spring to lead both sides of the ball.

Brunell -- a 5-foot-9, 169 pound bowling ball of a running back -- ran for 1,150 yards and 14 touchdowns to earn first-team league-honors last year. Brunell will be joined in the backfield by senior Will Cotter, who will be in his third year as the Cardinals’ signal caller. He completed 51.4% (94-183) of his passes for 1,186 yards and 10 touchdowns last year, and ran for 251 yards and five touchdowns.

“Last year we completely switched our offense. They were just getting their feet wet,” Zenz said. “I think it was the last game of the year, Caden came up to me and said, ‘I finally figured out how to run inside zone.’ And I’m like, ‘Good!’ He did and he ran it really well. Will, at the end, was really getting his (run-pass options) down, so building on that I was really excited, and I still am, to see what they put on the field.

"They put in a lot of work and a lot of time. If you thought they looked good last year, Will’s an even better passer than he was last year and he threw for over 1,000 yards. And Caden’s super quick right now. It’s pretty crazy watching him run around right now.”

Rennhack, a first team all conference offensive and defensive lineman, will lead the offensive line in front of Cotter and Brunell. Zenz said with the losses of Tayvon Hayes and James Roche due to graduation, he has a plethora of guys looking for playing time this season.

“You have Austin Rennhack and Ryan King, who are both all-conference, coming back,” Zenz said. “Luke Lobner started eight games last year on the o-line. Then Kyle Kilian is going to be a senior as well. Then the young guys: Caden Morschauser is like 6-4, 240 right now. Collin Selk is a sophomore and he’s about 6-3, 235 right now. Brady Engel is another sophomore and he’s my little guy at 6-2, 230 or 220 pounds. Those are probably the top guys we’re looking at.”

Zenz likes the idea that most of the offensive line will be big for Cotter and Brunell, besides Rennhack.

“I think our whole offensive line might go 6-2 and above, besides (Rennhack),” Zenz said. “He’s obviously the best lineman in the conference. There are some big boys for Caden to hide behind.”

Rennhack and Brunell will be leading the defense as well. Rennhack is the returning defensive lineman of the year for the Capitol North Conference and Brunell has a plethora of experience as the middle linebacker.

“He’s definitely our best lineman,” Zenz said. “We usually rotate our defensive line because they’re often offensive linemen, but we’ve got a bunch of guys who can play. They just need to get out there.”

Zenz said Brunell will be the one running the defense in the wake of Teagan Herschleb graduating, but the one to replace four years of experience at the safety position is the athletic freak of nature named Trace Kirchberg.

"You talk about best athletes on the team, that dude (Kirchberg) is a specimen,” Zenz said. “I don’t know which one you would say is more athletic, him or Caden. It would be quite the competition. He’s a phenomenal athlete. He played outside linebacker for us last year. I expect him to take over that role.”

See you in the spring

Columbus has opted to not play football this fall due to concerns over COVID-19 and will instead try to play football in the spring.

FOOTBALL: Columbus excited about opportunity to play in Rock Valley Conference in spring

COLUMBUS ― The 2021 alternate prep football season will be a challenging one for Columbus.

Columbus' Austin Rennhack recovers a fumble by Platteville quarterback Tyler McClain and returns it 55 yards for a touchdown early in the first quarter of a non-conference game last season. Rennhack returns after being named the Defensive Lineman of the Year in the Capitol North Conference last season.

Columbus running back Caden Brunell, middle, rushes between the tackles during a game last season. Brunell returns this season as the Cardinals' starting running back and middle linebacker.