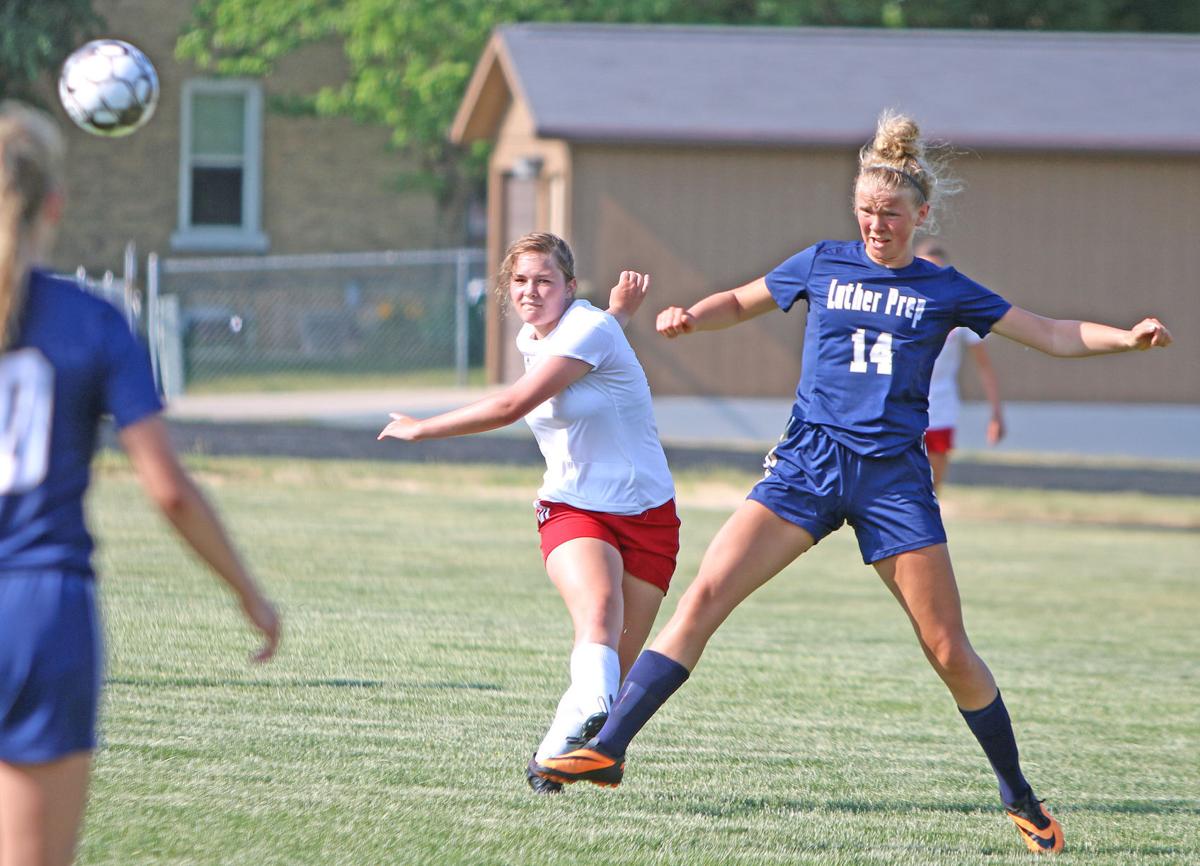 Watertown Luther Prep's Grace Kieselhorst (14) tries to interrupt a shot into the 18-yard box by Columbus' Cathy Roche during the first half of the Cardinals' 4-2 overtime loss to the Phoenix on Thursday afternoon in a Division 4 regional semifinal game at Luther Prep in Watertown. 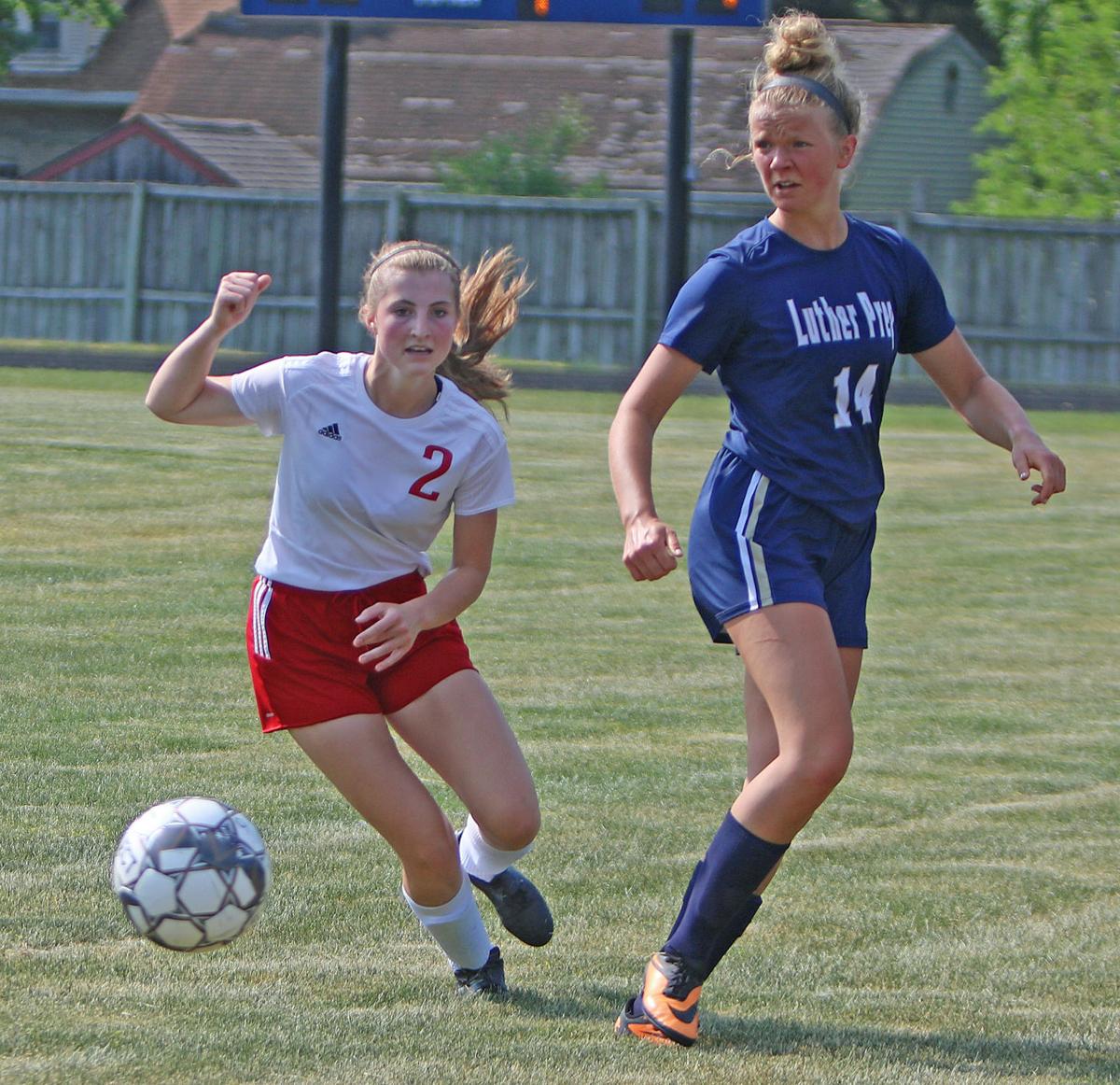 Columbus' Morgan Baerwolf (2) and Watertown Luther Prep's Grace Kieselhorst (14) try for possession of the ball during the first half of the Cardinals' 4-2 overtime loss to the Phoenix on Thursday afternoon in a Division 4 regional semifinal game at Luther Prep in Watertown.

But the Columbus prep girls soccer team was much better this season than its record shows, evident one last time on Thursday afternoon when the sixth-seeded Cardinals nearly pulled off an upset in the WIAA Division 4 regional semifinals.

The Cardinals got the equalizer in the 64th minute and attacked relentlessly over the final 20-plus minutes of regulation, they just couldn’t quite get the bounce they so desperately needed and suffered a 4-2, overtime loss to third-seeded Watertown Luther Prep.

“We were always playing with 11 on the field and then just a handful of subs,” Columbus coach Gerald Jacobson said of having just 15 girls on the roster this spring, sometimes less than that if players were missing.

“There was a game where we played Lodi, we had no subs in that game,” Jacobson added. “And in a couple of games we were out-shooting (our opponent) or out-possessing them, and that’s something these girls worked on this season, throughout the whole season.

“It’s lack of numbers, but they work so hard to keep us within a goal every game.”

In fact, three of the Cardinals (1-5-4) losses were by just one tally — and this one would have been too if not for Eliabeth Rutschow’s goal with 13 seconds remaining in overtime that pushed the score to 4-2.

Columbus was first on the board in the contest, with striker Ashley Olson capitalizing on a breakaway to make it 1-0 just 87 seconds in.

“She just found space and she was able to drive down and get a shot off,” Jacobson said. “It happened so fast, it surprised me.”

Luther Prep (7-4-3), which handed Columbus one of its closes losses in a 2-1 match back on May 18, answered in the 18th minute when Megan Taucheck found the net to knot the score at 1-all.

That’s the way it remained for the rest of the first half, but early on in the second half Taucheck gave the Phoenix a 2-1 lead when she scored to the top left corner of the net on a penalty kick in the 51st minute.

Again the Cardinals didn’t fold, tying things back up again when Reese Moorad found Olson — or the ball bound Olson, anyway — for an opportunity that resulted in a 2-2 score.

“It was a slightly deflected pass and it just fell right into Ashley’s path so that she could get a shot,” Jacboson said.

Both teams had good chances the rest of the way — Taucheck getting the best of them only to see her shot from just inside the 18-yard box go off the crossbar — but neither could capitalize and the contest went into overtime.

The first 5 minutes of the extra session were evenly played but in the 6th minute Taucheck missed a shot that caromed off the left upright but somehow stayed in play, finding its way to midfielder Grace Kieselhorst who then punched it in for a 3-2 lead.

“They have some really good wide players who push up, and they push up hard,” Jacobson said. “Our outside backs have struggled a little bit throughout the season having to deal with that — I think maybe our outside back didn’t even know (Kieselhorst) was there.”

The Cardinals’ chances did also take a blow late in the second half when Moorad, their talented sophomore striker, had to leave with an injury and thus wasn’t on the field for overtime.

But while Columbus’ season comes to a disappointing end, it does so with a lot of promise for the future.

Only Ashley Olson and Abbi Olson are seniors, meaning almost the entire roster will be back. And of the returnees for 2022, nine are either freshmen or sophomores.

It took them a bit to find their footing in 2021 having not had a 2020 season because of the COVID-19 pandemic. But once they did, they played well.

“We were very young, and it showed. If you would have seen our first couple games, our passes weren’t clean like you saw today,” Jacobson said. “They adjusted well. They listened to what I had to say and they had fun. That was the biggest thing is I wanted them to have fun, and they did.”

They also were good, even if that didn’t show in the win column.

“I think that shows the strength of conference, how competitive it is,” Jacobson said of the Capitol, which boasts the sixth-ranked team in Division 3 (Sugar River) and the eighth-ranked team in D4 (Lake Mills) according to the Wisconsin Soccer Coaches Association.

The Cardinals’ lone blowout loss was a 9-0 defeat to Sugar River in a non-conference match at the tournament Sugar River hosted on May 15, but in conference, they played the Raiders tough, losing only 1-0.

And the Cardinals played Lake Mills to a 3-3 draw in their regular season finale on June 3.

“Even though we’ve had a losing season,” Jacobson said, “we’re still very competitive.

“That’s where the girls learn is playing in those type of games — that’s how they get better.”

Senior Kailey Walters is a big part of the attack for the Beaver Dam prep girls soccer team.

Watertown Luther Prep's Grace Kieselhorst (14) tries to interrupt a shot into the 18-yard box by Columbus' Cathy Roche during the first half of the Cardinals' 4-2 overtime loss to the Phoenix on Thursday afternoon in a Division 4 regional semifinal game at Luther Prep in Watertown.

Columbus' Morgan Baerwolf (2) and Watertown Luther Prep's Grace Kieselhorst (14) try for possession of the ball during the first half of the Cardinals' 4-2 overtime loss to the Phoenix on Thursday afternoon in a Division 4 regional semifinal game at Luther Prep in Watertown.