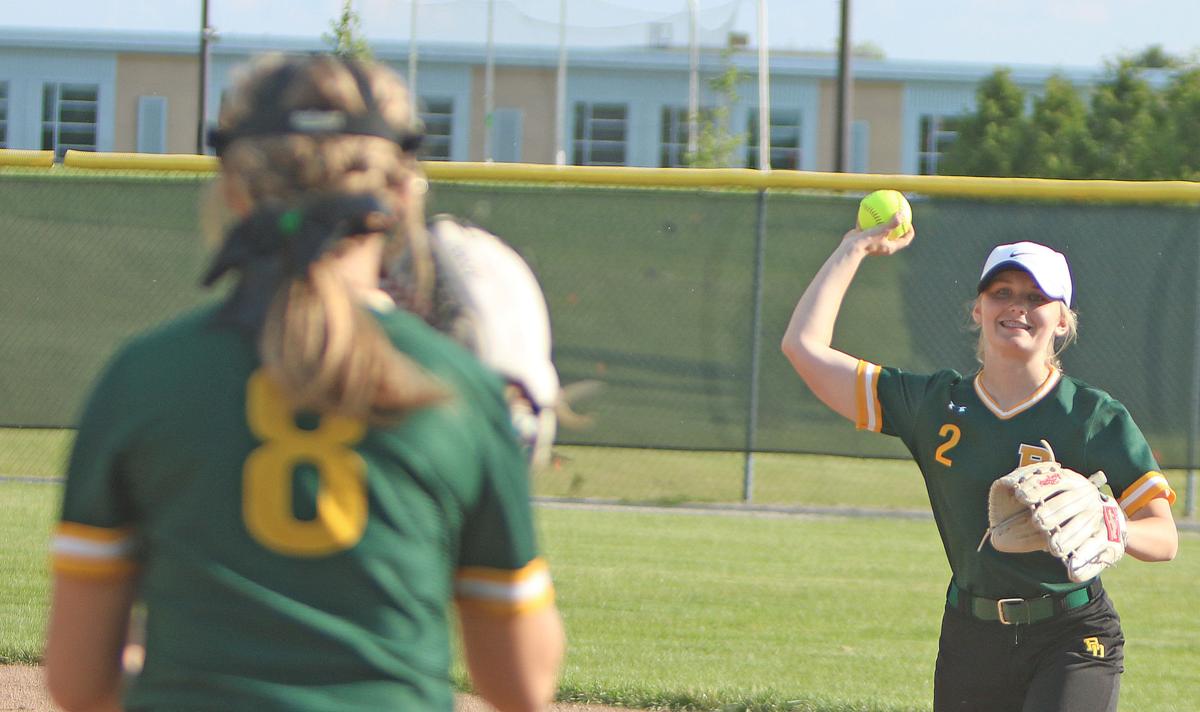 Beaver Dam second baseman Riley Schwartz (2) throws to first baseman Gabrielle Fakes for an out during the Golden Beavers' 2-1 loss to Baraboo on Tuesday afternoon at Beaver Dam High School. 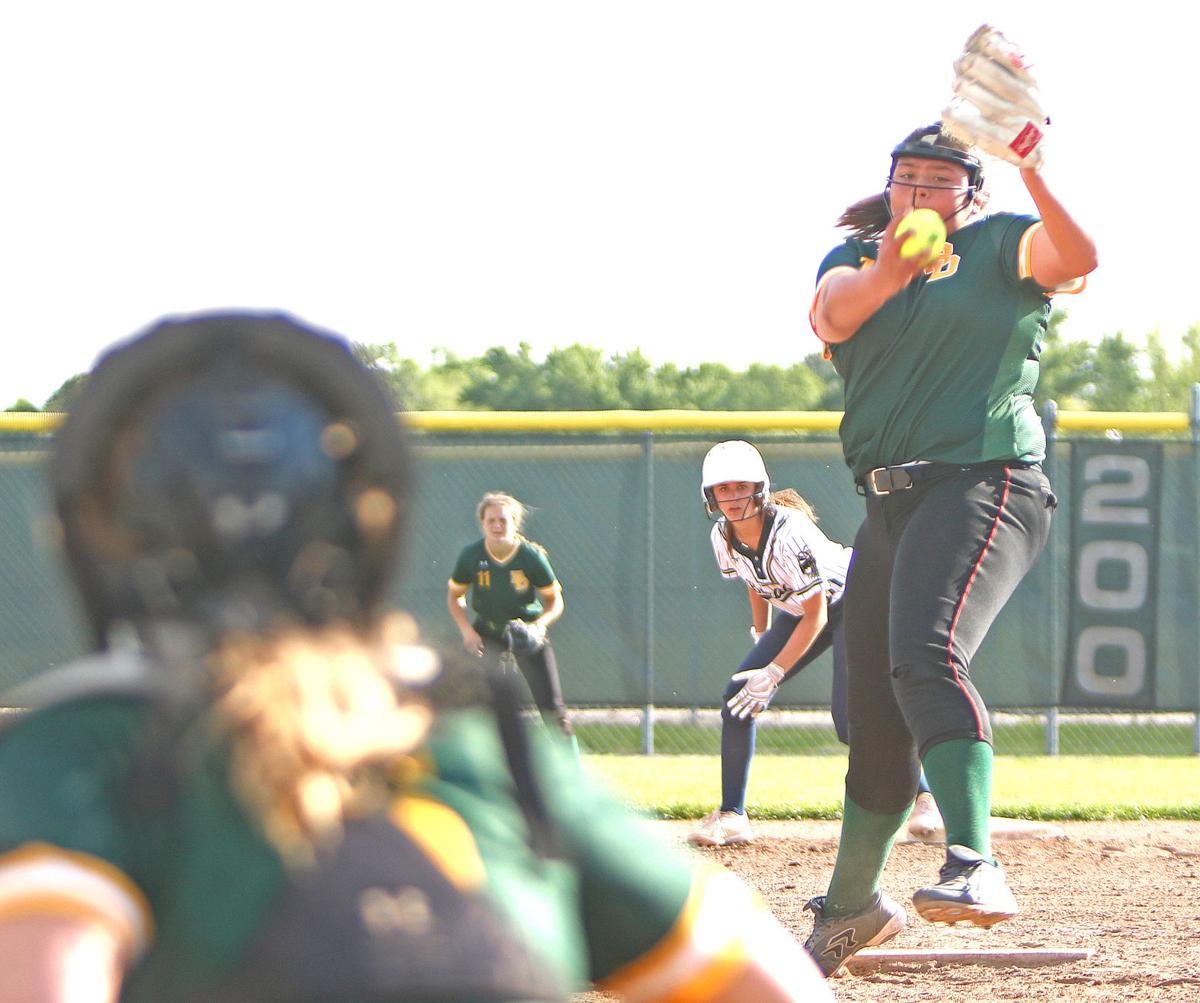 Getting runners on base wasn’t a problem for Beaver Dam’s prep softball team Tuesday afternoon against Baraboo.

Getting them in was.

And Emma Crary was a big reason why.

Time and time again the senior wiggled her way out of jams, none bigger than the last one, when she got a strikeout with the tying run on third and the winning run on second in the bottom of the seventh inning to give her Thunderbirds a 2-1, Badger North Conference victory over the league-leading Golden Beavers.

Ironically, it was a fastball in the upper part of the strike zone over the inside corner of the plate that got Beaver Dam’s Haley Allen swinging to end the game — because it had been Crary’s change-up that puzzled the Golden Beavers all game long.

“You don’t have to just throw hard to get people out, do you?” Baraboo coach Dan Lewison said. “We proved that tonight.”

But the Golden Beavers (12-2, 10-2) definitely put the pressure on, beginning right away in the first inning.

After Audriana Edwards and clean-up hitter Carlee Lapen drew back-to-back two-out walks, Ginny Bryant reached on an error to load the bases, putting Crary in her first pickle of the afternoon.

She would get out of it with a strikeout, however, and she wouldn’t get in trouble again until the third. In that frame, she got a fly out to strand runners at the corners.

Beaver Dam got the leadoff runner aboard in the fourth when Olivia DiStefano reached on a bunt single, and she would move into scoring position on a sacrifice bunt by Allen.

But once again the Golden Beavers couldn’t cash in, this time trying to erase a 2-0 lead after the T-Birds had scored a pair of unearned runs in the top half.

Bryant did cut the deficit in half in the fifth, driving in Gabrielle Fakes with an RBI fielder’s choice. But the Golden Beavers would end up stranding the tying run at third.

And in the sixth, they got a pair of runners aboard — both reaching on two-out errors — before again not coming up with a clutch hit.

The bottom of the seventh might have been the most frustrating of all, though.

In that frame, Edwards drew a leadoff walk before Lapen sent a deep fly ball to center that had extra bases written all over it only to have those words erased when Taylor Pfaff tracked it down and made a terrific catch for the first out.

DiStefano later reached on a two-out single before taking second base when pinch runner Makenna Fitzsimmons stole third, giving the Golden Beavers a prime opportunity for a walk-off victory.

But it wasn’t to be.

“That’s what’s been biting us all year — we haven’t been scoring our runners. And it really came back and got us today,” Golden Beavers coach Abby Schmitt said of the team’s one Kryptonite, which on Tuesday resulted in 12 runners left on base.

It was Crary’s change-up that puzzled them most.

“They were guessing on what the ball was going to do — rather than just seeing the ball and trusting their hands, they went after whatever they saw.”

It was an impressive final line that netted the T-Birds their fifth straight victory — but most importantly, their biggest victory of the season.

In the first meeting between the two the T-Birds suffered a 10-0 loss, and they were bound and determined not to let that happen again.

“They got a couple big hits in that game and blew it open, so we wanted to come out and see what we’re really made of,” Lewison said. “We were kind of wondering who we are and what we’re capable of, and I think tonight we showed that we’re capable of playing with the very best.”

Baraboo did so by enduring every bit of adversity thrown its way.

“In a game like this against their pitching — which is outstanding — we knew were going to have to try to keep it close and just hang in there,” Lewison said. “Emma Crary pitched an outstanding game and did that for us, and we took advantage of a couple of their mistakes, got the two runs, and we just kind of avoided damage.

“It was like going through a mine field at times out there tonight, and we managed to get through it.”

The Golden Beavers pitching and defense didn’t face the same kind of pressure, as Baraboo left only three runners on base.

But they couldn’t convert at the dish, which snapped their seven game winning streak and now leaves them no margin for error in the conference race.

If the Golden Beavers can win out, they’ll be assured of no worse than a share of the Badger North title.

And while Schmitt would have rather won on Tuesday, she knows that falling to Baraboo could end up paying dividends in the days and weeks to come.

“They deserved that win,” she said of the T-Birds. “We’re just going to come back working harder than ever to get our next few.

“If we’re going to lose, I’d rather it be now than at the end of the season. I think they feel what a loss is like again, and now we’re just going to come back ready and more willing than ever.”

Photos from a prep softball game between Baraboo and Beaver Dam on Tuesday, June 1, 2021, at Beaver Dam High School won by Baraboo, 2-1.

Kurtis Price singled home Quinn Baier in the bottom of the seventh inning to give the Sauk Prairie (7-10, 4-8) baseball team a 5-4 victory ove…

Beaver Dam second baseman Riley Schwartz (2) throws to first baseman Gabrielle Fakes for an out during the Golden Beavers' 2-1 loss to Baraboo on Tuesday afternoon at Beaver Dam High School.