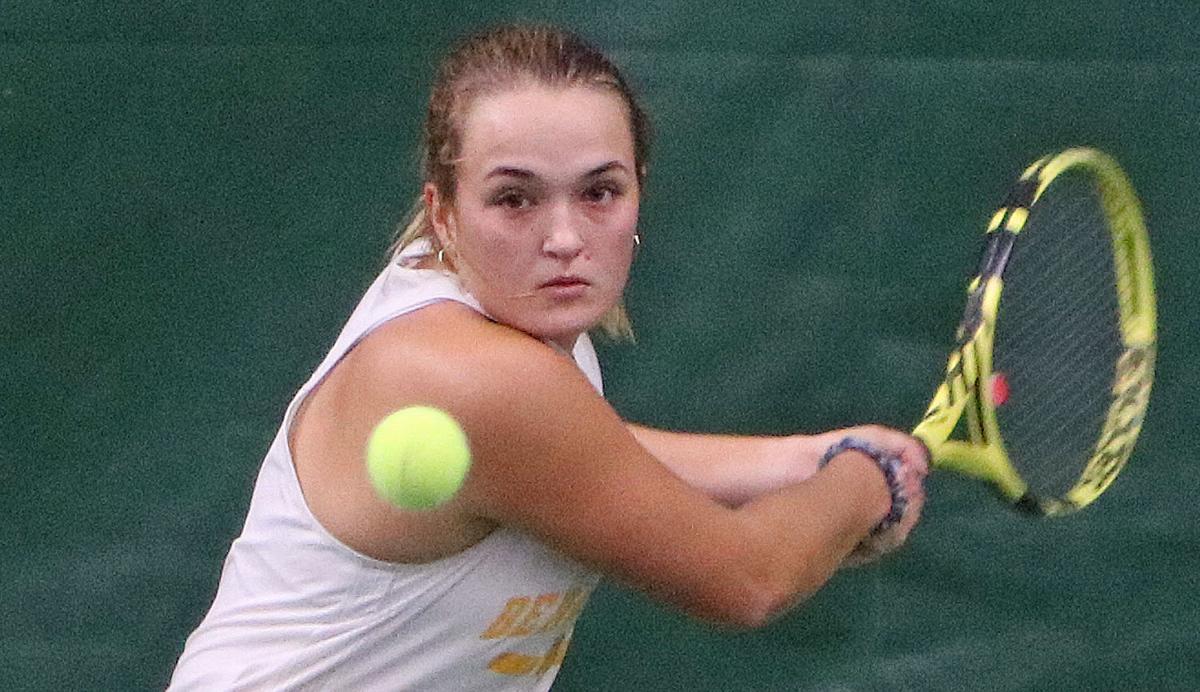 Beaver Dam's Morgan Nelson hits a backhand shot during her 6-2, 6-3 win over Slinger's Taylor Rhodes on Thursday afternoon in the first round of the WIAA Division 1 state tournament at Nielsen Tennis Stadium in Madison. 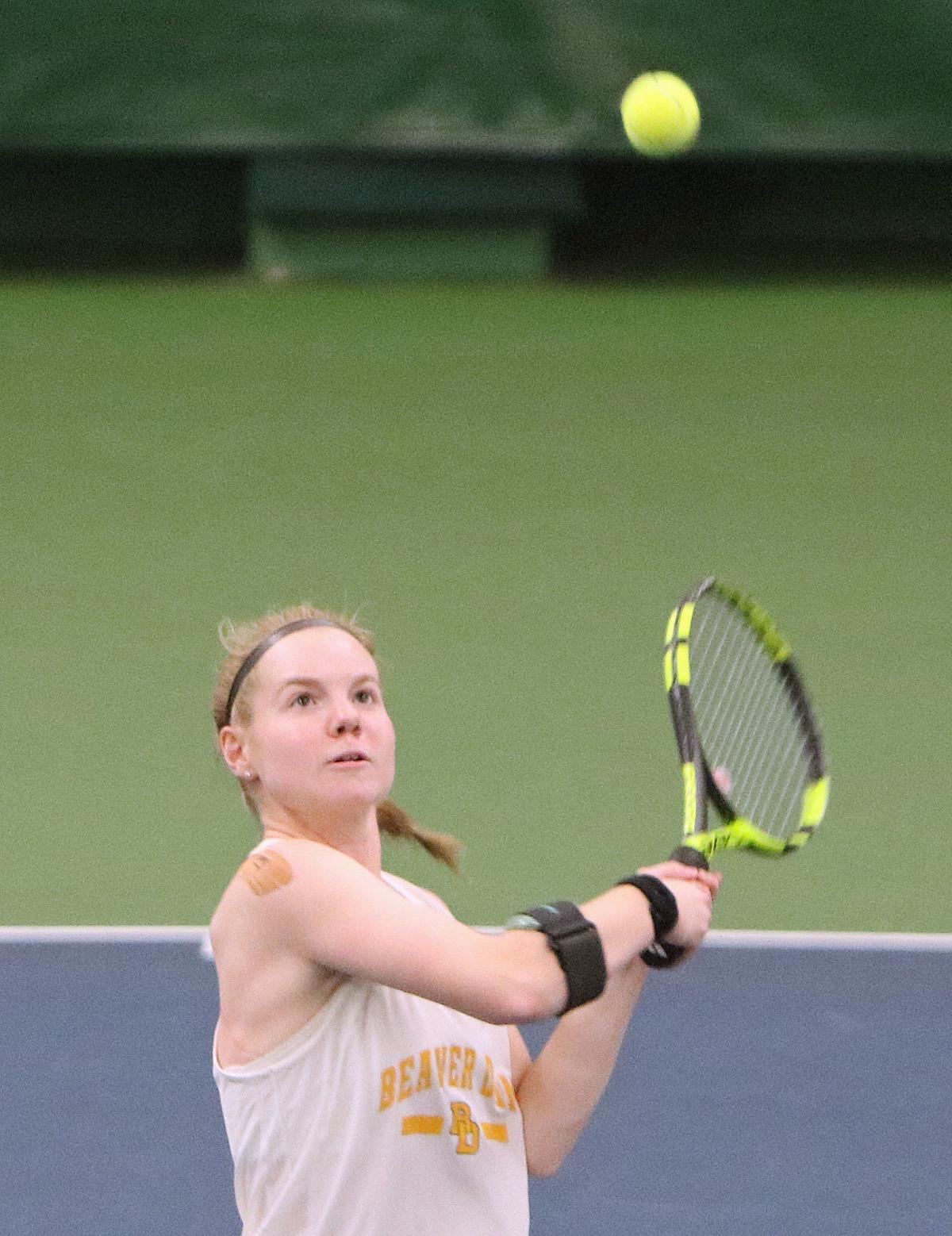 Beaver Dam's Abby Kiesow hits an overhead shot at the net during her and teammate Hannah Budde's 6-0, 6-4 win over Lake Geneva Badger's Sophia Strasser and Maya Lyng on Thursday afternoon at the WIAA Division 1 state tournament at Nielsen Tennis Stadium in Madison.

MADISON — Morgan Nelson was well aware of the challenge in front of her in Thursday afternoon’s second round of the WIAA Division 1 girls tennis state tournament. The Beaver Dam senior wasn’t seeded. Her opponent was.

Simple as that. It was going to take an upset for Nelson to extend her high school career.

That fate wasn’t in the cards, but she finished out in admirable fashion nonetheless.

Nelson rebounded from a lackluster first set against Verona’s Meredith Conley, the No. 11 seed among 16 seeded players in the 64-girl field, to put up a heck of a fight in the second set, ultimately losing 6-0, 6-4.

“She’s a good player,” Nelson said, “and I knew that was going to have to fight for every point.

It was an overall happy day for Beaver Dam, in fact, as Nelson’s 6-2, 6-3 win over Slinger’s Taylor Rhodes (19-12) in the first round started things off on the right foot and then the doubles team of senior Abby Kiesow and junior Hannah Budde notched a 6-0, 6-4 first-round win over Lake Geneva Badger’s Sophia Strasser and Maya Lyng.

Kiesow and Budde play in the second round at 10:15 a.m. Friday morning against the Mequon Homestead duo of Bridget Brown and Ellie Sprinkmann (27-0), who had a bye Thursday and are seeded seventh.

Nelson (28-7) won the second game of the first set against Conley (26-3) to even things at one game apiece but then Conley took the next five games to make it seem as though she might win the match comfortably.

The key to a better showing for Nelson in the second set?

“I worked on changing the height of the ball and throwing in more high, loopy balls, rather than in the first set I was kind of just going for more shots and hitting the ball as hard as I could,” she said. “I like to be aggressive, and I just kind of toned down how hard I was hitting the ball and focused more on consistency than trying to hit winners.”

“I was really happy to see (after) the first set (when) she was giving away a lot of points, she showed her character by fighting back (in the second set),” Beaver Dam coach Ryan Radig said. “She gave it a good run and lost to a good player. It’s not like she can look back and say, ‘Oh, I really didn’t give it my all.’ So it was nice to see for her.”

Nelson’s “all” just wasn’t quite enough to force a decisive third set — and consequently, her Beaver Dam career came to a close.

The four-time state qualifier, who also won a first-round match in 2017, will carry fond memories of her high school tennis career with her as she goes on with life.

“I really couldn’t have asked for a better team. I’ve met my best friends playing tennis, so it’s bittersweet (to have it end),” said Nelson, who also helped lead Beaver Dam to the Badger North Conference championship this season. “I’m happy with how far we came tennis-wise. I went from a freshman that didn’t know if I could make it to state, to winning the sectional this year and making it to the second round. So I’m happy.”

Radig, who has been Nelson’s tennis instructor since she was in third grade, was equally as reflective afterward.

“The last week or two, definitely since she won the sectional, it’s kind of hit her and myself that this is the end of a little era here. It’s kind of bittersweet,” he said. “The four years — it’s just been great. I care about her a lot — she’s a great kid — so I’m happy to have seen her grow. And I look forward to (following) her as she goes off and plays in college, too.”

Nelson did say she plans to continue playing in college but is undecided on where that will be as of now.

She said that she struggled a bit in the early going of her win over Rhodes but rather than press the issue chose instead to rely on advice given to her by Radig, which was to worry mostly about keeping the ball in play and let the rest sort itself out.

“That’s what I did,” she said, “and it was able to keep me in the match even though I didn’t feel very good.

“Obviously I’m at state so everybody that I’m going to play is going to be good — so I came in knowing that she was going to be good. So (the key was) just keeping calm and making sure that I wasn’t trying to go for too much or trying to hit shots that aren’t smart — just going and playing consistent.”

As for Kiesow and Budde, things really couldn’t have gone a whole lot better for them Thursday, with a dominant first set — “It was probably the best set I’ve seen them play since last year when they beat a really strong Sheboygan North team,” Radig said — followed by a gritty finish to the second set to close out the sweep.

“They put their foot down a little bit,” Radig said of Kiesow and Budde winning the last two games after it was tied at four-all.

The duo didn’t lose a point over the first three games of the first set and lost only a handful of points in all during that set, but things tightened up in the second set.

Turns out, they just needed to take a deep breath and relax.

“Just having fun (again) and trying to outlast them — get more balls back than them,” Kiesow said of the key.

“And neither of us wanted to go into a third set,” added Budde, “so that was definitely motivation to finish that one.”

“That’s been my goal, because I didn’t win my sophomore year (at state) either,” said Kiesow, who teamed with 2018 graduate Ashley Saniter that year. “I’m just thankful to be back here because I’m having a lot of fun.”

They did all the right things vs. Strasser and Lyng — “We definitely set up (shots) well and moved our feet a lot and took control of the net when we needed to,” Budde said — and they owe a lot of that to their attitude on the court, they agreed.

“We’ve been having a lot of fun playing together,” Kiesow added, “and I think that’s what helps us be successful.”

Beaver Dam's Morgan Nelson hits a backhand shot during her 6-2, 6-3 win over Slinger's Taylor Rhodes on Thursday afternoon in the first round of the WIAA Division 1 state tournament at Nielsen Tennis Stadium in Madison.

Beaver Dam's Abby Kiesow hits an overhead shot at the net during her and teammate Hannah Budde's 6-0, 6-4 win over Lake Geneva Badger's Sophia Strasser and Maya Lyng on Thursday afternoon at the WIAA Division 1 state tournament at Nielsen Tennis Stadium in Madison.