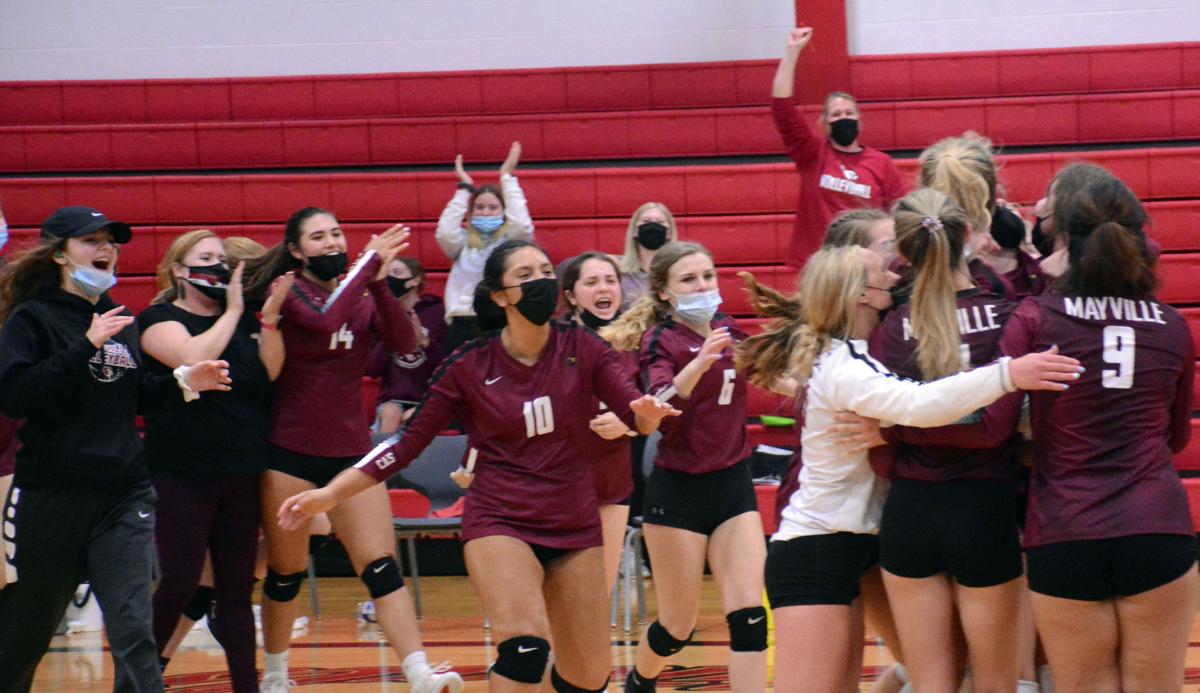 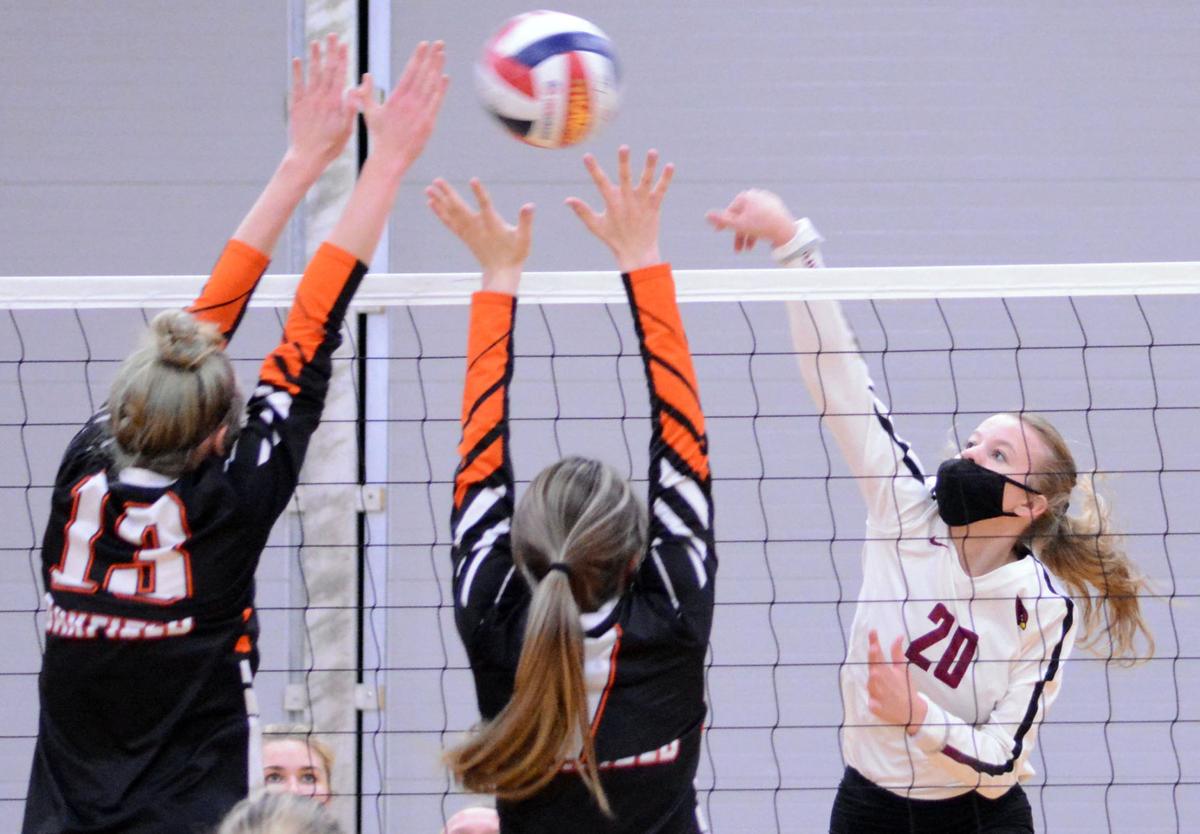 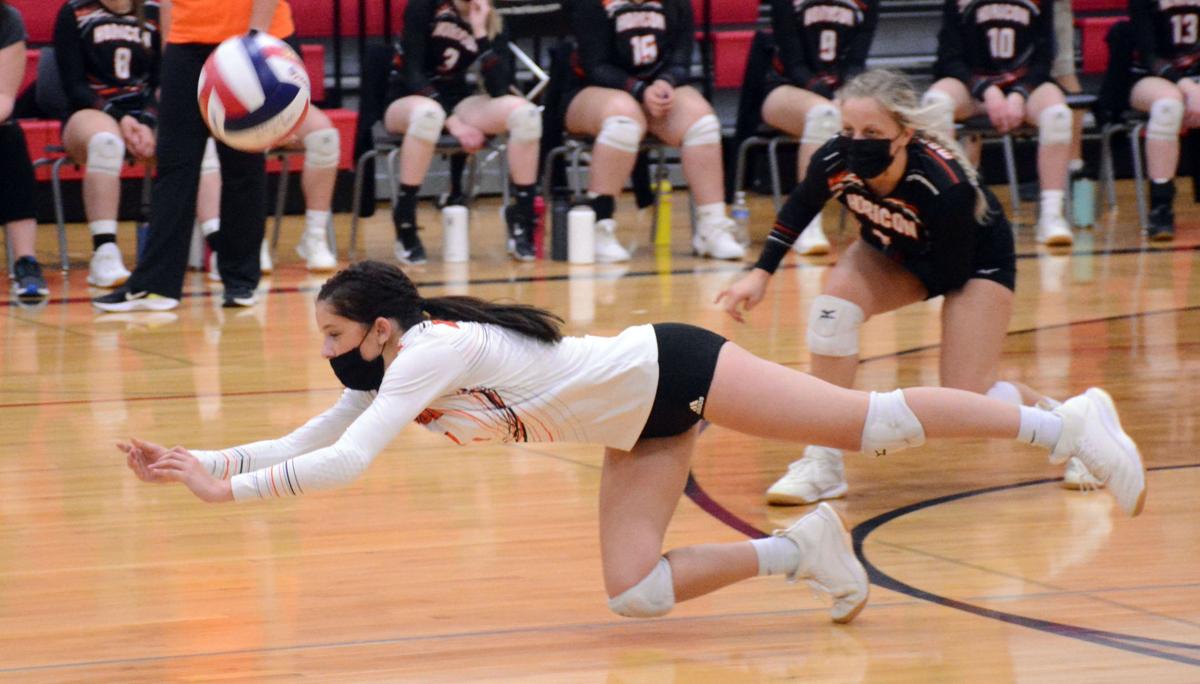 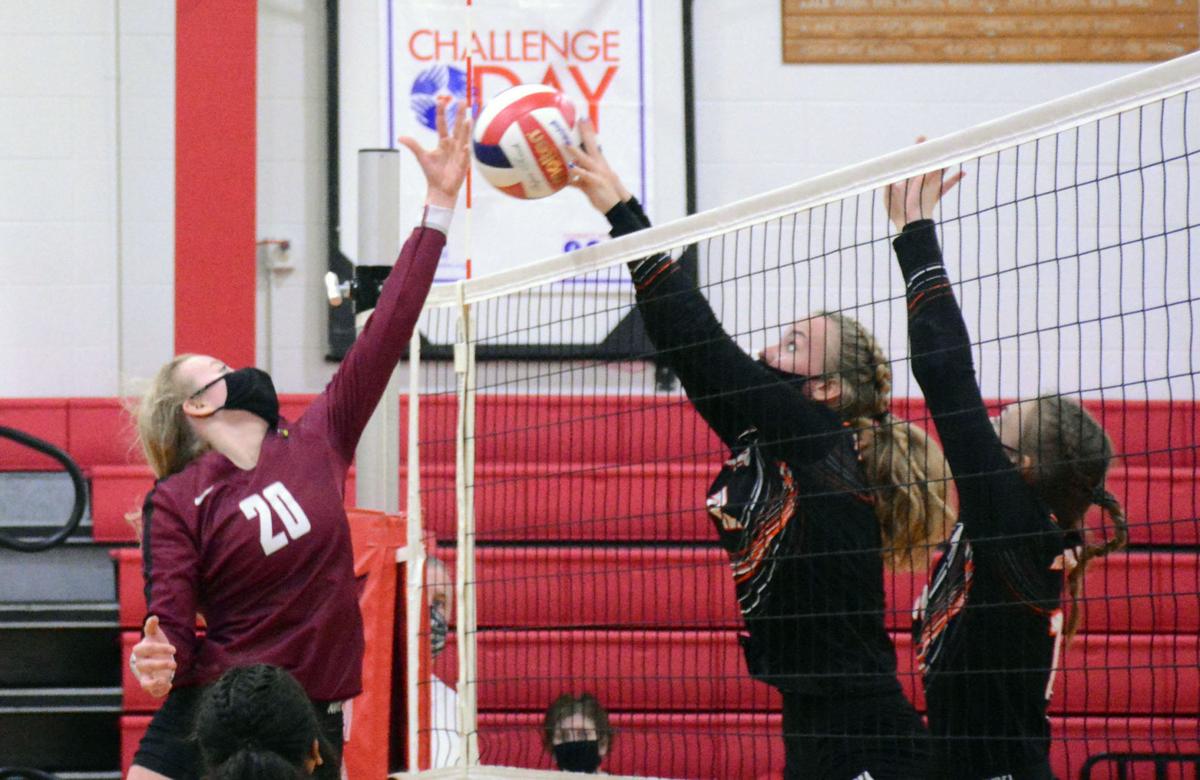 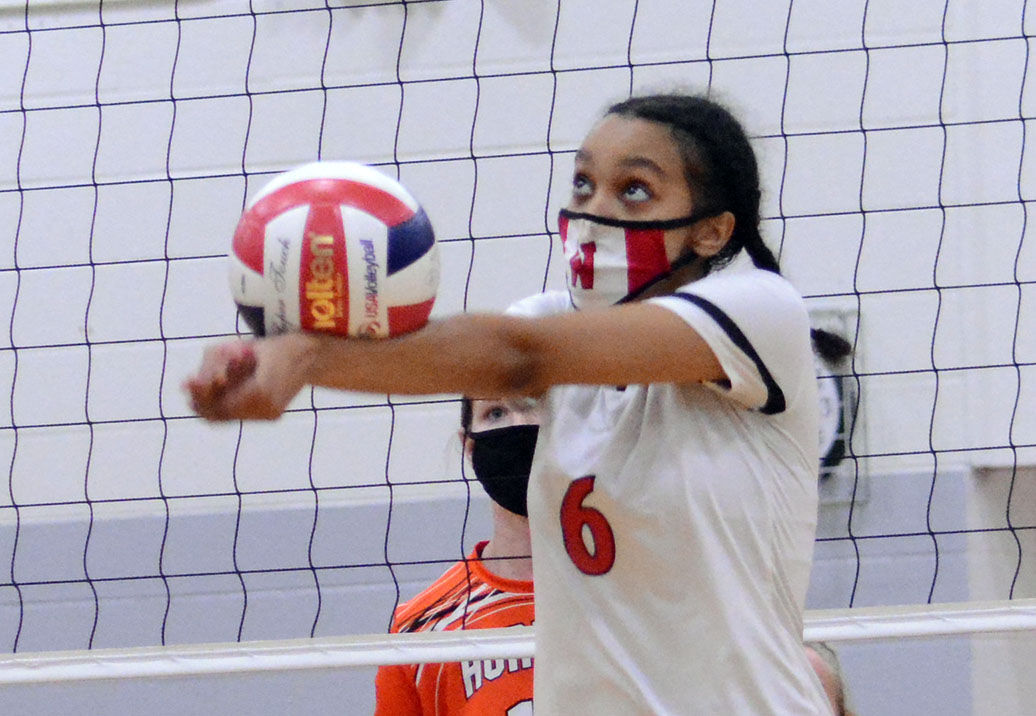 Wayland's Sandra Elgizooli sets up a teammate during the second set of Saturday's WIAA Division 2 semifinal against Horicon at Mayville High School.

Both the Oaks and the Marshladies gave the Cardinals everything they could handle all day long as five of the nine sets were decided by two points, and two more were decided by four points.

Persha said that at the end of the night she struggles answering questions about how valuable a player is for the current team. However, there’s no denying how critical both Maggie Vander Schaaf and Viv Smelcer meant for the Cardinals during Saturday’s tournament at Mayville High School.

Vander Schaaf had many critical moments throughout the day. She had 19 kills against Oakfield, and 13 kills and five aces against Horicon.

“She definitely is the most influential player on our team, in regards to both offense and defense,” Persha said. “Even when she’s having an off-night, she still needs to be in there on the court. Her off-night isn’t that bad of a night. … She’s just that all-around player you just want on the court.”

One of Vander Schaaf’s kills ended the second set 25-17 against Oakfield.

“Anytime you get down by a few points deficit, we know that it can be really hard to dig ourselves out of,” Persha said. “I think I just tried getting everyone involved that was here today to just keep supporting each other and let everybody know we believe in you. They had to believe in themselves. We just kept saying the same thing, ‘We have to play aggressive. We can’t play safe and we have to speed up our offense whenever we’re able to.’”

Vander Schaaf’s kill ended the second set 26-24 to tie the match at one set apiece against the Marshladies. She would then close out the third set with a spike, a block and another spike to win 25-23. Those three points also finished a 6-3 run for the Cardinals.

Meantime, Smelcer also had herself a day. She recorded four blocks against Oakfield, but saved her best performance for the championship match against Horicon. She rocketed a team-high 11 kills and finished with nine of the Cardinals’ 18 blocks.

“In our earlier match today, they were shutting down Viv,” Persha said. “They were triple blocking her and she was getting frustrated with that, but I was like, ‘Viv, they’re shutting you down, but it’s what allowing our other hitters to be able to get hits. It’s OK, keep doing what you’re doing. You’re still helping the team while being an impact.’”

The Mayville defense set the tone all day.

“We have always said our offensive starts with our defense,” Persha said. “We have to be tough at the net so our defense can set up, and know where the ball is going to go and where to cover on the court, so we can get the good pass. Without a good defense, you can’t really have a good offense.

“My blockers know I expect them to get up every time. … They’ve been doing a great job.”

Horicon coach Tara Boehmer said it was hard getting anything past the Cardinals at the net.

“They’re a good team that can block decent,” she said. “We just struggled with hitting around those blocks.”

Another Cardinal who had an incredible day was Kyra Kuehn. She finished with 18 kills against Oakfield and had nine kills and 20 digs against Horicon. Megan Schellpfeffer finished the day with 44 digs.

Mayville’s Melanie Giese finished the day with 42 assists, but her highlight of the day was when she topped off a nail-biter of a fifth set against Oakfield. She found a spot in the far right corner of the Oaks defense and set it there for an 18-16 victory.

The Marshladies started the championship match with lots of momentum. Down 22-16, Horicon went on a 9-1 run to close out the first set.

“That’s been the story of our season,” Boehmer said of the resiliency of Horicon. “There’s been so many games where we’ve been down and had to come from behind. We practice that in our gym quite a bit. These girls know how to answer back and they’re used to scores like that. They can come back, piece it all together and prevail.”

For the Cardinals, it was nerve racking to see a big lead lost in the first set.

“Yes, it was nerve racking, but I knew exactly what it was,” Persha said. “You can never give up trying your hardest no matter how many points we are ahead. I think at one point there was where they kind of thought, ‘Oh, we’ve got this.’ Then they got a little sloppy.”

The next four sets both Horicon and Mayville answered each other’s runs, but it was the Cardinals who found a way to win.

“Jenna is amazing,” Tara Boehmer said. “She knows this game inside and out. She knows if the ball is placed here, she knows exactly what to do. Her arms are just always there to either block or kill it.”

The Marshladies quickly jumped out to a 2-0 lead in sets over the Big Red.

Wayland coach Carl Michaletz said the Big Red had a lot of mental errors in the first two sets that hurt them, and that communication was a problem in the second set in particular.

Wayland, not wanting to end its season on a sweep, battled back in the third set. Michaletz said the Big Red picked up the energy and you could see the difference between the third set and the first and second sets.

The Big Red and the Marshladies were neck and neck until Wayland called a timeout while down 23-21.

“It was really impressive effort in that third set,” Michaletz said. “I thought we really battled with them, but they’re a really good team and they played well tonight.”

After the break, Wayland closed out the third set on a 4-0 run.

However, Horicon had two large runs in the fourth. The Marshladies started with a 10-4 run and then later closed out on a 10-3 run to advance to the championship match.

But the magic from the semifinals didn’t work for the Marshladies as the Cardinals prevailed and will now head to sectionals.

The Cardinals are the No. 3 seed and will play second-seeded Sevastopol on Tuesday at 4 p.m. at Chilton High School. The winner will play either top-seeded Fond du Lac St. Mary’s Springs or fourth-seeded Campbellsport in the finals at 7 p.m.

Wayland's Sandra Elgizooli sets up a teammate during the second set of Saturday's WIAA Division 2 semifinal against Horicon at Mayville High School.