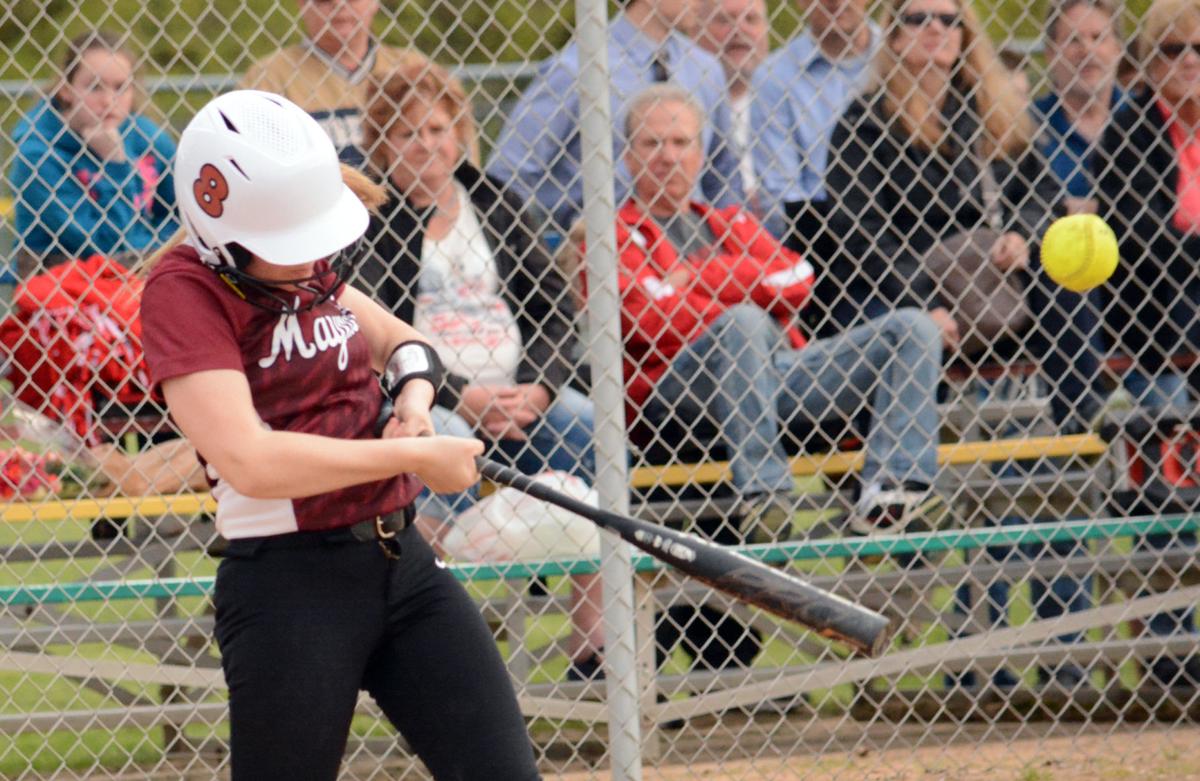 Mayville No. 9 hitter Shelby Liebenow hits a two-run single to right field in the fourth inning during Tuesday's Flyway Conference game against Lomira. 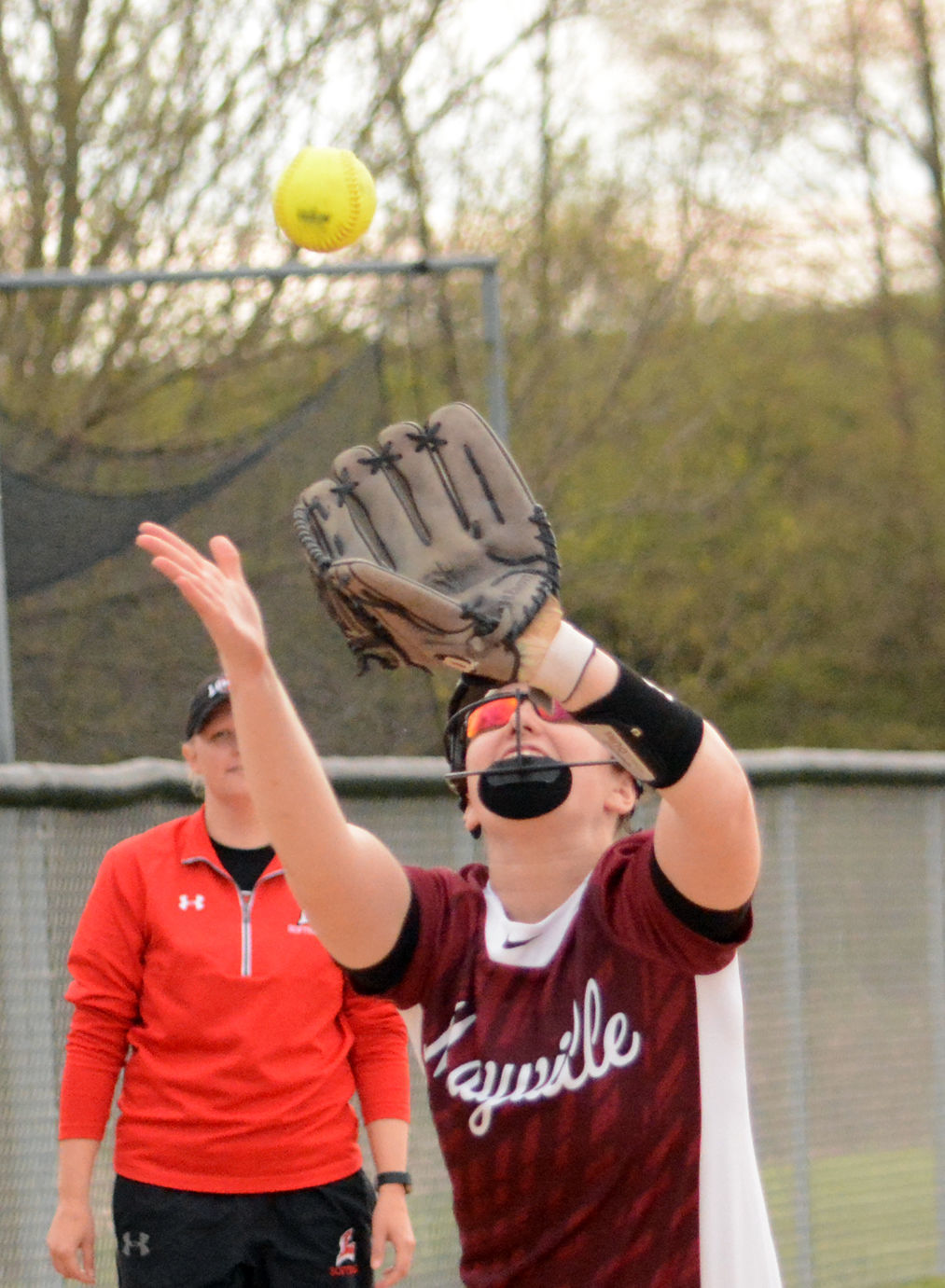 Mayville third baseman Ally Feucht catches a pop-up for the last out of the third inning of Tuesday's Flyway Conference game against Lomira.

LOMIRA — In the first three innings of Tuesday’s Flyway Conference game against Lomira, the Mayville prep softball team couldn’t get much going at the plate.

It wasn’t until No. 9 hitter Shelby Liebenow’s RBI single in the fourth inning gave the Cardinals the momentum they needed to beat the Lions 8-0.

“That was huge on Shelby’s part,” Mayville coach Steve Pliner said. “That broke the game open and got us started. Once we got started, we rolled.”

The victory marked the 24th straight league victory for the Cardinals (18-0, 12-0 Flyway). On Monday, the Cardinals — ranked second in Division 3 according to the Wisconsin Fastpitch Softball Coaches Association — were crowned Flyway champions when they defeated Fond du Lac St. Mary’s Springs 5-2.

“We like to think it’s ours right now and somebody’s got to come and take it from us,” Pliner said. “We’re trying to defend what’s ours.”

With two outs and runners on the corners in the fourth inning, Liebenow hit a blooper to right field that brought both runners home. Leadoff hitter Honoria Schabel doubled to right field to drive in Liebenow, and Emily Karvala’s RBI single to left made it 4-0 for the Cardinals.

“That’s what’s this team has fed off of,” Pliner said. “This team is feeding off of hits and feeding off of scoring runs. Once that happens, look out.”

The Lions (10-8, 9-3) didn’t have much of an answer after that because they had to battle against a deadly pitching duo of Abby Van Beek and reliever Delaney Vetter.

Van Beek pitched a solid five innings with three strikeouts while giving up just three hits and four walks. Vetter relieved her in the sixth and finished the last two innings with four strikeouts and gave up just one hit and two walks.

“Our pitching is really good,” Pliner said. “I’m really happy where our two pitchers are. That’s a tough combination to get after.”

The only Lion who could hit off either Mayville twirler was Riley Baetz, who went 3-for-4.

The Lions started the game out strong, getting the first three runners on base from a double and back-to-back Mayville errors.

Karvala — the catcher — picked off the runner at third base to fire Mayville up, and Van Beek retired the next two batters on an pop-up to first and a ground ball to third.

“Our catcher is as good as any catcher in this conference,” Pliner said. “She’s as good as most catchers we see all year, if not better. She just doesn’t get the credit for it. She’s a hardworking kid and great kid to have behind the plate.”

The Cardinals tacked on four more runs in the fifth inning, highlighted by Schabel’s two-run triple, to make it 8-0.

Top-seeded Mayville opens the WIAA Division 3 playoffs next Tuesday against the winner of No. 8 Springs and No. 9 seed Laconia. If the Cardinals win their opener and No. 4 Lomira can beat No. 5 Wisconsin Dells on the same day, then Mayville and the Lions could face one another for a third time this season in a regional final on May 23.

“If they play like they did in the first three innings, they’re going to be tough to beat,” Pliner said.

SOFTBALL: Mayville hopeful offense will wake up in time for D3 sectional semi against Campbellsport

The Mayville prep softball team missed out on a couple base-running opportunities and couldn’t string together some much needed hits, but the …

Mayville No. 9 hitter Shelby Liebenow hits a two-run single to right field in the fourth inning during Tuesday's Flyway Conference game against Lomira.

Mayville third baseman Ally Feucht catches a pop-up for the last out of the third inning of Tuesday's Flyway Conference game against Lomira.