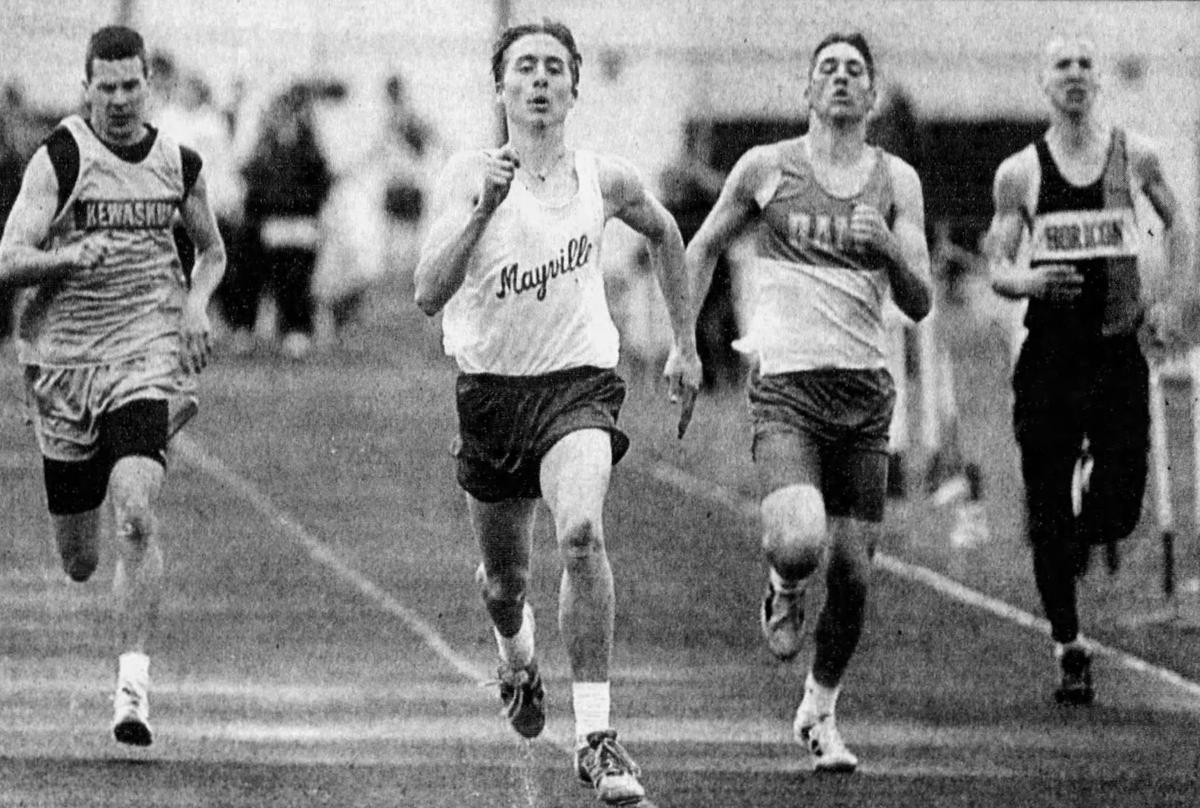 Mayville's Kevin Klueger (second from left) wins the 200-meter dash at the Division 2 regional meet his team played host to on May 20, 1996. He also was a member of the 1,600-meter relay team that broke the school record, one of 11 events won by the Cardinals as they took first place at the meet. 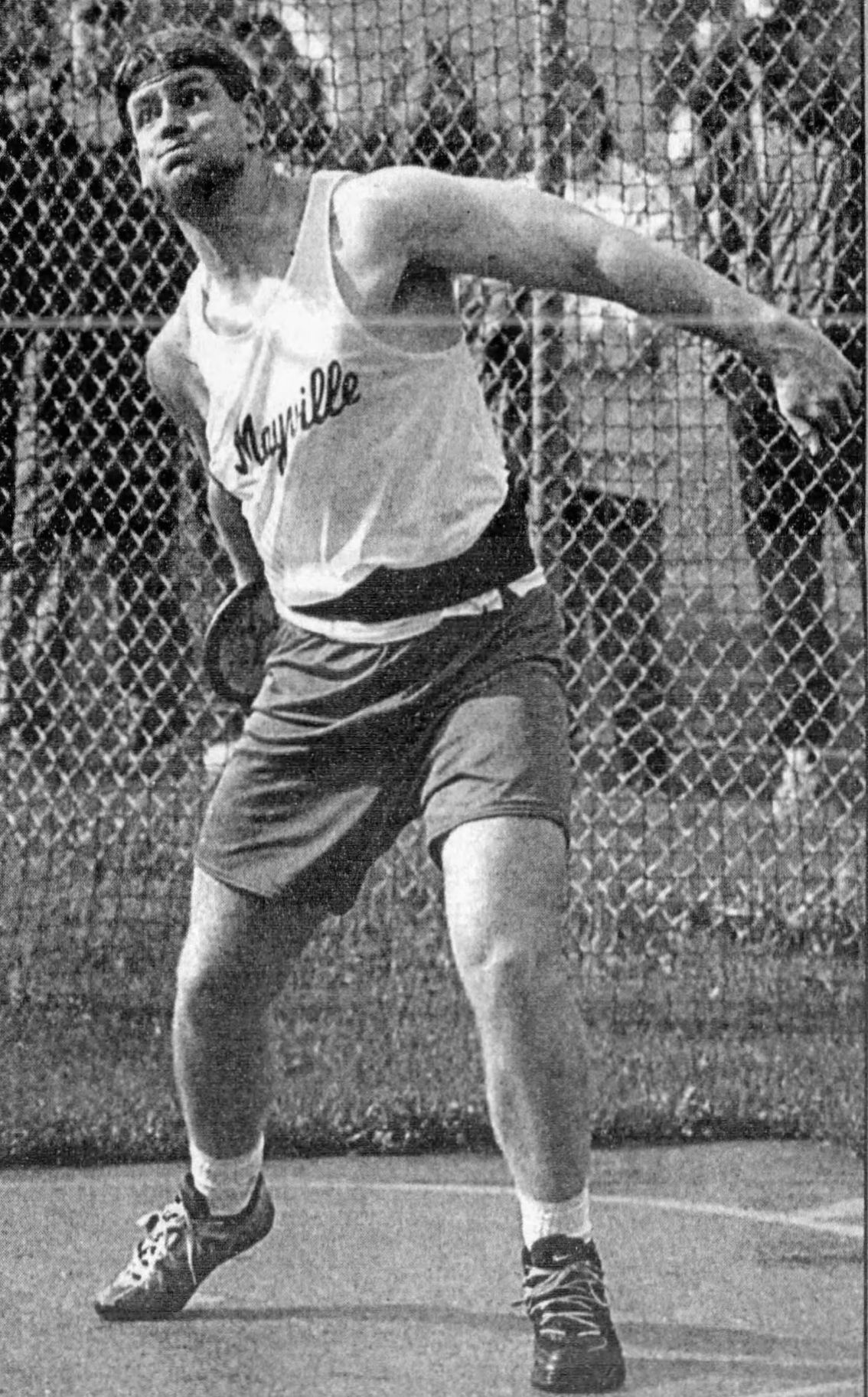 Mayville's Tom Breslow competes in the discus at the Division 2 regional meet his team played host to on May 20, 1996. The Cardinals boys team won 11 of 17 events and took second in the other six to win the title.

On this date in 1996, Scott Reed fired a 2-over-par 38 at Hartford Golf Course in the final Little Ten Conference meet of the year to become the Beaver Dam boys golf team's first individual conference champion since Rob Wendorf in 1982, and Matt Kenevan carded a 3-over 39 to finish seventh on the year, leading the Golden Beavers to the conference title for the first time since 1987. Also on this date in 1996, the Mayville boys track and field team took first or second in all 17 events, including a school record-breaking effort by the 1,600-meter relay squad (Korey Stortz, Jason Liegl, Mike Kehrmeyer and Kevin Klueger), to win a Division 2 regional championship.

Ryan Durant homered on the first pitch of the game as the visiting Waupun baseball team scored five runs in the top of the first inning then tacked on three more in the second, cruising to an 8-0 lead and an eventual 10-4 win over Beaver Dam.

Glenn "Big Dog" Robinson had 29 points, Ray Allen had 28 and Sam Cassell had 17 to go along with 13 assists to lead the Milwaukee Bucks to a 104-96 win over the Charlotte Hornets at the Bradley Center in Milwaukee in game 7 of an NBA Eastern Conference playoffs semifinals series, sending the Bucks to the conference finals for the first time since 1986.

Brian Hartl fired a four-hitter to lead the Beaver Dam baseball team to a 5-2 win over Hartford, keeping the Golden Beavers in the Little Ten Conference title picture.

The Beaver Dam softball team swept Hartford in a doubleheader, winning 3-2 and 7-2 to claim the Little Ten Conference title for the second straight year. Michelle Schneider homered in game two and Bridget Keel scattered 10 hits across the two games, striking out a combined 13 batters.

Sid Vander Galien won the high jump and took second in the 110-meter high hurdles and the 300-meter intermediate hurdles to lead the Central Wisconsin Christian boys track and field to fourth place at the Wisconsin Independent Schools Athletic Association state meet. Wayland's Alex Schwertfeger won the 200-meter dash and took second in the 100 in girls competition while CWC's Liz Oosterhouse won the 400 and took third in the 200. WISAA dissolved following the 2000 school year and its members joined the Wisconsin Interscholastic Athletic Association (WIAA).

Dave VandeBoom blasted a three-run homer to turn a 4-3 lead into a 7-3 lead and Mayville's baseball team held on to win by that same score, beating Markesan for the third time on the year to improve to 18-1. ... Green Bay Packers' linebacker Johnny Holland, the team's leading tackler both of the previous two seasons, announced his retirement due to a herniated disk in his neck.

Fueled by 23 hits, the Beaver Dam softball team won 14-1 and 20-0 over West Bend West to sweep a doubleheader and wrap up the Little Ten Conference championship for the second year in a row. Robin Schumacher was 6-for-7 with seven RBIs in the twin bill.

Michael Jordan was named NBA MVP for the second of five times in his career. A few weeks later his Chicago Bulls beat the Los Angeles Lakers 108-101 at The Forum in Los Angeles in Game 5 of the NBA Finals, giving Jordan his first championship.

The Milwaukee Brewers and Cleveland Indians were rained out at Cleveland Stadium, ending a record string of 458 major league games since Opening Day without a rainout.

The Milwaukee Braves game vs. the Chicago Cubs at County Stadium in Milwaukee was postponed because of dense fog, the first such time a game had been postponed for that reason.

The University of California dedicated $1,500 to research on the prevention and cure of athlete's foot.

Police raid the bleachers at Wrigley Field and arrest 24 fans for gambling. Pete Alexander tossed a complete game shutout as the Cubs beat the Philadelphia Phillies, 6-0.

The first jockey club, made up of wealthy horse owners and breeders, was formed in Charleston, S.C.

Mayville's Kevin Klueger (second from left) wins the 200-meter dash at the Division 2 regional meet his team played host to on May 20, 1996. He also was a member of the 1,600-meter relay team that broke the school record, one of 11 events won by the Cardinals as they took first place at the meet.

Mayville's Tom Breslow competes in the discus at the Division 2 regional meet his team played host to on May 20, 1996. The Cardinals boys team won 11 of 17 events and took second in the other six to win the title.