Chad Eberle belts a two-run double during the sixth inning against Oconomowoc on July 7, 1993, giving the Beaver Dam American Legion Post 146 varsity baseball team a 3-1 lead in its 4-1 victory. 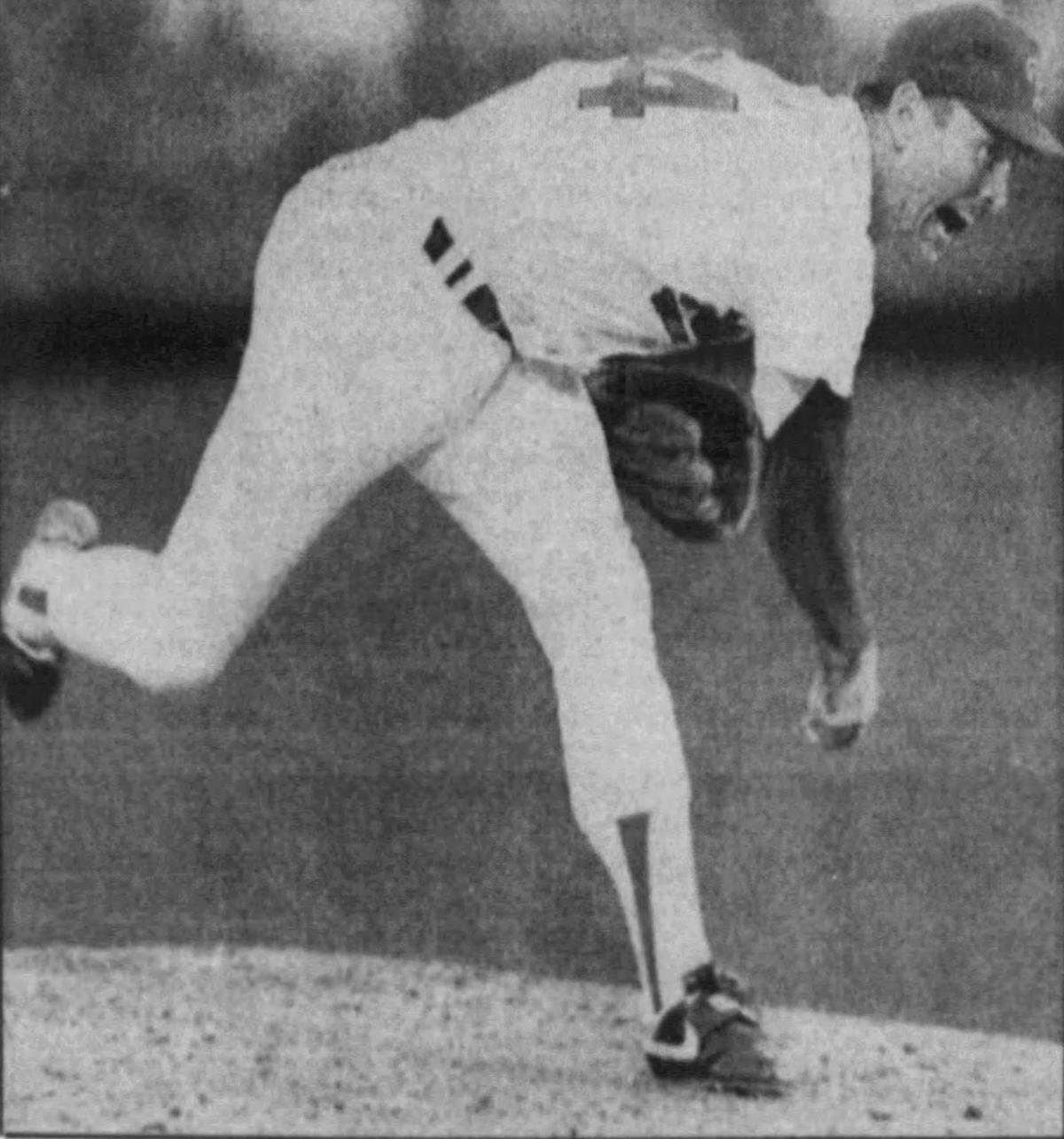 Texas Rangers' pitcher Nolan Ryan fires to the plate during a near-no-hitter in the Rangers' 7-0 win over the California Angels on July 7, 1991. He struck out 14 batters, including seven straight from the third through fifth innings, in a two-hit victory.

On this date in 1993, Chad Eberle broke up Oconomowoc pitcher Keith Heinrich’s no-hit bid with a leadoff single in the fifth inning. He then moved up 90 feet on a sacrifice bunt and stole third before tying the game at 1-1 on Kyle Christensen’s sac fly. Eberle’s two-run double in the sixth inning made it 3-1 in the Beaver Dam American Legion Post 146 varsity baseball team’s 4-1 victory. Relief pitcher Chad Voelker worked 3⅔ innings of scoreless ball, walking one and allowing two hits while striking out five to get credit for the win.

Nick Keel struck out nine and walked four while scattering seven hits in a complete-game 6-2 win for the Beaver Dam American Legion Post 146 varsity baseball team over Sun Prairie. He also had a two-run single during a four-run second inning that gave BD a 4-2 lead. Tim Knuth and Greg Furdeck followed Keel’s two-run single with RBI singles of their own to cap off the big frame.

Edgerton native and former University of Wisconsin golfer Streve Stricker won the Western Open by 8 strokes at Cog Hill Golf and Country Club in the Chicago southwestern suburb of Lemont, Ill. His 18-under-par 72-hole score of 270 was the fourth lowest in the history of the tournament that dates back to 1899. It was renamed the BMW Championship in 2007 and became part of the PGA Tour’s FedEx Cup playoff series, at which point the PGA Tour’s point system became the sole qualifyng standard and amateurs were no longer part of the field.

Boris Becker rallied from down a set and down four-games-to-one in the second set to beat Andre Agassi 2-6, 7-6 (7-1), 6-4, 7-6 (7-1) in the semifinals at Wimbledon on the 10 year anniversary of his win over Kevin Curren in the 1985, making him the youngest champion ever at 17 years old. The win over Agassi ended Becker’s eight-match losing streak to Agassi spanning six years.

Robin Yount passed Cap Anson for 12th on Major Leauge Baseball’s all-time career hits list with No. 3,082, a pinch-hit RBI single in the bottom of the eighth inning that gave the Milwaukee Brewers a 7-6 lead over the Texas Rangers at County Stadium in Milwaukee. The Brewers went on to win by that same score.

Pat Sommer’s RBI single in the bottom of the seventh inning gave the Beaver Dam American Legion Post 146 varsity baseball team a 3-2 walkoff win over Berlin. Sommer also had a two-out triple in the first inning and got BD on the board when he touched home on Dave Kranz’s RBI single.

Brad Franke’s RBI groundout and an RBI single by Derek Gittus gave the Beaver Dam American Legion Post 146 varsity baseball team a 2-0 first-inning lead over Ripon and BD tacked on three more in the second for a 5-0 lead en route to an 8-5 victory. Brad Franke was 1-for-3 with a triple and two RBIs for BD in the contest. ... Hall of Famer Dave Winfield was 1-for-22 with 13 strikeouts against Nolan Ryan but ended Ryan’s bid for an eighth career no-hitter with a single to center field to lead off the eighth inning. Ryan went 8⅓ innings, striking out 14 in a two-hitter as the Texas Rangers defeated the California Angels, 7-0.

The Milwaukee Brewers’ Don Money set an MLB record for consecutive errorless games at third base (78) in the Brewers’ 8-5 win over the Minnesota Twins.

After losing the first three All-Star Games, the National League got off the schneid with a 4-3 victory over the American League at Braves Field in Boston. The Chicago Cubs Augie Galan, Billy Herman, Frank Demaree and Gabby Hartnett each scored a run to account for all of the NL’s scoring.

The Philadelphia Phillies tied a single-inning record for stolen bases with nine during a 10-5 loss to the New York Giants, matching the mark set by the Washington Senators in 1915. No team has stole eight bases in an inning since.

American Jim Thorpe won four of five events en route to the gold medal in the pentathlon at the Summer Olympics in Stockholm but was stripped of the medal a year later due to having played professional baseball. The medal was reinstated in 1982.

In its 10 years of existence, the Tri-City Bulldogs semi-pro football team has called many places home, including Reedsburg, Princeton and mos…

A blister on his left index finger landed Anderson on the injured list to start the season.

Badgers basketball forward Micah Potter said he knew within 72 hours of meeting Loyola University volleyball player Elle Van Grinsven that she was the one.

In its 10 years of existence, the Tri-City Bulldogs semi-pro football team has called many places home, including Reedsburg, Princeton and mos…

When the WIAA Board of Control met on Friday morning in a meeting that was streamed live on YouTube, Portage High School athletic director Ed …

Eric Sogard's RBI single in the third inning is all Milwaukee needs during a 1-0 victory in Chicago.

It’ll be the first fall without football since 1896 in the conference, and the first since 1889 for the University of Wisconsin.

The outfielder, hitting .088, is given a "mental break," Milwaukee manager Craig Counsell says.

The athletic director and coach say any plan wouldn't amount to a full season.

Chad Eberle belts a two-run double during the sixth inning against Oconomowoc on July 7, 1993, giving the Beaver Dam American Legion Post 146 varsity baseball team a 3-1 lead in its 4-1 victory.

Texas Rangers' pitcher Nolan Ryan fires to the plate during a near-no-hitter in the Rangers' 7-0 win over the California Angels on July 7, 1991. He struck out 14 batters, including seven straight from the third through fifth innings, in a two-hit victory.