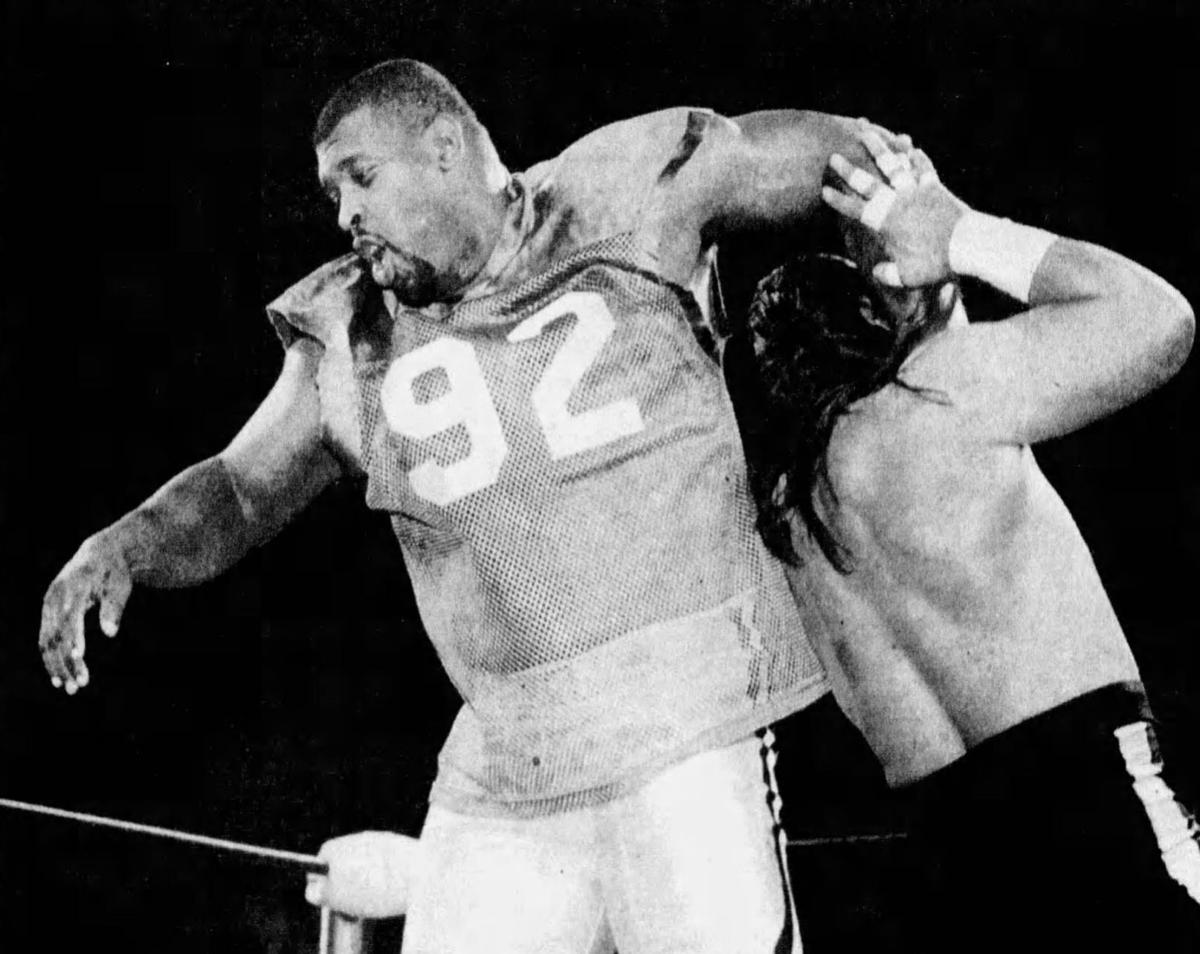 Reggie White (left), whose Green Bay Packers won Super Bowl XXXI four months earlier, wrestles former Chicago Bears' defensive lineman Steve McMichael during a match at the WCW Slamboree, a pay-per-view event held at the Independence Arena in Charlotte, N.C., on May 18, 1997. White lost the match after getting hit with a briefcase. 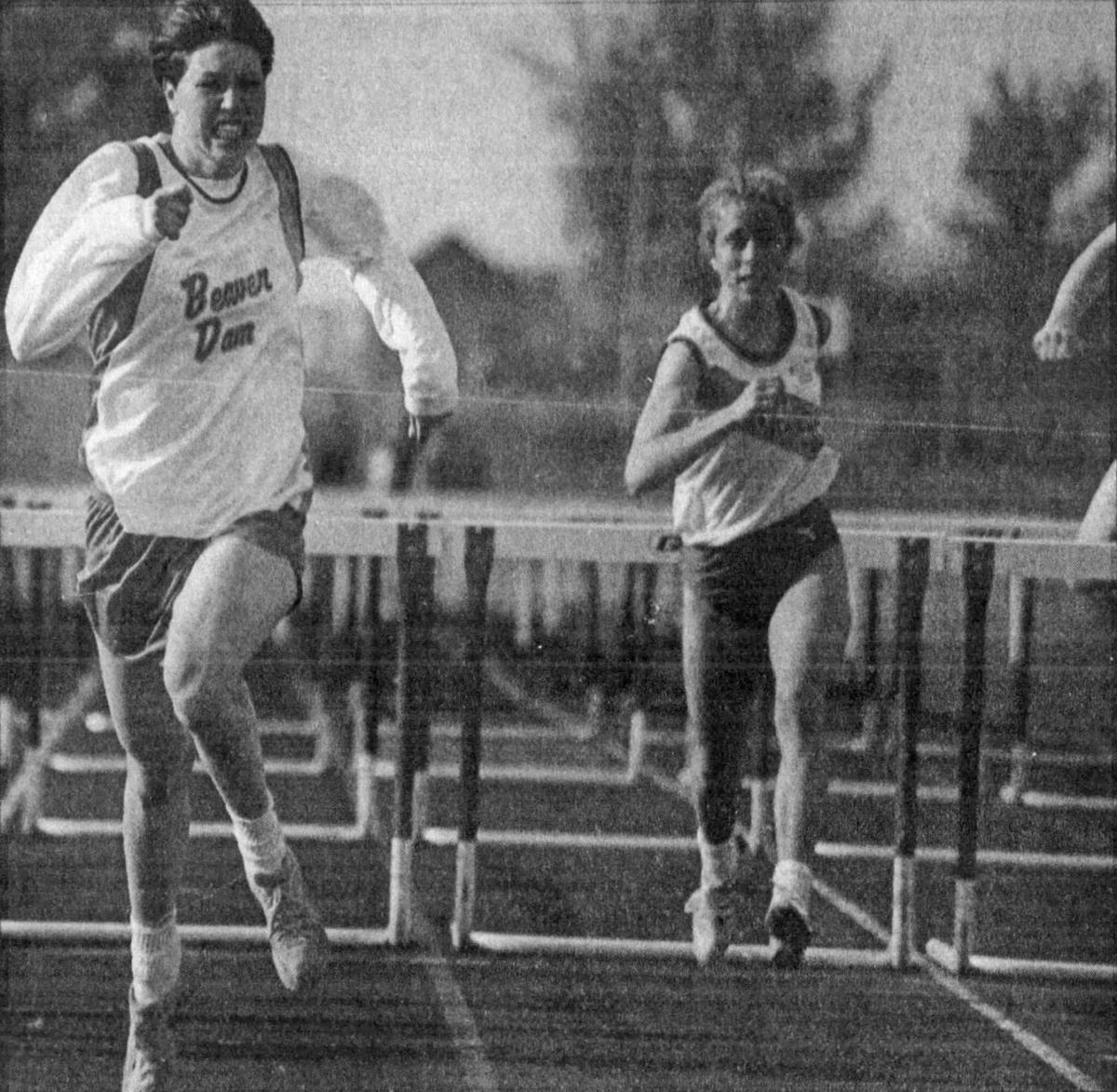 Beaver Dam's Michelle Linde (left) wins the 100-meter high hurdles during the Little Ten Conference meet on May 18, 1993. She also won the long jump, and took third in the triple jump and 300 low hurdles to account for 32 of the meet-winning 124 points scored by the Golden Beavers girls track and field team.

On this date in 1997, Reggie White of the Green Bay Packers, who won Super Bowl XXXI four months earlier, wrestled former Chicago Bears’ defensive lineman Steve McMichael during a match at the WCW Slamboree, a pay-per-view event held at the Independence Arena in Charlotte, N.C. White lost the match after getting hit with a briefcase.

Gabby Menomin scored twice and Kerry Griese stopped the only three shots on goal she faced as the Columbus girls soccer team pitched its 10th shutout of the season — in 16 tries — to beat Jefferson 4-0. ... Libby Schellpfeffer’s two-run triple to right field broke a 2-all tie and sparked an eight-run fourth inning for the Mayville softball team, sending the Cardinals on to a 10-4 win over rival Horicon. Schellpfeffer also twirled a gem in the circle, allowing only four hits while striking out 10 and walking none in a complete game effort.

The Horicon softball team, which entered the playoffs as the two-time defending Division 3 state champions and was ranked fourth in the state, got a two-hitter from Chelsie Held to win 1-0 over eighth-ranked Dodgeland. Horicon scored the lone run when Holly Sage hit a two-out double off the base off the wall in left field then pinch runner Amy Remich touched home on an RBI seeing-eye single to right field by Manny Reinecke.

Chris Jahn twirled a three-hitter, walking two and striking out three, to lead the Waupun baseball team to a 2-0 victory over Watertown Luther Prep in the Division 2 regional quarterfinals. Eric Desjarlais walked then scored on Derrick Straks’ RBI double to deep right field to give the Warriors a 1-0 first inning lead and added to the cushion in the sixth when Matt Pluim doubled then scored on Mike Vanderbush’s RBI single.

Mark McGwire homered three times and drove in all seven runs in the St. Louis Cardinals’ 7-2 win over the Philadelphia Phillies, giving him 539 career roundtrippers to break a tie with Mickey Mantle. The multi-homer game was also the 64th of McGwire’s career, breaking a tie with Willie Mays for second most all-time. Babe Ruth has 72. Barry Bonds (71) and Sammy Sosa (69) eventually passed McGwire, who finished his career with 67.

Pat Mallon’s two-run homer highlighted a four-run first inning for the Beaver Dam baseball team and that was more than enough for pitcher Eric Baldwin, who walked three, struck out five and allowed just one hit in the Golden Beavers’ 9-0 win over Waupun, which kept the tied for first place in the Little Ten Conference with Watertown, both at 7-3.

Dennis Rodman had 21 rebounds in the Chicago Bulls’ 121-83 blowout win over the Orlando Magic in Game 1 of the Eastern Conference finals. It was a much anticipated series between veterans Michael Jordan and Scottie Pippen of the Bulls and rising stars Shaquille O’Neal and Penny Hardaway of the Magic, who had beaten the Bulls in the conference finals the year prior after Jordan returned in March from a year-plus of playing for the Chicago White Sox Double A affiliate, the Birmingham (Ala.) Barons. The Bulls swept the 1996 series en route to their fourth title of the decade and first in their second three-peat of the decade.

Michelle Linde won the 100-meter high hurdles and the long jump and took third in the 300 low hurdles and the triple jump to account for 32 of the Beaver Dam girls track and field team’s 124 points at the Little Ten Conference championships, pacing the Golden Beavers to the title.

Amanda Quade went 3-for-4 to pace the Randolph softball team to a 13-10 win over rival Cambria-Friesland.

Michael Jordan scored only seven points after halftime, and none in the third quarter, but Scottie Pippen had 18 points, six rebounds and five blocks and Bill Cartwright had 16 points as the Chicago Bulls won 94-83 over the Detroit Pistons in Game 1 of the Eastern Conference finals. The Bulls would go on to win the NBA Finals for the first of six titles in the decade.

Cincinnati’s Paul O’Neil homered with two outs in the bottom of the ninth inning for a 1-0 win over the Cardinals during the Reds’ World Series championship season, the last year that Major League Baseball’s oldest franchise won the title.

The Oakland A’s Dave Stewart set a Major League Baseball record for balks in a season with 12, accomplishing the feat only 39 games into the year. He finished with 16 on the year,

Detroit Tigers outfielder Larry Herndon became the 14th player in Major Leauge Baseball history to homer in four consecutive at bats, doing so once in a game on May 16 and three times in his next appearance on May 18. The previous two times it had been accomplished were both by the Phillies’ Mike Schimdt, over the course of two games in 1979 and in one game in 1976. It didn’t happen again until 1990, when the Kansas City Royals’ Bo Jackson homered three times on July 17, was injured in the game, and homered in his first at bat coming off the disabled list on Aug. 26.

Frank Mahovlich scored two goals to lead the Montreal Canadians to a 4-2 win over the Chicago Blackhawks at Chicago Stadium in Game 7 of the Stanley Cup Final, sending the Habs to their record 17th championship. They won it five more times in the decade and have 24 total championships, although their title in 1993 is the last time a Canadian team won the title.

The New York Yankees’ Mickey Mantle homered from both sides of the plate in an 8-7 win over the Chicago White Sox at Comiskey Park in Chicago. It was the third such time Mantle accomplished the feat in a game and he would go on to do it seven more times for a total of 10. Nick Swisher and Mark Texeira are tied for the record at 14, both hitting that mark within two weeks of each other in 2015.

It was announced that the first All-Star Game between the National League and the American League would be played on July 6 at Comiskey Park, the home of the AL’s Chicago White Sox, as part of the Chicago World’s Fair, a celebration of the city’s 100th anniversary.

In protest of Ty Cobb being suspended for a game for going into the stands and physically assaulting a heckler three days earlier, the Detroit Tigers’ players refuse to play and the team is forced to field a line-up of amateurs, who lost to the Philadelphia A’s, 24-2. Two Detroit scouts, who recruited the line-up of amateurs from college teams and semi-pro teams in the Philadelphia, also suited up, with the 41-year-old Joe Sudgen playing first base and the 48-year-old Jim McGuire handling catching duties.

Reggie White (left), whose Green Bay Packers won Super Bowl XXXI four months earlier, wrestles former Chicago Bears' defensive lineman Steve McMichael during a match at the WCW Slamboree, a pay-per-view event held at the Independence Arena in Charlotte, N.C., on May 18, 1997. White lost the match after getting hit with a briefcase.

Beaver Dam's Michelle Linde (left) wins the 100-meter high hurdles during the Little Ten Conference meet on May 18, 1993. She also won the long jump, and took third in the triple jump and 300 low hurdles to account for 32 of the meet-winning 124 points scored by the Golden Beavers girls track and field team.