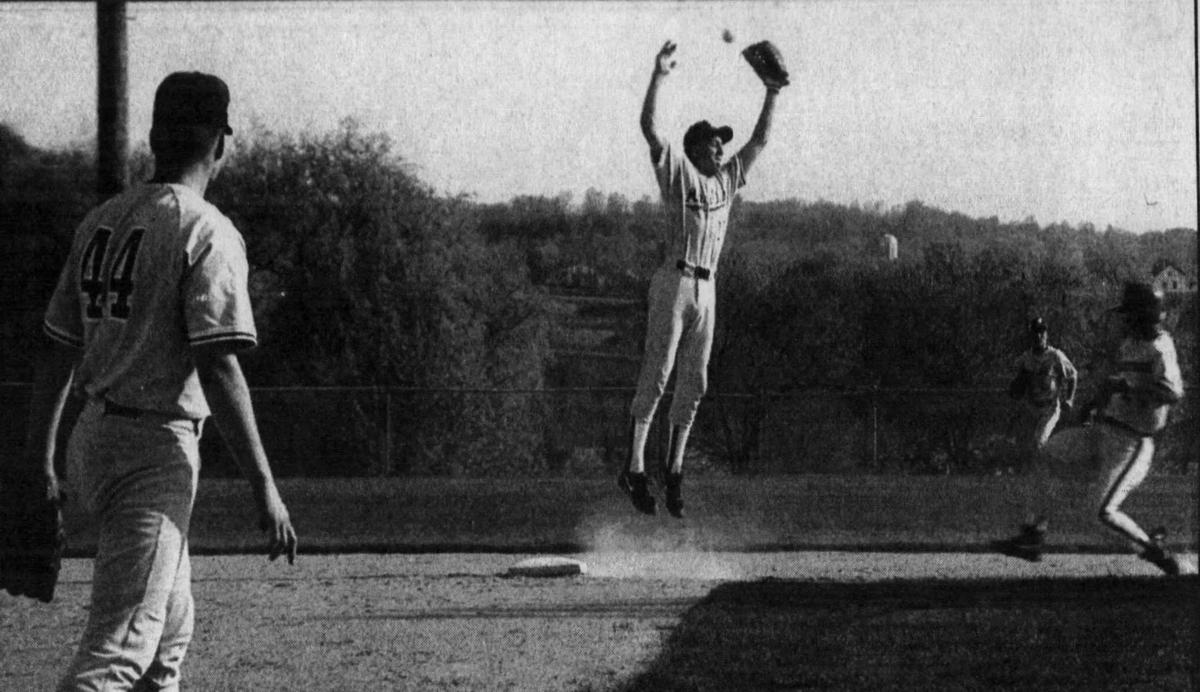 Mayville shortstop Brad Steinbach leaps up to catch a wild throw to second base during a Flyway Conference game against Laconia on May 11, 1993 at Fireman’s Field in Mayville. 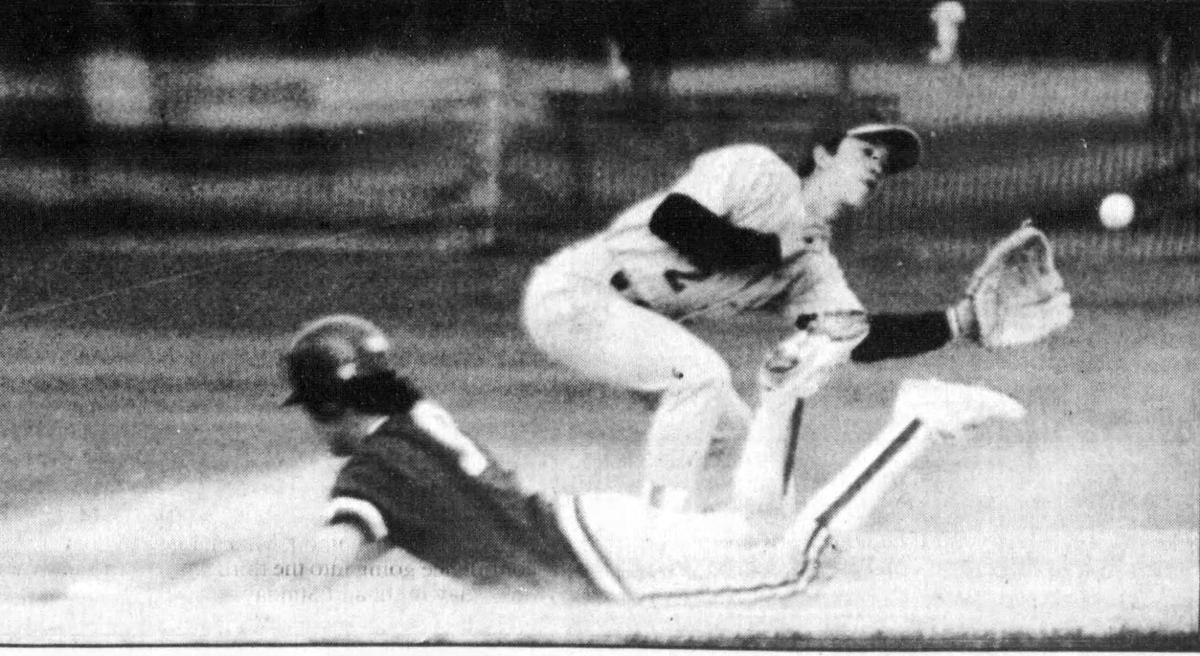 Wayland second baseman Nato Zuazua is about to catch the ball as a Stockbridge runner slides onto second base during a non-conference baseball game on May 11, 1994 in Beaver Dam.

Beaver Dam’s Kathy Braker, left, passes the baton off to teammate Mandy Vujnovich during the 800-meter relay event at the Fast Foot Invitational at Beaver Dam High School on May 11, 1995.

On this date in 1994, Mike Hansen’s suicide-squeeze bunt brought in the winning run in the bottom of the ninth inning to help the Wayland Academy prep baseball team edge by Stockbridge 2-1 in a non-conference game. Lincoln Nelson led off the ninth inning with a single and later stole second with no outs. He jogged over to third off a single by Nato Zuazua, and one out later came home off a bunt to help Big Red to improve to 8-6-1 on the season.

The Horicon prep softball team won the Arrowhead Invitational, beating Waterford 2-0 in the championship game that was shorted to just 5 2/3 innings due to rain. The Marshladies also defeated Waukesha Catholic Memorial 3-0. Horicon pitcher Brooke Schliewe was credited for both of the wins. She struck out nine batters in the title game and 11 against Catholic Memorial. She finished the regular season with 15 shutouts. Horicon’s Kate Sullivan had two hits including a double and two RBIs against Catholic Memorial. Horicon finished the regular season with a 19-1 record.

The Beaver Dam prep girls track and field team won the Fast Foot Invite at Beaver Dam High School with 86 points, which was just eight more points than second-place finisher Sun Prairie. Beaver Dam’s Mandy Vujnovich won the triple jump with a personal best 32-feet, 6 ½ inches and the high jump (4-10). She was also on the 1,600-meter relay team with Kathy Braker, Sarah Franke and Heather Ormont, which won with a time of 4 minutes, 24.89 seconds. Beaver Dam’s Sandy Bell and Ruth Luckas finished first and second, respectively, in the 800-meter run. Luckas’ throw of 33-9 ¾ was best in shot put.

The Mayville prep baseball team clobbered Laconia 13-2 in a Flyway Conference game to stay in contention for a league title. The win improved the Cardinals to 7-1 behind first-placed Lomira at 9-1. Mayville scored six times in the third inning to make it 6-1. The Cardinals tacked on five more runs in the fifth inning to put the game out of reach. Mayville pitcher E.J. Dornfeldt picked up his fourth win to stay undefeated and had two hits and two RBIs at the plate. Mayville’s Kyle Gassner went 3-for-5 with an RBI as teammate Jeremy Budahn went 2-for-4 with a home run in the sixth inning.

Beaver Dam’s Nina Schneider struck out 13 to help the prep softball team beat Hartford 8-5. Schneider only allowed five runs off of seven hits and seven walks. The Golden Beavers improved to 10-3 overall and 7-2 in the Wisconsin Little Ten Conference. The Golden Beavers tallied five runs in the first two innings. Beaver Dam’s Robin Schumacher, who went 3-for-4 at the plate, brought in two runs off of her triple in the first inning and Schneider’s single later brought Schumacher home to make it 3-0. Schneider went 3-for-4 at the plate with two RBIs. Beaver Dam’s Nikki Pinkerton also went 2-for-2 with two RBIs.

Wayland Academy named Dustin Johnson as its new football coach. He had been an assistant coach the previous fall and a math teacher. He took over for Steve Sharpe, who held the position since 1981. Sharpe stayed on as the Big Red’s wrestling and baseball coach. Johnson’s previous stop was at Gaylord (Minn.) High School where he was the defensive coordinator in 1988.

Mayville shortstop Brad Steinbach leaps up to catch a wild throw to second base during a Flyway Conference game against Laconia on May 11, 1993 at Fireman’s Field in Mayville.

Wayland second baseman Nato Zuazua is about to catch the ball as a Stockbridge runner slides onto second base during a non-conference baseball game on May 11, 1994 in Beaver Dam.

Beaver Dam’s Kathy Braker, left, passes the baton off to teammate Mandy Vujnovich during the 800-meter relay event at the Fast Foot Invitational at Beaver Dam High School on May 11, 1995.