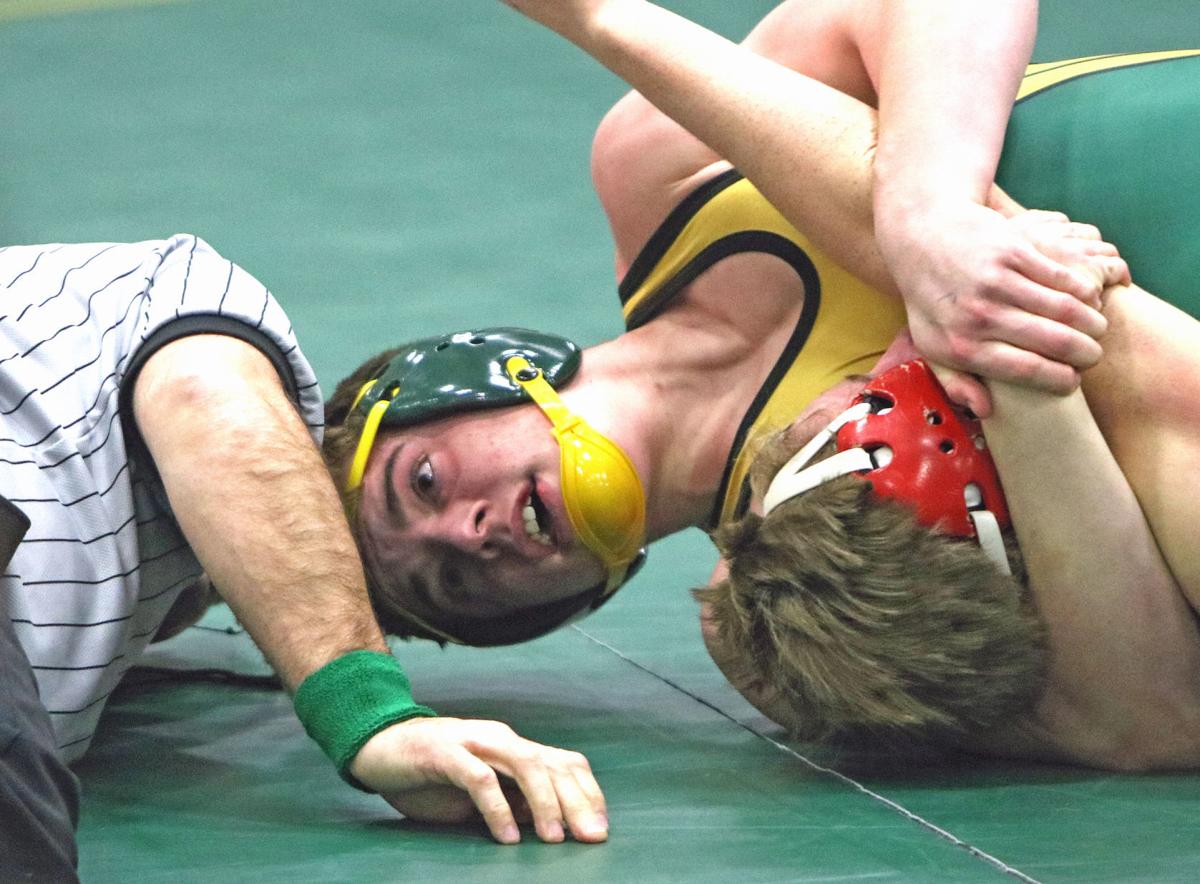 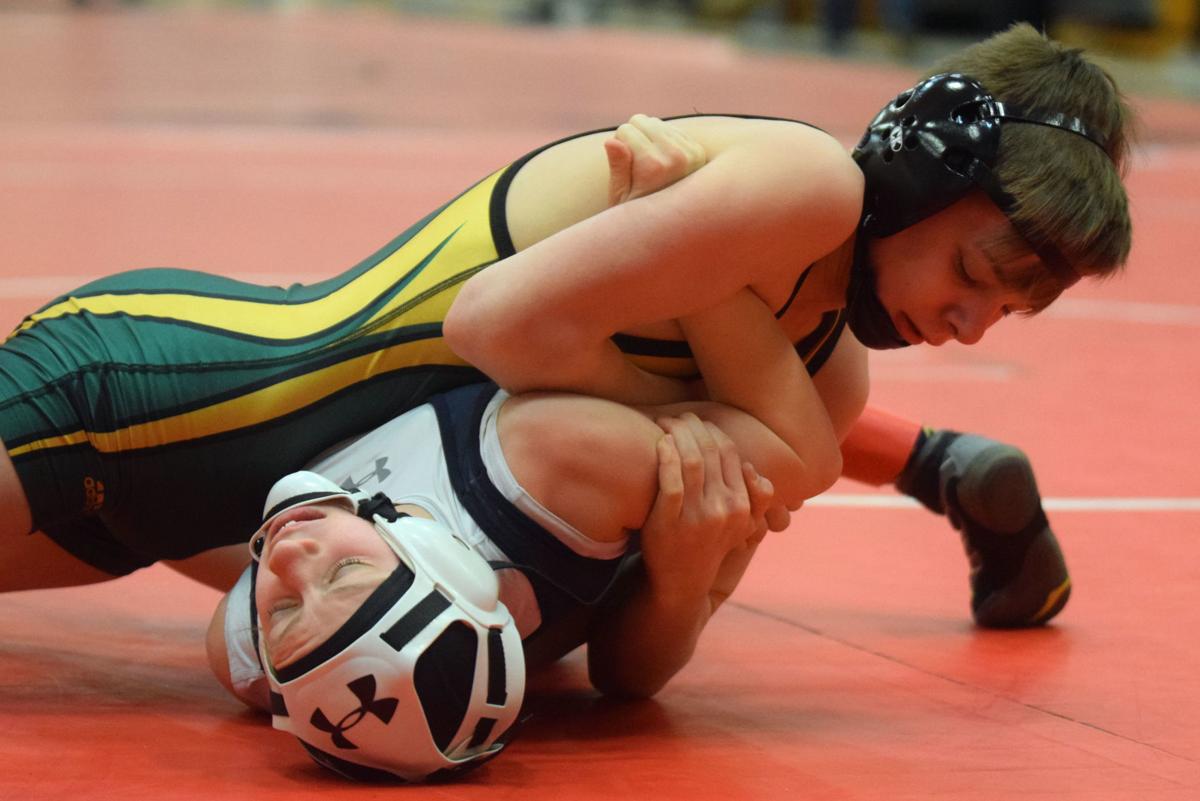 Beaver Dam's Kyler Neuberger (top) works to try and pin Baraboo's Alexis Winecke during a match in the 106-pound bracket at last year's Badger Conference Tournament at Fort Atkinson High School. The sophomore is one of the Golden Beavers' top wrestlers this season.

Tim Winker didn’t make any bold predictions. He didn’t guarantee this, or assure that, or say anything even close to bulletin-board worthy, for that matter.

What the coach of Beaver Dam/Wayland’s prep wrestling team did do, though, is make it clear he has high expectations for his squad this winter.

“I’m really excited about our lineup,” he said, “and our ability to compete with some quality teams across the state.

“In our conference, Waunakee and Baraboo look to start out with the toughest lineups based on the number of quality returning wrestlers they have. We feel that our lineup gives us the opportunity to compete with them this year and battle to finish in those top spots in the conference. In our regional, Slinger continues to be a great team, but we hope with what they have lost from graduation last year, that we can step up and challenge them for the top spot and an opportunity to compete at team sectionals.”

The strength for BD/W, which begins the season Friday night with a Badger North Conference dual at DeForest, is in the middle weights — where the Golden Beavers boast a trio of returning sectional qualifiers in Dietrich Jaeckel (145 pounds), Teegen McCormack (152) and Ian Wendt-Utrie (170).

Jaeckel qualified as a sophomore before a hand injury in mid-December of last year ended his season prematurely.

“He spends a ton of time in the weight room getting ready for the season — he’s a hard working kid and very explosive on the mat,” Winker said. “Being hurt last year I think frustrated him because he wasn’t able to accomplish some of the things he wanted. So being a senior this year, he’s looking to get it all in one year.”

Meantime, McCormack is down a weight from a year ago — and Winker thinks that sets up really well for him to have even greater success this year after he took third at sectionals last February.

“He’s actually come in in a little bit better shape this year so I think being at the lower weight class will help him have an advantage,” Winker said. “He should have a better strength advantage over his opponents because he has the same amount of strength but less weight.”

Wendt-Utrie remains at 170 for this season after also taking third at sectionals a season ago.

And like is the case for McCormack, Winker has high hopes for the fellow senior.

“Ian is a three-sport athlete, so he’s working hard all year round regardless of the sport. He puts a lot of time in the weight room and being committed to the sport he’s in,” Winker said. “He’s working hard in the practice room, so I’d like to see him be able to take that next step and get to state and possibly be a state place-winner.

“The way he’s capable of wrestling, there’s no reason he can’t be up on that podium at the end of the year at the Kohl Center.”

Also returning with high hopes for 2019-20 is sophomore Kyler Nueberger, a 106-pounder who was every bit talented enough to make it to state last year, but was blocked by a very tough bracket in his weight at sectionals. Sectional champion Alec Hunter, of Oshkosh West, went on to take fifth at state, and runner-up Carter Ziebell, of Slinger, came win one short of placing at state.

“So had he been at a different sectional he probably would have qualified for state,” Winker said. “He does a ton of offseason wrestling, so I’m really excited for his improvement and being able to take that next step this year.”

Like Jaeckel, senior James Brown also returns this year after missing all of last season due to injury.

Another individual Winker is excited about is 220-pounder Nick Ludowese.

“He has a lot of experience,” Winker said, “and we feel he will be another huge contributor for us this year.”

At this early juncture, Winker has 113 listed as an open weight with the starters alongside Neuberger, Jaeckel, McCormack, Brown, Wendt-Utrie and Ludowese being Hendrix, Graham, Frey, De La Cruz, Rosado, Rodriguez and Salazar.

“I do not predict that this will be our lineup for the entire year as a couple kids may move down a weight class as the season moves on, and our depth at a few weights gives us the advantage of some flexibility in our lineup, but most of the kids that we predict to use in our varsity lineup are (listed in the roster above),” Winker said. “That is not a full roster, just the ones that I predict would get the lion’s share of varsity time this year.”

And Winker expects them to compete well night in and night out thanks to depth and an ability to avoid giving up many bonus points.

“I think our biggest improvement from last year,” he said, “is that our weaker weights have improved — they may not be the strength of our line-up but they’re not a weakness.”

Beaver Dam's Kyler Neuberger (top) works to try and pin Baraboo's Alexis Winecke during a match in the 106-pound bracket at last year's Badger Conference Tournament at Fort Atkinson High School. The sophomore is one of the Golden Beavers' top wrestlers this season.