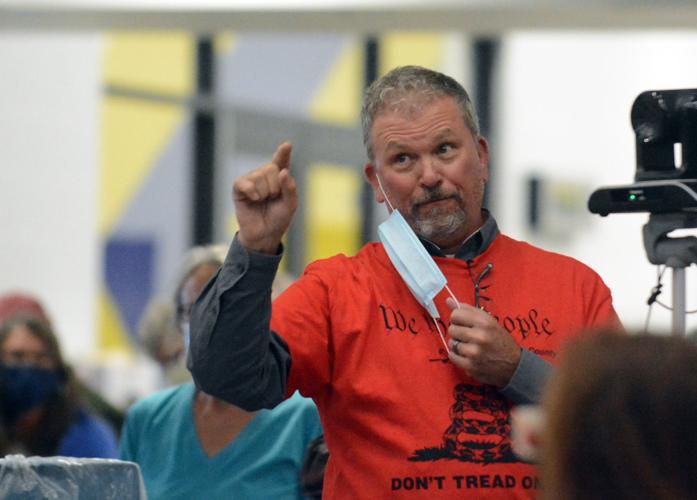 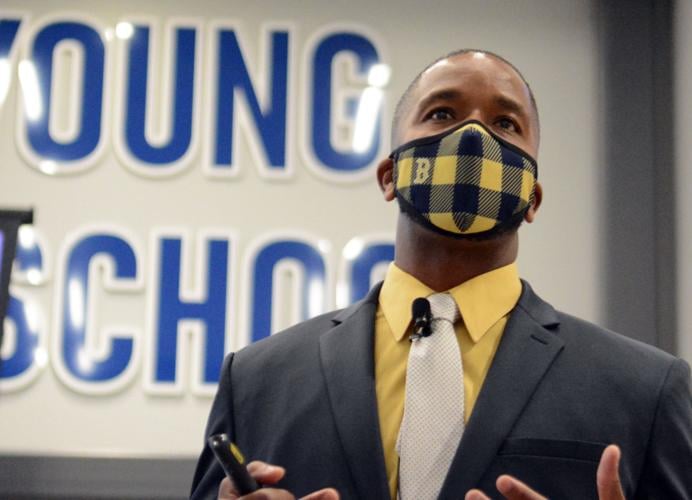 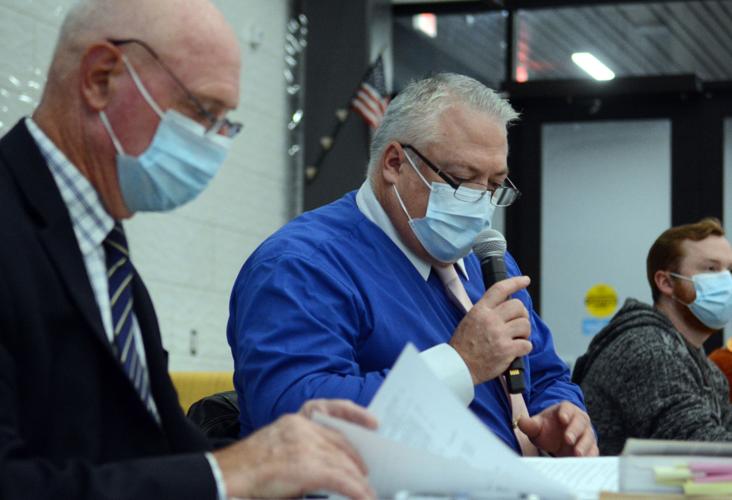 An unprecedented number of community members attended the Baraboo School District’s annual meeting Monday, raising school board members’ salaries over the vocal objections of a minority.

Held immediately following a ribbon cutting and open house at the newly-renovated Jack Young Middle School, the meeting drew roughly 300 people, including Baraboo’s mayor, members of the city council and Sauk County Board and state Rep. Dave Considine of Baraboo. At least two dozen community members wore matching red shirts emblazoned with “We the People Sauk County,” some of which featured the Gadsden flag.

Superintendent Rainey Briggs delivered his first state of the district address, at times speaking directly to the audience. He presented the district’s strategic plan, which was adopted in 2019 prior to Briggs’ hiring. It drives school staff and leadership, who “want to make sure that every kid that enters our schools know that they belong here,” he said.

“Our district values and affirms identities, beliefs and perspectives of all individuals, while providing every access to opportunities,” he said.

He asked the audience to discuss amongst themselves the district’s “core belief” of equity, part of its strategic plan, and shared an image to illustrate the difference between equality and equity: Equality was represented as providing the same amount of sunlight and water to different varieties of plants, even though it would kill those that need less sun or water; equity would be to give each plant the amount of sun and water it needs.

“We can give every one of your kids, every one of our teachers equal everything, but that still don’t make it right,” he said. “We will and will work really hard to make sure that everything we do is equitable, making sure kids’ needs are being met.

The annual meeting, which every public school district is required to hold, gives district residents of voting age — known as electors — the opportunity to make motions and vote on matters concerning the district, including how much it can collect in local property taxes.

Last year, about 30 electors attended the annual meeting — one-tenth of this year.

Their first test came with the nomination of chairperson, who can limit debate and call for votes on motions. Typically, Board President Kevin Vodak would be the sole person nominated to chair the meeting, but this year a member of We the People Sauk County nominated Scott Frostman, former chairman of the county’s Republican Party.

Vodak won with 224 votes to 69 for Frostman, taken by a show of raised hands.

Also by a show of hands, electors voted to increase school board members’ annual salaries by $1,000 each for 2021-22.

Peter Vedro, former chairman of the Sauk County Board of Supervisors, originally moved to keep their salaries the same as this year — $4,000 for president and $3,000 for the rest — but Louis Wenzlow of Baraboo proposed an amendment to raise them to $5,000 and $4,000 after asking when they were last raised. Vodak said it had been three or four years.

In response to a question, Vodak said he spends about 15 hours “on a slow week” working on district business, adding that the time commitment has gone up in the past year.

One of the We the People wearing a Gadsden flag, Steven Paske said nine people applied for the board’s recent vacancy, including him.

“So, there are many people willing to do this job for that money,” Paske said, eliciting some agreement from the crowd.

City Alderman John Ellington said, “You can’t pay people enough to be on this board,” which got a round of applause.

Electors also approved a standing resolution to reimburse board members for expenses when traveling on board-related business.

Doug Mering, former Baraboo School Board member and policy chairman, urged Baraboo residents via Facebook to attend the meeting, warning about the potential for a group to “show up to take over and be very disruptive.” He referenced the Kenosha school district’s annual meeting, in which local electors slashed school board members’ salaries, required them to attend meetings in person in order to be paid and recommended a decrease to the tax levy.

Marcy Huffaker, co-chairperson of the Baraboo Acts Coalition, a group that organized to promote diversity and equity after a viral photo showed local students making what appeared to be a Nazi salute, also emailed members asking them to attend the annual meeting.

In recent months, a group of local residents — often numbering between one and two dozen — has been regularly attending school board meetings to advocate for an end to the district’s mask requirement. Some, including Frostman, have taken issue with the district’s focus on equity and “culturally relevant instruction.”

At a meeting earlier this month, Frostman equated the district’s new policy on social-emotional learning and well-being with critical race theory, a concept originating in law schools which centers on the idea that racism is an inherent feature of the nation’s institutions. It has become a political lightning rod among Republicans.

The message to Baraboo Acts members said the anti-CRT group’s “agenda is not healthy for our community.”

Huffaker said she sent the email after hearing from “a number of people,” including Mering, who regularly attend school board meetings and have been getting concerned about the annual meeting.

“I thought it went really well,” Huffaker said Tuesday. “I was pleased so many people came to the meeting, and I heard some comments from other community members about how impressed they were with Dr. Briggs and his educational philosophy and they might not have heard as much if they hadn’t come to the meeting. And it was a really good show of support for the school board members and the time and effort they put into balancing the budget and doing all that they do for the school district.”

Paske said he also was glad to see so many people “coming together to support our children.”

“The will of the people was done, right?” he said when asked how he thought the meeting went. “... In a constitutional Republic, that’s exactly how it’s supposed to work, so I would be remiss if I complained about the outcome.”

He said We the People is “a constitutionally-minded group of folks, simple as that.”

Baraboo Police also made an appearance Monday. Asked after the meeting, one officer said he wasn’t aware of any specific security concerns and that their presence was “just a precaution” in light of some recent board meetings becoming “contentious.”

The Baraboo School District’s administration building will get about $51,000 in upgrades, likely over the winter holiday, after the school boa…

The Baraboo School Board authorized the addition of two new administrative positions Monday, citing a need for them and continued efforts to a… 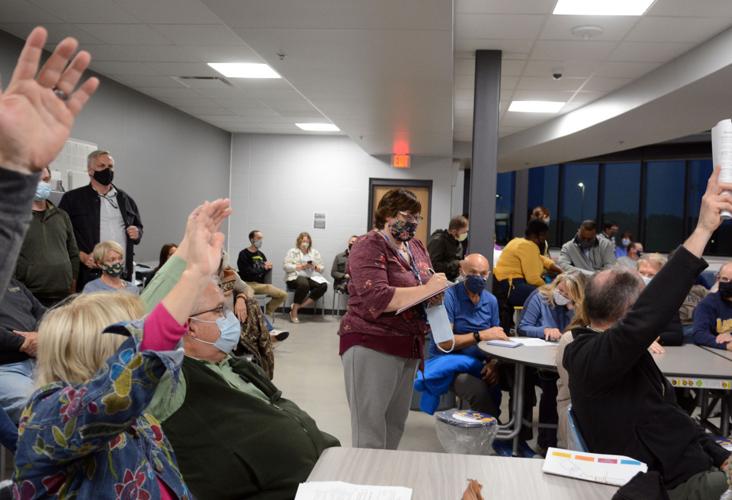 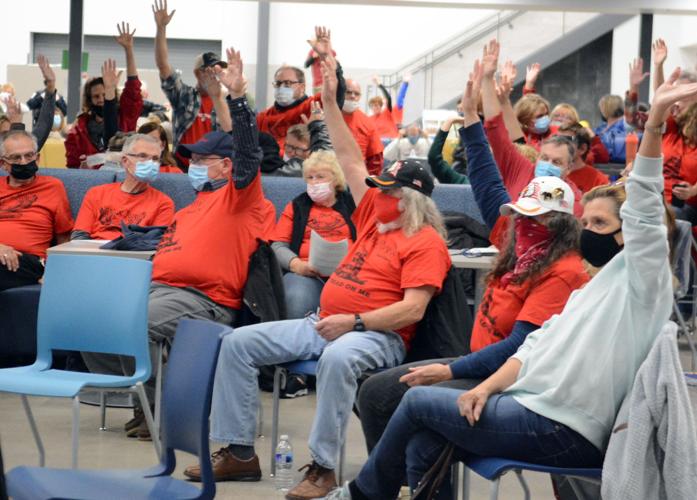