Columbus Self-Storage will soon have climate-controlled units when it opens in the spring of 2019 along Transit Road. 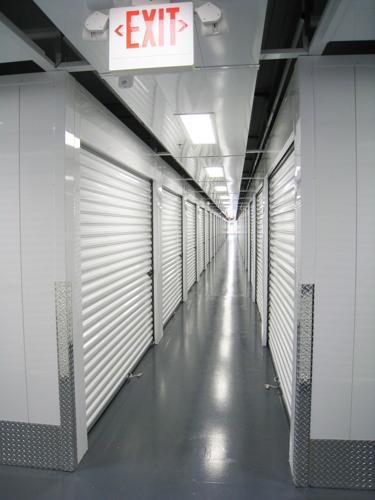 This rendering shows what the inside of Columbus Self-Storage will look like with climate-controlled units next spring.

Columbus will soon have a new option for storage. Columbus Self Storage, located at 395 Transit Road, is adding climate-controlled storage units. Site preparation is underway with a planned completion date of spring 2019.

The new units will be unlike anything in the area. The addition will total 20,000 square feet which will include 123 new units, offering both drive-up storage units and interior access units. Interior units will be accessible through hallways, with carts provided for easy move in.

The units will be temperature controlled with commercial grade humidity management to prevent freezing and extreme heat conditions. Some car collectors prefer climate controlled storage for more valuable vehicles, and the humidity control is also effective in helping to protect more sensitive antique furniture during storage.

Phase 3 will also bring improvements to the existing units. A new gate and fence is planned to control access to the entire property. A self-service kiosk is also planned to facilitate 24-hour rentals and payments. This will add an additional layer of security on top of the existing high definition camera systems.

Columbus Self-Storage opened in January of 2015, and added two additional buildings in 2016. The facility is owned and managed by Steve Hajewski and his wife Julie of Columbus, along with their silent partner. Columbus Self-Storage looks forward to offering this new level of service to Columbus and the surrounding areas.

For more information on rentals, contact Steve Hajewski at 608-217-7245 or through email at steve@columbus-storage.com, or reserve a unit online at Columbus-storage.com. Follow us on Facebook: facebook.com/columbuswistorage/.

Gregory Spittel, 33, Waupun, is accused of causing the death of his grandmother Carol Foreman, 75, in August 2019.

Gregory Spittel is charged in the 2019 death of his grandmother Carol Foreman. She was found near death in his basement and died four days later.

Green Valley Enterprises and Opportunities will merge to help individuals with special needs achieve independence through an array of services.

Columbus School District down to 3 finalists for superintendent position

The three candidates will be spending a day in the district next week.

Columbus Self-Storage will soon have climate-controlled units when it opens in the spring of 2019 along Transit Road.

This rendering shows what the inside of Columbus Self-Storage will look like with climate-controlled units next spring.