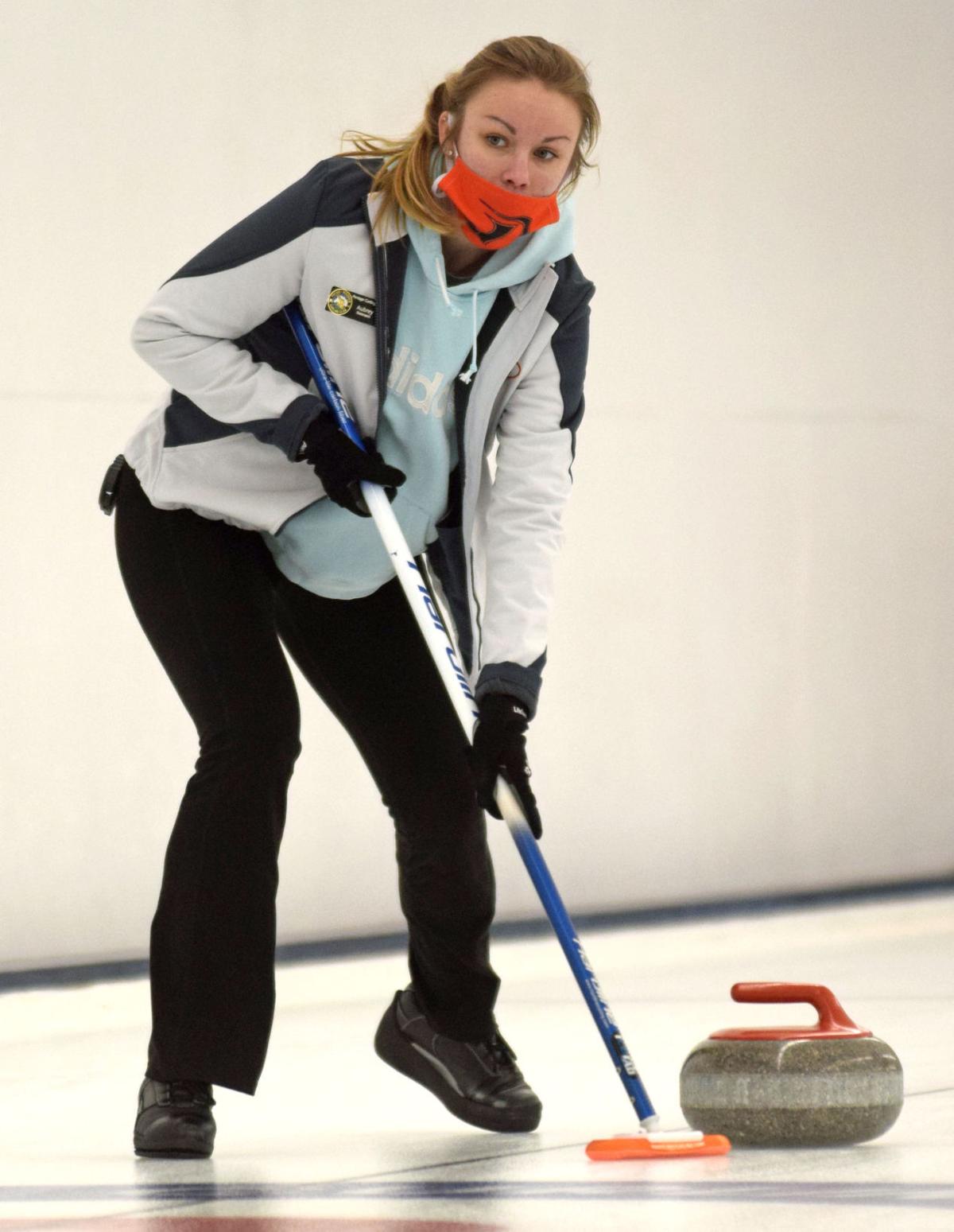 Portage's Aubrey Rietmann sweeps during a Southern Conference match against Poynette on Jan. 19. Rietmann and the Warriors went 2-1 in Friday's Southern Division Regional Playdowns at Arlington Curling Club to earn their way back to state to try and win a third straight Wisconsin State High School Curling Championship. 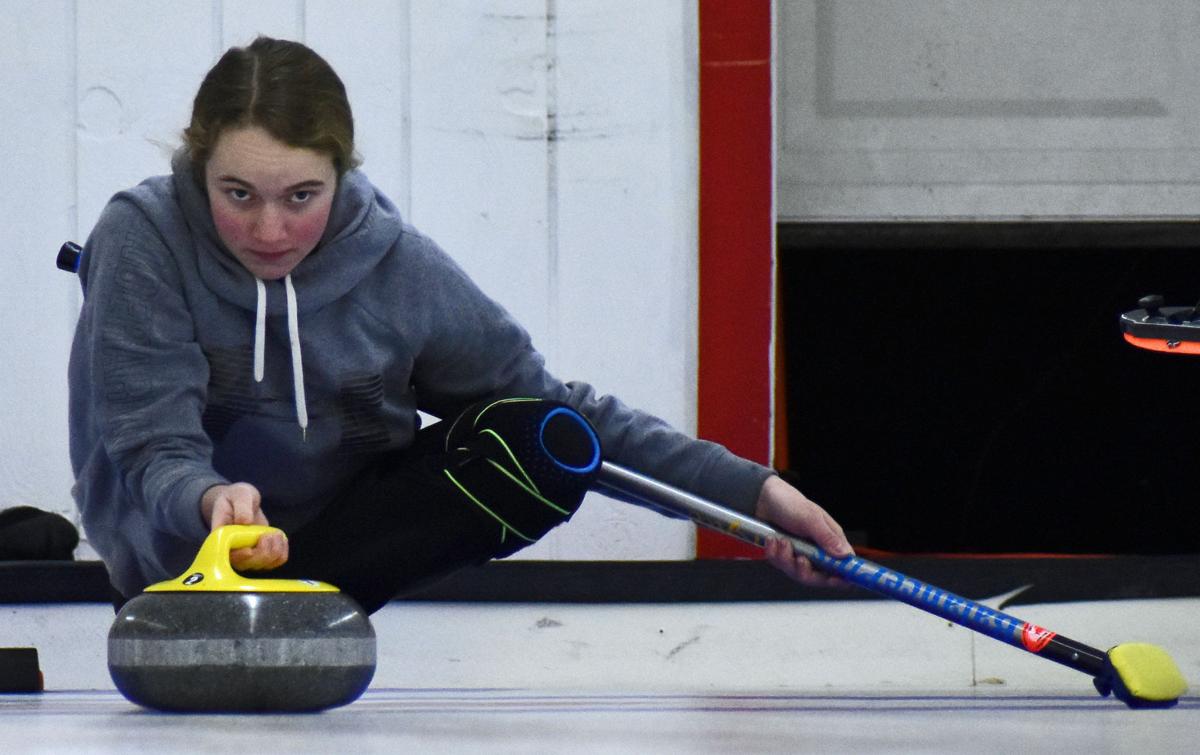 Pardeeville's Kylee Barden sends a stone down the ice during the sixth end of a Southern Conference game against Portage at the Portage Curling Club LAST SEASON.

The Portage girls curling team has been a regular fixture at the state tournament, capturing six of the last 11 Wisconsin State High School Curling Championships after their second straight last year.

The Warriors top rink will have a chance to go for a third consecutive crown next weekend after punching their ticket through in Friday’s Southern Division Regional Playdowns at Arlington Curling Club. The Portage team went 2-1 alongside Pardeeville, which earned the No. 1 seed after beating the Warriors in the head-to-head match-up.

The Bulldogs, skipped by Kylee Barden, rallied for a 6-5 win over Portage in the second match of the round-robin play-in that also included Poynette and Neenah. Despite starting without the hammer, the Portage rink, skipped by Lauren Hein, sandwiched stolen points in the first and third ends around two in the second for an early 4-0 lead.

Pardeeville, which also featured third Maddy Anderson, second Hailie Gilbert, lead Ilyana McGuire and alternate Morgan Warnke, answered with two points in the fourth before Portage scored one in the fifth to lead 5-2.

The Bulldogs started to bark from there, scoring one in the sixth before stealing another in the seventh to inch within 5-4. The Warriors had the hammer in the final end but ultimately squandered their chance as Hein threw her final rock four inches too long, allowing the Dawgs to steal two points and the match.

Portage, which also featured third Aubrey Rietmann, second Anna Tamboli, lead Emma Meicher and alternate Gracie Ann Kohn, didn’t sulk and rebounded in their final draw against the Rockets. The Warriors stole points in the first two ends before hanging a three-spot in the third for a 5-1 lead.

Neenah countered with a point in the fifth and stole another in the sixth to close within 5-3, but Portage shut the door with two in the seventh to punch their ticket back to state. The Warriors got their day off to a strong start breezing past Poynette, 10-2, while the Bulldogs topped Neenah, 9-3.

The Pumas, who fell to the Rockets, 8-6, in the middle draw, closed out their season on a high note against the Bulldogs. Poynette’s top team comprised of skip Jess Riedasch, third Abby Klink, second Peyton Kolberg and lead Savannah Koch, kept the Bulldogs from finishing off the day unbeaten, rolling to an 8-3 win.

With their matching records, the Warriors and Bulldogs advance to next Saturday’s state tournament in Stevens Point. Portage will meet the top seed out of the Northern Regional, Stevens Point, while Mosinee topped Wausau West, Wausau East, Medford and D.C. Everest to sup a match-up with the Bulldogs.

The boys Southern Regional also kicked off on Friday evening between Portage, Pardeeville, Poynette, Kimberly and Waupaca. The Warriors and Papermakers each played once on the day and will finish out their competition tomorrow with the top two teams again advancing on to the state tournament.

Photos of the Portage and Poynette curling teams competing in a Southern Wisconsin High School Curling League match on Tuesday, Jan. 19 at Arl…

ARLINGTON — With the Portage, Poynette and Pardeeville Curling Clubs remaining closed this year, there was speculation the prep curling season…

YEAR IN REVIEW: Part two of the top Portage-area sports stories from 2020

Editor’s note: This is the second of two articles in which the Daily Register unveils its top 10 sports stories of 2020, as selected by its ed…

When it comes to the sport of curling in the state of Wisconsin, Columbia County has one of the richest traditions.

STEVENS POINT — The Poynette and Portage boys curling teams were incredibly familiar with one another having met three times already this season.

Portage's Aubrey Rietmann sweeps during a Southern Conference match against Poynette on Jan. 19. Rietmann and the Warriors went 2-1 in Friday's Southern Division Regional Playdowns at Arlington Curling Club to earn their way back to state to try and win a third straight Wisconsin State High School Curling Championship.

Pardeeville's Kylee Barden sends a stone down the ice during the sixth end of a Southern Conference game against Portage at the Portage Curling Club LAST SEASON.