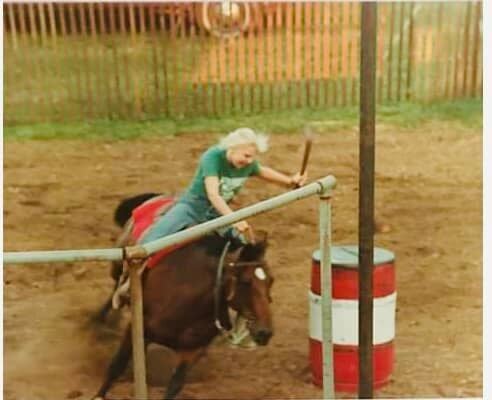 Then-teenager Nancy Kruse rides her horse at the Columbia County grandstand. Horseback riding was one of many activities that took place at the grandstand, along with sports and concerts. 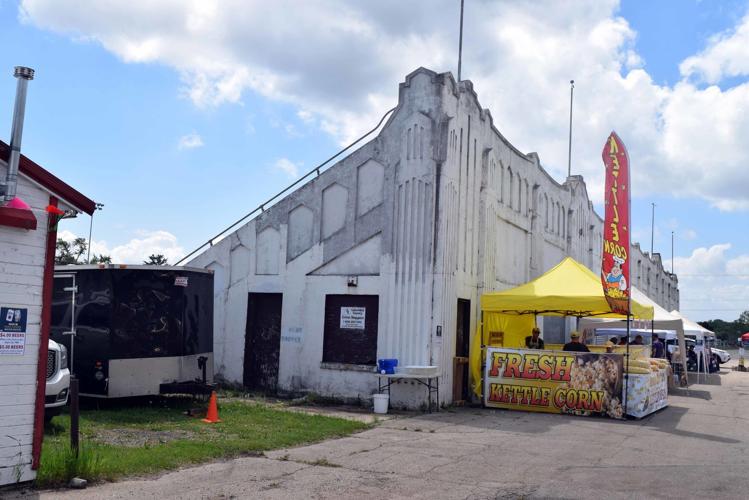 The first annual Save the Grandstand Arts & Crafts Festival held at the Columbia County Fairgrounds in 2021 featured over 80 vendors and live music.

Photographs of horseback riders, baseball players, and fair-goers prove that the imposing white seats situated at the Columbia County fairgrounds wasn’t always the weather-damaged, graffiti-coated structure rising out of the ground that it is today.

It’s the memories held within, the history, the nostalgia that members of the nonprofit group Save the Grandstand are hoping to preserve. For the past two years, members of the group have been organizing online auctions and craft sales, trying to raise money to complete necessary repairs and effectively bring the grandstand back to life.

According to Nancy Kruse, Treasurer of Save the Grandstand, these efforts have so far culminated in about $33,000, a number she’d like to continue to see grow at the group’s Sept. 24 fundraiser.

Community members are invited to come to the Portage Elks Lodge between 1 and 5 p.m. when photos and other grandstand memorabilia will be on display, a silent auction will be taking place, and attendees can help themselves to a plate of barbecue sandwiches, various salads, and a side of nostalgia.

Built in 1935 as part of President Franklin D. Roosevelt’s Depression-era public works effort, the grandstand is, by many accounts, a relic.

Portage High School’s FFA and 4-H participants previously utilized the structure for tractor pulls and other events, but it’s since become obsolete, sitting in relative abandonment since the early 1990s.

Under the settled dust of the years, though, Kruse and many others believe the grandstand still has plenty of life left in it.

“I’m almost positive that it’s a good venue to use if they brought it back to life,” she said. “I believe the grandstand is a big part of youth.”

For Kruse in particular, this hits home. Among the many photos set to be displayed at the upcoming fundraiser is one of a teenage girl with bright blonde hair on horseback, an action shot of Kruse herself riding at the grandstand.

This is the type of memory Kruse hopes today’s youth can experience in a newly renovated version of the current grandstand. That mission, however, will be costly.

According to Columbia County Fair Vice President Richard Ziemke, the price of fixing the structure’s various cracks and making it safe for the public is estimated at over $1 million. Ziemke says he, like Kruse, would like to see the grandstand back in use, but not without the proper construction.

“It’s in desperate need of repair,” said Ziemke. The structure is also part of a five-year plan by the city of Portage, which launched in 2021.

“I’d like to keep (the grandstand),” said Ziemke. “It’s been a fixture for the grandstand forever, it would be nice to be able to preserve something like that.”

If and when the necessary repairs are made, Kruse says she’d like to see the grandstand come back to life the way it once was, with sports, FFA and 4-H events, and music among other things filling the seats with visitors.

For now, though, she and other Save the Grandstand members are doing what they can to raise money toward that goal.

What: Save the Grandstand fundraiser

A woman was arrested last week with cocaine and heroin in her vehicle following a traffic stop for a malfunctioning brake light.

An arrest warrant has been issued for a Racine man after he allegedly fled a traffic stop in Columbus. After the driver fled, a passenger jump…

For 30 years, Terry Pease’s official title was kindergarten through eighth grade principal. But many say Pease went above and beyond throughout his three decades of service to the district.

A Columbia County judge denied a summary judgement in the civil lawsuit filed against a Portage doctor by Divine Savior Healthcare earlier this year.

A Baraboo woman and her grandmother allegedly sent paper soaked in methamphetamine to an inmate at the Columbia County Jail, according to cour…

Woman charged with possession with intent to distribute cocaine

There were small plastic bags in the purse with a substance that tested positive for the presence of cocaine.

From a three-sport student athlete in Columbia County to a leading man in Bat Out of Hell, Mitch Gray says his career has taken him to new heights.

The Portage graduate currently calls Las Vegas home, where he’s starring as “Hoffman” in “Bat Out of Hell,” as well as sharing the lead role of “Strat” in two out of eight shows per week.

Then-teenager Nancy Kruse rides her horse at the Columbia County grandstand. Horseback riding was one of many activities that took place at the grandstand, along with sports and concerts.

The first annual Save the Grandstand Arts & Crafts Festival held at the Columbia County Fairgrounds in 2021 featured over 80 vendors and live music.