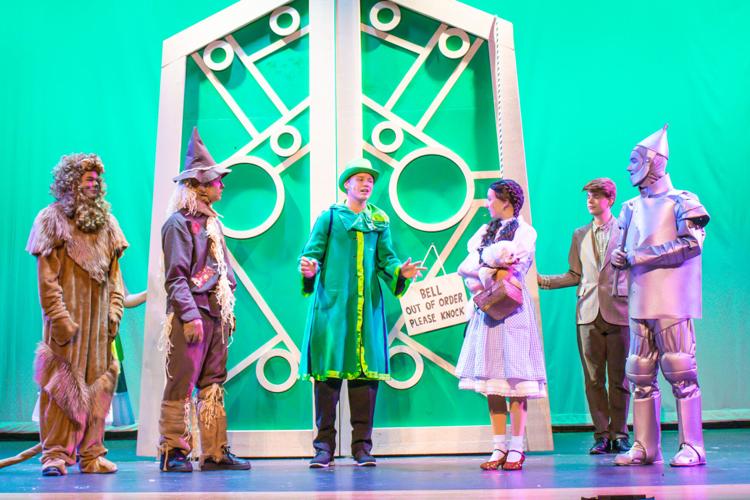 Before the gates of Emerald City, Dorothy (played by Kaitlyn Meier), Toto (Sophie), and their various new friends are greeted by the gatekeeper.

The full cast of "The Wizard of Oz," from munchkins to stage crew, sit together onstage for a photo.  According to John Schilling, who plays the Cowardly Lion, the production team has become very close over the past 11 weeks of rehearsals.

Toto and Dorothy may not be in Kansas anymore, but they’ve been taking the stage at Lodi High School’s Performing Arts Center in recent weeks.

Lodi’s production of the “The Wizard of Oz” premiered last weekend to record-breaking crowds of more than 1,000 audience members over the course of Friday and Saturday’s performances.

“Even out in the community I’ve been told a handful of times how excited people are to come out and see the show, how they see it every year,” said John Schilling, resident Cowardly Lion. “This community is really behind the theater program here and it’s really cool to see.”

While seats were full for the production’s first weekend, the backstage area had been just as full for weeks ahead of opening night. A troupe of volunteer dads spent five weekends building the set, while volunteer moms frequented rehearsals, making sure everyone was fed and hydrated.

That work was no small task either, she added. By numbers, the show features 18 set pieces, and 12 special effects. Painting the yellow brick road backdrop took 80 hours, and the lighting effects took 200 hours.

Much of the special effects portion is the lighting. Creating the illusion of a sepia-to-color picture on a live stage comes with its challenges.

“There’s a lot of technical things in the movie, like switching from black and white to color,” said Erik Dochel, better known onstage as Tin Man. “Things like that are kind of hard to produce in real life.”

Between the show’s 89 cast and crew members, though, they’ve been able to make things work. Twenty of those 89 are seniors this year, for whom Oz kicked off their final trip down their own yellow brick road: the hallways of Lodi High.

For Bardwell, it’s going to be a difficult goodbye.

“My favorite part about being a director is watching them grow,” she said. “It’s so, so cool to see what they did our first read-through or our first time when they came out onstage and I said ‘OK, act like this or do this,’ and then seeing what they do when they get to the end of the process and in front of an audience, there is no better feeling.”

In contrast to the production’s senior population, 17 first-graders sing and dance around them onstage, for what would Munchkinland be without its munchkins?

As the show’s Dorothy, Kaitlyn Meier gets to interact directly with the littlest of the cast members, and she says that much like the barrage of special effects and lighting tricks, they bring the show to life.

“They all come out in their little costumes and they sing their little hearts out and they are adorable,” she said. “They make everyone smile.”

As for Toto, the canine filling that role, while reportedly very soft and little, has given the production its fair share of problems.

Meier says the dog, whose real name is Sophie, was initially responsive to the treats she was given for running out on stage, laying down when she was supposed to. Now, however, Sophie has come to expect the treats, making it somewhat of a challenge to get her to perform.

Doggy difficulties aside, Bardwell says she’s proud of the show she selected, and of the students and community members helping to make it a reality. After so much time lost to COVID-19 — a year of theater performances canceled — and returning last year with “High School Musical,” Bardwell says she wanted this year’s fall musical to be something special.

“I wanted to do a big name, happy feeling, happy-go-lucky story in this space,” she said. “I wanted a really crowd-pleasing big show.”

Tickets are still available for the Nov. 18 and Nov. 19 performances and can be purchased on the show’s ticket website, https://www.showtix4u.com/event-details/68023.

A West Allis man charged with killing a Columbia County man over three years ago has reached a plea deal with prosecutors days before his trial was set to begin.

Pardeeville man charged with possession with intent to deliver methamphetamine

During a traffic stop of a driver for an expired registration, a Columbia County Sheriff’s Deputy allegedly found almost 30 grams of methamphe…

The Portage City Council passed the 2023 budget that highlights the rise in assessed value across the city and increases to first responders.

Two large solar projects in Columbia County are of concern to residents who have a lot of questions they want answered, including how the proj…

Portage Caring Tree program takes a community to be successful

The 32nd year of the Caring Tree program is underway at banks across the town, notecards dangling off each decorated branch listing the ages and Christmas gift wishes of local children in need.

Portage mayor apologizes to city staff for his behavior

Before the gates of Emerald City, Dorothy (played by Kaitlyn Meier), Toto (Sophie), and their various new friends are greeted by the gatekeeper.

The full cast of "The Wizard of Oz," from munchkins to stage crew, sit together onstage for a photo.  According to John Schilling, who plays the Cowardly Lion, the production team has become very close over the past 11 weeks of rehearsals.