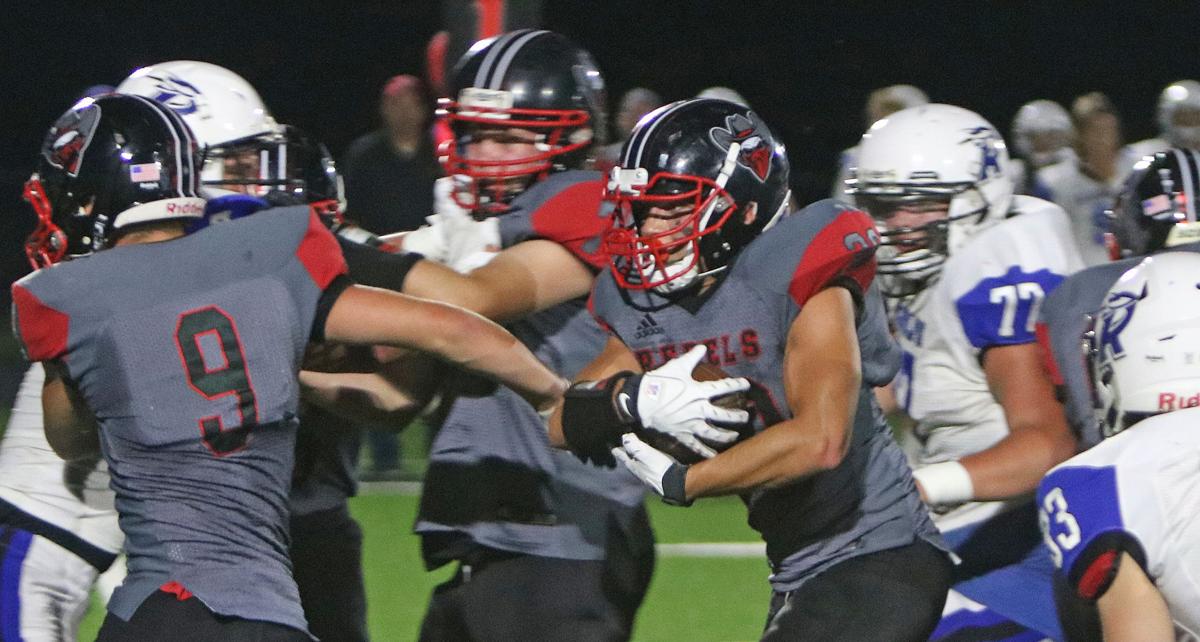 Fall River/Rio's Colten Pergande (30) weaves his way through traffic as he makes his way up the left hash for a 27-yard touchdown run to give the Rebels a 6-0 lead over Randolph during the first half of last Friday's Trailways Conference game. 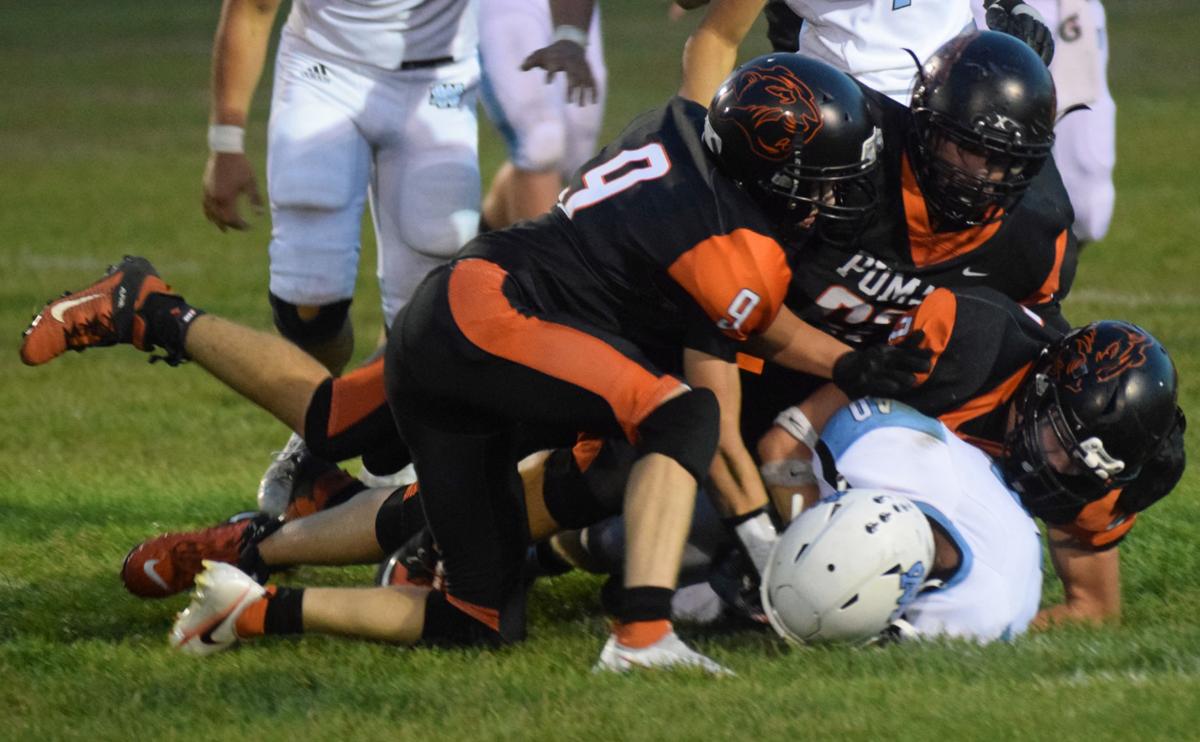 A host of Poynette players converge on Wisconsin Dells' Matt Getgen during last Friday's South Central Conference game. The Pumas will look to claw their way back into the win column this week as they meet former, and current, SCC rival Westfield.

Week 5 signals the official midway point of the prep football season, and so far there have been some great — and not so great — starts to the season.

Portage posted its first 3-0 start since 2007, and despite losing last week, the Warriors have been one of the most impressive teams in the area so far. Meanwhile, nothing seems to have changed for Lodi as it has turned in another unbeaten run to open the campaign.

Pardeeville enters the halfway point above .500 while other area teams have had their fair share of positives, although they haven’t fully bore themselves out in the old record book.

With that being said, there’s plenty of time for those programs to turn around their misfortune and spark a push for the postseason.

This week seems like as good a time as any to start.

Following a red hot start, Portage got cooled off last week as it suffered its first defeat of the season with a 29-26 loss to Mt. Horeb/Barneveld.

The Warriors have little time to recharge this week, with their crucial Badger Small Conference clash against Fort Atkinson moved up to Thursday due to the state-wide officials shortage.

The Blackhawks (3-1, 2-0 Badger Small) have been another surprise throughout the conference so far this season. Last making the playoffs since 2016 and coming off a 2-1 spring season, Fort Atkinson has been on a roll so far this fall, rattling off three straight wins following a season-opening 29-0 loss to Milton.

A balanced ground attack has powered coach Nick Nelson’s squad, especially in last week’s 35-6 win over Sauk Prairie. The Blackhawks were without a 100-yard rusher, but had nine players record carries as they racked up 288 yards on 48 touches.

Senior Alex Courtier has been the focal point of the rushing attack with 276 yards and five scores through four games, including 85 yards and a pair of TDs against the Eagles last week. It will pose another tall task for the Warriors defense that did its best against the Vikings, allowing 277 yards and four scores in the three-point defeat.

A solid ground game has been Portage’s forte, but the Warriors found plenty of success through the air against Mt. Horeb/Barneveld. Junior Gavin Thompson threw for 296 yards, three scores and an interception on 20-of-33 passing for the Warriors.

Thompson connected with seven separate targets and tossed two TD passes in the final two-plus minutes as the Warriors’ late rally against the Vikings fell short. The aerial assault could be key to cracking the Blackhawks this week.

As most coaches say “Games are won and lost in the trenches.”

It’s shaping up that Friday’s Eastern Suburban Conference clash between Pardeeville and Clinton will be waged there as the pair of 1-1 league teams enter sporting punishing ground games.

Following a nail-biting Week 3 loss to Marshall, Pardeeville got back into the win column in emphatic fashion last Friday as the Bulldogs bulldozed their way to a 50-6 win over Palmyra-Eagle. Pardeeville (2-1, 1-1 Eastern Suburban) lorded over the Panthers on the ground, rushing for 362 yards and five touchdowns on the ground on 45 carries.

Similarly, Clinton has hounded opponents on the ground through four games to the tune of 1,082 yards and 10 scores. The Cougars (3-1, 1-1) were heavily kept in check against Marshall last week, rushing for a season-low 192 yards and just one score on 34 carries.

Abel Espinoza had 83 yards and the lone score in the Cougars’ 28-6 loss, but has a team-high 383 yards and five scores so far this season. He won’t be the only one the Dawgs will have to contend with however, as Clinton sports two more rushers with over 200 yards in Peyton Bingham (293 yards, 4 TDs) and Caleb Schoonover (203).

Lodi surrendered its first points and trailed for the first time all season last week against Walworth Big Foot. The Chiefs scored first, but the Blue Devils locked down the final 38-plus minutes in a 38-6 victory.

Even coming off a lopsided win, Lodi must be sure to not let momentum slip this week in its toughest test to date in a hungry Beloit Turner squad. The Trojans started the season strong with a pair of non-conference wins but got off to a rough start in their debut season in the Capitol Conference.

After falling to Watertown Luther Prep, 34-8, in Week 3, Turner (2-2) dropped a heart-breaking 32-31 overtime tilt to Lakeside Lutheran last week in the Trojans home opener. Turner boasts an incredibly balanced offensive attack as the Trojans have thrown for 693 yards and a pair of scores, while rushing for 582 yards and nine TDs.

Quarterback Sean Fogel leads the Capitol in passing with 662 yards with six TDs and just one interception, but he hasn’t been the most efficient completing just 35-of-77 passes. What Fogel does have going for him however is a deep receiving corps with four players with at least 100 yards receiving, including leading rushers Camden Combs (298 yards, 4 TDs) and Conner Hughes (223-5).

The Blue Devils (4-0, 2-0) have plenty of weapons of their own however, including the emerging Jaylen Montgomery. The senior has taken over as the Blue Devils’ bell cow back after the injury to senior Lucas Heyroth, piling up 458 yards and five scores through three games.

Montgomery was on full display last week against the Chiefs, rushing for 182 yards and a pair of scores on 26 carries. What may be most impressive is Montgomery’s ability to churn out yards as he’s averaging 6.9 yards per attempt.

The addition of Poynette to the South Central Conference creates plenty of old rivalry match-ups for the Pumas, who currently compete in the Capitol North outside of football.

The latest chapter of Poynette’s return to the SCC gets underway this week as the Pumas will head to Westfield in a clash of two teams looking to get off the schneid in league play.

It’s been a tough road for both sides following season-opening wins over Palmyra-Eagle and Howards Grove, respectively, for the Pioneers and Pumas. Westfield had no match for Wautoma last week in a 50-12 loss to the Hornets, their third straight.

The Pioneers (1-3, 0-2 South Central) couldn’t stop the Wautoma offense, in particular quarterback Sam Weiss as he completed 10-of-11 passes for 278 yards and three scores for a perfect 158.3 passer rating. Weiss also rushed for three scores and 144 yards on nine carries.

Still, there were positives for the Pioneers to draw from as quarterback Kashton Kangas threw for 152 y yards on 12-of-16 passing, and Hunter Goodwin rushed for 103 yards on 19 carries.

The Pumas (1-2, 0-2) meanwhile struggled to get over the hump in a 36-7 loss to Wisconsin Dells, as Poynette failed to score until midway through the fourth quarter following a series of possessions fell flat. The one bright side for the Pumas was their ground game as they rushed for 213 yards on 45 carries, with Dylan Elsing (11 carries, 71 yards) and Jimmy Heath (18-62) leading a balanced attack.

Something will have to give this week, and with it could be the loser’s playoff chances.

Other area games to watch

The diminutive three-sport athlete picked up field goal kicking this summer to help bolster the team's roster and ensure her teammates can have a final campaign.

Fall River/Rio's Colten Pergande (30) weaves his way through traffic as he makes his way up the left hash for a 27-yard touchdown run to give the Rebels a 6-0 lead over Randolph during the first half of last Friday's Trailways Conference game.

A host of Poynette players converge on Wisconsin Dells' Matt Getgen during last Friday's South Central Conference game. The Pumas will look to claw their way back into the win column this week as they meet former, and current, SCC rival Westfield.