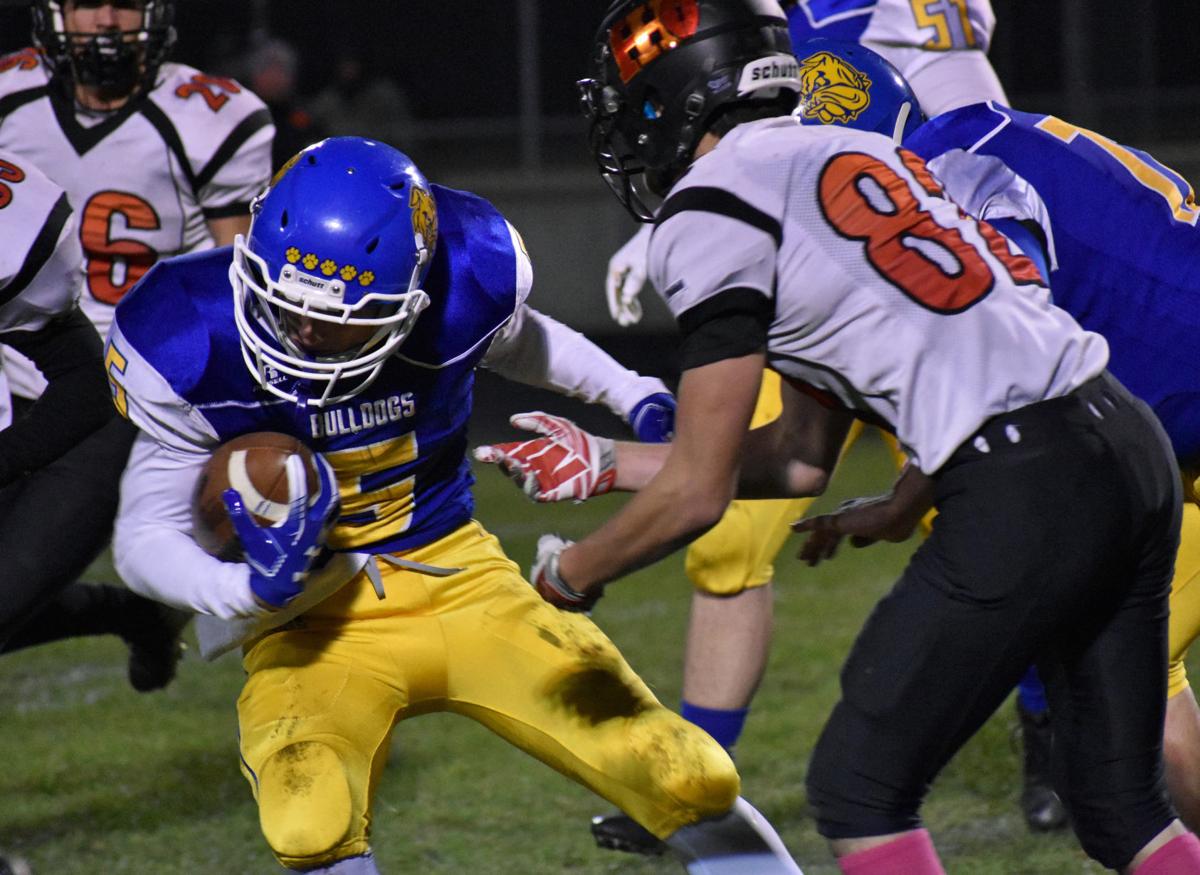 Pardeeville sophomore running back Derek Lindert fights for extra yards while Horicon/Hustisford senior defensive back Hunter Augistine (82) tries to bring him down on a first-half run in Pardeeville on Oct. 11. 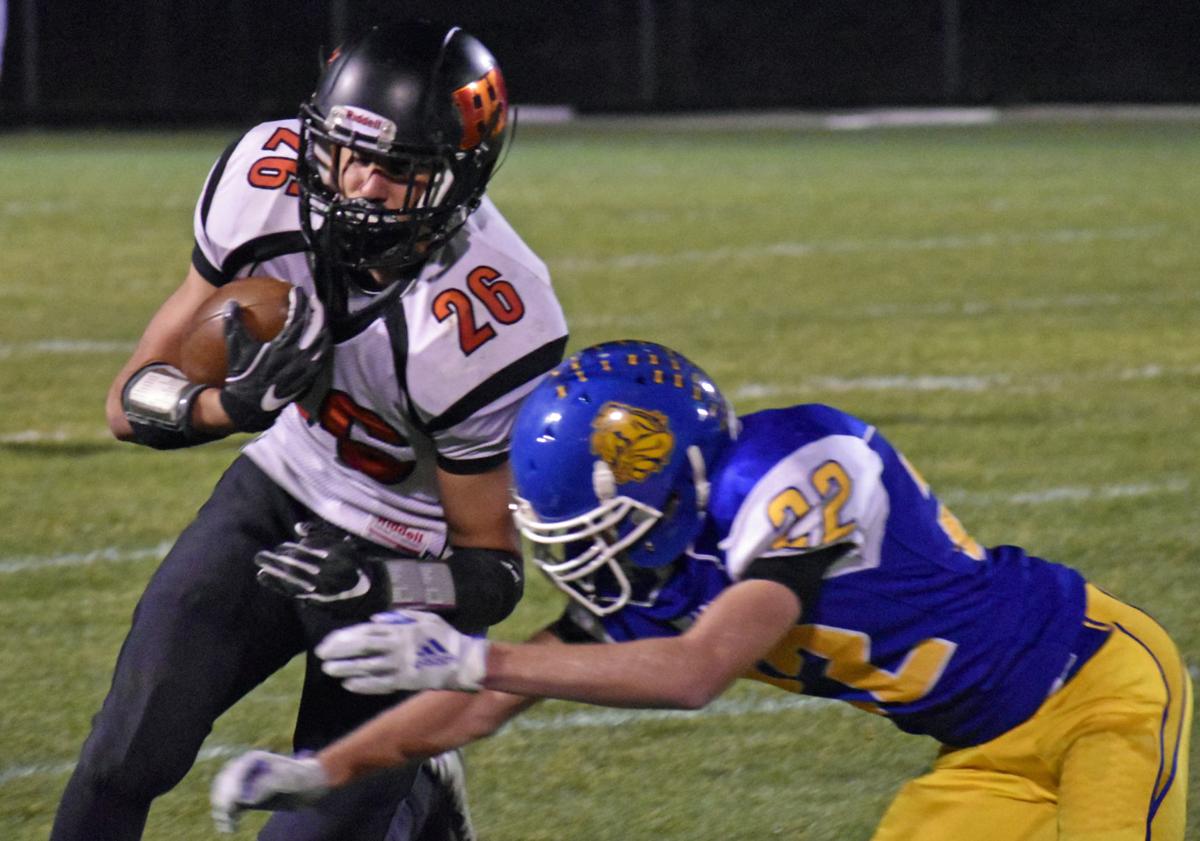 Horicon/Hustisford senior Zach Kehl is hit by Pardeeville junior Tyler Schommer during the first half in Pardeeville on Friday. 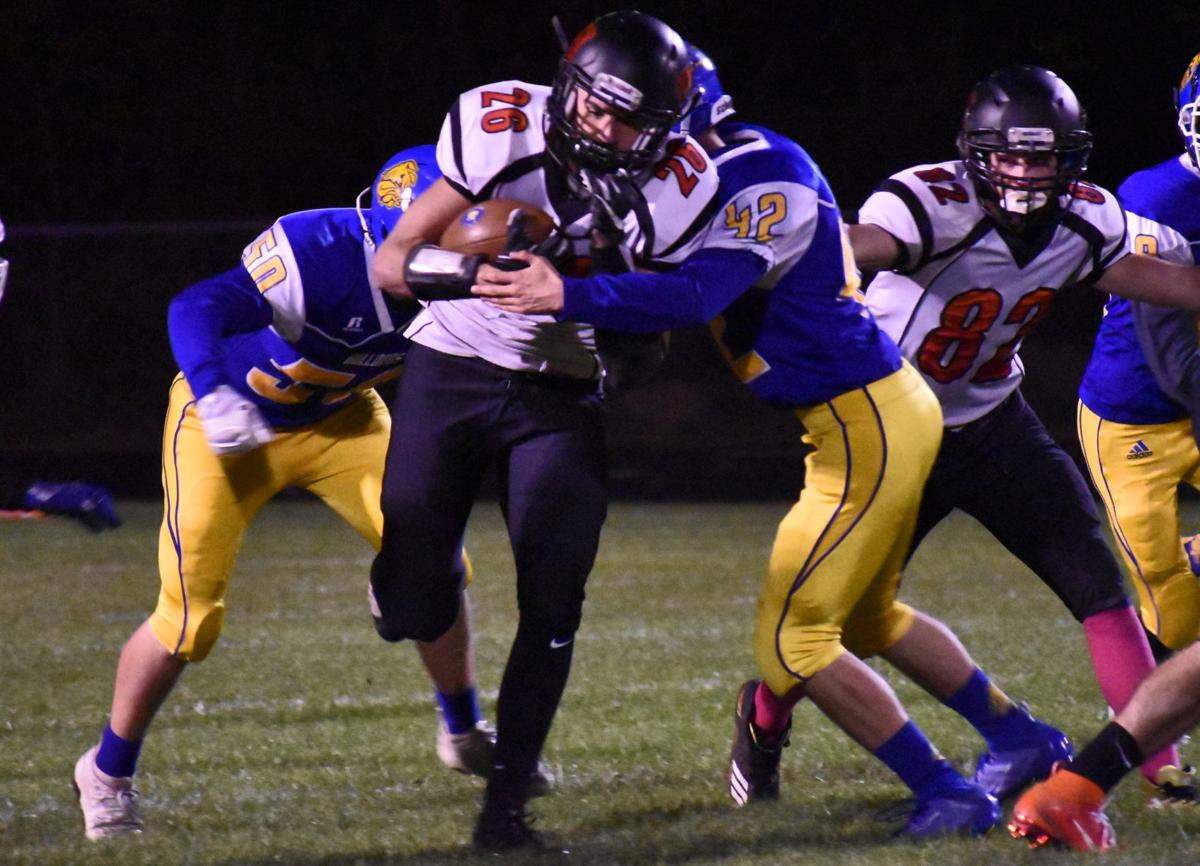 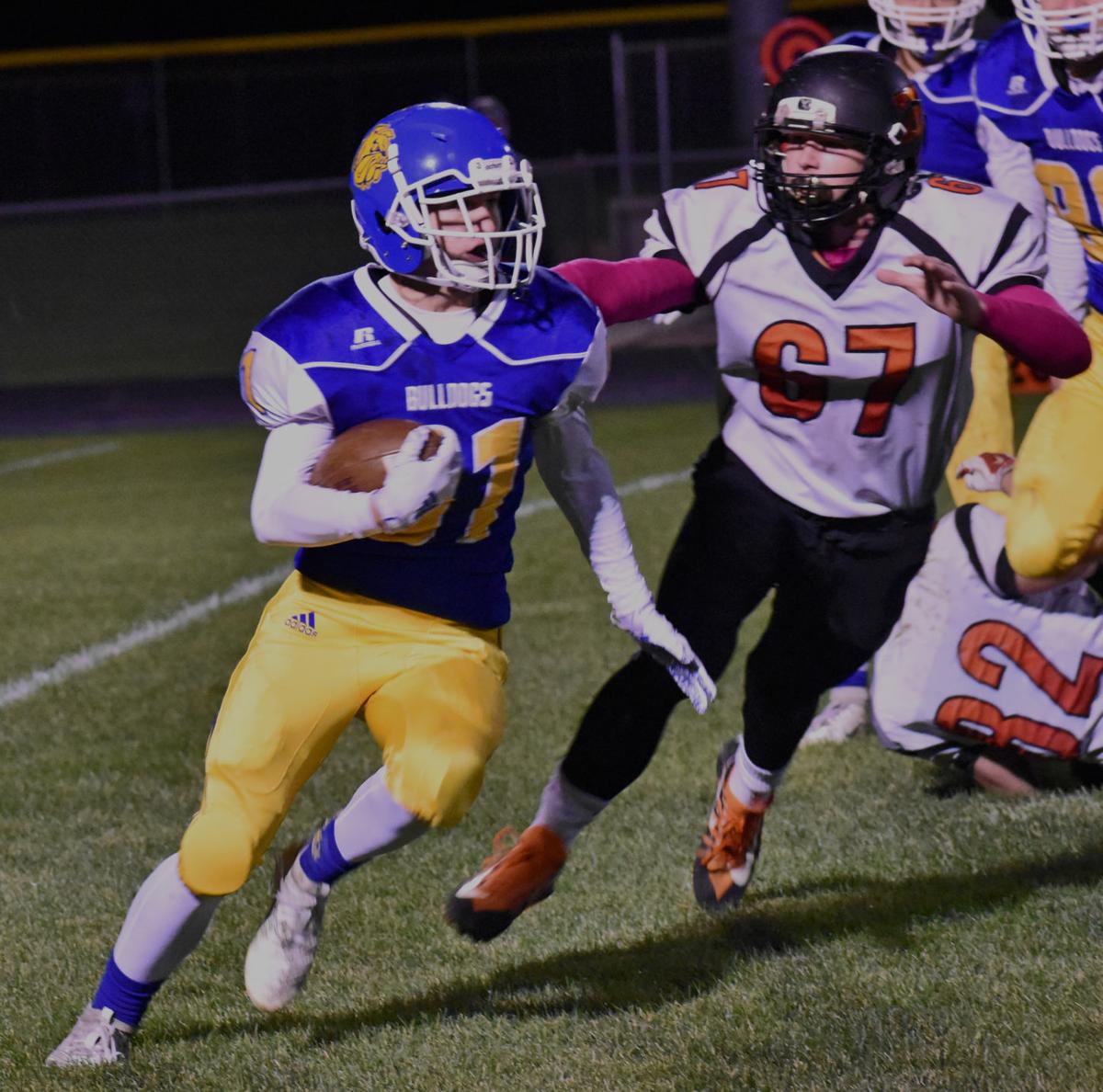 Pardeeville junior Ty Westbury runs away from Horicon/Hustisford senior Dakota Reinwald in the first half in Pardeeville on Friday.

PARDEEVILLE — With the Trailways Large Conference championship in site, Horicon/Hustisford senior quarterback Dylan Schmitt made sure the MarshFalcons weren’t going to hit any road bumps against Pardeeville.

Schmitt, the reigning offensive player of the year in the conference, rushed for 197 yards and three touchdowns, and threw for two more scores to lead Horicon/Hustisford to a 38-0 victory over the host Bulldogs on Friday night at Bob Bostad Field. The victory guaranteed the MarshFalcons at least a share of the league title.

It didn’t take long for Schmitt to make a big impact. On the very first play from scrimmage, Schmitt kept the ball on a quarterback draw and shot upfield for a 60-yard touchdown run to give Horicon/Hustisford (7-1, 5-0 Trailways Large) a 6-0 lead with just 20 seconds ticked off the clock.

“It was what we needed to do. We want to start fast,” Horicon/Hustisford coach Shannon Mueller said. “We usually get out to slower starts. The last couple weeks, we’ve devoted time in practice to go right off the bat, get out and score fast. It set the tone of what we wanted to do the rest of the game.”

“We ran that play at practice a hundred times and (Schmitt) just said ‘This is why I’m great,’ and he ran it for 60 yards and scored,” Johnson said. “And we kind of lost our confidence. That’s a tough way to start the game.”

Pardeeville (4-4, 3-2) put together some promising drives in the first half, but wasn’t able to cash in. On their second possession of the game, the Bulldogs drove into Horicon/Hustisford territory, only to fumble the ball away to the MarshFalcons at their own 29-yard line. It was the first of three turnovers by Pardeeville.

Horicon/Hustisford converted the turnover into points, going 71 yards for their second touchdown. A 5-yard pass on fourth-and-4 to junior Dylan Kehl kept the drive moving, setting up a 3-yard TD run by Schmitt. The two-point conversion pass from Schmitt to Kehl made it 14-0 with 11:10 left in the first half.

Pardeeville again had good field position after an 8-yard punt by Horicon/Hustisford, but again couldn’t do anything with it, turning the ball over on downs at the MarshFalcons’ 15-yard line with 1:17 left in the first half.

Schmitt’s offensive fireworks continued in the second half. On Horicon/Hustisford’s first possession of the half, Schmitt appeared to be corralled in the backfield, but the elusive QB made a couple tacklers miss, and then bolted up the right sideline for a 41-yard touchdown run that gave the MarshFalcons a 20-0 lead with 6:49 left in the third quarter.

It was an impressive run by Schmitt.

“He is a great athlete. If you don’t run through him, he’s going to make you miss. And when you try to run through him, he makes you miss,” Johnson said. “He’s shifty. We thought we had a plan for him. We got a couple guys dinged up that we would have liked to have played the whole game, but we just couldn’t.”

Schmitt used his arm to account for Horicon/Hustisford’s fourth score of the game. This time, he threw a high-arcing pass into the end zone, where the 6-foot-6 Kuehl outjumped a pair of Pardeeville defenders for a 24-yard touchdown reception. Schmitt ran in the two-point conversion to make it 28-0 with 35 seconds left in the third quarter.

Schmitt’s second passing touchdown was a 5-yard toss to senior Zach Kehl with 7:04 left in the game, and was followed by a successful extra-point kick by sophomore Nathan Spoerl that made it 35-0.

Pardeeville’s third lost fumble came on the first play of the next possession, and set up a 32-yard field goal by Spoerl that made it 38-0.

One highlight for Pardeeville was sophomore running back Derek Lindert, who cleared 1,000 yards rushing for the season after running for 136 yards Friday night.

Mueller said his defense wanted to make a statement against the Bulldogs.

“Going into this week, Pardeeville has given up the least amount of points in conference this year. They had given up less than us,” Mueller said. “That was one of our goals. We wanted to be the best defense coming out of this week.”

Horicon/Hustisford can win the conference title outright next week with a win at home over Dodgeland. Pardeeville’s conference title hopes were dashed with Friday’s loss, but the Bulldogs still have plenty to play for at Markesan in next week’s season finale.

“We need to get another win to help us with seeding, but Markesan is a tough opponent. They are a good squad. They’re coached well. They got a lot of kids that run to the ball, and they just kind of do their thing,” Johnson said. “We know we need another (win) to give ourselves a little bit better chance.”

PREP FOOTBALL WEEK 9 PREVIEW: Playoff spot on the line between Cambria-Friesland and Randolph

The Hilltoppers and Rockets square off in a must-win game to reach the postseason.

1. Thrice as nice for Golden Beavers

Pardeeville sophomore running back Derek Lindert fights for extra yards while Horicon/Hustisford senior defensive back Hunter Augistine (82) tries to bring him down on a first-half run in Pardeeville on Oct. 11.

Horicon/Hustisford senior Zach Kehl is hit by Pardeeville junior Tyler Schommer during the first half in Pardeeville on Friday.

Pardeeville junior Ty Westbury runs away from Horicon/Hustisford senior Dakota Reinwald in the first half in Pardeeville on Friday.