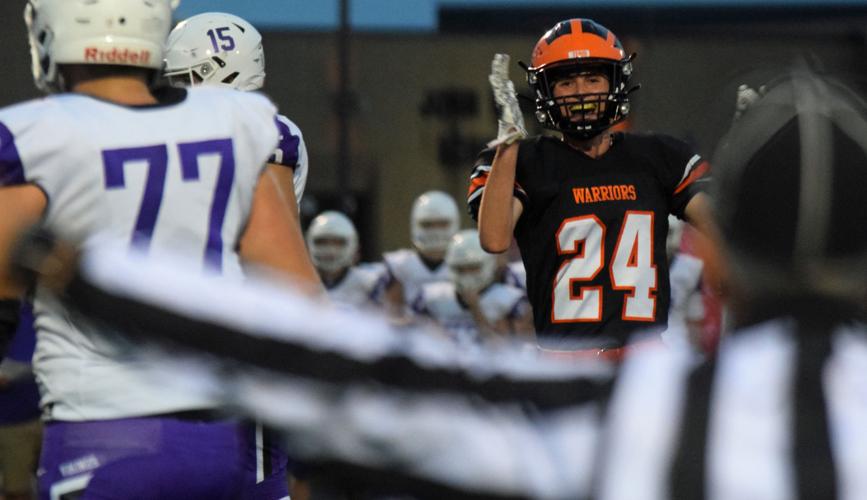 Portage junior Ian Karpelenia celebrates after recovering a fumble during their 22-20 win over Stoughton last week. The Warriors head to Mt. Horeb/Barneveld on Friday for a clash of unbeaten teams. 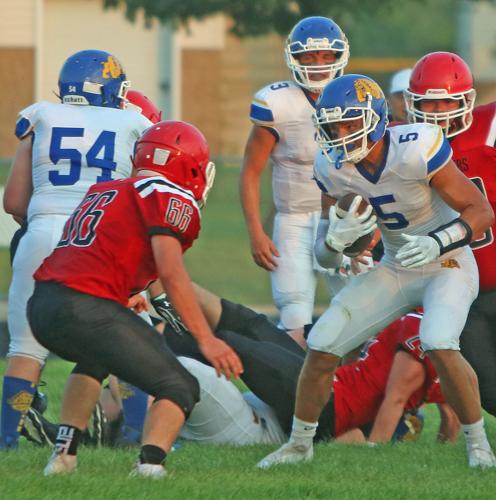 Pardeeville's Derek Lindert (5) tries to juke Cambria-Friesland's Carter Drews (66) during the teams' season-opening non-conference game on Aug. 20. Lindert and the Bulldogs will look to build off last week's 22-16 loss to Marshall against Palmyra-Eagle this Friday. Meanwhile, the Hilltoppers head to Oshkosh Lourdes eyeing a third straight win.

With the first three weeks of the prep football season in the books, teams officially turn the page to the middle third of the 2021 campaign.

While there’s still plenty of season left to unfold, some teams have established themselves in the early running of conference title races. Portage is off to its first 3-0 start since 2007 while Lodi is also unbeaten at 3-0 and continues to be a contender in the Capitol Conference.

Meanwhile, Pardeeville suffered its first loss but showed it can compete in a wide-open Eastern Suburban. The intrigue of conference games will only increase the rest of the season, starting with Friday’s second set of league tilts.

Here are the area’s top games to watch this week:

Defense hasn’t traditionally been Portage’s strong suit, especially stopping the run; however, the Warriors have certainly flipped the script so far this season.

Portage has allowed a combined 131 yards rushing through the first three games of the season, with Stoughton’s 112 during last week’s 22-20 victory carrying most of the load. The Warriors’ defense will have its work cut out for it this week when they head to fellow unbeaten Mt. Horeb/Barneveld, which has flexed its muscles on the ground through three weeks.

The Vikings have piled up 689 yards and 11 touchdowns on the ground so far this season, good for an average of 229.7 yards per game. The bell cow back has been Tyler Buechner, as the 5-foot-8, 170-pound junior has bruised his way for 330 yards and six scores on 55 carries, good for 6 yards per attempt.

Buechner rattled off 64 yards and a score in the Vikings’ 33-0 shutout win over Sauk Prairie last week, but made his presence known in Week 1, rushing for 228 yards and three TDs on 21 carries in Mt. Horeb/Barneveld’s 37-30 upset win over Racine St. Catherine’s.

Trenton Owens (33 carries, 212 yards, 4 TDs) has provided a steady second option for coach Bret St. Arnauld’s group, while quarterback Kolton Schaller has added a nice complement through the air. The 6-2, 190-pound senior signal caller has completed 32-of-62 passes for 427 yards, two scores and an interception.

The lanky righty has rarely been touched so far this season, so creating defensive pressure will be crucial. Despite a size disadvantage last week against Stoughton, the Warriors were able to disrupt Vikings quarterback Isaac Knutson with a pair of late sacks to force turnovers on downs and could make life difficult on Schaller.

Despite the loss, the Bulldogs should be feeling pretty good about themselves entering this Friday’s ESC clash with Palmyra-Eagle. Pardeeville took a 16-14 lead late in the third quarter and nearly held off the Cardinals, but were done in by a Craig Ward 32-yard touchdown pass to Bryce Frank with just 2:20 left to play.

While they struggled to fully halt Ward, who racked up 281 yards and all three Marshall scores on 12-of-22 passing, the Bulldogs thrived on the ground. Pardeeville (1-1) held Marshall to just 45 yards rushing, including limiting reigning league Offensive Player of the Year Bryce Frank to just 30 yards on 11 carries.

Meanwhile, Derek Lindert (21 carries, 115 yards) and Hayden Guenther (16-83), each rushed for a touchdown and the Bulldogs had 238 rushing yards on 49 carries. That’s especially encouraging looking ahead to the Panthers, who have been porous stopping the run.

Palmyra-Eagle (0-3, 0-1) has allowed opposing teams to rack up 769 rushing yards and 14 touchdowns through three games this season, including 285 yards and four scores in last week’s 40-8 loss to Cambridge. The Panthers’ opponents are averaging 256.3 rushing yards per game and 7.2 yards per attempt.

Similar to the Cardinals, the Panthers’ offense is paced through the air by quarterback Chance Scheel, who has thrown for 438 yards with two TDs and three interceptions on 45-of-81 passing this season. The loss to Marshall should be the perfect appetizer for the Bulldogs to lock down Scheel this week.

Turnovers and a two-headed running attack were too much for Poynette to overcome last week, and another run-heavy attack is in store for the Pumas again Friday when they host Wisconsin Dells in a South Central Conference home opener.

The Pumas (1-1, 0-1) were unable to rally out of a three-point halftime hole last Friday against Prairie du Chien, suffering a 30-13 loss. Poynette did get a strong rushing performance from quarterback Jimmy Heath as he piled up 129 yards and a score on 20 carries; however, Heath completed just 1-of-14 passing attempts for 11 yards and was picked off twice.

The Blackhawks only accounted for 217 total yards, but rode the tandem of Rhett Koenig (19 carries, 78 yards) and Ty Wagner (14-76, 2 TDs), as well as three interceptions to cage the Pumas.

Poynette will have an even bigger rushing threat to deal with Friday against the Chiefs and Matt Getgen. The senior running back has been on an absolute tear so far this season with 539 yards and 10 touchdowns through two games, including a 189-yard, four-score performance in last week’s 41-6 win over Wautoma.

Alongside Getgen, the Chiefs got 74 yards and a pair of scores from Lewis Waterman, while Jacob Rockwell added 82 yards on five carries, providing the Chiefs (3-0, 1-0) with plenty of options to pick apart the Pumas’ defense.

Rival Rockets, Rebels tee it up

While they may not be as tense as in Week 9, rivalry match-ups early in the season are still incredibly nerve-racking.

In fact, it wouldn’t be much of a stretch to say that Friday night’s clash between Randolph and Fall River/Rio could be season-altering, as the schools separated by just 12.5 miles meet trending in different directions.

Following a pair of losses to open the season, including a 6-0 nail-biter to Royall in Week 2, the Rebels burst into the win column in impressive fashion last week with a 62-20 win over Deerfield. Meanwhile, the Rockets suffered a second straight loss against Oshkosh Lourdes with a late touchdown sinking Randolph in an agonizing 12-7 defeat.

The pair of drastically different results last week certainly puts a brighter spotlight on this Friday’s affair. The Rebels enter the tilt with plenty of momentum after their convincing 42-point victory over the Demons.

A resounding ground attack and ball-hawking defensive performance bolstered Fall River/Rio, which chewed up 485 yards and nine touchdowns on the ground and picked off Deerfield quarterback Tommy Lees five times. Clay Blevins shined on both sides as he rushed for a team-high 143 yards and three scores while adding two interceptions on defense.

The Rockets, meanwhile, had a hard time hanging onto the ball against the Red Knights, as quarterback Nate Kok tossed three interceptions and was sacked three times. The Rockets, however, got a monster performance from senior Travis Alvin, who had 28 tackles, including 10 solo, and one of the team’s three sacks.

Traiton Lininger rushed for 137 yards on 25 carries, but the rest of the Rockets combined for just 33 yards on 18 touches.

The Chiefs throttled Wautoma, 41-6, while the Golden Eagles cruised past Westfield by a nearly identical 44-6 romp.

The Cardinals pitched their first shutout of the season on the Panthers to stay unbeaten. The Rockets couldn't hold off Onalaska Luther, while the Silver Wolves struggled against North Crawford.

The Chiefs executed on the ground and through the air, while nearly pitching a shutout over the Pumas to move to 4-0 for the first time since 2008.

Portage junior Ian Karpelenia celebrates after recovering a fumble during their 22-20 win over Stoughton last week. The Warriors head to Mt. Horeb/Barneveld on Friday for a clash of unbeaten teams.

Pardeeville's Derek Lindert (5) tries to juke Cambria-Friesland's Carter Drews (66) during the teams' season-opening non-conference game on Aug. 20. Lindert and the Bulldogs will look to build off last week's 22-16 loss to Marshall against Palmyra-Eagle this Friday. Meanwhile, the Hilltoppers head to Oshkosh Lourdes eyeing a third straight win.