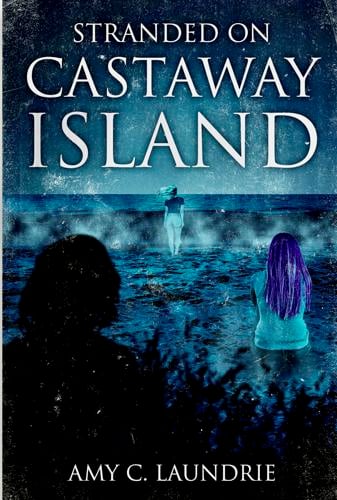 "Stranded on Castaway Island", the 11th book written by Dells author Amy Laundrie, was released in April of 2022. 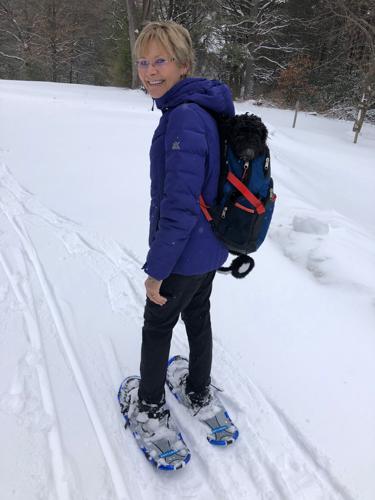 Amy Laundrie's dog Josie stays warm in her backpack while snowshoeing in January of 2022.

A book over 30 years in the making by a Dells author tells a gripping story of survival on a faraway island.

Amy Laundrie, the author of 11 books and a former teacher in the School District of Wisconsin Dells who writes columns for the Wisconsin Dells Events, published “Stranded on Castaway Island” in 2022 after putting together the book over the course of three-plus decades.

A first-person narrative, the book tells the story of two 14-year-old girls stranded on an island near Nova Scotia following a shipwreck.

She was initially inspired by a National Geographic article on 1965 telling the story of a skeleton discovered by a resident on Sable Island in Canada following a wind storm.

“Along with the body, he found some old British coins dated 1760, half a dozen lead musket balls, and a shoe buckle,” said Laundrie in an email. “After that paragraph, my imagination went wild.”

The two girls in “Stranded on Castaway Island”, former best friends Annie and Mirra, also discover a boy’s skeleton on the remote island, which they initially believe is inhabited only by wild horses. They later discover warm embers and abnormal footprints, according to Laundrie’s website. A release announcing the book indicates they also determined a “mysterious figure” is watching them on the island.

“This is one of those books that when you finish reading a page you can’t wait to see what’s on the next one,” said Jerry Apps, a Wisconsin author and rural historian, in the release. “The girls learn how to survive living off the land, but it is not easy. They meet a potential life-threatening disaster at every turn. This is a book about the human spirit and survival under the most difficult of situations. It is a wonderful book, filled with high adventure, and interesting human relationships. No matter what your age, you will enjoy reading it.”

Laundrie incorporated some real life experiences into “Stranded on Castaway Island”, emphasizing her opinion of how important research is for writing such stories. She talked about an incident in which she fell off of a horse and broke her arm in her release and incorporated the same situation for Annie, one of the two girls in the story.

Over the course of the 30-plus years Laundrie spent writing the book, she said in her release that she “received rejection after rejection, but I kept working on it, learning more about the craft from conferences and critique partners.” She also expressed gratitude to publisher Kira Henschel and HenschelHAUS Publishing for helping to get the book published. She also attributed her own persistence and obstinacy for finally releasing it.

Along with her work as an author, Laundrie was a teacher in the School District of Wisconsin Dells for 35 years, most of which she spent as a fourth grade teacher at Lake Delton Elementary School, a job she “loved.” She has been a Dells area resident for 46 years after growing up in Racine and retired from teaching in 2010.

People interested in purchasing "Stranded on Castaway Island" by Dells author Amy Laundrie can find copies at Made With Love in Wisconsin Dells, Reedsburg Office Supplies in Reedsburg, and The Mercantile in Portage, as well as online.

“Stranded on Castaway Island” can be purchased on Amazon, at Barnes and Noble Booksellers or on the bookstore’s website, or the HenschelHAUS Publishing website.

Wisconsin Dells established its Class B License Advisory Committee in December and had its first meeting on Jan. 18. The committee discussed open licenses, criteria for obtaining them, and tabled decisions for its next meeting on Valentine's Day.

Eric Torkelson, the Wisconsin Dells Police Department's school resource officer who has been with the force since 2001, received a Life Saving Award on Jan. 16 for his actions during an incident in Lake Delton in December.

Double Cut Steakhouse, one of the main restaurants at Kalahari Resorts and Conventions, received one of 11 "Distinguished Restaurants of North America" (DiRoNA) awards for 2023.

Next season of 'The White Lotus' in Wisconsin Dells? Visitors bureau says it should be

The bureau tweeted HBO proposing "The White Lotus" comes to the Dells for its third season.

The Baraboo-Dells Airport is set for improvements over the next six years and a contractor was chosen for part of the Kay C. Mackesey Administration Building renovation project.

"Stranded on Castaway Island", the 11th book written by Dells author Amy Laundrie, was released in April of 2022.

Amy Laundrie's dog Josie stays warm in her backpack while snowshoeing in January of 2022.