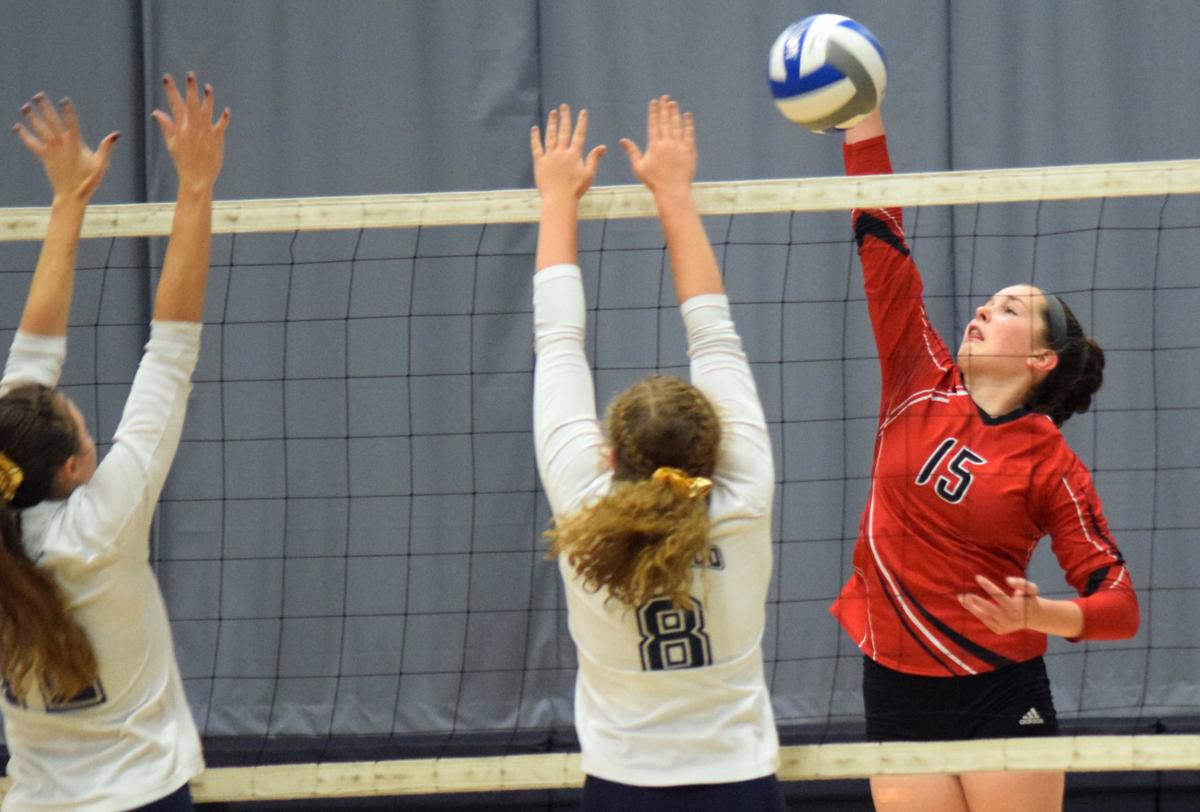 Sauk Prairie junior Olivia Breunig goes for a kill against the block of Baraboo's Emma Crary and Jordan Buelow (8) during a Badger North Conference match on Oct. 10 at Baraboo High School. 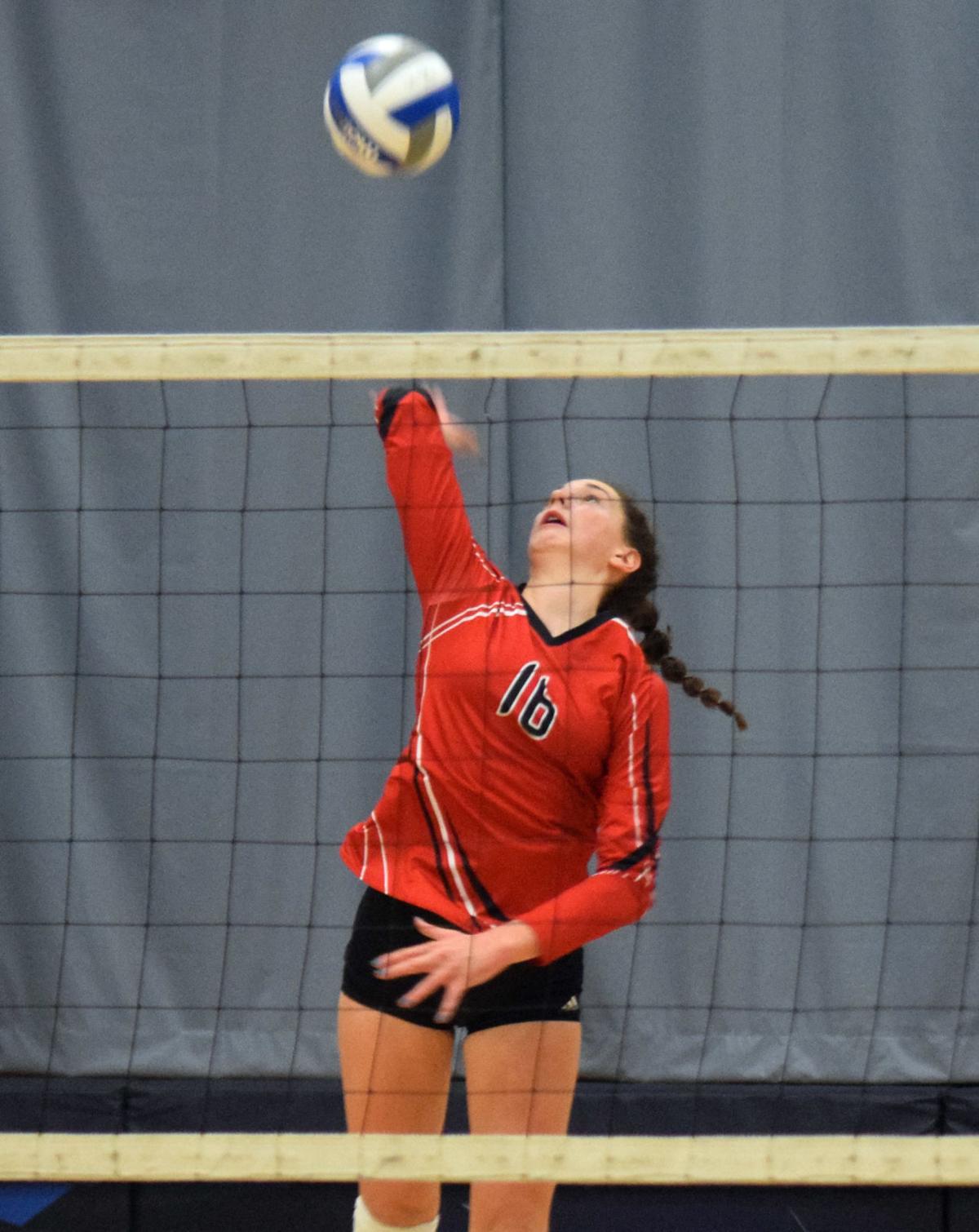 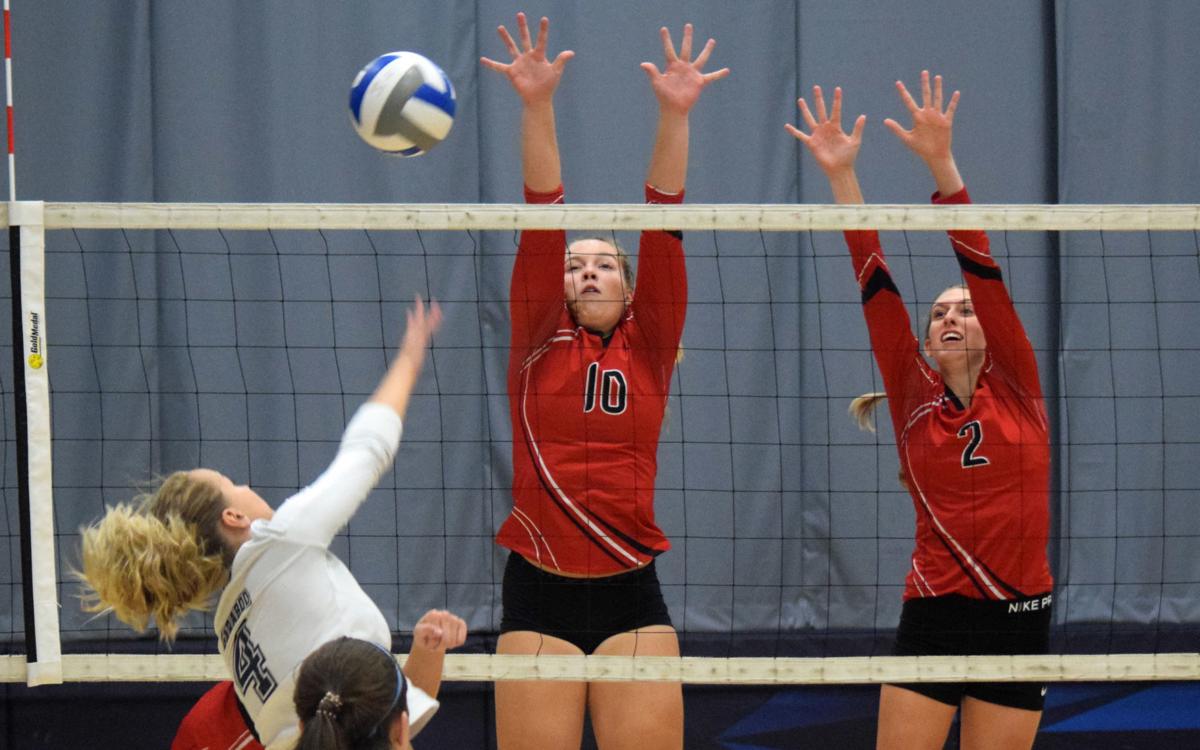 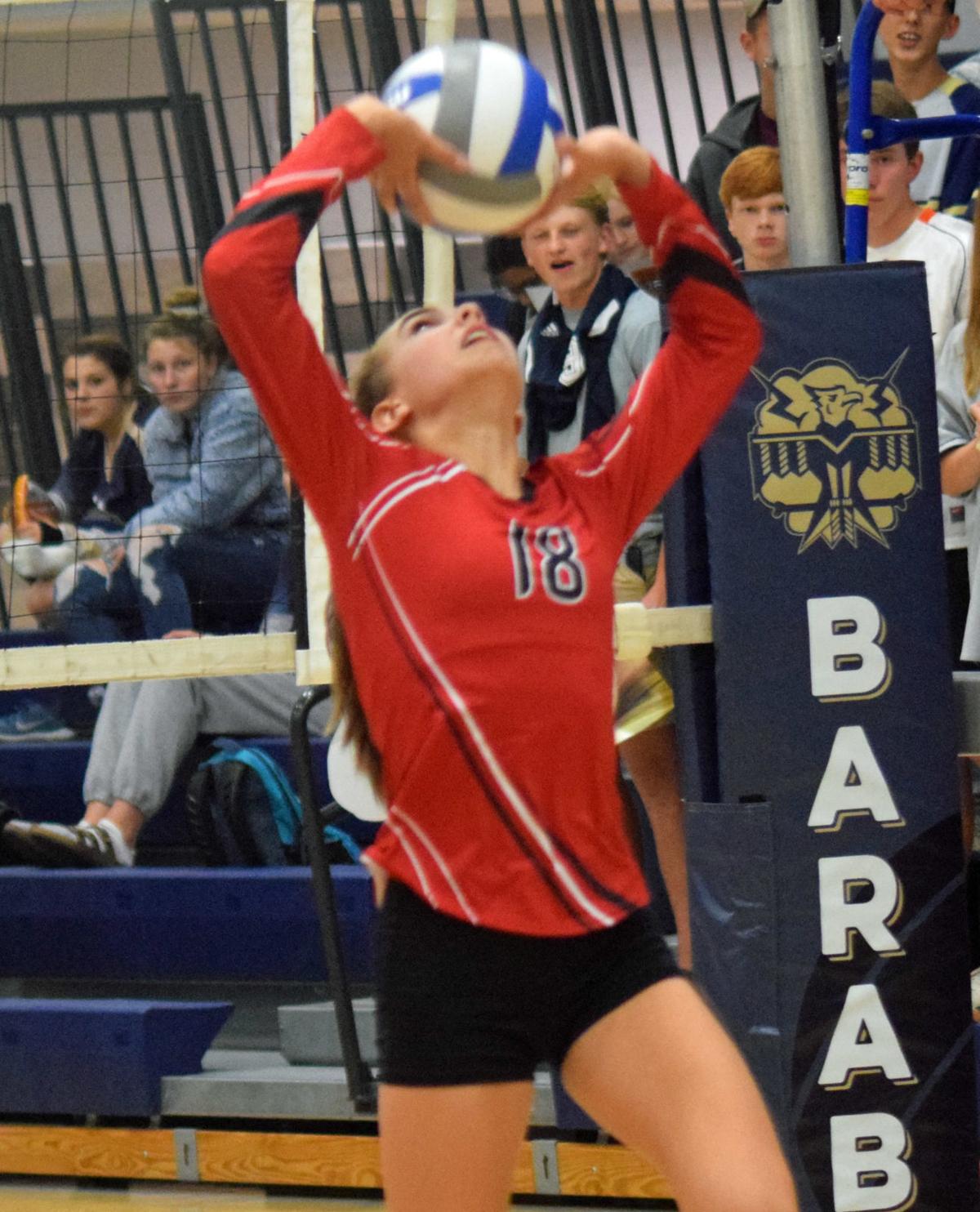 BARABOO — Having dropped its last five Badger North Conference matches, including a pair of five-set thrillers, the Sauk Prairie volleyball team was in need of a pick-me-up.

The Eagles got just that on Thursday earning a 25-15, 25-22, 25-19 sweep over Baraboo in a Badger North Conference finale at Baraboo High School. Sophomore Aida Shadewald tallied a match-high 15 kills and five aces to help the Eagles finish off a second consecutive sweep over the Thunderbirds.

“We really needed it, for sure,” Sauk Prairie coach Amy Schlimgen said. “We’ve played close with the top teams in the conference and it’s always disheartening to lose when you’re playing that hard, so this was important for us to get and doing it in three was nice.”

After cruising to a quick win in the first set, the Eagles (27-11, 2-5 Badger North) got all they could handle from the T-Birds in the second set. Baraboo (11-13, 1-6) traded punches with the Eagles in the early going, with neither team leading by more than a point until a kill by senior Kapriece Tollaksen sparked a 4-0 spurt that put Baraboo on top 16-13.

The momentum didn’t last long as Sauk Prairie answered with a 7-0 run of its own, including two aces by junior Olivia Breunig, to seize a 20-16 lead. Baraboo pulled back within a point twice, at 20-19 and again at 22-21 as two Eagles kill attempts sailed out of bounds.

The Eagles ultimately shut the door however, as the Eagles shut the door with a 3-1 run, capped off by a kill from senior Lauren Wideen to take it 25-22.

“We definitely needed that momentum back because we were making way too many errors for our liking; making some weird choices on sets and stuff. We just needed to regroup and get back into it,” Schlimgen said.

Needing a win to stay alive, Baraboo again was up to the task in the opening sequence of the third set. The T-Birds trailed by as many as six at 11-5 but were able to pull within 13-11 following a pair of kills by sophomore McKenzie Gruner and an Eagles attacking error.

Again Sauk Prairie had a response though as it stretched the advantage back out, using a 7-3 run, including two kills and an ace by Shadewald, to seize a 20-14 lead. After trading points, Baraboo pulled back within 22-18, but the Eagles shut the door with a Wideen kill to finish off the sweep.

Along with her kills and service aces, Shadewald was one of three Eagles players with three blocks alongside Wideen and senior Madison Pertzborn. Schlimgen lauded the entire blocking effort for the Eagles, admitting its “the best blocking we’ve done so fa,” and also praised the lengthy Shadewald’s work.

“She is making better choices, so if the ball is off she’s rolling it in; she’s placing it and she’s got that super high vertical too. She’s doing a nice job and honestly we’ve seen her hit better than that,” Schlimgen said.

With the win over the T-Birds in the books, the Eagles turn their attention to Saturday’s Badger North Conference tournament. While they sit in the bottom half of the league standings, Schlimgen knows that given the Eagles’ tight contests during the regular season, they can hang with the top teams.

“The biggest thing is that hopefully the girls believe, that they know they can play with the big teams and we’re right there,” Schlimgen said. “We’ve seen them all, played with all of them and can prepare for all of them. There’s nobody to be afraid of and we can play right with them.”

Slowly but surely the Portage/Poynette girls soccer team has been stacking successful seasons on top of one another.

A trio of Baraboo High School athletes were named to the 2019-20 Northern Indigenous All-State Team.

THIS DAY IN SPORTS HISTORY: Baraboo baseball comes back to win 2015 regional title

This time last year, the Baraboo softball team had just lost to Verona, 11-1 in six innings, in a WIAA Division 1 regional final.

Sauk Prairie junior Olivia Breunig goes for a kill against the block of Baraboo's Emma Crary and Jordan Buelow (8) during a Badger North Conference match on Oct. 10 at Baraboo High School.