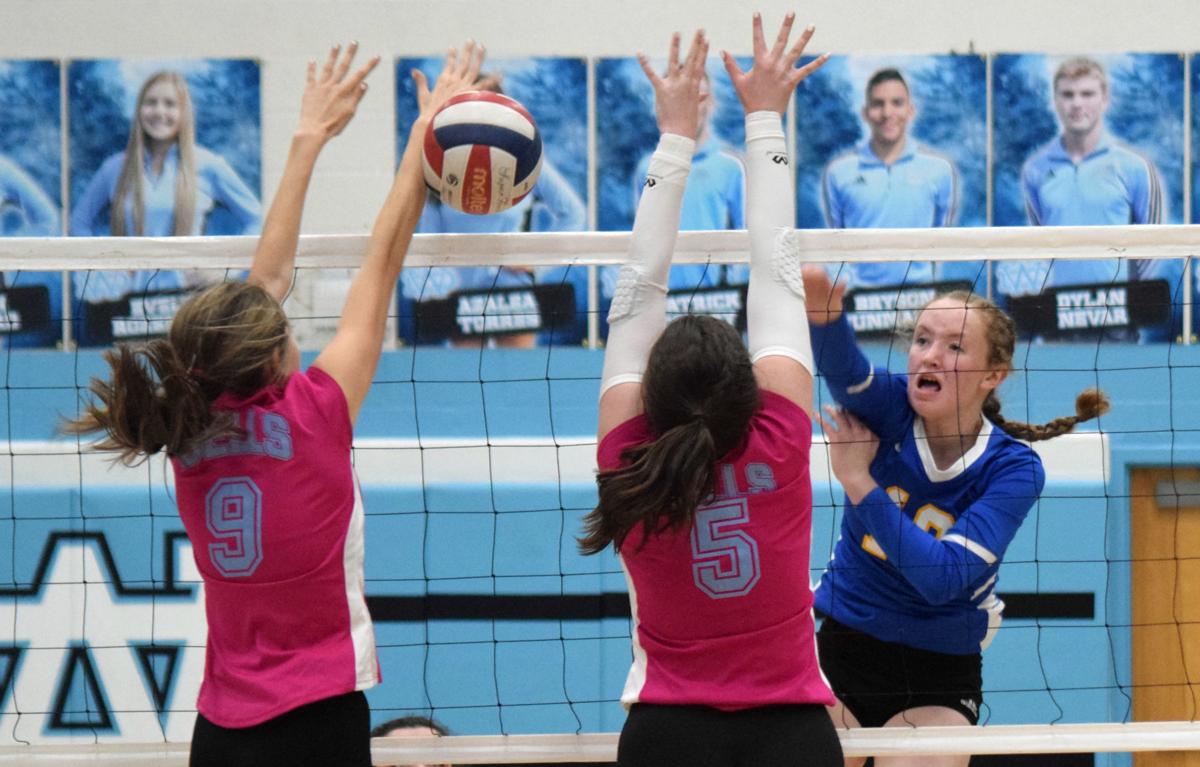 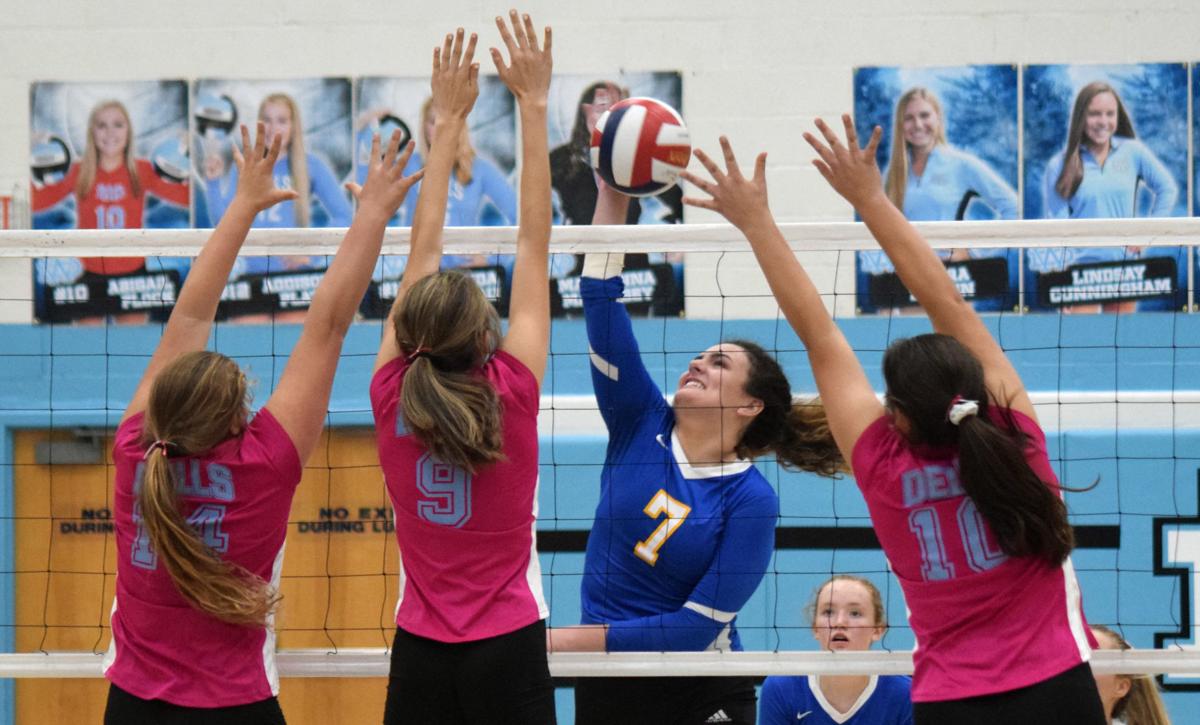 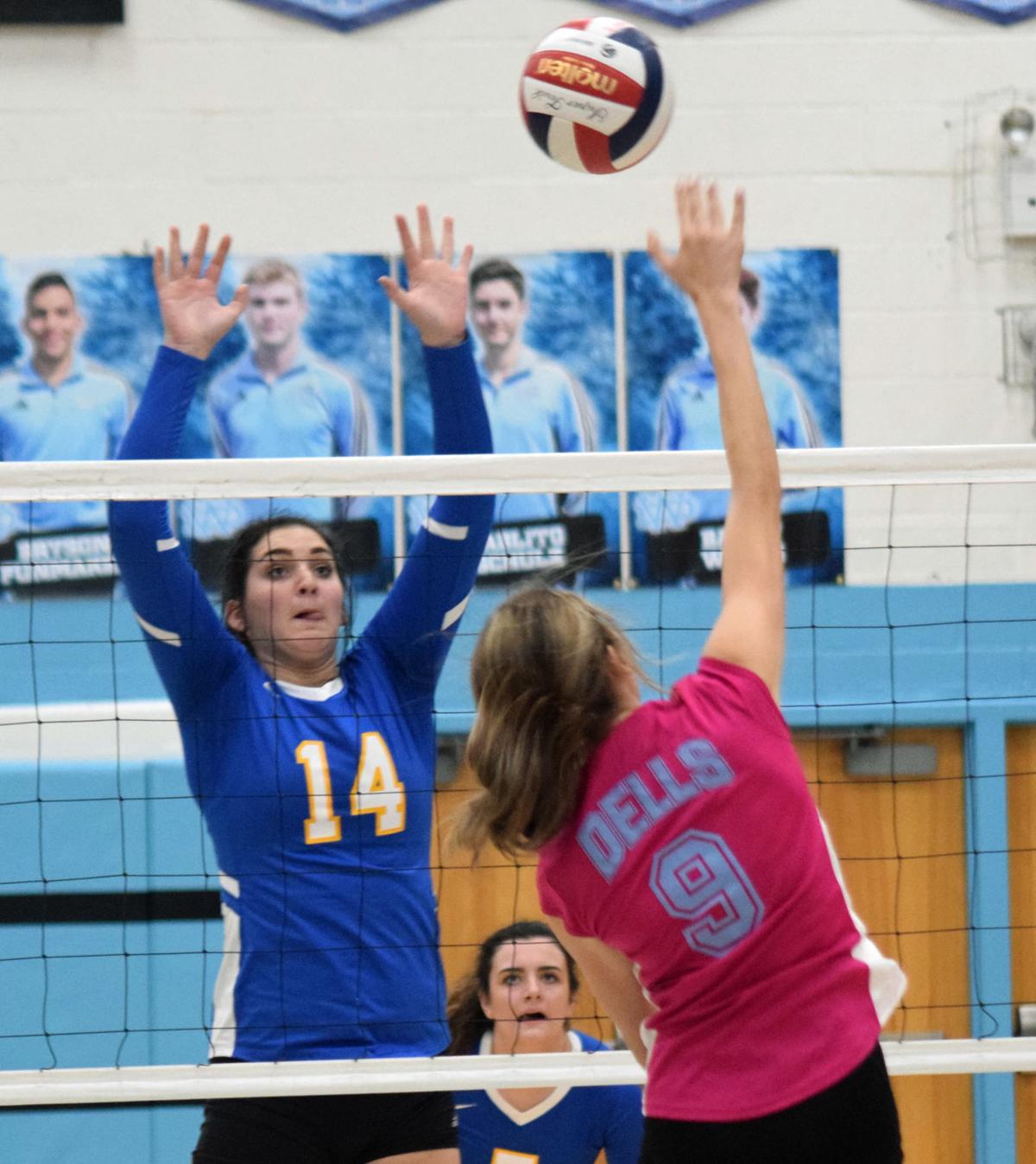 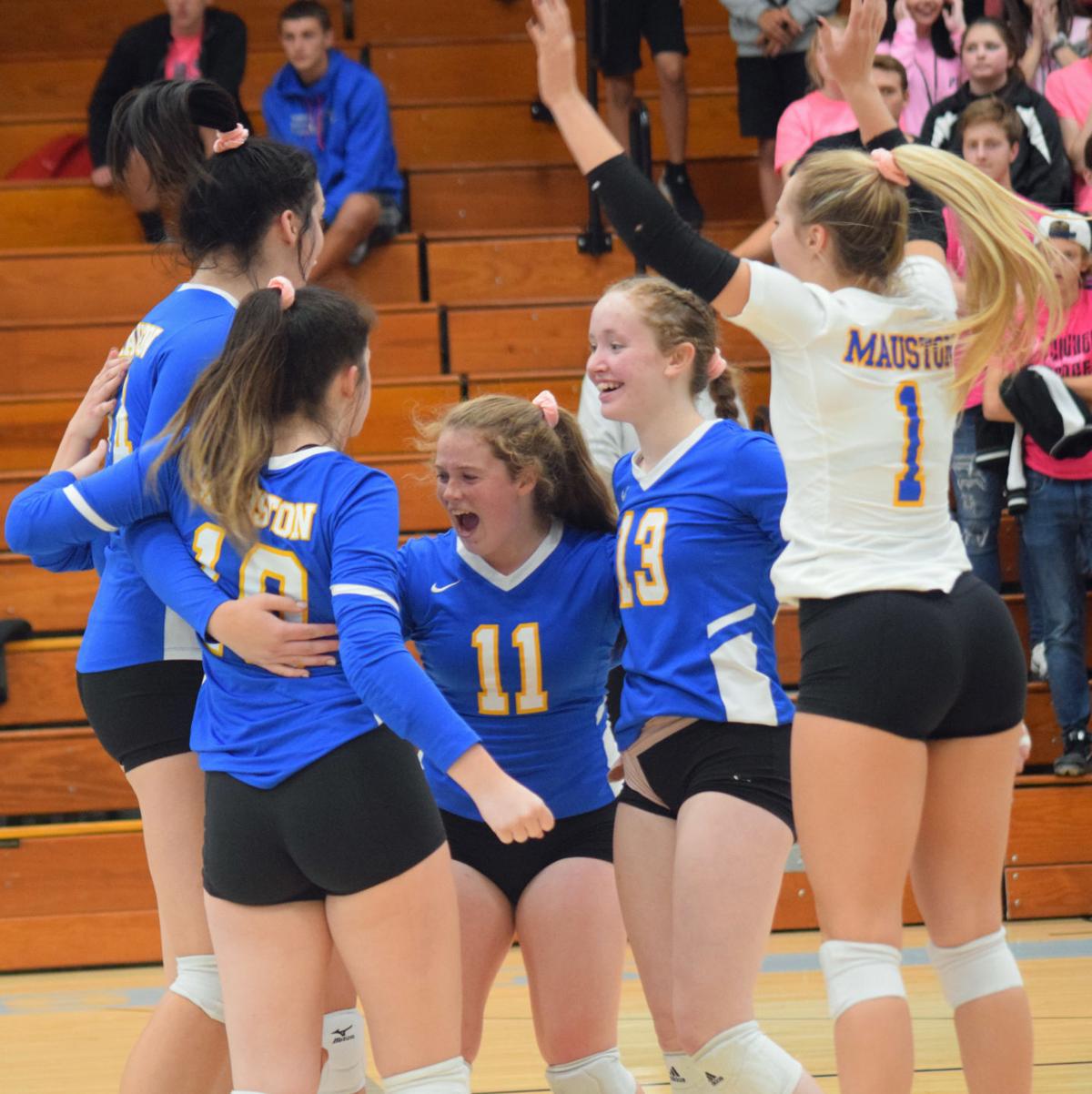 Mauston players celebrate after the final point of a South Central Conference game against Wisconsin Dells last season. The Golden Eagles were a perfect 10-0 in SCC play last season. 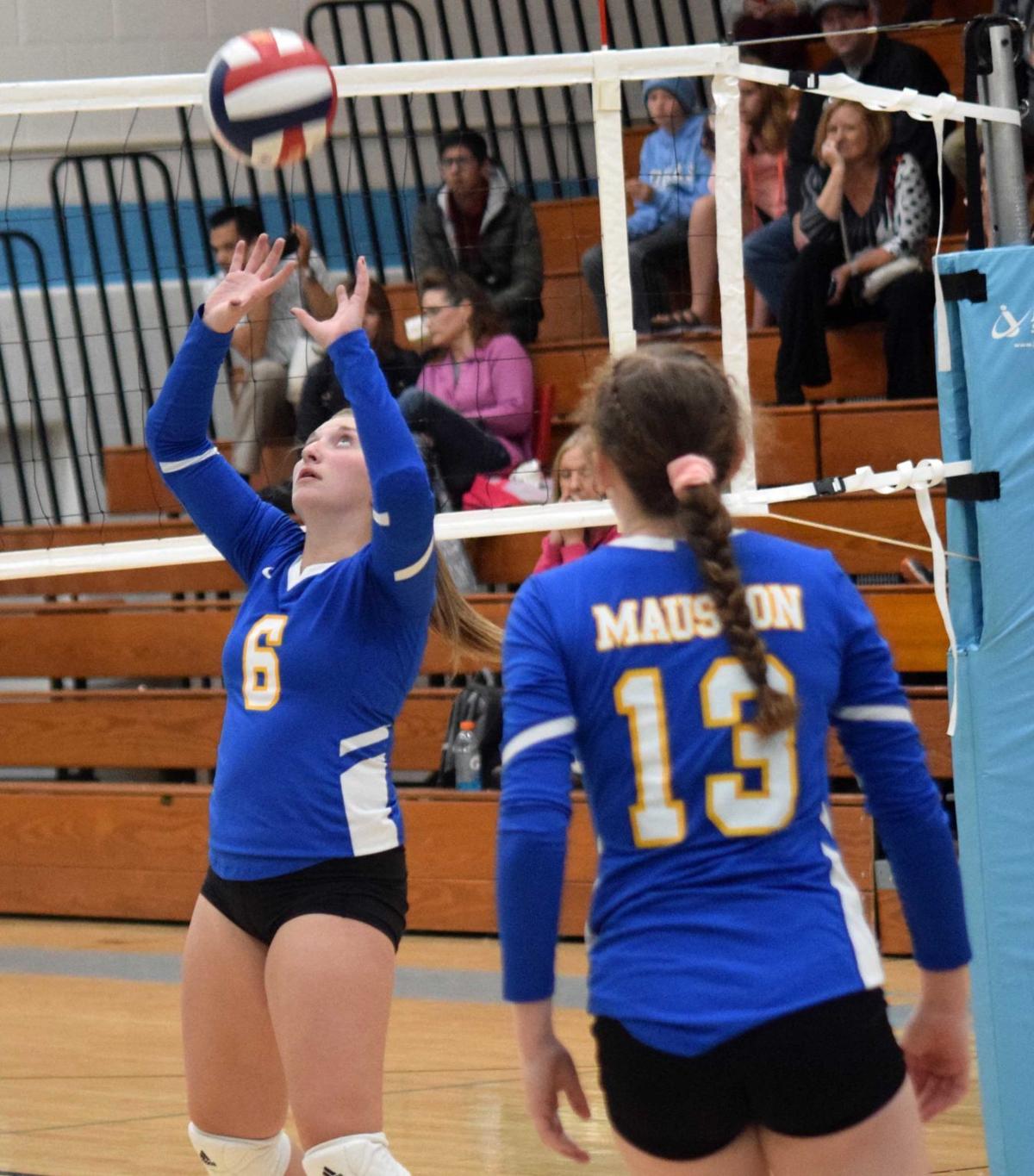 Everything fell into place for the Mauston volleyball team last season.

The Golden Eagles captured their first-ever South Central Conference title behind a perfect 10-0 record, finished 27-5 overall and earned their first trip to the Division 2 regional final since at least the turn of the century.

With over half its team back from last year, Mauston has its sights set even higher in 2020. After such a long layoff however, Mauston coach Tara Hansen said the group is just happy to be back and playing together.

“We got a few games in this summer, playing (in the) league at the JAG until they kind of had a little breakout, before I pulled my girls the last two weeks to just hopefully keep the healthy. From July 10 ‘til last Monday was a long time for us not to be together, so it was great to be in the gym,” she said.

“Their goal is to never lose a set and to make it to state. Definitely to win conference again and then get past regionals, and they’re just chomping at the bit.”

The Golden Eagles have plenty of reason to be itching to play as they return seven players from last year’s squad that fell to Northland Pines in three sets, 25-17, 25-22, 25-17, in the Div. 2 regional final.

Leading the team’s returnees is junior Mia Quist, who garnered first-team All-SCC honors last season. The outside hitter totaled a team-high 308 kills, while adding a second-best 252 digs. She was joined as all-league selections by second-team picks Emma Incaprero and Maddy Scully.

Incaprero led the team in assists last season as the senior setter had 474 helpers, while adding 165 digs and 76 aces, while Scully helped command the net as the senior middle hitter had 176 kills and 33 blocks, including 31 solo stuffs.

The Mauston attack runs far deeper than just Quist and Scully however, as the Golden Eagles also return senior Matti Wafle and sophomores Anna Kudick and Brie Eckerman. Wafle (157) and Kudick (123) each had over 100 kills last season, while Eckerman (82) rounds out the Golden Eagles’ top-five attackers.

“Mia and Anna both have (strong) verticals, Brie Eckerman out on the right is the tiniest kid out there, but she gets up there and is a lefty, so she’ll come at you and you won’t be expecting it,” Hansen said.

“With that (depth), we’re building upon what we did last year and adding more plays to our repertoire, and we’re already practicing that and starting to get our plays in. The girls are really taking to that and want more.”

Rounding out the Mauston returnees is senior Paige Navis, while the Golden Eagles add senior Sadie Eckerman and juniors Amelia Gunther, Faith Hendrickson and Erin Cauley. Even with the newcomers, Hansen views the team’s cohesiveness as one of its biggest strengths.

“They know each other really well, and even with the addition of Sadie and Paige, they played together all summer, learning their ins and outs with each other and they’re very confident they’re a core group of girls together,” she said.

With that being said, Mauston must still fill the void left by the loss of five seniors, including first-team libero Sam Thrasher and second-team selection Sam Kobylski. Thrasher accounted for a team-high 430 digs last season, while Kobyski had 289 assists and 73 kills.

“They’re both hard to replace and we have girls that kind of cover Sam Kobylski’s spot, but Sam Thrasher is a whole different story,” Hansen said.

Thrasher flew around the court last season, and while Hansen admits the team won’t be able to fully replicate that, the Eagles have been proactive in trying to do so.

“We’ve had lots of girls who are working more on their back row skills, and my tall girls think they’re passers too, so they’re like ‘Yeah coach, I’ll play in the back row,’” she said. “Just because you’re 6-2 doesn’t mean you can’t get down there and pass the ball, so we may not necessarily have a libero who is like Sam Thrasher, but have girls that can play all around the court.”

Whether that translates on the court will come with time. Should it take a little longer, the Golden Eagles will have a calming force at their disposal with Incaprero. Hansen lauded the setter for being able to take charge on the court.

“Sometimes you really have to explain to your setter, because they’re the ones in charge; you can’t stop and talk during the game, so the setter really needs to take charge during the game,” she said. “You don’t have to worry about that with Emma. They just all really get along well together, and Emma is the leader.”

The team has also gotten comfortable with the new COVID-19 safety protocols. Hansen said the team is “doing a good job wearing their masks, cleaning the balls and social distancing,” even if she has to give a friendly reminder to have their masks cover their noses.

Mauston has also shown its adaptability in accepting the new schedule for this season. The Golden Eagles are only playing four non-conference games on top of their 10-game SCC slate, including a Richland Center Triangular in early October.

At this point however, Hansen said the group is just pleased to be playing and will deal with the WIAA’s decision on “culminating events” it gets to it.

“We want to beat the conference first; conference comes before state, and then they know we’re not in control of what happens after that,” she said. “If we get a postseason we’re going to be ecstatic, and if we don’t then we’ll have to be okay with what we do get. We just have to take it one game at-a-time.”

PREP BOYS SOCCER: Mauston hoping to put pieces together in 2020

For more than half a decade, a new high school for the School District of Wisconsin Dells has been on the minds of the community and district …

Since joining the SWAL/SWC Conference last season, the Wisconsin Dells girls golf team has asserted itself as the top team in the league.

Mauston players celebrate after the final point of a South Central Conference game against Wisconsin Dells last season. The Golden Eagles were a perfect 10-0 in SCC play last season.