Please log in to keep reading.
Enjoy unlimited articles at one of our lowest prices ever.
You have permission to edit this article.
Edit

The hum of Afghan children's laughter, chatter and playful squeals could be heard throughout the streets of Fort McCoy military base in western Wisconsin Thursday morning.

Fort McCoy officials allowed members of the media inside Fort McCoy for the first time Thursday. With nearly 13,000 evacuees, the military base is hosting the largest Afghan population of any other military installation in the U.S. Nearly half of the evacuees are children.

Sameer, 12, grinned as he ran to catch a purple frisbee thrown by a volunteer in a grassy area near the Women and Children's Center. Sameer came to the U.S. from Afghanistan with his grandmother. He giggled sheepishly, and said he likes it at the base, in part because he gets to play with his bicycle.

Fatema Ahmadi, 31, a women's rights advocate, said she had to leave Afghanistan because there would be "no place" for her and other female civic leaders under Taliban rule.

"I was ... in serious danger," Ahmadi said. "Americans helped me to get out of the crowd around the airport, and then come here."

She's grateful she was able to get evacuated, but said it's going to be tough for her, especially because her family could not come with. She teared up when talking about saying goodbye to them, and she said she hopes she can find a way to bring them to the U.S. She said she had no plans to leave her home country, and liked her life in Afghanistan.

"I have to start from scratch here," she said.

Although the Afghans' stay is temporary before they find a more permanent home in the U.S., the base has become a sort of makeshift city with neighborhoods, two mayors, police, community meetings, mosques, classrooms, laundry buildings and a cafeteria.

So far, eight women have given birth at nearby hospitals to babies who are now American citizens. Another 230 women on the base are pregnant.

The 60,000-acre fort has more than 250 barracks-style, two-story housing buildings that line the streets in rows. Each houses around 60 refugees, and has hot water, heating and private bathroom areas.

"It’s building a city for 13,000 in ten days," Col. Jennifer McDonough said of the process to prepare the base for the Afghan evacuees.

But the process has not been entirely smooth.

The Wisconsin State Journal in mid-September reported that Afghan refugees initially had to wait in hours-line lines for meager amounts of food, and many had still not received a new set of clothes for at least 10 days after arriving from Afghanistan, many with just the clothes on their backs.

McDonough said a food supplier from south Louisiana had been impacted by Hurricane Ida, which affected the meal supply. But she said that problem was quickly addressed, and the four dining facilities on base are now "running incredible." The facilities produce roughly 39,000 meals a day, each with a protein, a carbohydrate option, drinks, and fresh fruits and vegetables, McDonough said.

Still, not all of the Afghans have received clothes. Lt. Col. Robert McTighe said staff are getting close. As of Thursday morning, about 11,390 of the nearly 12,600 Afghans had come through a distribution center to receive at least one new set of clothes. The rest of those remaining will have an opportunity to come through later Thursday, and finish up on Friday, if needed, McTighe said.

Fort McCoy is still seeking donations of new or gently-used clothing, which can be dropped off at Salvation Army locations across the state. Winter clothes are in especially high demand. Roughly 4,500 winter coats have been distributed so far.

Dozens of women, with their children in tow, sorted through boxes and boxes of clothing and shoes Thursday morning. They held them up pants, shirts and sweatshirts to see if they were the right size. McTighe said most people have been able to find their correct sizes, but some of the donated clothes have been too big for the Afghans.

Fort McCoy has also had some issues with alleged crimes happening. Two men were arrested last week, one for allegedly sexually assaulting two boys, ages 12 and 14, and another for allegedly choking and suffocating his wife. Officials declined to say whether there are any other ongoing investigations at the base.

Brigadier General Christopher Norrie said there is a "robust police presence" in each of the eight neighborhoods at Fort McCoy. Two uniformed military police walked down a street in the "2600 community," armed with guns, handcuffs and a baton.

"This is a very safe community," Norrie said. "Crime rates are very low for a city of this size."

Ahamdi said she wanted to speak out about her experience because she wants U.S. citizens to know that Afghans are good people, just trying to start new lives here.

"Afghans are not terrorists. We were normal people," she said. "We were human beings just living in our country."

Abdulhadi Pageman, a 44-year-old Afghan man, is a Black Hawk military pilot who helped to support the U.S.'s efforts in Afghanistan. He said others in his same position were assassinated.

Before getting evacuated, he had to jump from home to home, staying with friends to hide from the Taliban. He said they were looking for him.

"It was unimaginable," he said of watching his country fall.

Khwaga Ghani, 30, an NPR reporter who grew up in Afghanistan and then Pakistan, said her sister called her in the middle of the day from her office in Kabul to tell her the Taliban had reached the city. Ghani left the NPR office is Kabul and started running home. She saw people all around her running to hide from the Taliban.

"Until then I couldn’t believe it — that it’s going to happen," Ghani said. "I could not imagine myself running like that ever. My mom was really sacred. She kept calling me and was like, ‘Get home.’”

On Aug. 19, she went to a safe house for journalists at a hotel. She eventually got a call from a friend saying she needed to be at a certain spot at the Kabul airport at 7 p.m. It took until 4 a.m. the following day to get through the security checkpoints, and then another few days of sleeping on the ground before she could get a flight out with her family.

Ghani flew to Qatar, then Germany, where she spent four or five days sleeping in a hanger right next to other women and children, as many children cried.

"I can’t forget those four or five nights," she said. "Everything was horrible."

Ghani said she's grateful to be at Fort McCoy with her family. She said she's connected with a group of journalists on base, and it's "pretty nice here."

Pageman, too, said he appreciates the help he received from Americans and is happy with the conditions at Fort McCoy. He hopes to move to Arizona and said he is ready to start his new life.

Farzana Mohammadi, 24, was a member of the Afghan women's Paralympic wheelchair basketball team. She spoke in Dari through a interpreter.

Mohammadi said she decided to come to the U.S. because the Taliban would not have let her play basketball. America was the one country as a child that she always wanted to move to. She said she wants to play basketball and study to be a psychologist.

"I still can't believe that I'm here," Mohammadi said. "I'm very happy to be here, and I think I'll have a very bright future." 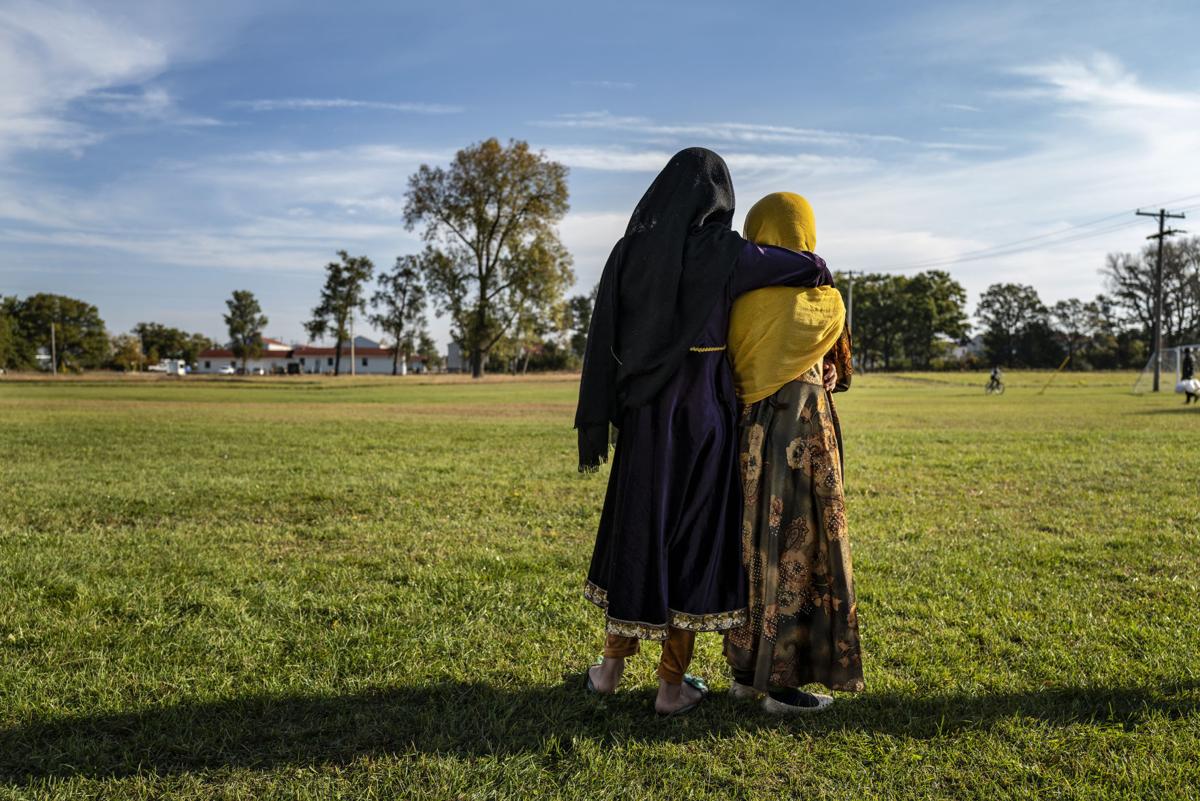 Two Afghan girls watch a soccer game Thursday at Fort McCoy, one of eight military installations across the country that are temporarily housing the tens of thousands of Afghans who were forced to flee their homeland in August. Reporters were allowed inside the facility for the first time Thursday, where refugees said they were grateful to be safe but were experiencing a mix of emotions including boredom, worry and hope. 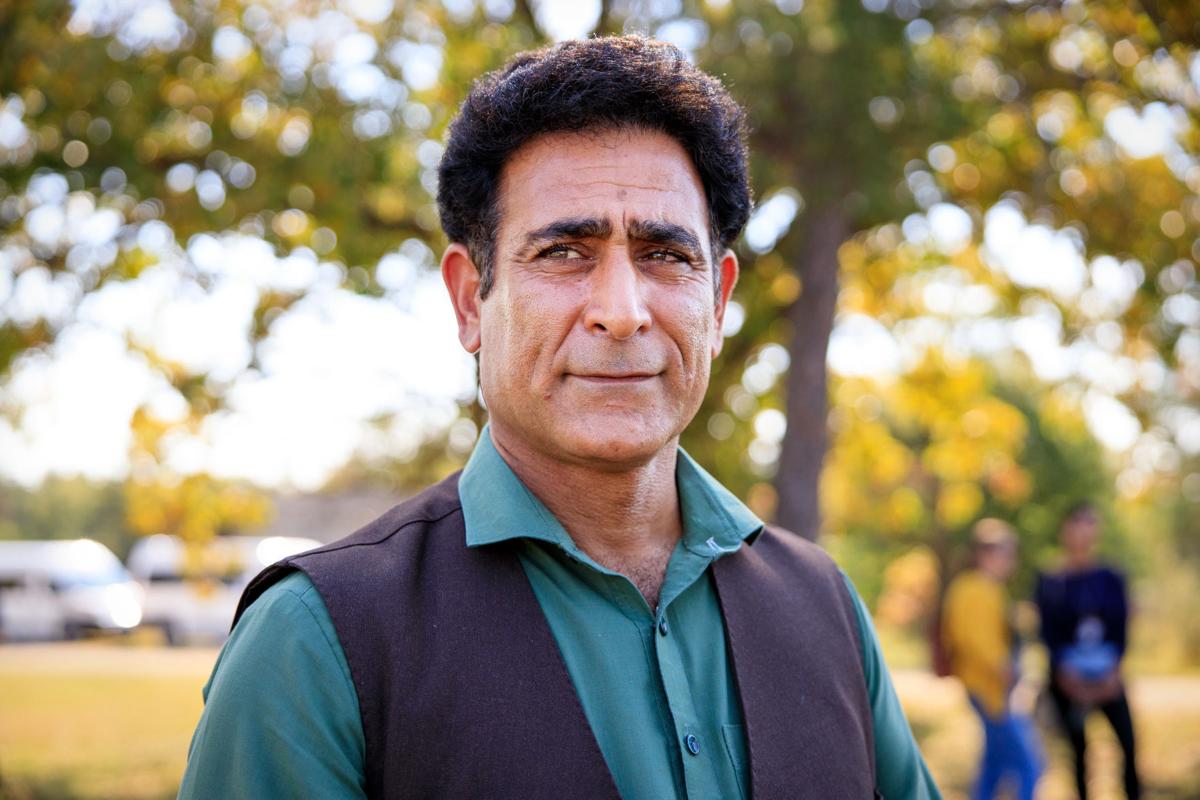