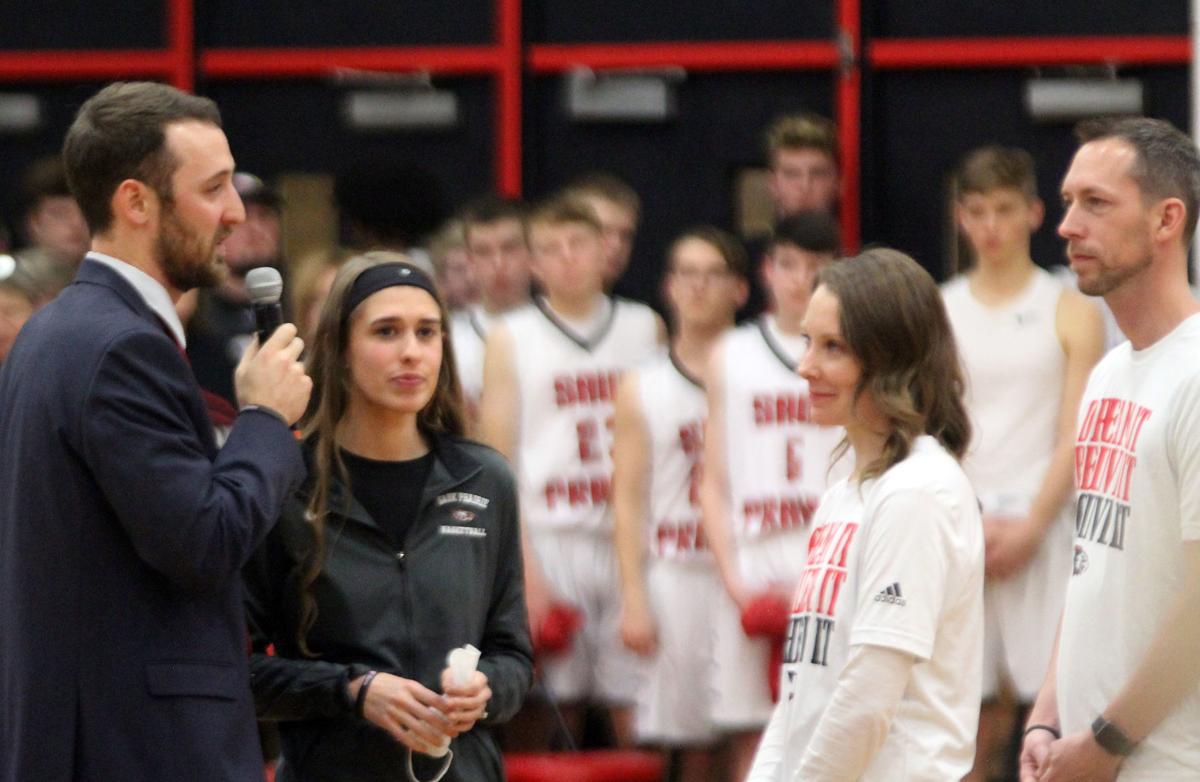 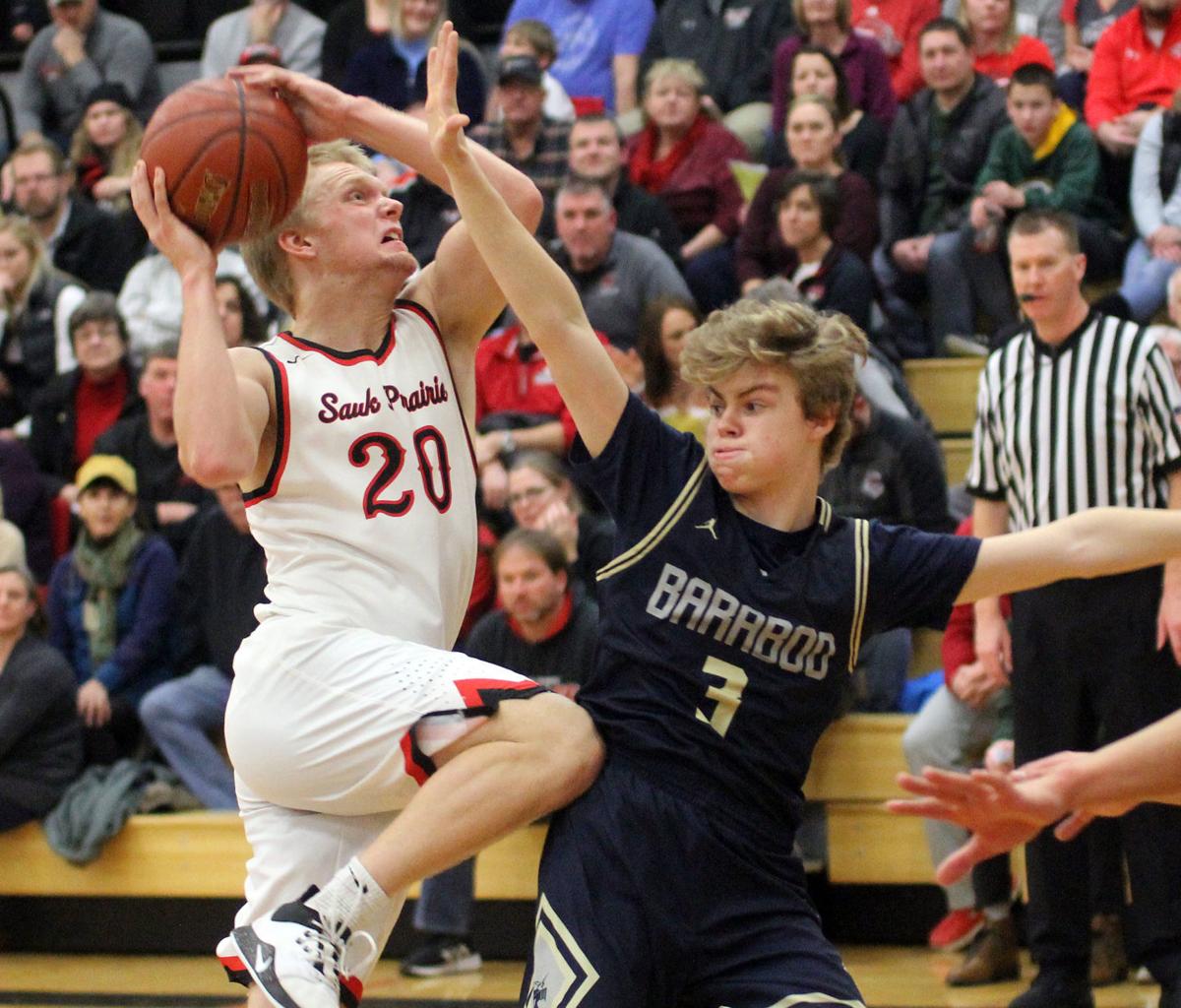 Thursday night’s crowd at Sauk Prairie High School was there for more than a basketball game.

“A special game,” McGann, a 2012 graduate of Baraboo, said of the benefit for Gruender, who has dealt with consistent seizures since Nov. 1 due to an undiagnosed brain disease. “I went to Baraboo and have strong ties with the community, so I thought this was the perfect game to have our fundraiser for Alyssa, because those are the two communities I care about the most. I told my guys ... I don’t say this often in the locker room, but I said, ‘Just have my back and play for Alyssa tonight.’ She was here all the time last year, and this was her first game this year, so she was so excited to see those guys play. She knows them a lot of times better than I do ... she’s always talking to them when she’s at practice."

The Eagles (4-6, 3-3 Badger North) put on a show for her from the opening possession, attacking the Baraboo (2-9, 0-6) zone and grabbing an offensive rebound that led to a Ben German basket. They kept attacking, as Trevor Spray put back his own miss before Isaac Breunig and Parker Breunig hit back-to-back 3-pointers to give Sauk Prairie a 10-2 lead and force a Baraboo timeout with 14 minutes, 38 seconds to play in the first half.

Sauk Prairie didn’t slow down, going on a 12-0 run before Max Koenig scored inside to end a six-plus minute Baraboo scoring drought and make it 18-4 with 8:45 to play. Isaac Breunig came right back down and hit the third of Sauk Prairie’s eight 3-pointers, then German assisted Spray inside, and Spray turned a steal into a fastbreak dunk to open up a 27-4 advantage.

Koenig tried to ignite the Baraboo offense, scoring seven of his team’s nine first-half points. But the Eagles never lost momentum, as Spray hit a buzzer-beating 3-pointer to give them a 34-9 lead going into halftime. Spray scored 17 of his game-high 19 points in the opening 18 minutes.

It was a perfect script on an emotional night for the Eagles.

“Coming into it, I really didn’t know what to expect, but when people started coming in an hour before the JV game I was like, ‘Holy cow, this might be really special,’” McGann said of the energy in the building. “I told our guys that I love basketball, and they should love basketball, but there are things in life that are way bigger than basketball. This was a prime example of that tonight. Yes, at the end of the day we played a basketball game, but coming together for a person that really deserves it, that was the greatest thing.”

Spray and Wilson were trouble for undersized Baraboo, finishing with 19 and 12 points, respectively. German added nine points from the point guard position.

Just five T-Birds scored on the night, led by Peterson, who had 10 of his 12 points in the second half. Koenig finished with nine points, while Gabe McReynolds had four points, and Brady Kelly and Will Jurvelin had two points apiece.

Gruender, who went to Appleton North High School and ran track at the University of Wisconsin-Stevens Point, spoke prior to the game while standing alongside her parents, Brian and Laura, and McGann.

“The hardest thing right now is ... everyone goes through hard times, but right now, we don’t know what we’re facing,” McGann added. “It’s kind of been the waiting game for almost three months now. It’s one thing if we’re facing something bad and we know and have a treatment plan. But right now, it’s just kind of trial and error.

“I get pouty sometimes, I get down, I get sad,” he added, pausing after expressing each emotion he feels, “and she’s always there to pick me up when it should be the other way around.”

A wider community has also opened up to McGann and Gruender, helping a GoFundMe — www.gofundme.com/f/fight-like-a-soldier — raise more than $47,000 between Dec. 31 and Thursday evening. The fundraiser, which lasted during the junior varsity and varsity games, raised $22,267.54, according to Sauk Prairie athletic director Josh Boyer.

When McGann took the head coaching job prior to last season, he replaced Levi Massey, whose wife Katie dealt with breast cancer during their time in Sauk Prairie.

“I talked to Levi for 30 minutes last night, and Katie and I text every single day,” McGann said of the Masseys. “They’ve been like rocks for me. As unfortunate as it is, Levi and Katie have helped us prepare for what we’re facing. It’s just been awesome to have that support system where I know I can give Levi a call at literally any time and he’ll answer it. They’re great friends for life.”

The current Sauk Prairie players have also helped their coach out through the first 10 games of the season.

“Last night I had a senior text me and say, ‘Hey coach, I know you’ve been going through a hard time and you’ve been handling it great, thanks for sticking with us,” McGann said. “It actually brought me to tears, because these kids are 16, 17, 18 years old. A lot of times they don’t know what I’m dealing with, but for them to have the maturity to come up and say that ... there’s some people that might say it’s weird to tell my players I love them, but we always use the word love. He just said he loves me and that really hit me that, ‘Wow, these kids are starting to get what it means.’

“Everyone coming together as one team tonight was the coolest thing.”

The Eagles outscored the Warriors 32-11 in the second half for their fifth win in their last seven games.