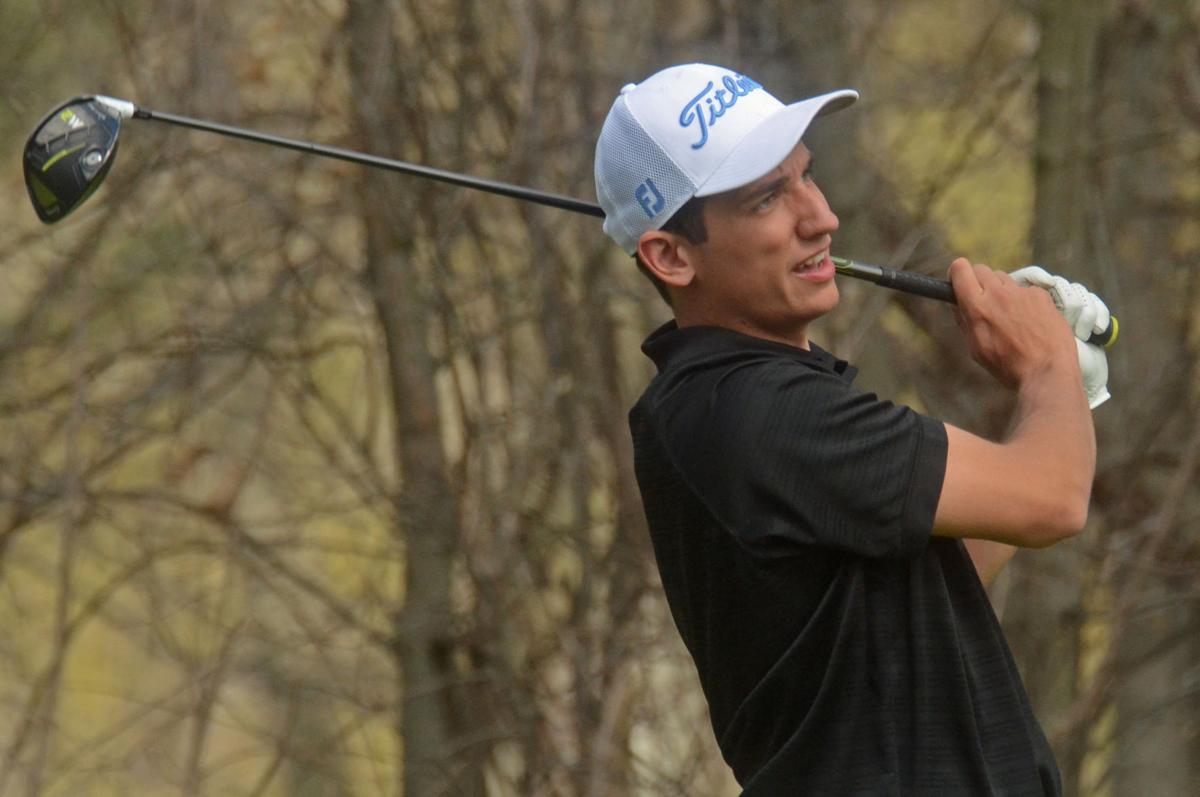 Riley Eck watches his tee shot while playing at the Portage Invitational in 2019. The 2020 Wisconsin Dells grad recently dusted off his clubs, qualifying for the 120th annual Wisconsin State Amateur Golf Championships at Westmoor Country Club. 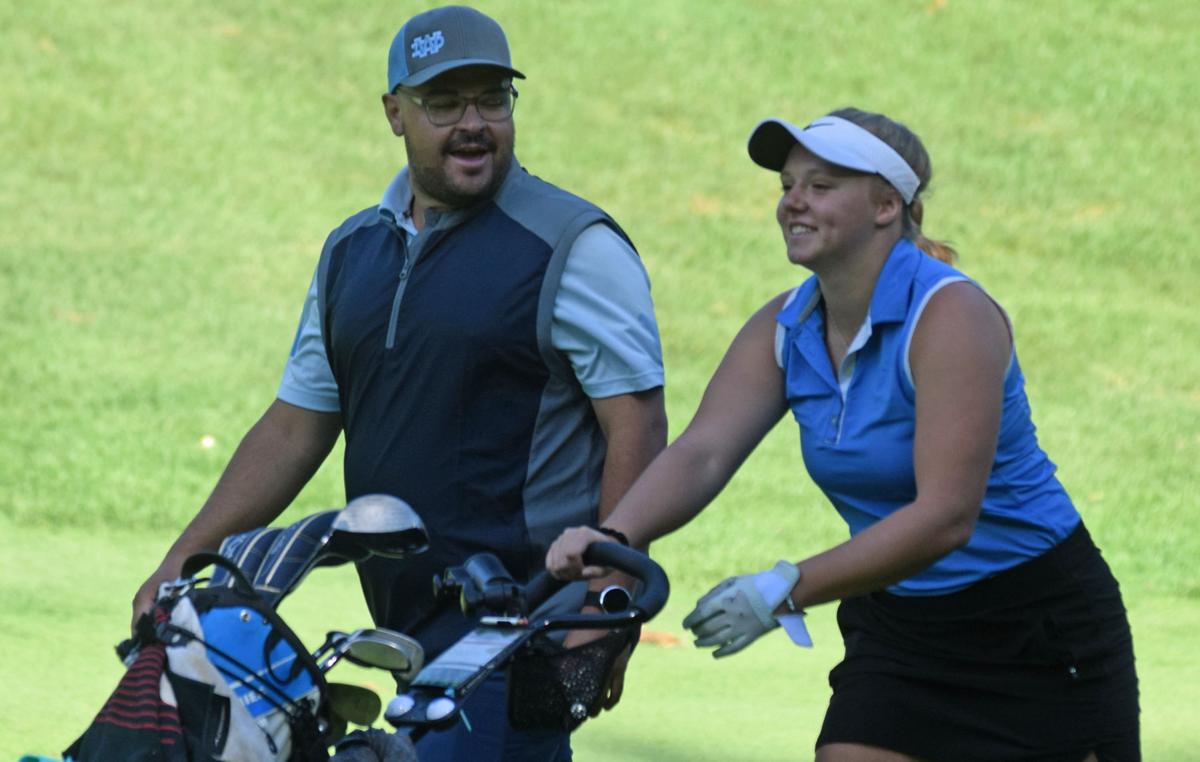 Wisconsin Dells boys and girls coach Seth Neilsen, left, jokes with senior Kayla Gray while walking to the green on the par-4 first hole of the Canyon Course during a South Central Conference mini-meet last September. Neilsen was on the bag as Eck's caddy during the WSGA Amateur Qualifier at Lake Arrowhead Golf Club in Nekoosa on July 14. 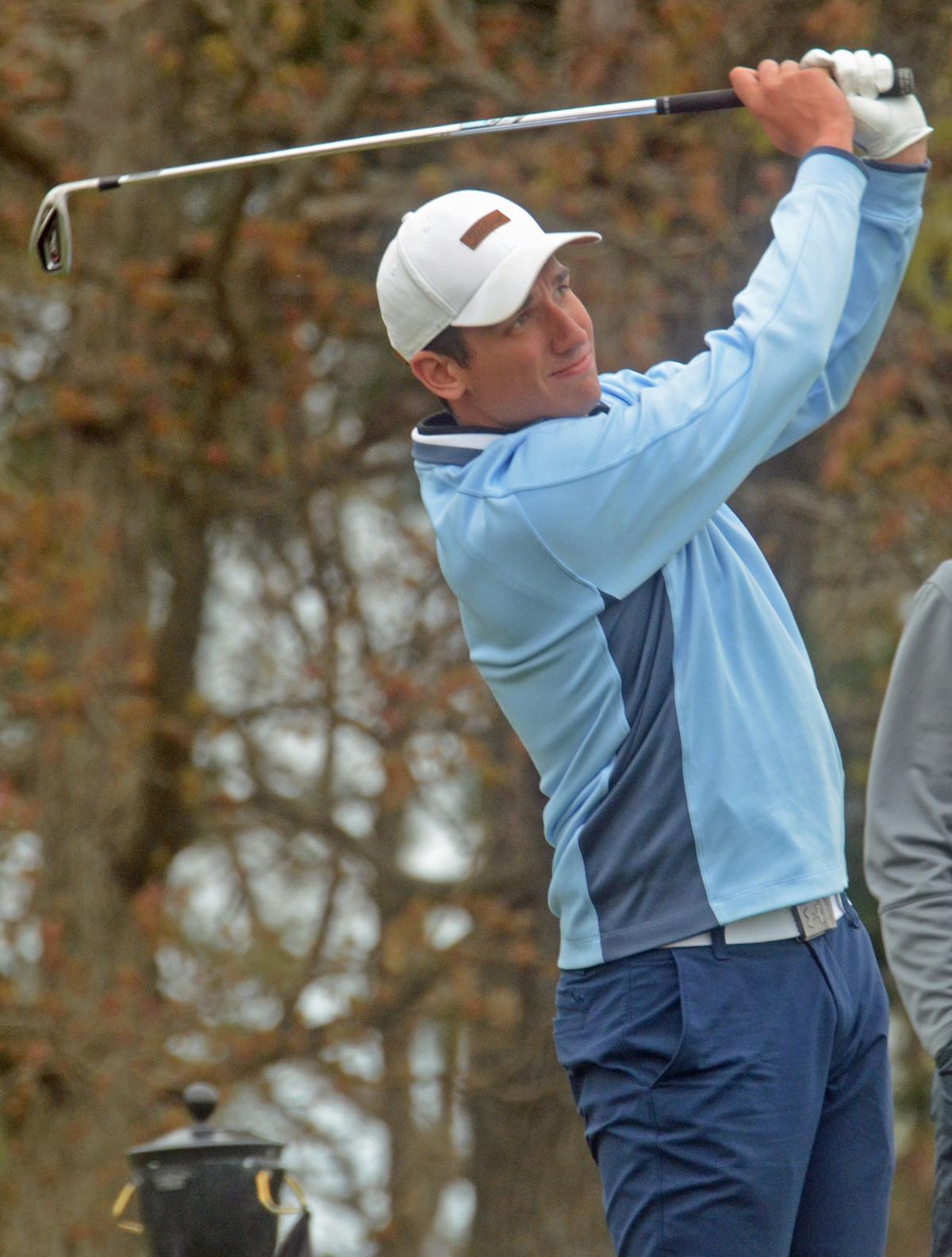 The relationship between a player and coach is an incredibly special connection.

Created through years of working together, cultivating skills and developing a rapport, the coach is usually the perfect person to guide a player in an exact situation.

It made perfect sense than when Riley Eck was ready to dust off his bag and get back into competitive golf, the person he wanted caddying for him was Wisconsin Dells golf coach Seth Neilsen. And after the 2020 grad lost his senior season to the COVID-19 pandemic, the Chiefs lead man jumped at the chance to help out a former pupil.

“After my senior year got canceled I kind of just decided to give up competitive golf and just play for fun and stuff like that. I was playing pretty good so I was just like, ‘Hmmm, let’s give it a shot and see what happens,’” Eck said.

“I just wanted to see how I could do against some of the best guys and I ended up qualifying because I shot a 73 at the qualifier and made it through. It was with Neilsen on the bag and I think that was even cooler, I think.”

“It meant everything and it was so awesome; it was just like old times when I was coaching,” Neilsen added.

That familiarity, both from Neilsen and the course, certainly benefitted Eck in the qualifier. Having played at Lake Arrowhead a number of times during his prep career with the Chiefs in South Central Conference mini-meets, Eck had an intimate knowledge of the course, namely the front nine “like the back of my hand,” according to Eck.

“It definitely helped knowing just where hazards are and the easiest routes to the hole; knowing how to get to the fairway and stuff like that,” he added.

Despite that understanding of the course, Eck admittedly was a ball of nerves playing in his first competitive tournament since the 2019 WIAA Division 2 Prairie du Chien sectional. That’s where Neilsen came into play, implementing not only his coaching wisdom, but also his ability to put the game on the back burner.

“We didn’t really talk about the score. We both knew in our heads what it was at, but we talked about a lot of other things and not just the shot ahead,” Neilsen said. “It felt really natural; we did what we always did when he was playing, joking around and having a good time.”

“He was always the kind of guy to calm you down and keep you going, which I hadn’t been that nervous on a golf course in a long time since I hadn’t played competitively in such a long time,” Eck added.

Neilsen certainly helped bring down the stress level as after bogeying two of the first five holes, Eck birdied the par-4 eighth to go into the turn at one over par. Another birdie on the par-5 12th pulled him even but Eck followed with a double bogey two holes later to jump to 2-over-par.

The slide stopped after that however, as Eck carded three straight pars to stay in the hunt for a qualifier spot before ultimately being forced into the clubhouse with one hole to go due to a two-hour rain delay. Just like on the course, Neilsen did everything he could to keep the final hole off Eck’s mind.

The efforts paid off as Eck proceeded to birdie the hole and end his day with a 1-over-par 73, just one stroke behind qualifier champion Scott Erickson of Sparta. For Neilsen, it was “super rewarding” seeing one of his top former players shining in the moment.

“Immediately I saw that spark, and I can’t explain what that is, but he was back. He was into it, zoned in as much as he could be and it was rewarding to see. I felt so proud and happy for him because he got robbed,” he added, noting Eck’s lost senior season. “It was unbelievable.”

Eck looked to carry the momentum from his runner-up qualifier finish into the Wisconsin State Amateur Championship at Westmoor Country Club in Brookfield this week but to no avail. The 2020 grad bowed out after the opening two rounds, missing the cut with a 38-over-par.

Despite the frustrating performance, Eck showed some bright spots, especially on Tuesday as he shaved off four strokes from his 21-over-par 91 on Monday with a 17-over-par 87. Albeit a lackluster debut, Eck was pleased with how he performed amongst the state’s best.

“You have to take a step back and look because I’m playing against guys who are trying to become professional golfers and I’m a marketing major at UW-Whitewater,” he said. “So it was kind of cool just to see how hard the course played that Division I college golfers play every day.”

Neilsen was certainly happy with how Eck played given the layoff between his last competitive tournament, which ended with him finishing three strokes shy of qualifying the WIAA Div. 2 individual state tournament as a junior.

“He never really got the chance to show everyone what he could do. He did pretty well his junior year, but that senior year would have been his year. For me it was validation and for him, I think, it was validation that he is a good golfer, he’s a good competitor and he proved it,” Neilsen said.

“Yeah he stumbled a little bit, but that was his first kind of competition in two years essentially.”

Eck is keen on making sure there isn’t another two-year break between tournaments as he intends to compete more often in the future. According to Eck, he “probably played my two worst rounds of the year at the State Amateur,’ but while that’s disappointing, it instills a renewed drive in him.

“I’m playing against guys that are 10 years older than me and some guys that are going to go play professional or Div. I golf and I’m just thinking to myself ‘Today can be the day I have the round of my life,’” he said. “I think that’s something I’m going to keep on chasing and keep on trying to use to keep the competitive spirit alive.”

GOLF: Kulka slips out of top spot, but still in hunt after second round of Wisconsin State Amateur Championship

The 2019 Beaver Dam grad shot a 9-over-par after breaking the Westmoor Country Club course record Monday. He's one of three area players to make the cut for Wednesday and Thursday.

Zak Kulka, a 2019 Beaver Dam grad and junior at UW Green Bay, finished with six birdies to top the State Amateur Championships leaderboard with a 6-under par 64 after one round.

Zak Kulka wasn’t worried about winning Thursday’s Wisconsin State Open qualifier at Old Hickory in Beaver Dam, only about finishing in the top…

Matt Denure, a 1994 Rio grad, hopes to make an impact of current and future athletes as the new strength and conditioning coach for the Portage Community School District.

Riley Eck watches his tee shot while playing at the Portage Invitational in 2019. The 2020 Wisconsin Dells grad recently dusted off his clubs, qualifying for the 120th annual Wisconsin State Amateur Golf Championships at Westmoor Country Club.

Wisconsin Dells boys and girls coach Seth Neilsen, left, jokes with senior Kayla Gray while walking to the green on the par-4 first hole of the Canyon Course during a South Central Conference mini-meet last September. Neilsen was on the bag as Eck's caddy during the WSGA Amateur Qualifier at Lake Arrowhead Golf Club in Nekoosa on July 14.