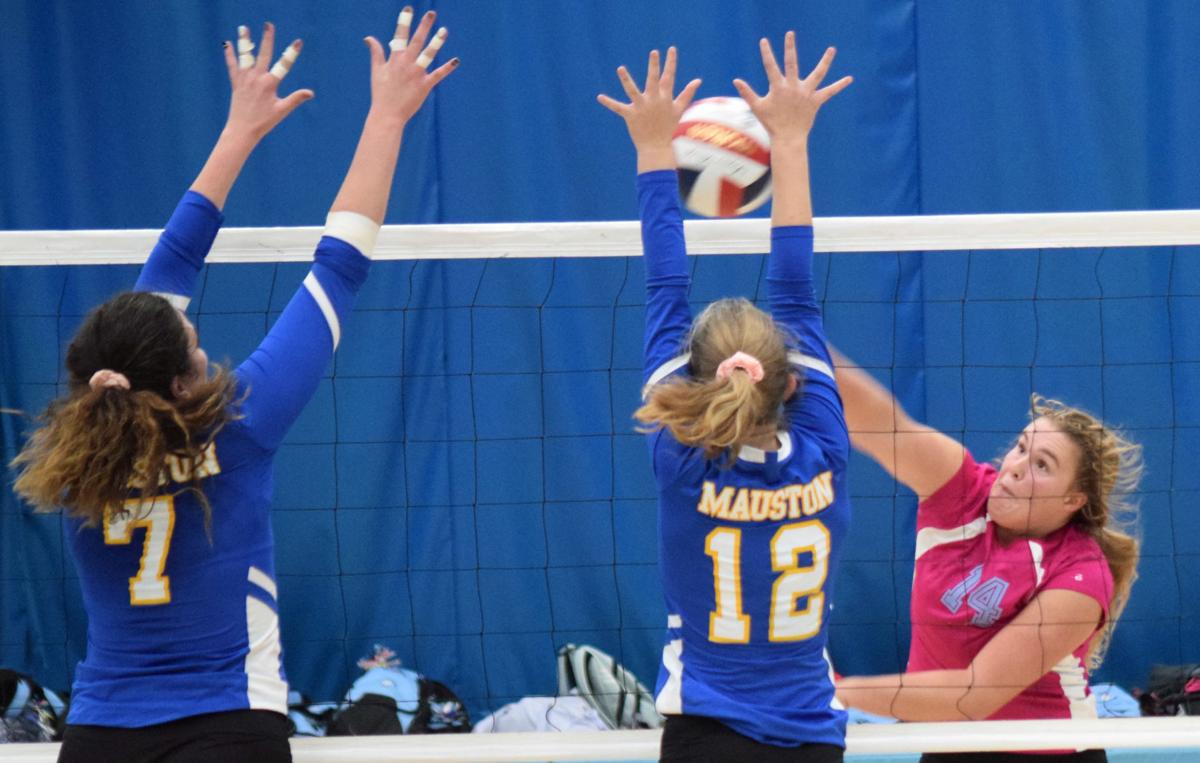 Wisconsin Dells senior Alanna Wilson goes for a kill against the block of two Mauston defenders during a South Central Conference game last season. Wilson will help pace a Chiefs attack as they aim to get back on top of the SCC. 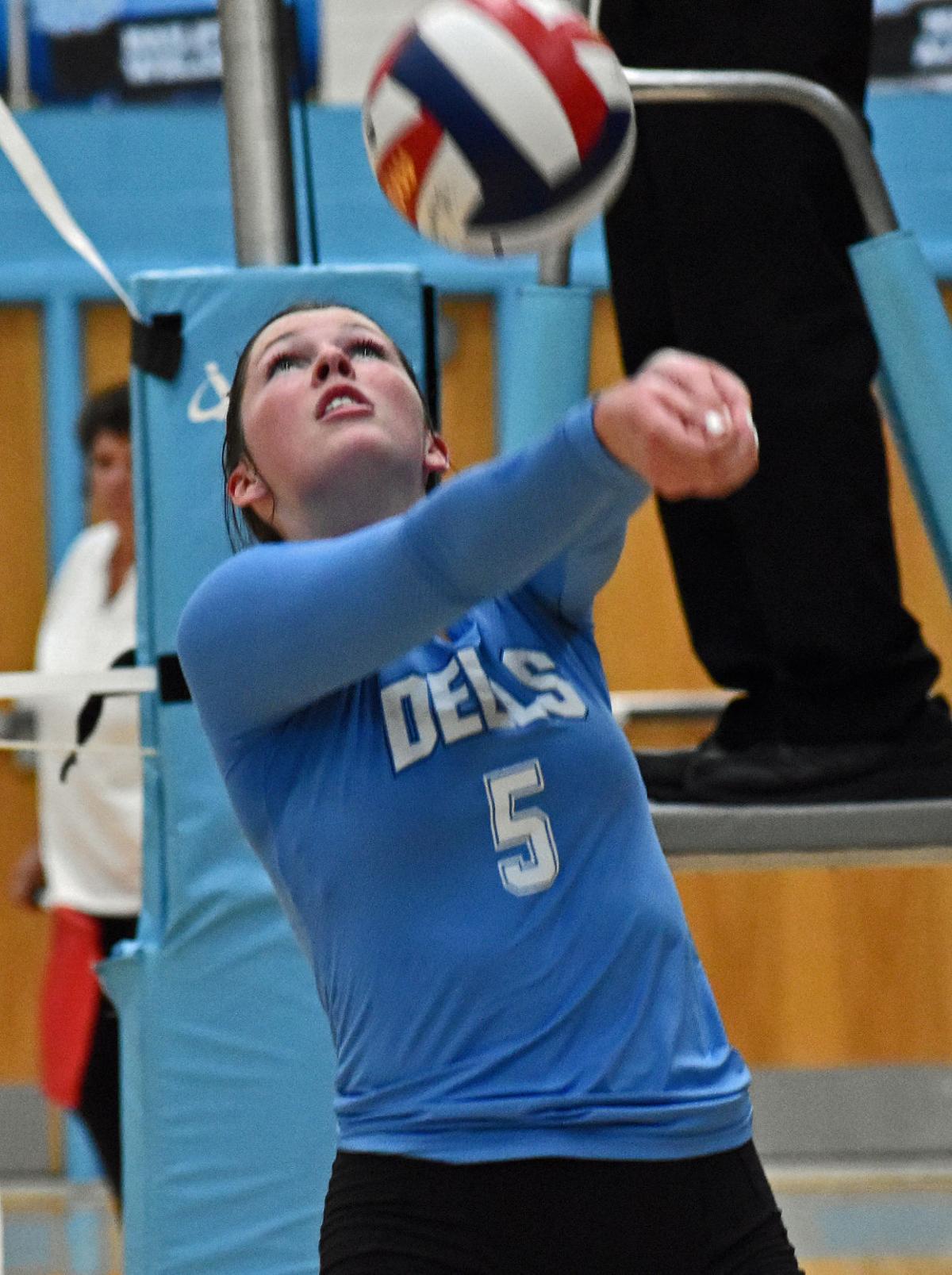 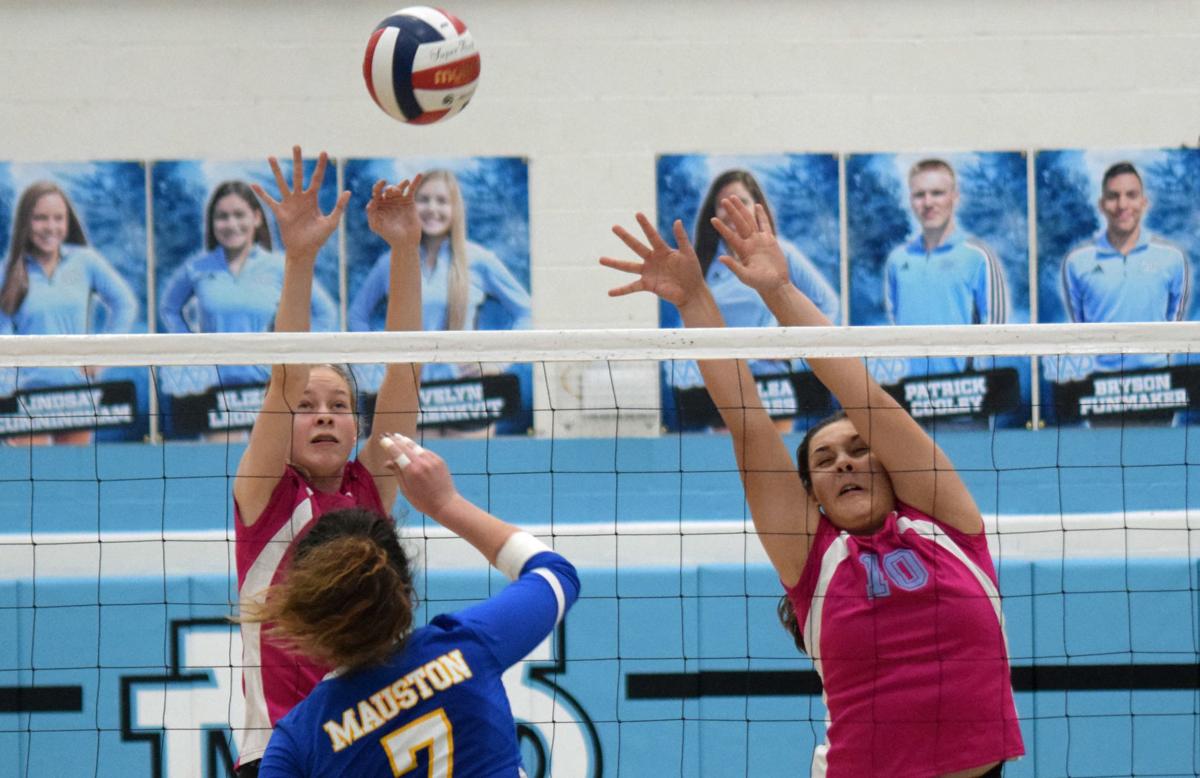 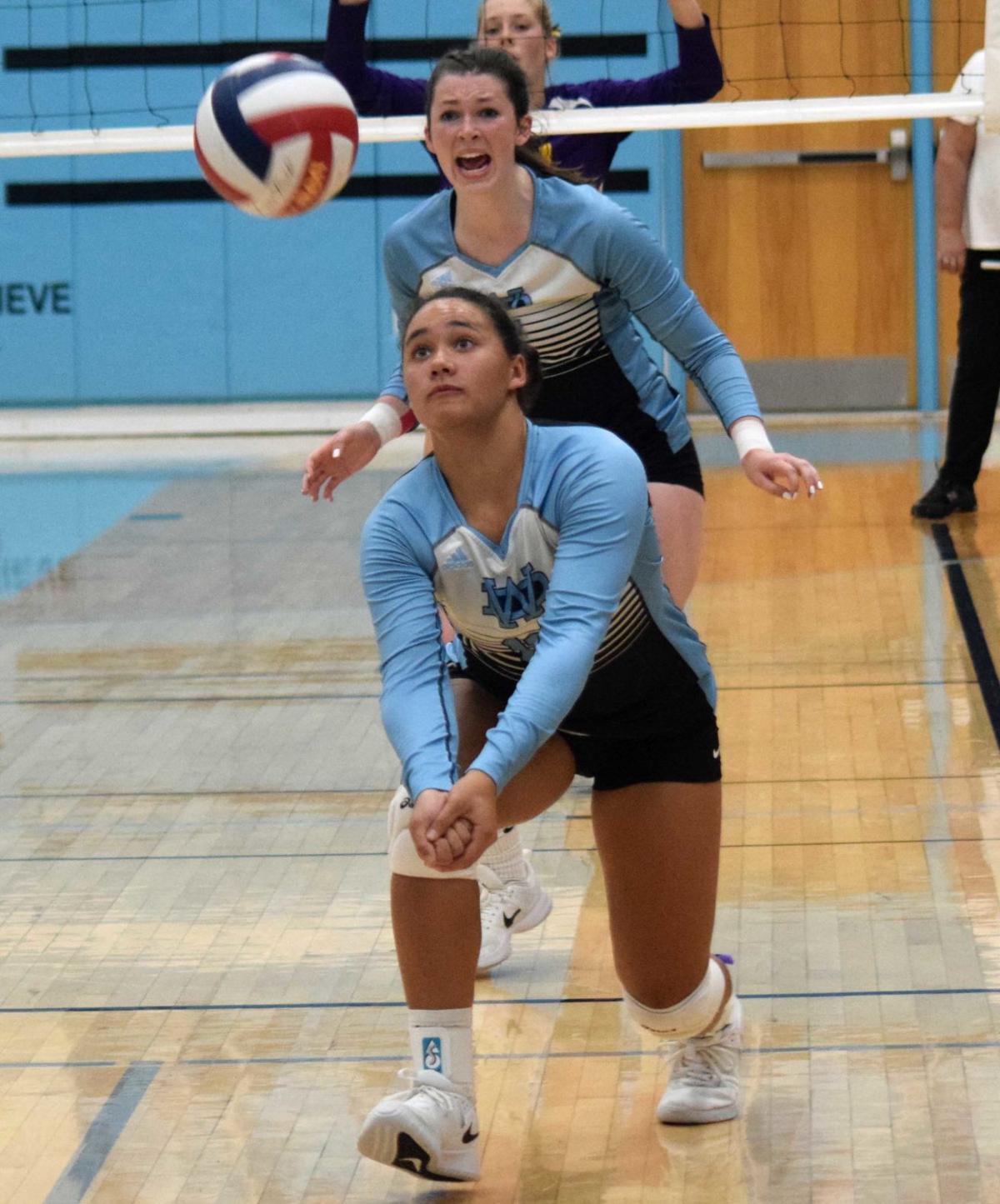 Wisconsin Dells senior Maddie Jones races back to save a point during a South Central Conference match against Westfield last season. Jones will take on an even larger role in the Chiefs back row this fall.

With tons of varsity turnover last season, the Wisconsin Dells volleyball team went through plenty of growing pains in 2019.

Now one year wiser, more experienced and with lots of lessons learned, the Chiefs are ready to rise back to the top of the South Central Conference. In general, however, coach Tami Janke said the team is just thrilled to be back together.

“It’s super exciting, and refreshing kind of because they literally hadn’t seen each other since like July 10, the last time we really were organized as a team. To just be back in the gym, getting to play and be with each other was very refreshing, high energy and happiness,” she said.

After three years atop the South Central Conference, the Chiefs went 6-4 in league play last season en route to an 11-23 campaign last season, capped off by a 3-0 loss to Mt. Horeb in a Division 2 regional quarterfinal. While coming off an early postseason exit, the bright spot for the Chiefs is that they return nearly all of its starting lineup.

Wisconsin Dells graduated three seniors, including starting libero Abbi Flock, who led the Chiefs with 359 digs, but return the rest of its varsity squad. Helping to lead the charge is an experienced senior group, spearheaded by Brooke Hartley.

The four-year varsity player has done it all for the Chiefs in earning All-SCC first-team honors last season.

“For Brooke, she has grown every year and taken on the role I’ve thrown at her every year,” Janke said. “By losing our setter her sophomore year, she was very willing to step into the role and play it because we needed it and she had good hands. Last year she ran a 5-1 for us and we saw a little bit of a detriment because of that, not because of her lack of skills, but because we lost her offensively as a hitter.”

Janke plans to change that this fall as she moves Hartley, who had a team-high 370 assists last season, back outside. Hartley will pair nicely with fellow senior and second-team all-league honoree last season, Alanna Wilson.

Wilson broke out last season with a team-high 139 kills while adding a third-best 31 aces. After putting up strong numbers last season, Janke expects more big things from Wilson in 2020.

“I expect her to just continue where she left off and improve from there,” Janke said, noting that Wilson kept up with her strength and conditioning over the summer. “She came into the season strong and pretty fit, and I’m excited for that because I hope she can pick up where she left off.”

Along with the threats on the outside, the Chiefs bring back plenty of size in the middle with juniors Sophie Venne and Angie Grant, and sophomore Maddie Brandt. Venne led the Chiefs with 31 blocks last season, including 22 solo stuffs, and added a second-best 120 kills.

Brandt, who was called up mid-season, added 55 kills and 23 blocks, while Grant chipped in 51 kills and 16 blocks. In the back row, the Chiefs return a bevy of girls ready to step up, led by seniors Maddie Jones and Paige Tofson.

Jones, who will take over as libero, logged 171 digs last season and a second-best 32 aces, while Tofson added 133 digs. Joining the senior duo are juniors Hana Jo Greifenhagen, Shealee Armstrong and Shelby Bartz.

“We’re going to rely on them a lot and throw Hana Jo into the mix, and I hope we’re strong,” Janke said.

Coupled with the returnees, the Chiefs add junior Carly Chapman and freshman Bryn Janke. Chapman will aid in the attack, while Bryn Janke will assume the setting duties. Despite taking their lumps last season, Tami Janke said it’s been to the group’s benefit as the team “has a little bit more swag to them.”

“Some of that sophomore play was just fear of making a mistake, and they’ve now matured mentally to go ‘You know, I can make a mistake and still be aggressive the next ball, and play aggressive all the time,’” she said. “I think they finally understand there are going to be mistakes made, but you just have to keep playing and working hard.”

That confidence should help the Chiefs contend once again in the South Central Conference. Not that they needed any added motivation, with plenty of other contributing factors. According to Tami Janke, the team takes tons of pride in continually finishing towards the top of the six-team league, and would enjoy nothing more than to christen the new high school gym with a league title banner.

“Our conference this year is probably going to be tougher than it truly has been,” Janke said. “It’s one of those things where the conference may be strong than it’s been in a long time.”

For the Chiefs to contend with that stiff competition, Janke said the group is going to have to make sure they’re doing continually doing their job. The team’s improved volleyball knowledge should help as they aim to make the most of the condensed season.

“They used to laugh when I would say ‘You have to play every game like it’s your last,’ and now they understand that after watching what happened with our boys basketball team last year,” she said. “We just want to play and we’re setting short term goals, so our goal is to play twice next week. We want to have two competitive matches and hopefully we’ll just keep going, week-by-week, and our big goal is to win conference.”

Those title hopes got off to a good start Tuesday night as the Chiefs started slow but were able to catch fire in a season-opening 3-1 win over Wautoma.

After dropping the opening set, 25-20, Wisconsin Dells rallied to take the next three sets, sandwiching a 25-16 win in the third set between 25-22 victories to open the league season 1-0.

Hartley led the way for the Chiefs with a team-high eight blocks and six aces, while Jones racked up 37 digs. Bryn Janke doled out 12 assists and Grant had one block for the Chiefs.

Wisconsin Dells returns to action on Thursday as they head to rival Westfield.

Wisconsin Dells senior Alanna Wilson goes for a kill against the block of two Mauston defenders during a South Central Conference game last season. Wilson will help pace a Chiefs attack as they aim to get back on top of the SCC.

Wisconsin Dells senior Maddie Jones races back to save a point during a South Central Conference match against Westfield last season. Jones will take on an even larger role in the Chiefs back row this fall.