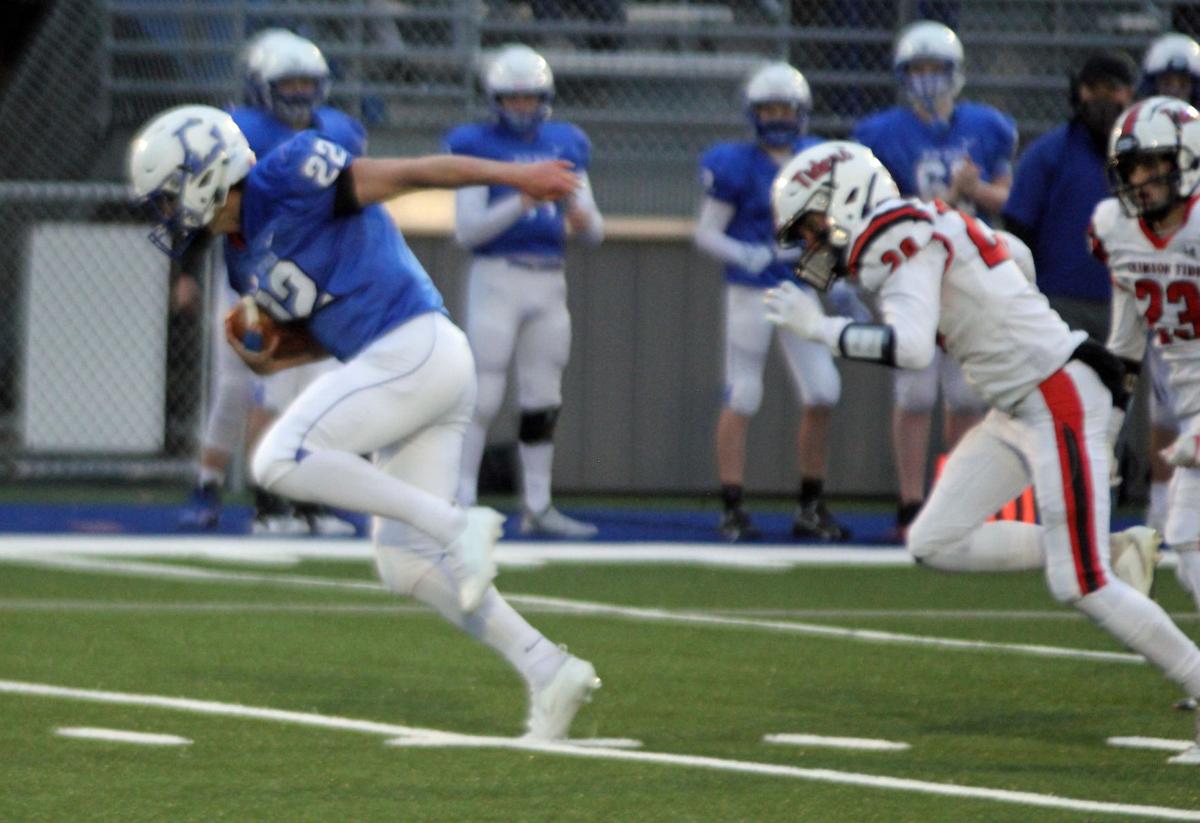 Lodi's Lucas Heyroth breaks loose for a touchdown run during the Blue Devils' season-opening 32-11 win over Edgerton on March 26. Heyroth and the Blue Devils will try to stay unbeaten this week when they host Clinton in a Rock Valley Small Conference game. 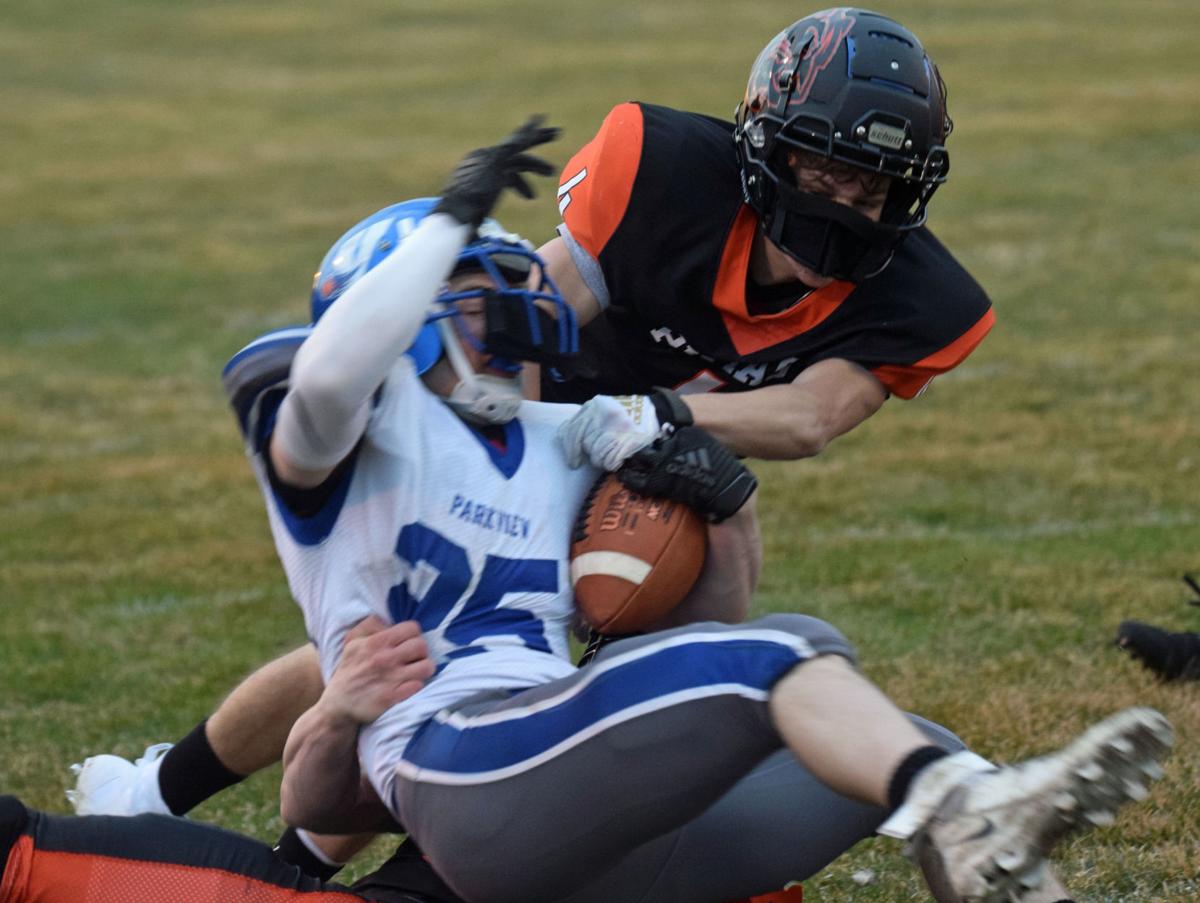 The Lodi football team has shown a bit of everything through the first two games of the alternate fall season.

After hanging 32 points behind 232 rushing yards in a season-opening win over Edgerton, the Blue Devils defense and passing game took over last week against Walworth Big Foot. Senior quarterback Quinn Faust threw for two scores and 148 yards, while the Lodi defense forced five turnovers, including three interceptions, and held the Chiefs to just 186 total yards with 53 on 27 rushes for 2 yards per attempt in an 18-6 win.

The Blue Devils will try to put everything together and remain unbeaten this week against winless Clinton. It’s been a rough start for the Cougars as they’ve lost their first two games by a combined score of 93-32, including a 46-6 drubbing at the hands of Columbus last week.

One bright spot in the loss was Mason Hesebeck, as the senior running back rushed for 120 yards and Clinton’s lone touchdown on 20 carries. The Cougars passing game, however, struggled with just 13 yards on 1-of-6 attempts with a pair of interceptions.

Clinton (0-2, 0-2 Rock Valley Small) trailed 32-0 at the break and didn’t score until Hesebeck plunged in from a yard out midway through the fourth quarter with the game already very much in hand. Slow starts have plagued the Cougars so far as they’ve trailed a combined 60-6 at the break.

It’s a weakness the Blue Devils (2-0, 2-0) will try to exploit while also trying to improve on their first half performances. Lodi led just 12-3 against the Crimson Tide and took a 12-6 advantage into the intermission against the Chiefs last week.

It hasn’t mattered however as the Blue Devils have ruled the final 24 minutes. Lodi pitched a shutout the final three quarters against Big Foot and outscored Edgerton 20-8 out of the break. Faust has helped do it all with a pair of interceptions on defense to go with 298 yards passing and two scores with two picks on 24-of-41 pass attempts.

The ground game meanwhile has been spearheaded by Lucas Heyroth as the junior has 291 yards and four TDs with one fumble on 31 touches, good for a an average of 9.4 yards per attempt. Senior Connor Faust has been the top aerial target hauling in nine catches for 144 yards and a score.

Pumas look to sharpen their claws

Following a dominant 34-6 win in its season opener against Orfordville Parkview/Albany, Poynette got taken down a peg last week.

The Pumas had no answer for New Glarus/Monticello’s aerial assault as the Glarner Knights soared to a 34-7 romp. Poynette will look to rise back up this week when it welcomes Brodhead/Juda in a Spring Large Conference tilt.

The Cardinals should be well rested after failing to find a replacement game last week following Montello/Princeton/Green Lake’s cancellation. Brodhead/Juda (1-0) will also be flying high after rallying for a convincing 33-8 win over Mt. Horeb/Barneveld in a season opener.

After falling behind 8-6 late in the first quarter, the Cardinals racked up 27 unanswered points to close out the game, including a pair of scores in the second quarter that shifted the momentum for good. Broadhead/Juda picked apart Mt. Horeb/Barneveld with a balanced attack as Cade Walker completed 9-of-11 passes for 123 yards and a score, and seven rushers combined for 176 yards and four TDs on 40 carries.

Gage Boegli did the heavy lifting with 12 touches for 92 yards, while Braden Cook toted the rock 14 times for 32 yards and three scores. The Cardinals defense also held the Vikings to 134 total yards, including negative 3 yards rushing on 22 carries, and had two interceptions.

It poses a difficult challenge for the Pumas (1-1, 1-1 Spring Large), who were passed over for 411 yards and four TDS through the air last week against the Glarner Knights. Poynette’s defense did however win the turnover battle with a fumble recovery and an interception, but struggled on offense with 189 total yards.

Junior Dylan Elsing continues to show big play potential as he leads Poynette with 137 yards rushing and a score on just nine attempts (15.2 yards/carry). Those chunk plays will be key in caging the Cardinals.

Phoenix recharged for tilt vs. Tigers

Montello/Princeton/Green Lake was among those teams to not hit the gridiron last week as it forfeited its scheduled contest against Brodhead/Juda due to player availability issues thanks to some bumps and bruises against sustained in the Phoenix’s season-opening 47-6 loss to New Glarus/Monticello.

They’re ready to go this week however, and hoping to break into the win column at Black River Falls. Like MPGL, the Tigers have yet to pick up a win this season and have struggled through two games, falling to Arcadia, 34-14, last week after a 35-0 shutout against Kewaunee on March 27.

Black River Falls (0-2) should carry some momentum into Friday however having hit pay dirt twice in the fourth quarter against the Raiders. Running back Jordan Zilmer went for 104 yards on 16 carries and added a team-high 14 tackles on defense, but the Tigers threw three picks.

MPGL (0-1) had its fair share of struggles against the Glarner Knights. The Phoenix scored first for an early 6-0 lead but never found the end zone again and will be hungry to find pay dirt once more against the Tigers.

The Poynette football team atoned for its difficult close to the 2019 season.

As much as a sound rushing attack has been the staple of the Lodi football team the better part of the last decade, its defense has been nothi…

Lodi's Lucas Heyroth breaks loose for a touchdown run during the Blue Devils' season-opening 32-11 win over Edgerton on March 26. Heyroth and the Blue Devils will try to stay unbeaten this week when they host Clinton in a Rock Valley Small Conference game.