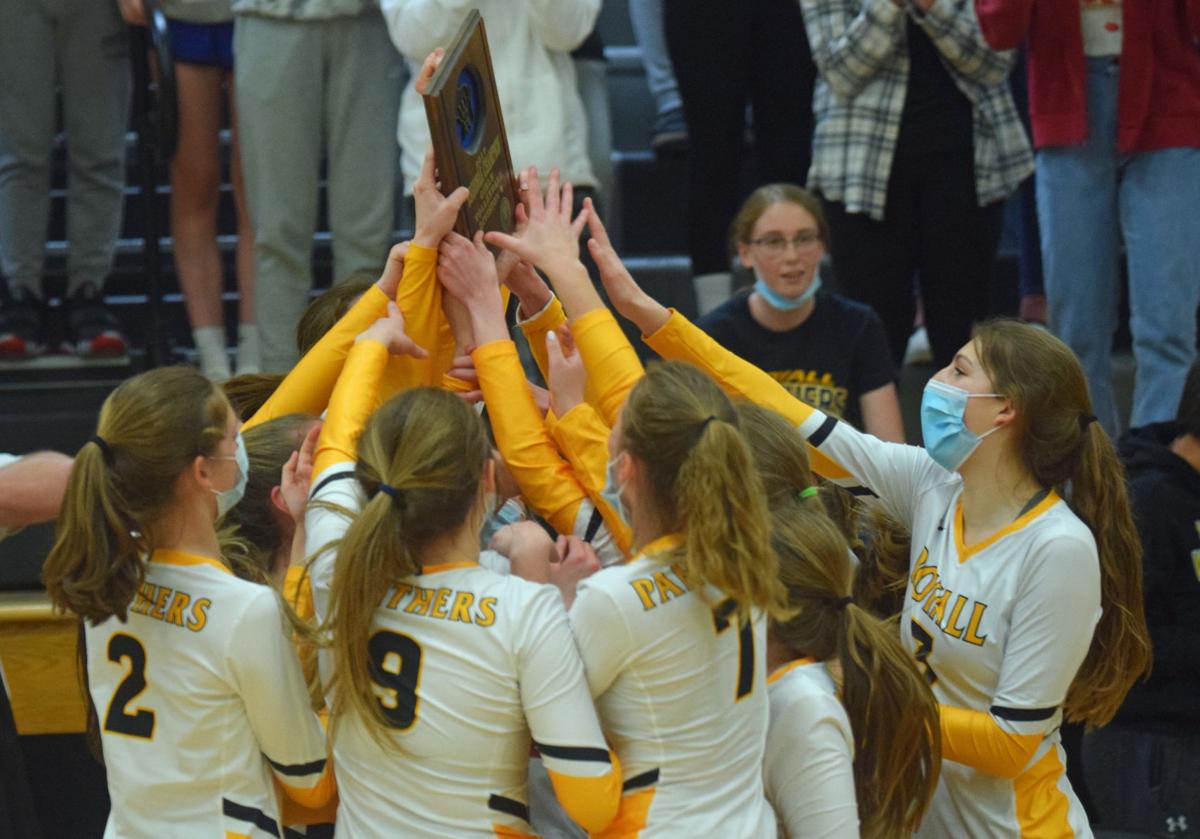 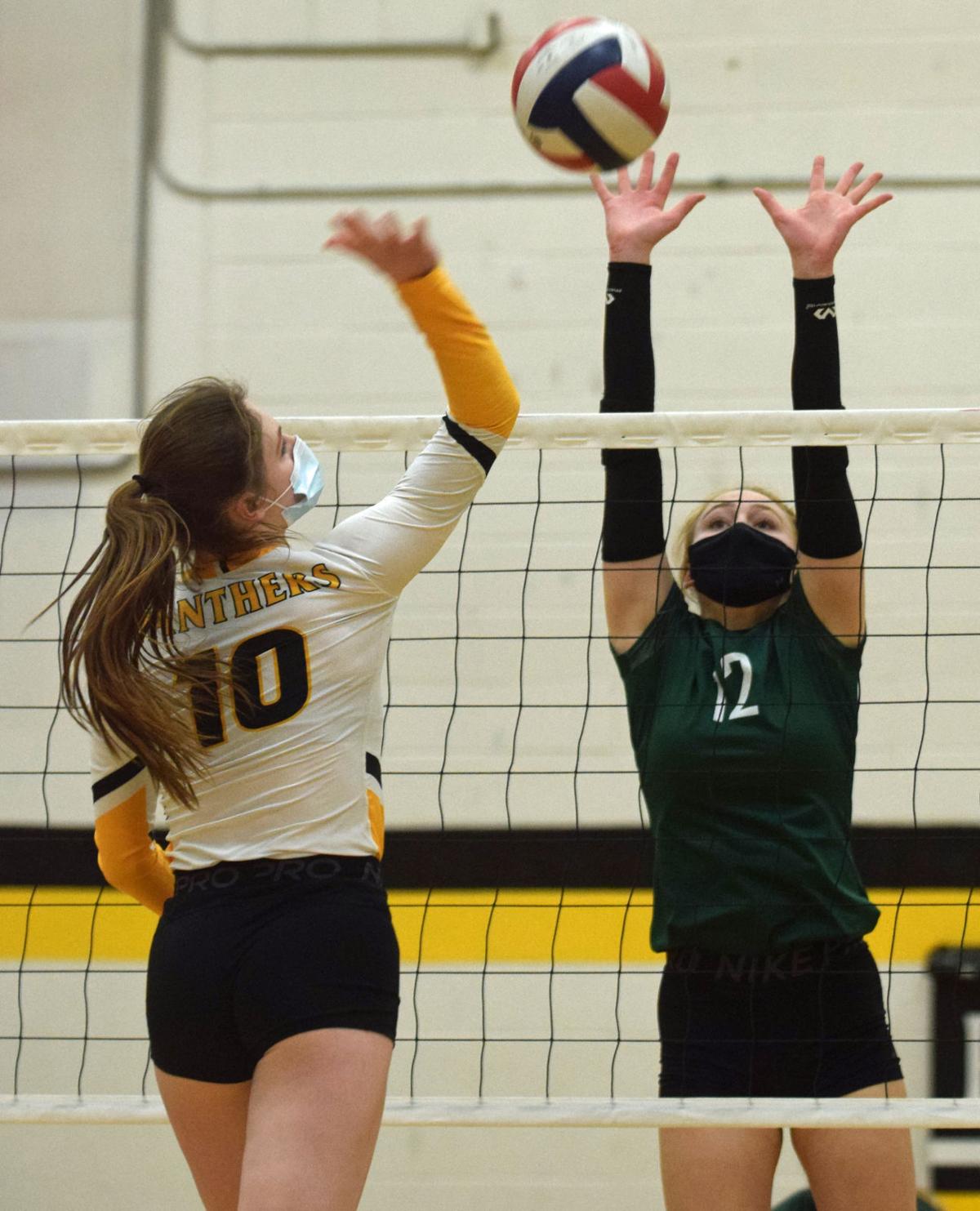 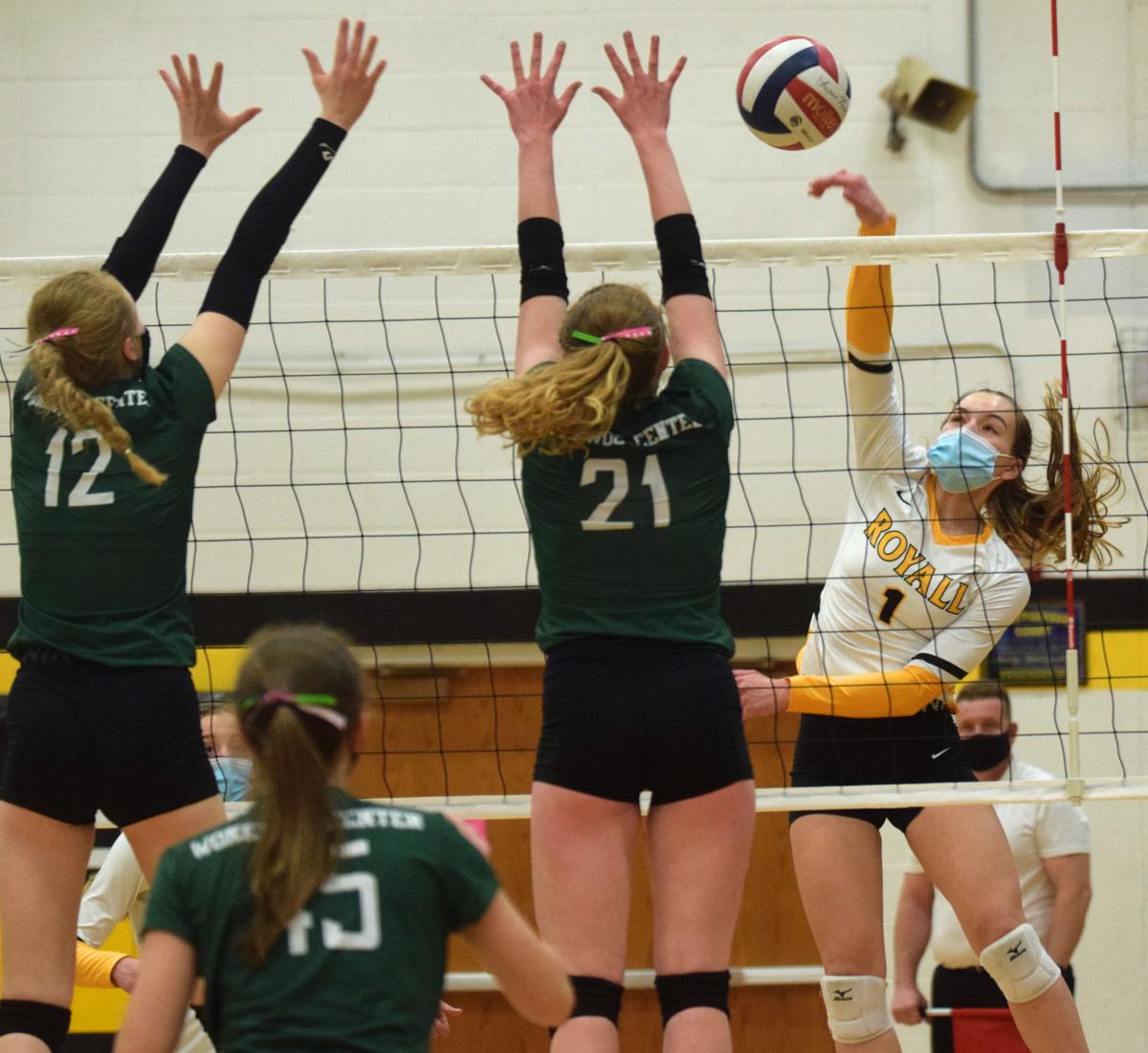 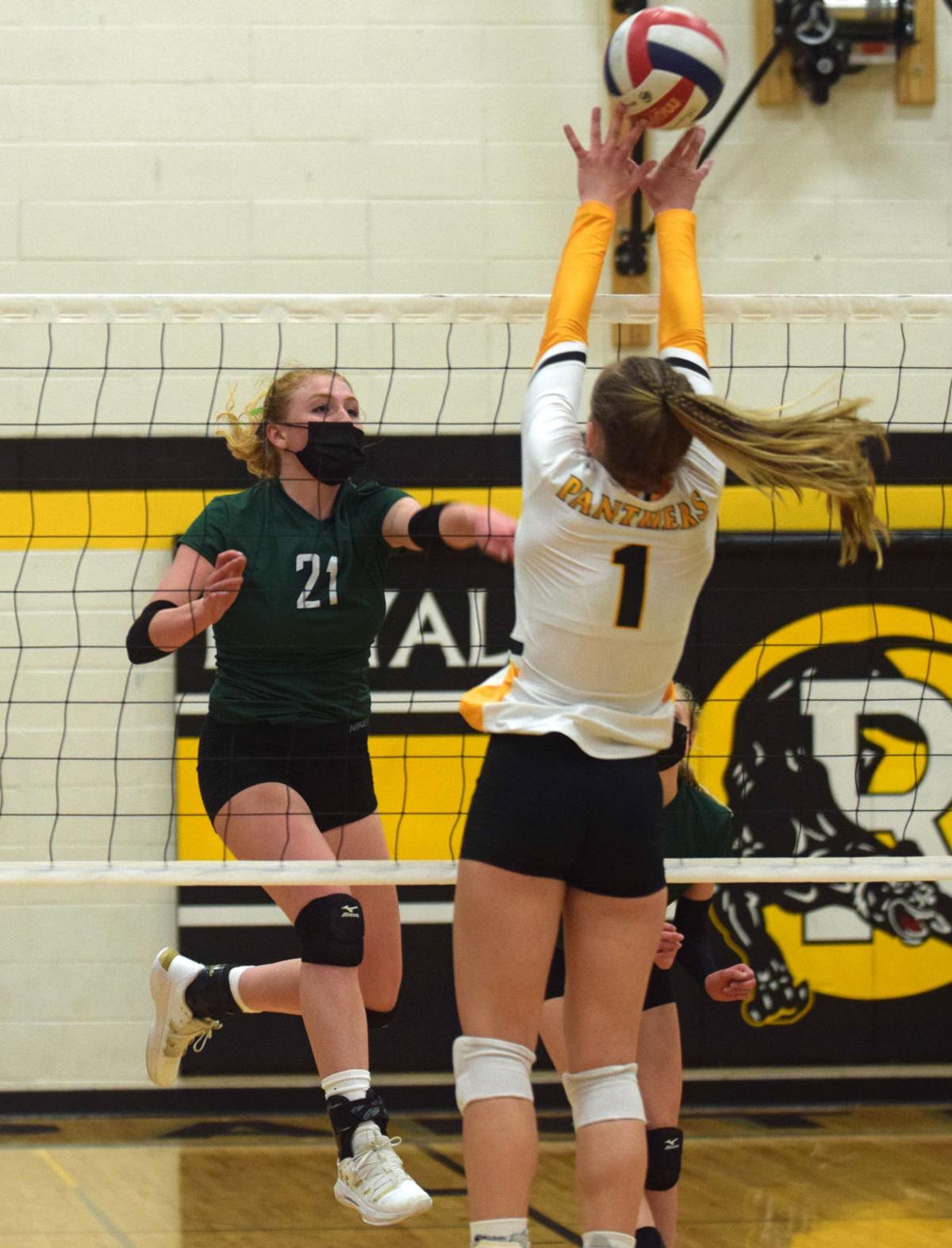 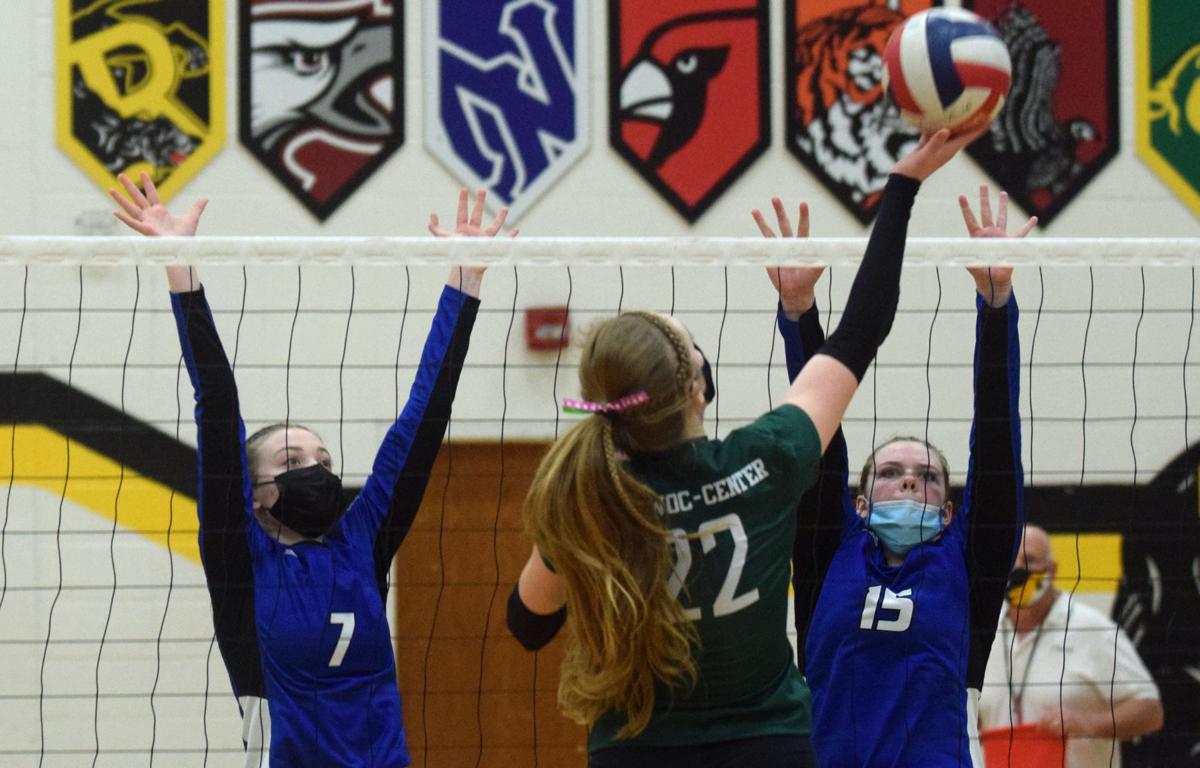 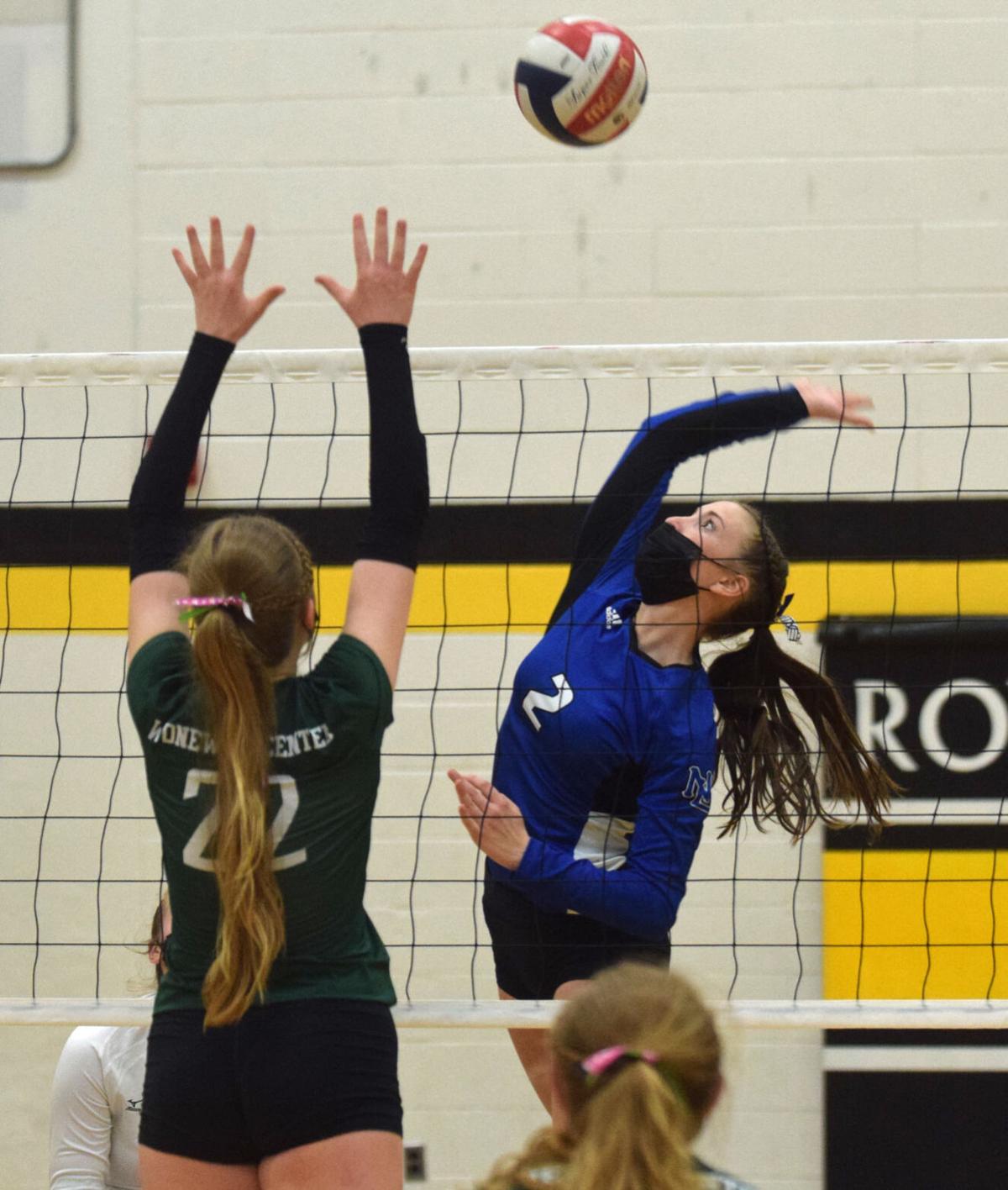 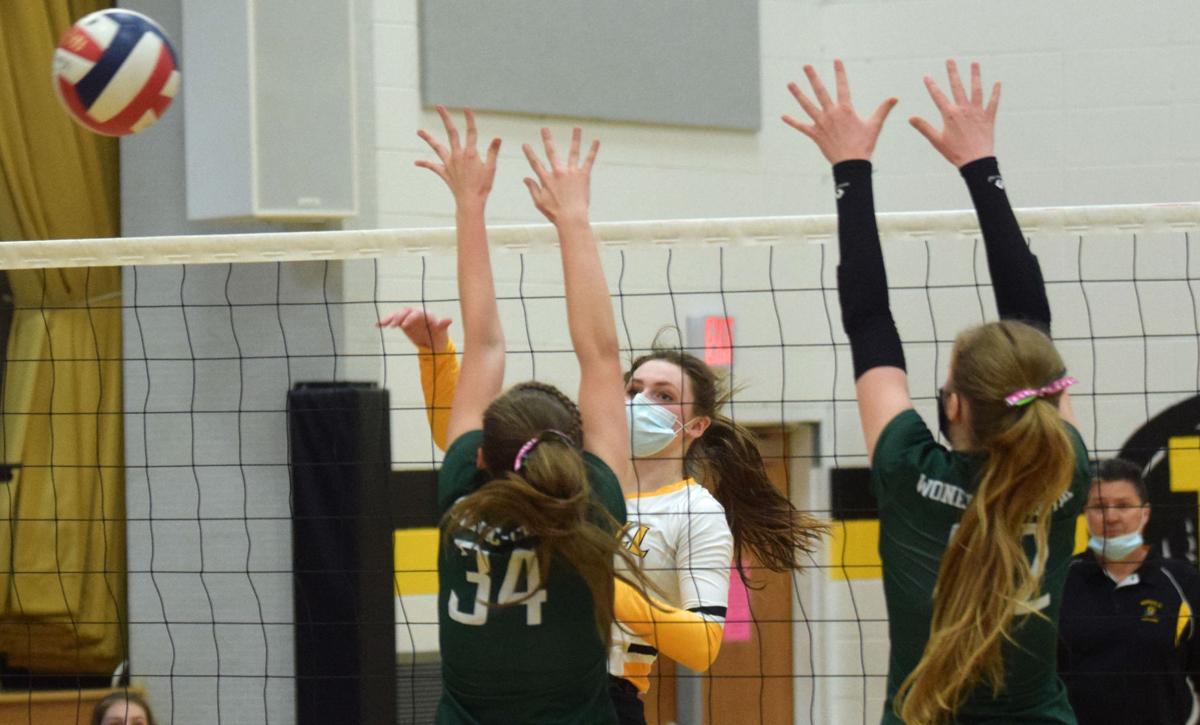 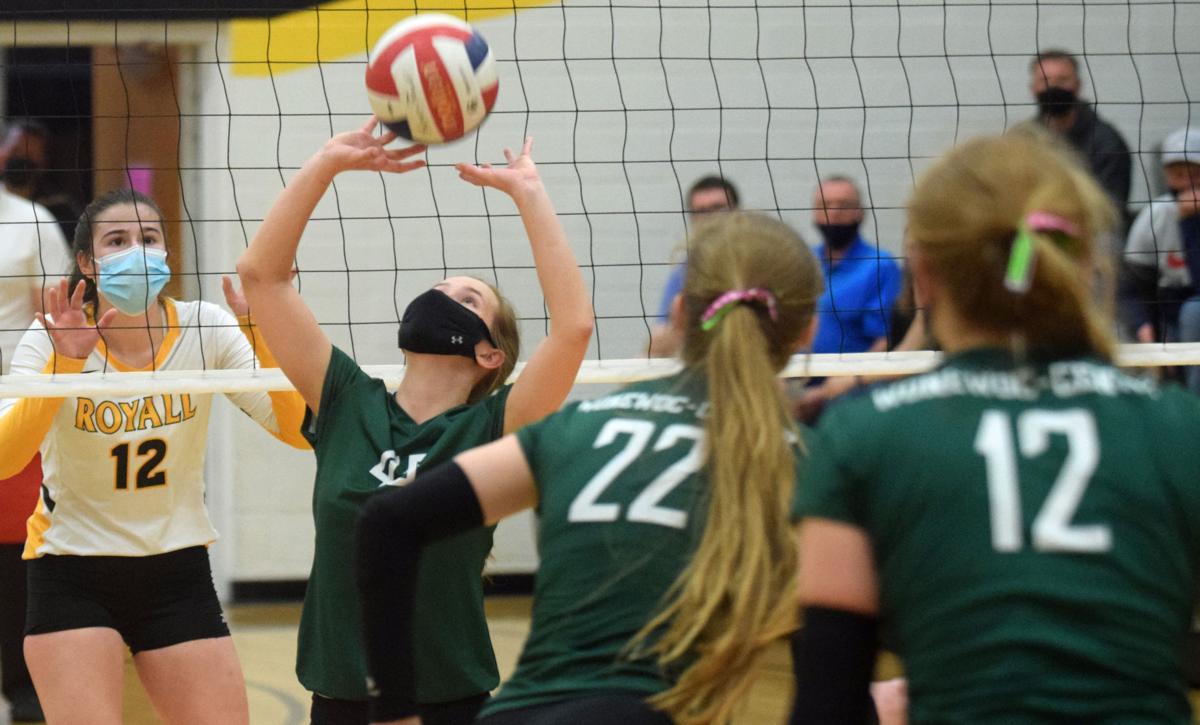 From conference to regional and sectional titles, each success is listed year by year. While it was forced to wait until this spring to compete, the goal of the Royall volleyball team remained the same: put three numbers on the banner.

Following the program’s first Scenic Bluffs Conference title in four years, the Panthers tacked on the second of their trio on Saturday. After sweeping Necedah, Royall fended off Wonewoc-Center in four sets to capture a second straight regional crown at a WIAA Division 2 alternate fall regional.

The Panthers (17-2) received the No. 1 seed for Tuesday’s Div. 2 sectional and will face fourth-seeded Belleville at La Crosse Logan as the pursuit of the program’s first-ever trip to state continues.

“It’s huge,” said Royall senior Cheyenne Harris, who was one of three seniors that were part of the Panthers’ 2017 SBC and regional championship team.

“It’s an amazing feeling to do it when we were so young and then again with a whole, completely new team as a senior.”

The Panthers’ run to a third regional championship in five years wasn’t easy however, as the Wolves truly made them work. After dueling in a five-set thriller in their second meeting of the regular season, Wonewoc-Center forced Royall to grind out wins of 25-17 and 25-22 in the opening two sets.

The Wolves (13-4) kept pushing though, and similar to that five-set belter, which Wonewoc-Center rallied from 0-2 down, they edged out a 25-18 win in the third set. As impactful as it was to claw within a set, it may have done more for the Panthers.

“After we dropped that third one, it hit us that ‘If we drop the next two, it’ll be our last game,’ and we didn’t want that to happen,” Royall senior Molly Crneckiy said. “A different intensity came out that game.”

Following a seesaw start, that featured no lead larger than five, the Wolves pulled within 14-11 after a kill from junior Nicole Totzke. Royall immediately countered with a combo block from freshman Marah Gruen and Harris, and a solo stuff from senior Emma Gruen to extend the lead back to five at 16-11.

A net violation from the Panthers gave the Wolves a bit of life but Royall quickly wiped it away as they went on to finish the game on a 9-0 run. Emma Gruen, who broke 1,000 career kills in the win, tallied three putaways in the final stretch, including the match-winner to send the Panthers into pandemonium.

“Whenever we’ve needed something, all year, we’d go to her,” Royall coach Craig Baeseman said. “Last year she was the runner up Player of the Year (in the SBC). We’ll see how it goes this year, but I wouldn’t trade her for anyone in the world.”

Despite coming up on the short end of things, Wonewoc-Center coach Nikki Justman lauded her team’s effort. While she wishes the Wolves “could have pulled out a little bit more,”Justman believes emotions could have gotten the better of her team, and the Panthers are just that good.

“They blocked the heck out of us, brought up a lot of balls that would normally would have fallen. I just thought they played really well and we didn’t,” she said.

Both teams were at their best in the opening two sets, but ultimately the Panthers pulled ahead in both. The foes tied eight times through the opening stages of the first stanza, lastly at 15 after a Royall hitting error.

The rest of the set belonged to Royall however, as it rattled off a 10-2 run to finish off the set, including two kills and an ace from Emma Gruen, and a crucial block and kill from senior Jessica Brueggeman. The second followed a similar start as the teams traded runs once again until tying at 13 after a kill by Wonewoc-Center freshman Kelsey Justman.

Royall inched in front with a 5-0 mini-run, but the Wolves didn’t go quietly as they punched back with a 7-2 run of their own, including kills from senior Kailey Ertel, junior Shelby Justman and junior Lauren Johnson, as well as a Totzke ace, to tie things at 20.

Wonewoc-Center couldn’t get the lead though, as Royall went on to finish things out with a 5-2 run for a 25-22 win. The Wolves nearly kept things alive as a pancake dig by Kelsey Justman kept up the would-be kill, but Wonewoc-Center failed to return the ball off the save.

Baeseman credited the Panthers’ focus to their ability to close out the opening two sets, while Harris didn’t’ downplay the electricity in the gym.

“Our energy; our energy from the crowd, our parents, the bench and our young players,” she said. “Everyone looked like they had been on the floor their entire lives, playing really well with a lot of energy.”

Needing a win, the Wolves didn’t mess around in the third set as they opened on a 12-6 run and ultimately cruised to a 25-18 win. After two tight losses, Nikki Justman was happy to see the Wolves respond in the third as they continued to improve on their “Don’t give up,” mindset, but in the end the Panthers were too much.

For the Wolves, Ertel had 10 kills and eight blocks, and Shelby Justman tallied 10 kills and four aces. Freshman Jaelyn Stowe dished out 27 assists and Totzke had nine kills and eight blocks of her own. Wonewoc-Center’s success, which included a second-place finish in the Scenic Bluffs Conference and an 11-game winning streak, should translate well to the fall, especially after losing just two seniors.

“I hope they remember that (success), and that they can do it and beat some of those bigger schools,” Nikki Justman said. “Like Cashton, and we beat Royall and Bangor this year, so that’s a good thing that they know it can be done and not always the Goliaths that will win.”

As for the Panthers Emma and Marah Gruen each tallied 16 kills in the win while the former had three blocks and the latter three aces. Senior Molly Crneckiy finished the day with 42 assists. The road isn’t finished as they head to sectionals, and regardless of where that leads, the objective is simple for Baeseman.

“We just have to execute and do the things we know how to do,” he said.

Before falling to the Panthers, Wonewoc-Center had its hands full in the second of the two semifinals against New Lisbon.

The Wolves made easy work of the first set but the Rockets were much harder to handle in the final two, but ultimately it was Wonewoc-Center that came away with a 25-9, 25-18, 25-23 sweep. Kelsey Justman and Totzke had 12 and 11 kills, respectively, while Stowe had 21 assists for the Wolves.

The Rockets meanwhile got six kills each from junior Libby Rogers and senior Amelia Retzlaff, with the former leading the way with seven digs.

“They were able to get it going and battle, and I’m very proud of the effort they had here today,” New Lisbon coach Scott Lenz said.

It took some time for the Rockets to get off the ground however, as Wonewoc-Center commanded the first set, including a 19-4 run after dropping the first two points. New Lisbon got off the ground much easier in the second set, as it forced seven ties before ultimately taking a 17-16 after a ball handling error by the Wolves.

Wonewoc-Center righted the ship however, closing the set on a 9-1 run, including three Kelsey Justman kills, for a two-sets-to-none lead. Desperate to stay alive, the Rockets again accelerated out of the gates before claiming an 18-15 lead.

The teams proceeded to trade the lead three times as a kill from Rogers gave the Rockets their final advantage of the night at 22-21. Wonewoc-Center responded with three straight points, including two more Kelsey Justman kill, and after a kill from Retzlaff, a New Lisbon hitting error gave the Wolves the win.

Limiting errors had been a strength for the Rockets (7-8) all season long, but a lack of efficiency, especially from the service line, came back to hurt them. There is room for optimism however, and Lenz is confident about the program moving forward.

“There’s a lot of ability and a lot of potential for growth next year, and we had a lot of young girls get some playing time throughout this year. I think that bodes well for them moving forward, absolutely,” he said.

“This one’s still sinking in, but I think there’s reason for some optimism moving forward with the Rockets volleyball program.”

Before fending off the Wolves, Royall made easy work of Necedah in the day’s opening regional semifinal.

Marah Gruen led a balanced attack as she tallied nine kills, while Emma Gruen notched seven and both Harris and Brueggeman chipped in five apiece. Crneckiy dished out 25 assists and in the process broke the 2,000 assist mark for her career, while junior Maycie Vierck had five of the Panthers’ 13 aces.

COLUMBUS — The Columbus High School volleyball team got its opportunity this spring.

Following a five-set upset loss to Wonewoc-Center, the Royall volleyball team needed to win each of its final four regular season games to kee…

BEAVER DAM — Facing the top-seeded team, even at the state tournament, can be a daunting task.

Emma Gruen and the Royall prep volleyball team made their mark on every level of the alternate fall volleyball season.