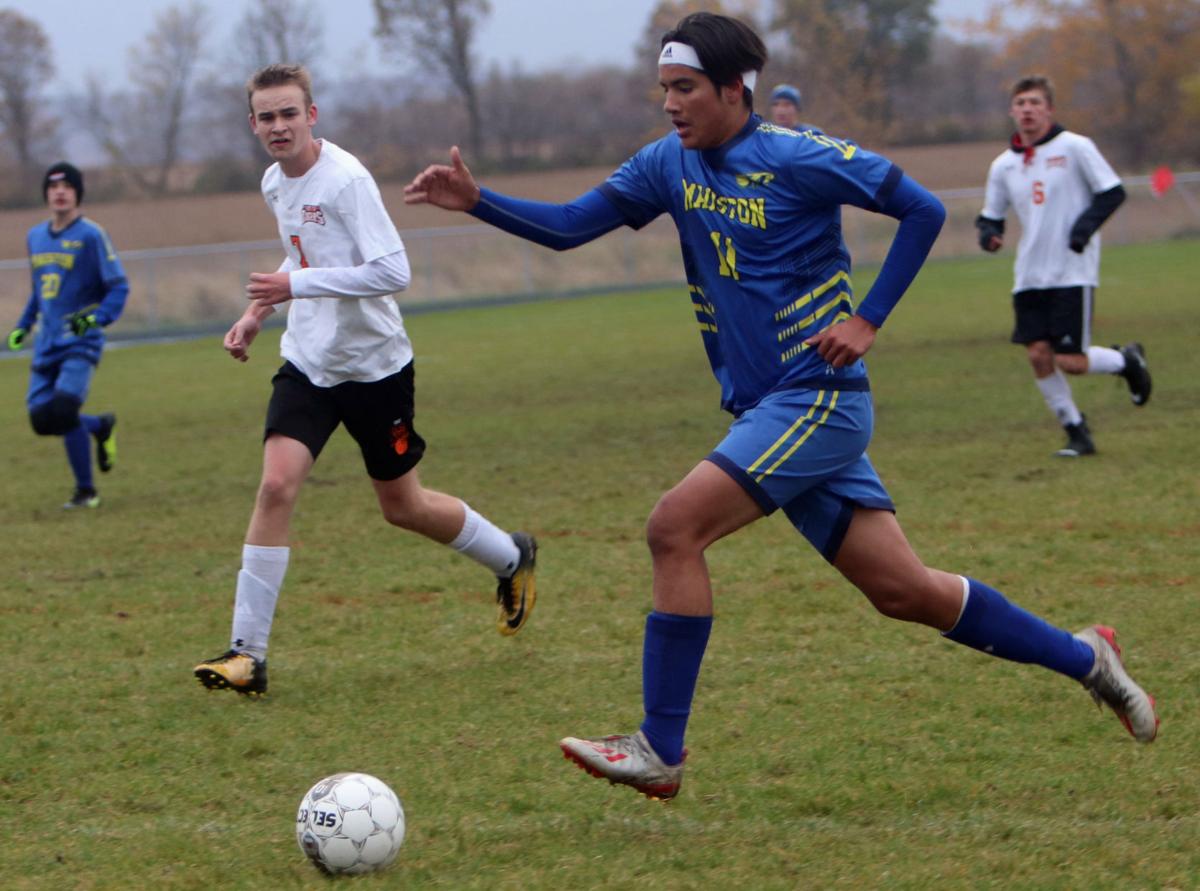 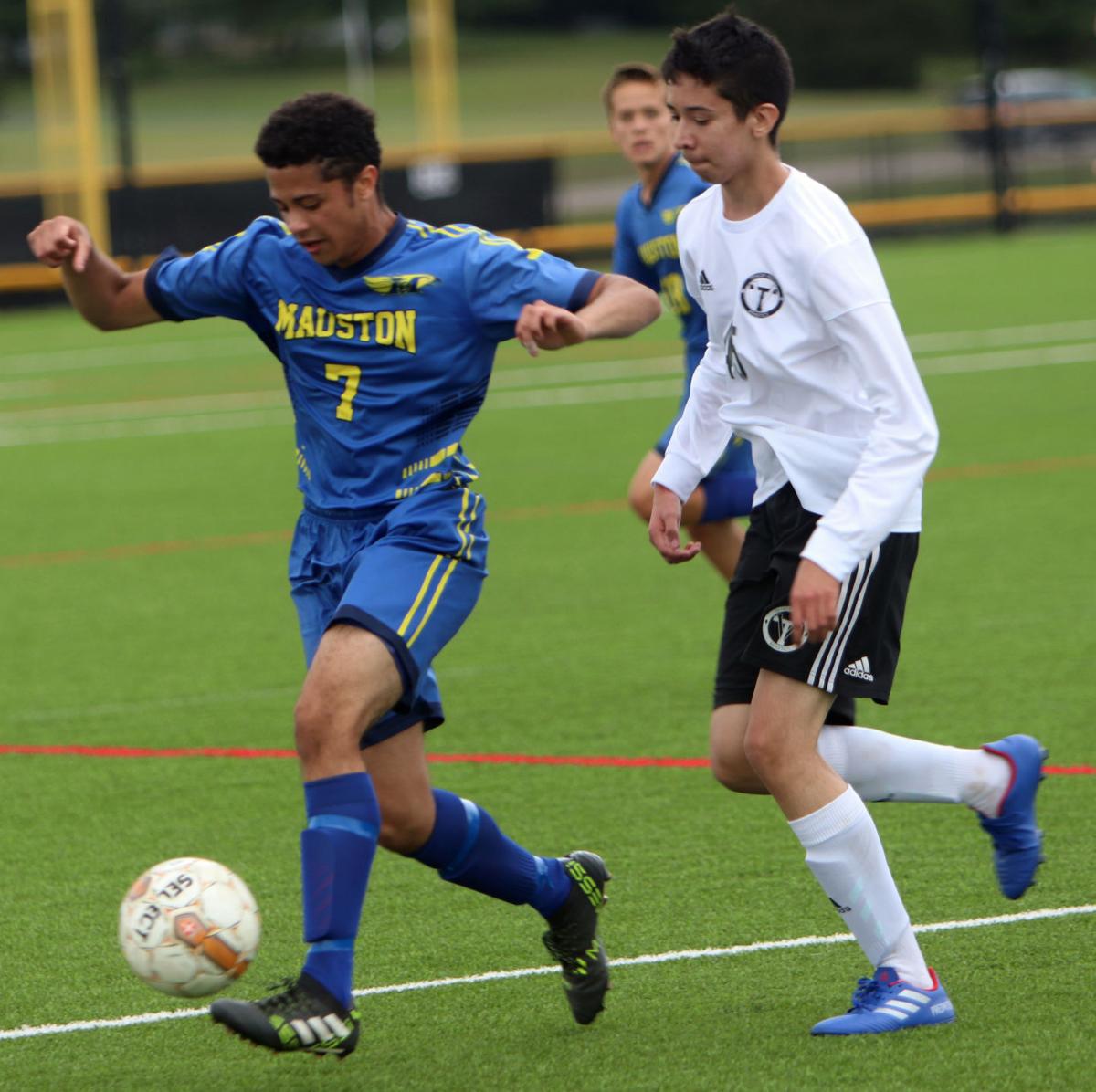 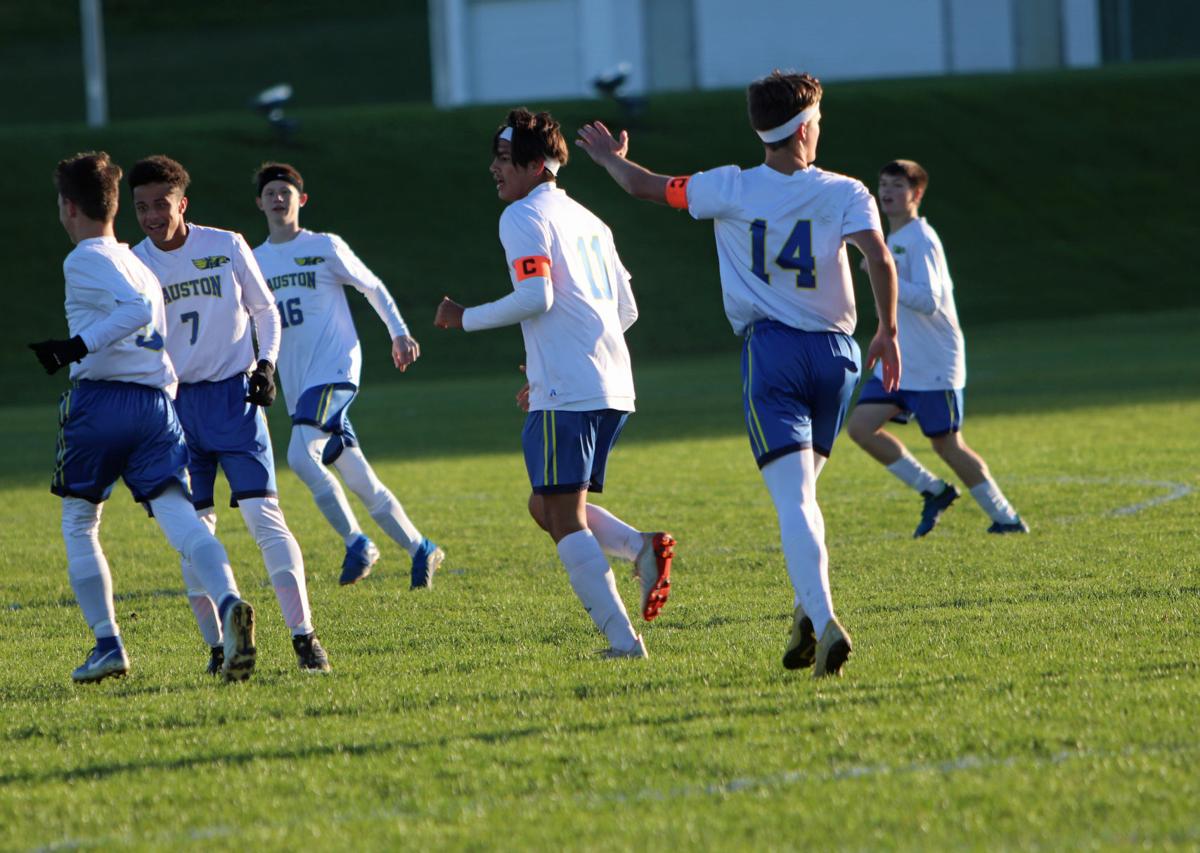 Mauston players celebrate following a goal during their 3-2 win over Reedsburg last season. The Golden Eagles must replace five seniors, including three All-South Central Conference picks, but bring back a handful of returnees from a team that went 7-13-1 last year. 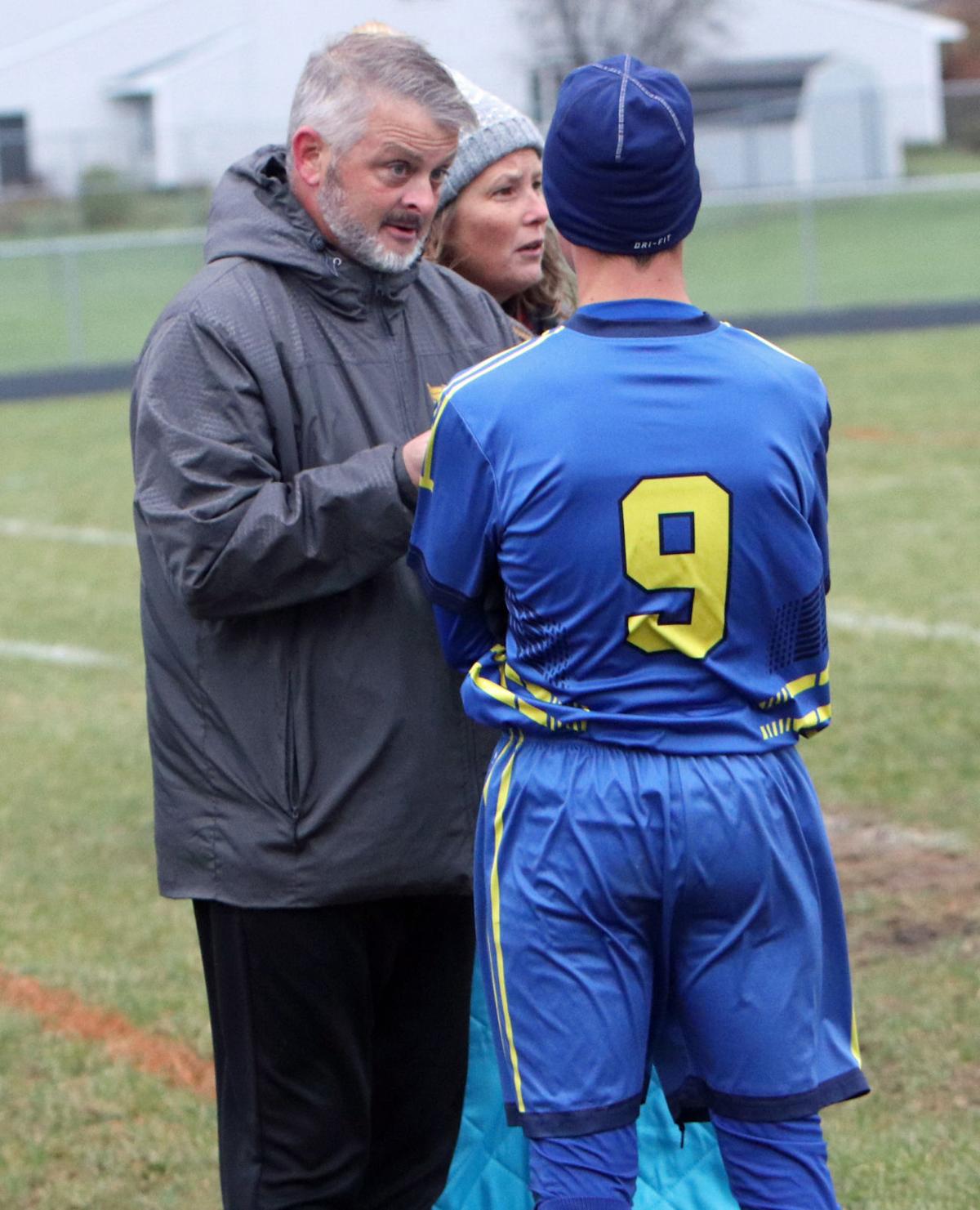 Mauston coach Jason Oliver chats with junior Vincent Bellock during the Golden Eagles' 7-0 win over Black River Falls/Melrose-Mindoro in a Division 3 regional quarterfinal game last fall. Oliver enters his second season at the helm of the Golden Eagles this fall.

The Golden Eagles finished under .500 overall, but went 5-4-0 in South Central Conference play. Mauston won its Division 3 regional quarterfinal match over Black River Falls/Melrose-Mindoro, 7-0, only to get blanked by perennial state contender Delavan-Darien, 20-0, in the regional semis.

Needing to replace six seniors, including three all-league picks, provides a tough task for Oliver in year two, but the coach is confident the Eagles have the right returning pieces. Regardless, it’s good to be back on the pitch, even if there are new hurdles to try and overcome.

“It’s much better but there’s so much now that we now have to pay attention to, and it’s unfortunate because a lot of things we normally would do are almost impossible this year,” Oliver said at the team’s practice on Sept. 10, noting the team’s inability to watch film together because of tight space.

“We’re trying to figure out ways around how to teach the kids what they did, how they can modify and improve. The first week of practice we’re already getting into game situations because one, we don’t have enough practice time since we started late, and two, our first game is already next week.”

On the pitch, the biggest challenge for Mauston will be filling the void left by six seniors, including a trio of All-South Central Conference picks.

With only 20 players on the roster, Jason Oliver said the group is still ironing out whether or not to field both a varsity and JV team. For Oliver, that was one of the biggest challenges last season, as he and his coaching staff sought to give the team’s the same skills.

As some skillful seniors have left gaps in varsity lineup, Oliver is now filling those holes.

“With the seniors who left being mostly starters, we’re filling in some gaps right now and a lot of kids don’t have that confidence yet. It’s just that they haven’t played a lot, so I think as soon as they get more into game time, they’re all a year older,” he said.

“It changes the game every year; my son grew five inches since last year, so if you think about all of the physical changes they’re doing, it’s not just figuring out the field. It’s figuring out how you’re going to move your body now because it’s so different nowadays.”

With skills continuing to develop, Oliver said the Golden Eagles will rely on a formation-by-committee. While he said there will be “keystones in the formation,” Oliver said two to three different players will be at a position rotating in and out.

“That’s my coaching philosophy; I’d rather put somebody in, have them go, coach them in what they’re supposed to do and then bring them out,” he said. “Put another person in to do something different, coach that guy and just keep that rotation.”

Oliver said the group is filled with athletic players, including those who played offense last year that are shining on defense this season. That duality should benefit the Golden Eagles this fall as they explore the team’s new formation.

“It’s kind of like football; if you run routes, you know what they are, but it doesn’t get creative until you’re out there on the field,” Oliver said.

“The same thing for positions, if they’re in this position and see something happening, they have to know how to be creative with it, and that’s what I’m hoping they get out of this (season). They know all the positions, now it’s how you can be creative in those positions.”

The other learning curve facing the Eagles has been dealing with the new COVID-19 safety protocols. While annoying as wearing a facial covering can be, Oliver and his staff are pushing the aspect of not being affected by it on the players, while “trying to be safe and making sure they’re taking the right precautions.”

At the end of the day, Oliver is just hopeful the boys can get as much as they can out of the condensed, 13-game season, starting with Thursday’s trip to Nekoosa.

“It should be fun, I just hope it gives (the boys) enough time to play and learn. The first few games are always hard; you’re learning, trying to figure out how to work in a new formation, with somebody new right next to you,” he said.

“I just hope we get a few games in so they can feel confident and feel like they accomplished something, even if we don’t finish. I hope we finish, but that’s my minimal.”

The Golden Eagles knew they were in for a daunting challenge going up against one of the top teams in Wisconsin. That fear became a reality in…

Having already drubbed Black River Falls/Melrose-Mindoro twice this season, Mauston knew it had a favorable path to victory in the opening rou…

Mauston players celebrate following a goal during their 3-2 win over Reedsburg last season. The Golden Eagles must replace five seniors, including three All-South Central Conference picks, but bring back a handful of returnees from a team that went 7-13-1 last year.

Mauston coach Jason Oliver chats with junior Vincent Bellock during the Golden Eagles' 7-0 win over Black River Falls/Melrose-Mindoro in a Division 3 regional quarterfinal game last fall. Oliver enters his second season at the helm of the Golden Eagles this fall.