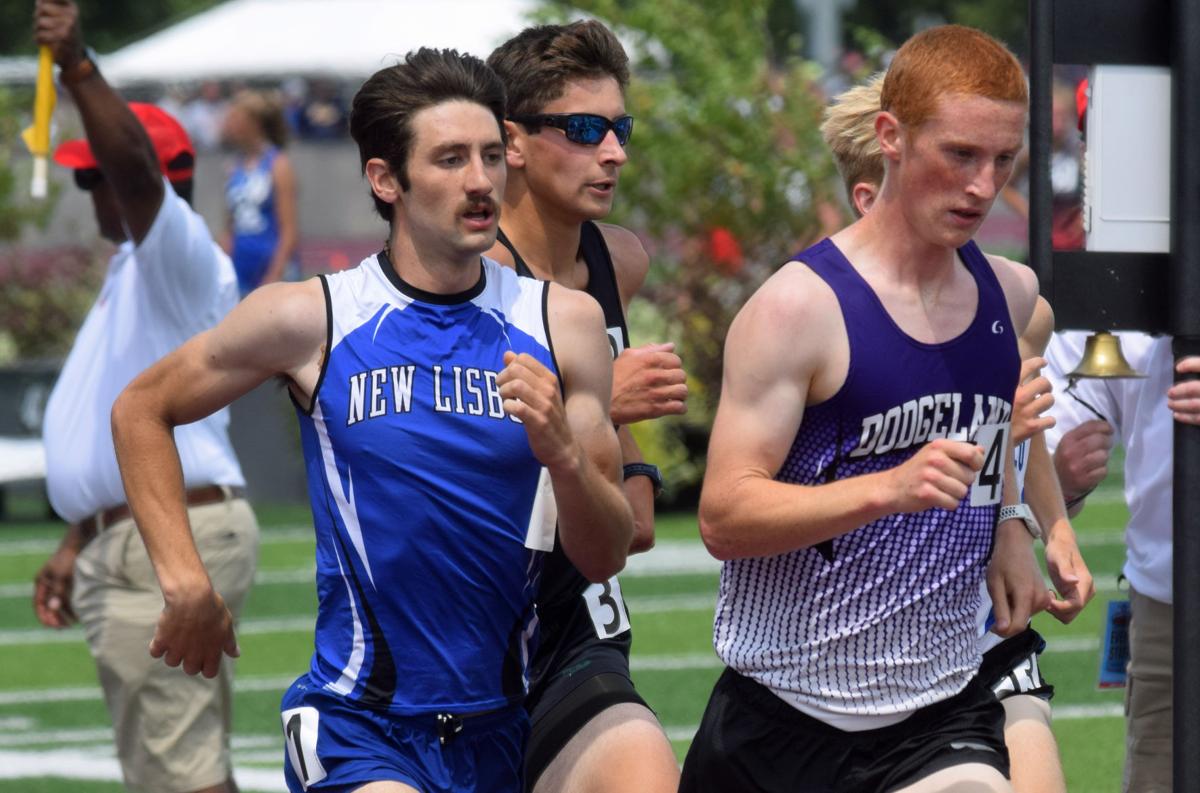 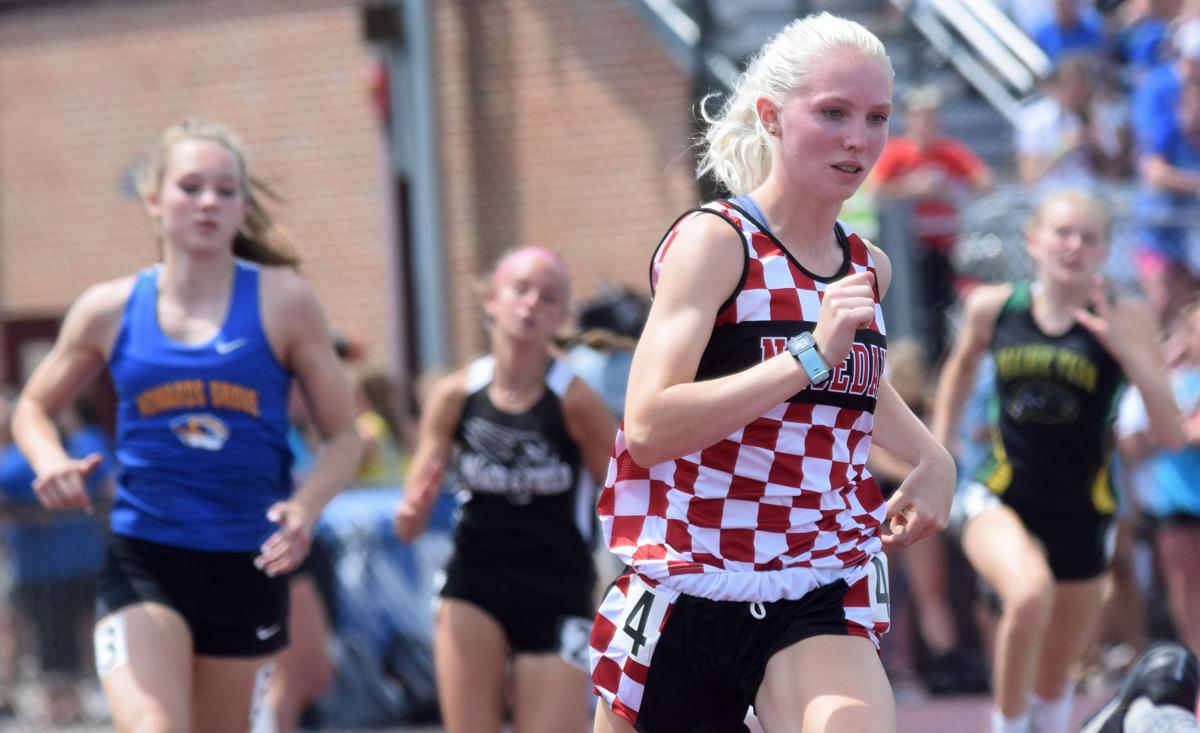 Necedah senior Anetha Vogele heads into the first turn during the girls 400-meter dash at the WIAA Division 3 state track and field championships on Thursday at Veterans Memorial Stadium at UW-La Crosse. 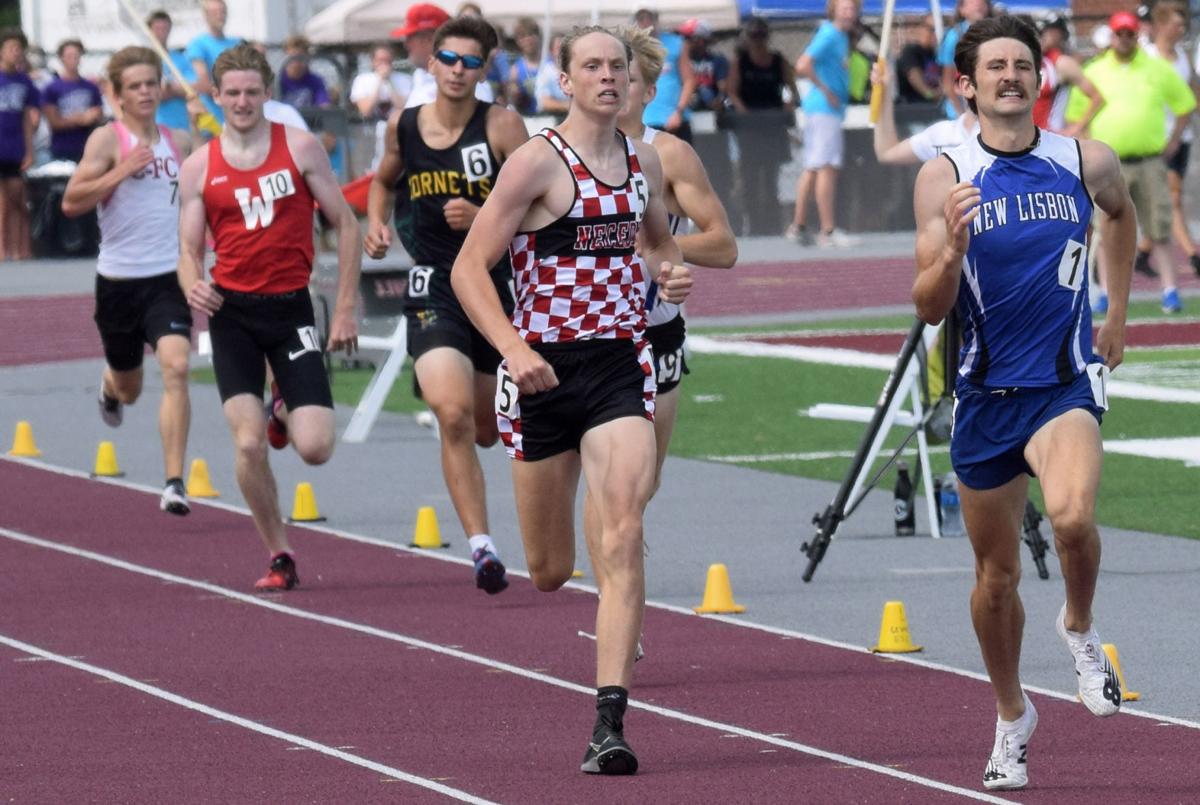 Necedah senior Isaiah Herried battles to catch New Lisbon's Owen Jones as they head to the finish line during the boys 800-meter run at the WIAA Division 3 state track and field championships on Thursday at Veterans Memorial Stadium at UW-La Crosse. 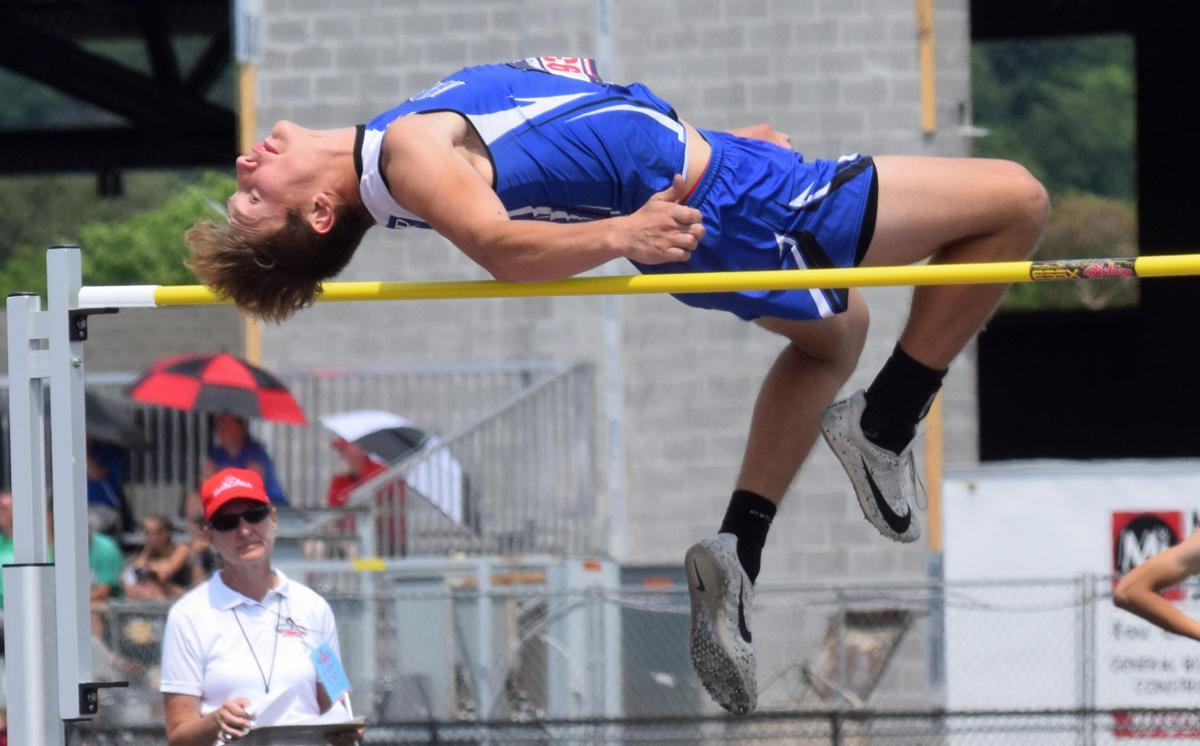 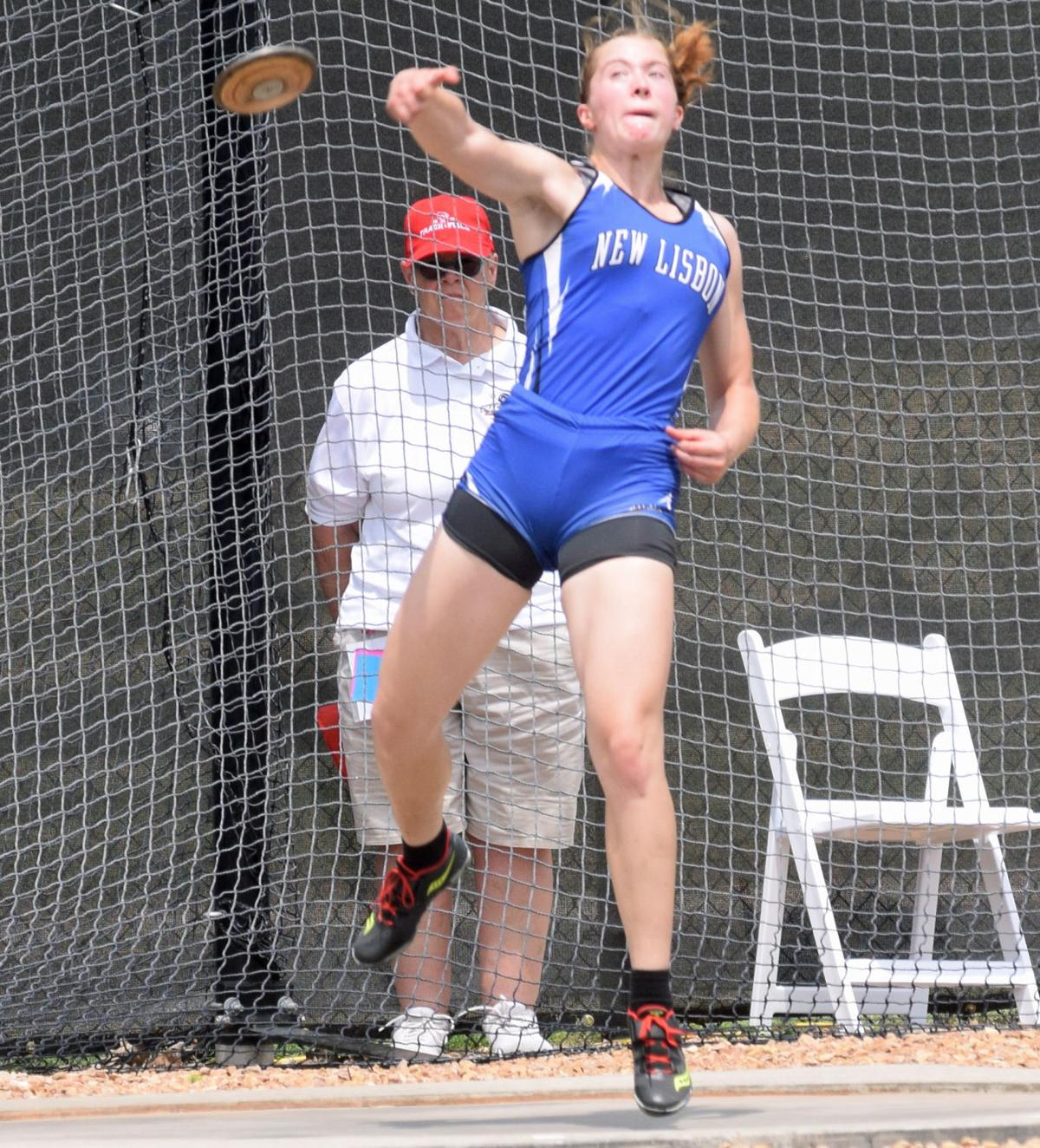 New Lisbon's Jaiden Hart releases an attempt during the girls discus at the WIAA Division 3 state track and field championships on Thursday at Veterans Memorial Stadium at UW-La Crosse.

Along with eliciting personal record times and thrilling moments, it can foster friendships and connections that will last for years to come.

Facing off against one another in the Scenic Bluffs Conference for the last four years has done that for New Lisbon senior Owen Jones and Necedah senior Isaiah Herried. So much so that it made for a special moment as the pair competed against each other one final time at the WIAA Division 3 state track and field championships on Thursday at Veterans Memorial Stadium.

“I think it’s more of a team thing than a competition thing. We treat each other like teammates and are always there for each other, same thing for cross country,” Jones said. “Same thing, honestly, for everything we do. We’re competitive when we’re on the track, but it’s family and we’re friends.”

It was just that when the two competed against the state’s best in the boys 800-meter run. In a packed field, the top six were separated by less than four seconds, rounded out by the pair of Jones and Herried.

The Cardinals senior held a slight advantage heading into the second lap, leading by just two-hundredths of a second, and it was anyone’s race to win coming down the home stretch. In the end however, it was the Rockets’ man that surged ahead as Jones pulled in front with a time of 1 minute, 59.70 seconds, just ahead of Herried (2:00.02).

While it was Jones, who earlier finished third in the boys 1,600 with a time of 4:29.17, who edged out the win in the pair’s final race against one another, both were just thrilled to get the chance to compete at state after losing last season due to the pandemic.

“I’ve worked really hard in the past, so I feel like it’s just so nice to be here, especially after missing last year after just training for those long months,” said Herried, who also qualified in the boys triple jump, finishing 13th with a leap of 41 feet, 5¼ inches.

“It feels good, I’ll tell you that much,” added Jones of closing out his career at state.

Along with their spirited friendship and competition, the pair sported impressive looks, with Jones flaunting a rugged mustache ala Tom Selleck, while Herried touting a man bun.

Herried admitted he wished his hair could have gone longer, “but it didn’t happen this year because my hair kind of stunted growth,” while Jones regrew out his mustache after sporting the same mouser from the cross country season that net him a fifth-place finish at state last fall.

“Last year I grew it out for state and ‘Use what you’ve been stashing’ was the motto there, but a week into the season I’m like ‘I’m going to grow it out again. See how long I can get it. It’ll look intimidating,’” he said.

The pair of Jones and Herried weren’t alone in hitting the podium as Necedah senior Anetha Vogele and New Lisbon sophomore Nikita Shankle each made the medal stand in their state championships debut.

Vogele scored a pair of third-place finishes in the girls 200- and 400-meter dashes, while Shankle soared to a fourth-place finish in the boys high jump.

“I’m so thrilled to have this opportunity. I didn’t run my PRs today like I wanted to, but I’m happy with what I did,” Vogele said of the pair of bronze medals.

“I was trying to get on the podium, and I’m a sophomore going on my junior year, so that’s pretty big for me,” Shankle added of his podium performance.

Vogele entered with the top seed in the 200 but slipped back in the morning’s preliminaries, taking sixth ahead of the finals. She made up for it later however, using the 45-minte break — added to accommodate for just Div. 3 competing alone on the first of the restructured three-day competition — to reset ahead of a third-place finish in the finals with a time of 27.17 seconds.

Vogele’s improvement in the 200 was preceded by her third-place finish in the 400, as she crossed the finish line at :59.69 to help set the table for her 200 finals race later.

“With the race at a different time of day, it kind of messed with me, but I think throughout it I did a little bit better and got into it,” she said of the different structure.

Similarly, Shankle had to wait to compete as the boys high jump started after the conclusion of the girls high jump earlier in the morning and afternoon. It didn’t shake the sophomore’s confidence however, as he cleared the opening four heights on his first attempt before narrowly topping 6 feet, 3 inches on his third and final attempt as one of only four competitors to clear the top height.

Shankle couldn’t keep going though, as he followed suit with the remaining competitors, bowing out at 6-4 on all three attempts. After going through some struggles at sectionals, Shankle said the strong start was a major benefit and the podium finish gives him plenty of confidence looking ahead to next year.

Vogele meanwhile is finished for her prep career, but with a future at UW-Stevens Point, she said the pair of medals “will be great for college to get it under my belt.” She also noted how special it was to share in this experience with Herried as two first-time qualifiers.

“I’m just so happy we got to do that, especially for Necedah and for the team. I’m so happy he got on the podium today and we were able to do that together,” she said.

Coupled with the four podium finishers, New Lisbon’s Jaiden Hart made her state championship debut in the girls discus. Entering seeded 15th, the Rockets senior held onto her position as he opening throw of 95 feet, 3 inches net her a 15th-place finish ahead of Pardeeville’s Abigail Breneman (85-8) and Unity’s Emma Johnson (74-10).

Just 3½ months ago, Dylan Kuehl helped the Hustisford boys basketball team make history at the La Crosse Center, as the Falcons captured their…

Necedah senior Anetha Vogele heads into the first turn during the girls 400-meter dash at the WIAA Division 3 state track and field championships on Thursday at Veterans Memorial Stadium at UW-La Crosse.

Necedah senior Isaiah Herried battles to catch New Lisbon's Owen Jones as they head to the finish line during the boys 800-meter run at the WIAA Division 3 state track and field championships on Thursday at Veterans Memorial Stadium at UW-La Crosse.

New Lisbon's Jaiden Hart releases an attempt during the girls discus at the WIAA Division 3 state track and field championships on Thursday at Veterans Memorial Stadium at UW-La Crosse.